As passionate Spanish food fans we've travelled extensively across the Iberian peninsula, eating at some of the best restaurants along the way. El Celler de Can Roca, Quique Dacosta, Azurmendi, Akelarre, Martín Berasategui, DiverXo, Etxebarri, Aponiente and even El Bulli back in 2004. Although that's only half the story. You don't really have to be a Michelin star collector to eat very well in Spain. There's great food at every level. Food permeates the whole of society in a way that it doesn't here. Go to the fish section of a Spanish supermarket for example to see the huge amount of seafood everybody eats there. To eat well should be for everyone not just for so called 'foodies'.
We even invited some Spanish chefs here (the Nacho & Friends project) to show our city the finest food Manchester has ever seen. Manchester City manager Pep Guardiola came to one of these events. Sadly it turned out to be the last one. He is famously part of the team behind Tast along with chef Paco Pérez.
Pérez's restaurant Miramar on the Catalan coast has been on my 'to eat list' for some time.
So when I found out that he and Pep Guardiola were opening a restaurant in Manchester, I was genuinely excited. The menu reads very well, I couldn't wait. I marked all the dishes I wanted to try. The only problem was we couldn't get a booking. 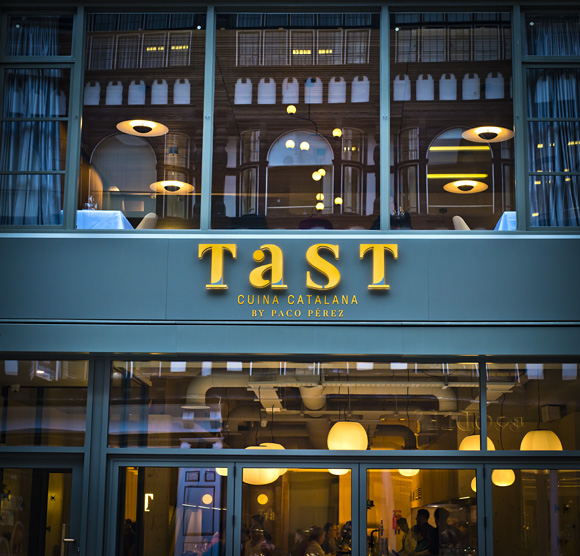 We got a (now extremely rare for me) PR invite. Then the PR company (or the restaurant) changed their minds. A few weeks later they changed their mind again and invited us to a bloggers lunch. Lunching with strangers? Nah you're alright, not for me, these events. (I'm not sure why PR folk still think bloggers have any influence outside of London, they don't).
So we finally made a (paid) booking ourselves. The advantage of making your own booking is that you can order what you want and you can be brutally honest without feeling bad that you're being critical about a restaurant who has just paid for your lunch. To be brutally honest we loved it.
We were greeted by old friend Fernando Marques previously of The Midland Hotel and Mr Coopers. Interestingly he has bought some of his team from The French too. He guided us through the menu.
We've not actually eaten out for some time, I've been so busy travelling on various photo-shoots, so I was here to do it in style for a proper blow out.
To start we had a few items from the Muntandes part of the menu which are highly recommended as they're directly from two Michelin star Miramar.
The highly instagramable Duck 'In Donut (duck liver, chocolate and raspberry, £3.80) I knew I would love these and I did. These foie gras bites are smaller than I anticipated, I could easily polish off an actual full donut sized one. 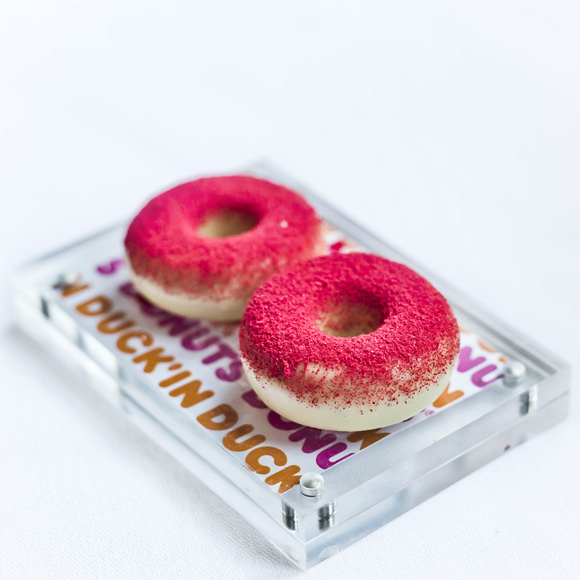 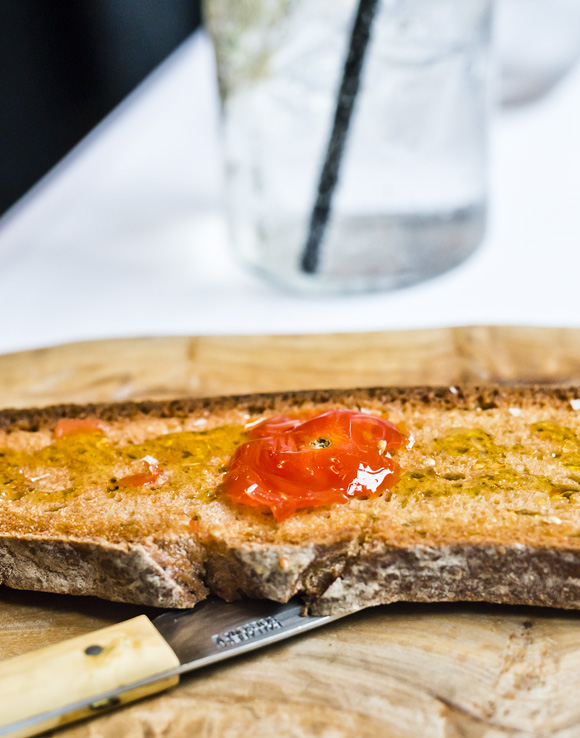 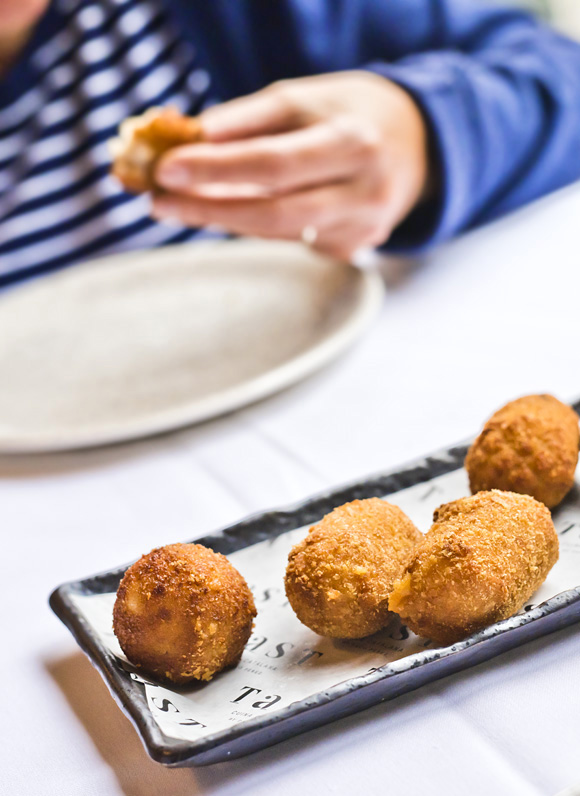 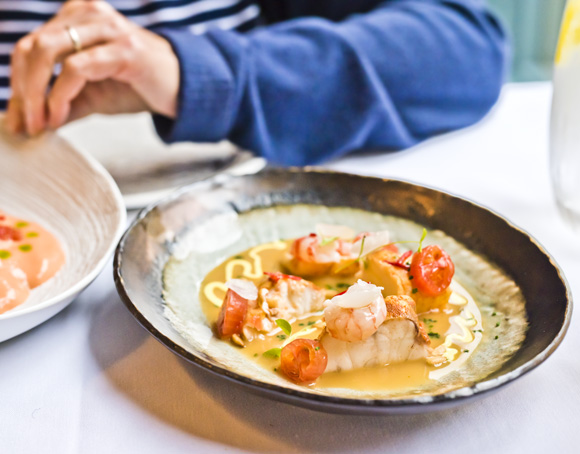 Tomáquet bou de Mar, King crab, tomato, basil (£11). Many of these dishes are not what you expect, this was an espuma, like a cold, fluffy crab foam, another enjoyable if surprising dish. 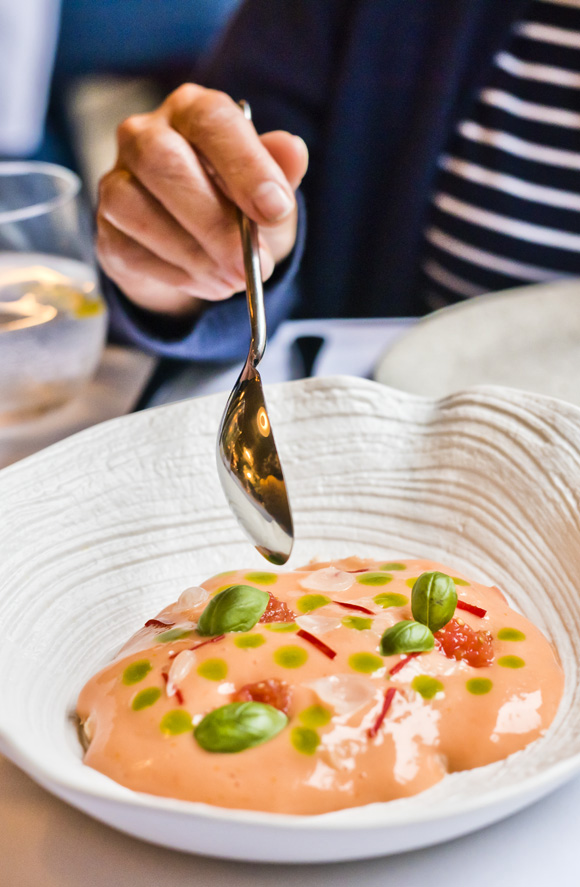 Pop a la Boqueria. Octopus, romesco, potato, oloroso wine (£11) was lovely, with beautiful creamy mash that was just the right texture. One of our star dishes.  Below: Head chef Miquel Villacrosa prepares our octopus. 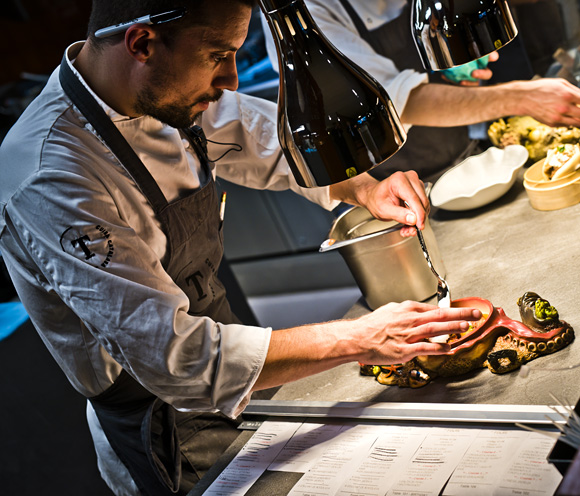 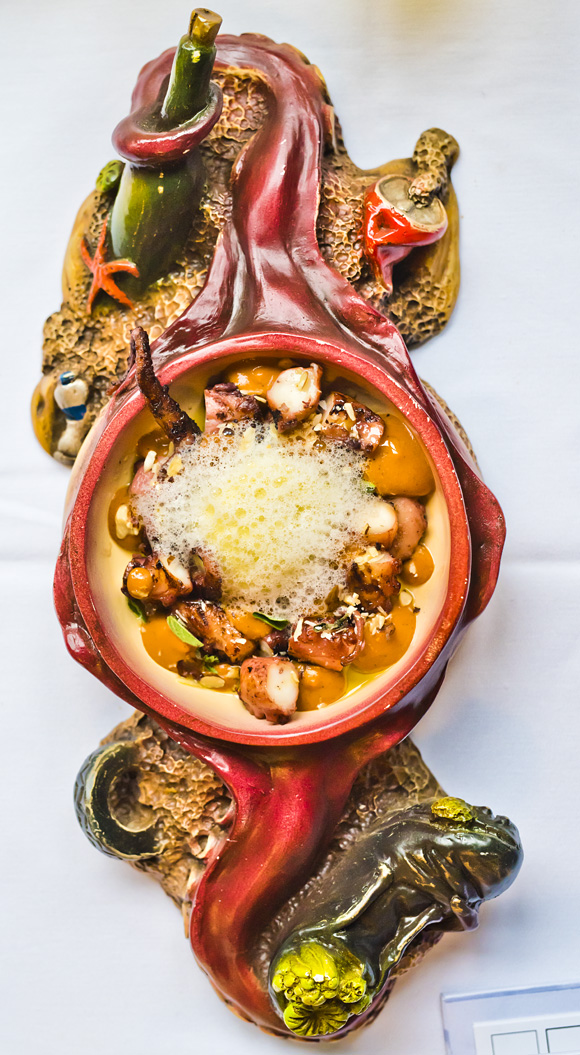 Ou d’Ànec, Xipirons i salsa tartar. Duck egg, baby squid, potato, tartar  sauce. (£10.50). They seem to specialise in dishes like this, I do like them. Fried squid with a fried duck egg that you mix in all together. 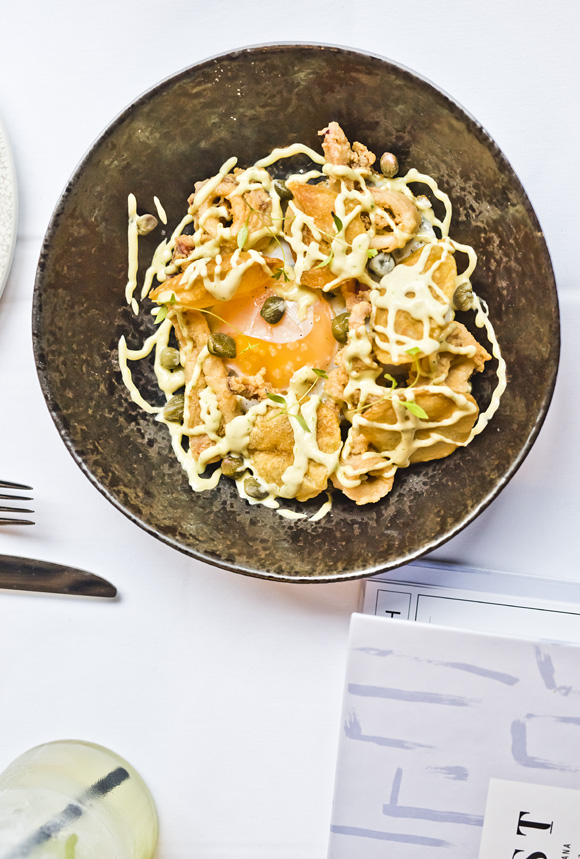 Tempura de Llobregant (£18) Lobster, potatoes, egg, lobster mayo. I like this but expected a little more lobster for the price. Occasionally things can get a little lost in the mix. A few things would be better simplified for me.
Anguila All I Pebre, eel, potato, red chili (£13.80) was another winner with us. I always order eel when I see it. When did you ever see eel on a menu in Manchester? Another real favourite and different from anything else in the city. 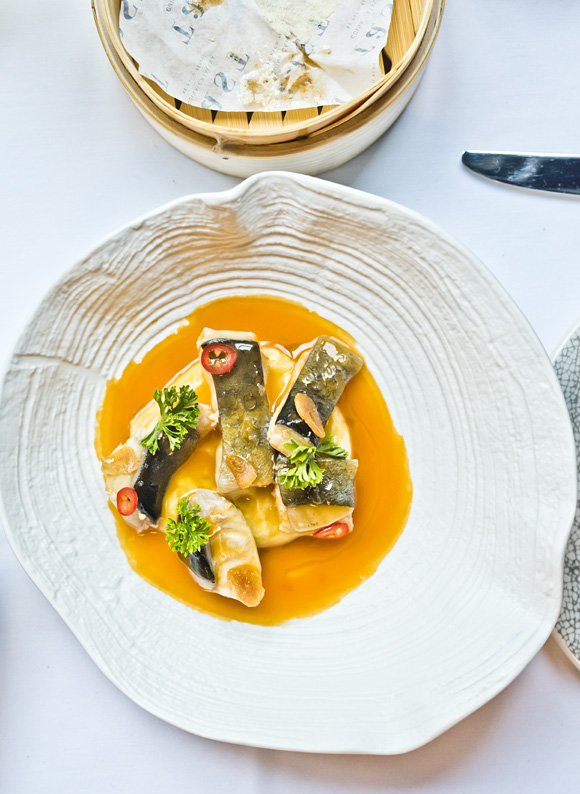 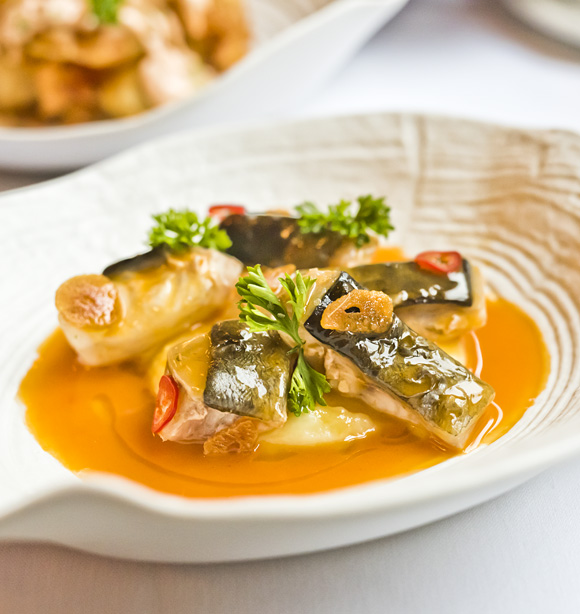 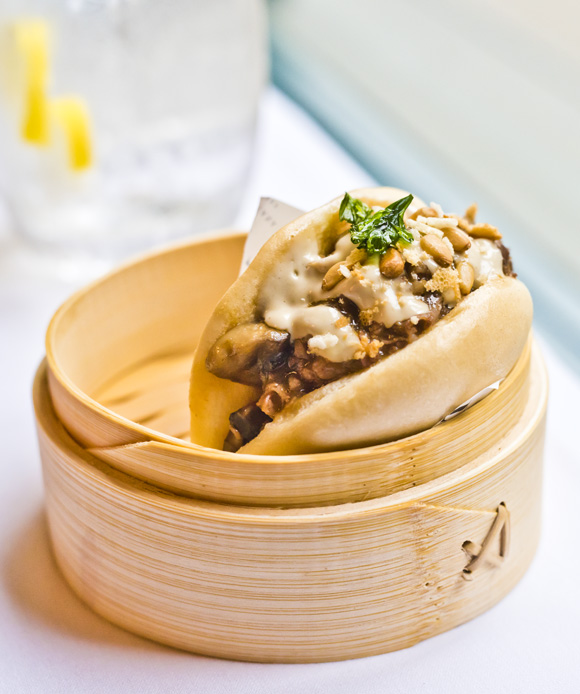 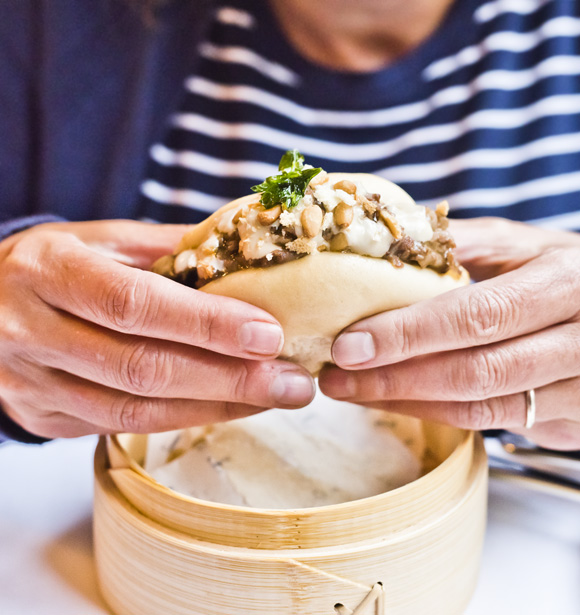 We finished off with two wonderful cocktails, Mrs Bacon had the Park  Güell BCN  Gin, Elderflower,  Suze , Jasmine, Aloe  Vera, Lemon, Tonic,  Ylang Ylang (£9.50) which she described as 'mental'. I loved the Bosc Fashioned Buffalo Trace, Woodford Reserve, Ardbeg, Yellow Chanterelle Mushroom, Truffle Tincture (£9.50). In fact I might even describe it as my favourite cocktail ever, like a walk in a forest with deep woody forest flavours, it works so well. 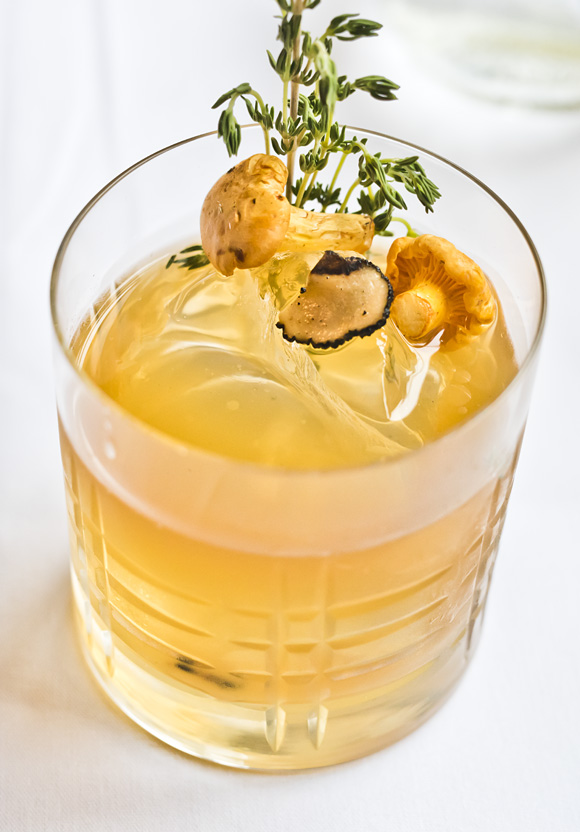 And finally a very decent Crema Catalana (£4) and a Xuixo like a cross between a churro and a doughnut (£4). 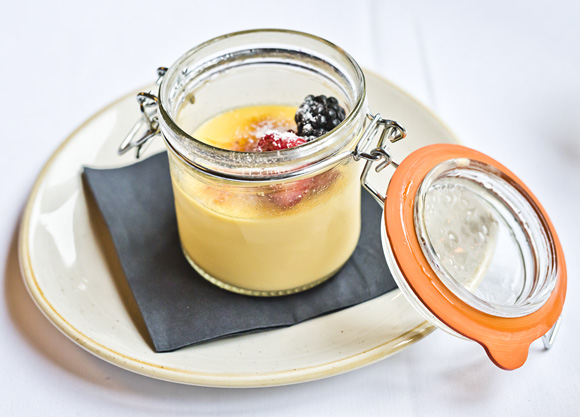 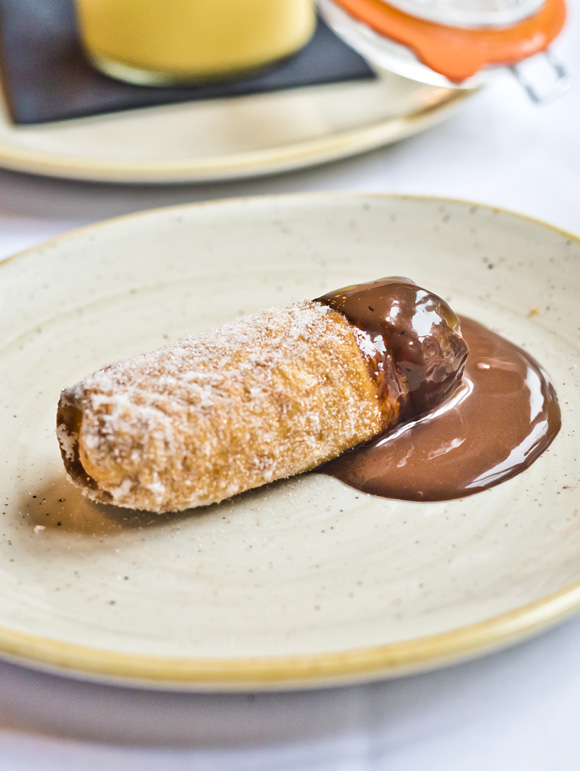 To conclude. We loved Tast. It's not exactly cheap but we did order way more than most people would. Our favourite dishes were the octopus, the eel and the bao brisket along with the Duck 'In Donut and the Sandwich de  Formatge Trufat. For me, they're the next level up from neighbour El Gato Negro (although to be fair I've not returned since they first opened). The menu is interesting, uncompromising and seems to be working right now as weekend bookings are full for weeks. I'd like to see a few more simple dishes where the product is the star like some carabinero prawns for example. However they're created a restaurant that is unlike any other with truly unique dishes.
We plan to return to have their signature rice and their planned tasting menu in the high end dining room when it opens on the third floor in a few months time. The planned top floor will, I imagine have Paco Perez's Miramar dishes in full. I hear a whisper that some famous guest chefs might make an appearance too. As his original restaurant has two stars, surely this must be nailed on for Manchester's first Michelin star since the 1970's? 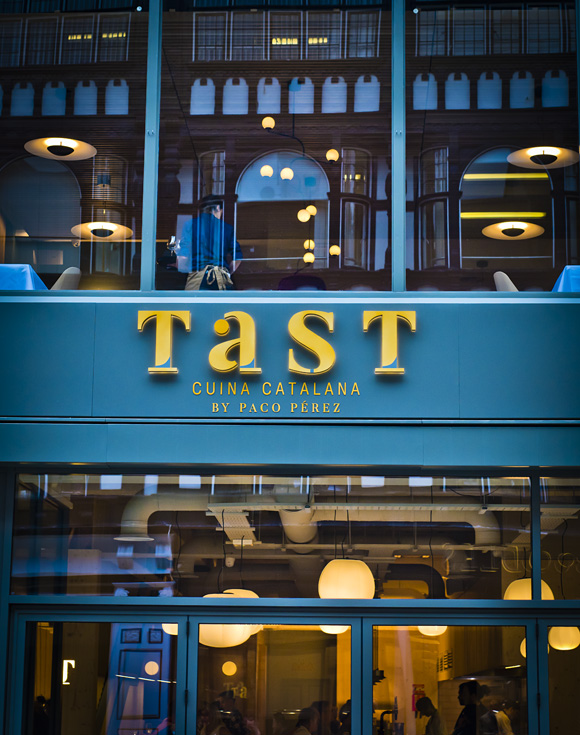 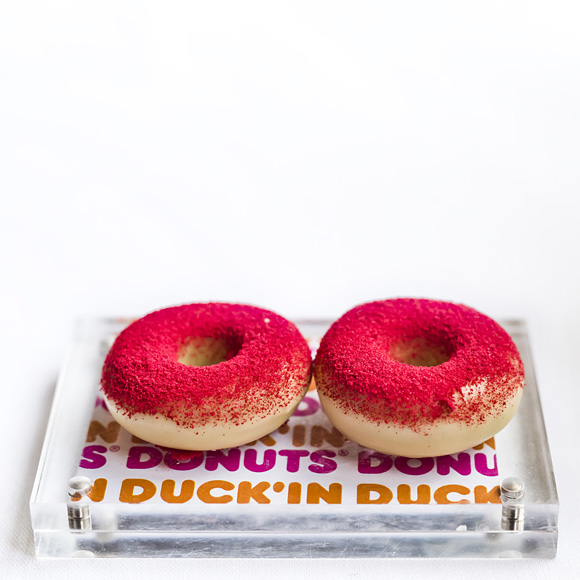 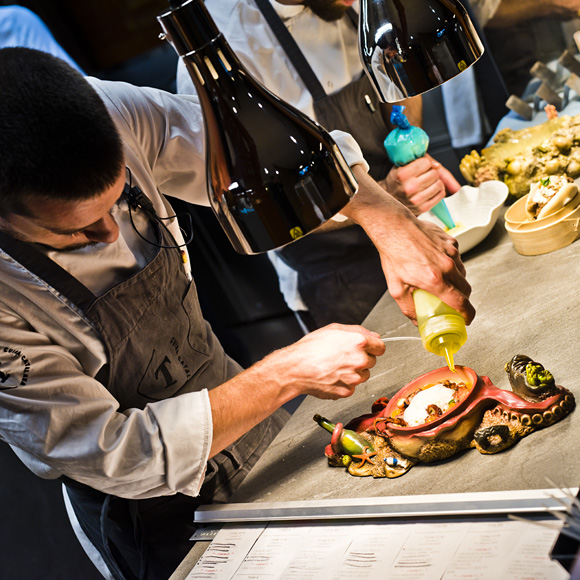 Our bill came to £178 but you might expect to pay about half that if you order a 'normal' amount. About the price of a ticket to see Manchester City play.
My photography website is here.


Follow @Bacononthebeech
Posted by Bacon on the Beech at 18:44 No comments: