Fiona and Joe were amongst the first people to commission me for photography, in fact we were the very first customers when Levanter first opened last May. (I can't believe it's already over a year ago). As they were taking a much deserved break in San Sebastián, I suggested a few places for them to try, one of which is Bar Nestor in the old town. It's a unique little bar, you have to turn up at a certain time (7.15pm) and put your name down on the list. There are two lists, one for steak and the other tortilla. There is a tomato salad too. That's it! I love the idea of a restaurant just doing a few things brilliantly. In a town of brilliance of course the chuleta steak (which comes out at 8pm), is a world beater. They're said to get through 500 steaks a week! I first read about it via Melody & Nemanja, aka, MrTxuleta who is also supplying Volta with their Basque beef. You can read all about that here if you like. 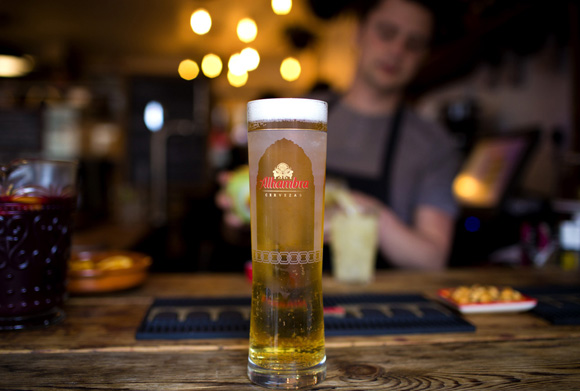 Fiona and Joe returned full of inspiration and with the name of the supplier of the steaks at Bar Nestor, Greys Fine Foods. (Although this weekend it'll be actually MrTxuleta's beef you'll be eating). Joe has also taken to experimenting to perfect a similar tortilla to the one he had there. They invite us up to sample (in exchange for these photos) after seeing we'd already tried the ones at Volta. Funny really that I'd more or less given up steak until recently, now I seem to be eating nothing else! We'd already had a few light fish dishes at The Shoulder up the road so begin with a delicate and lovely Hake (Merluza, sun-dried tomato and salsa, £6). We ate a lot of this in Spain so it's become  a real favourite now. 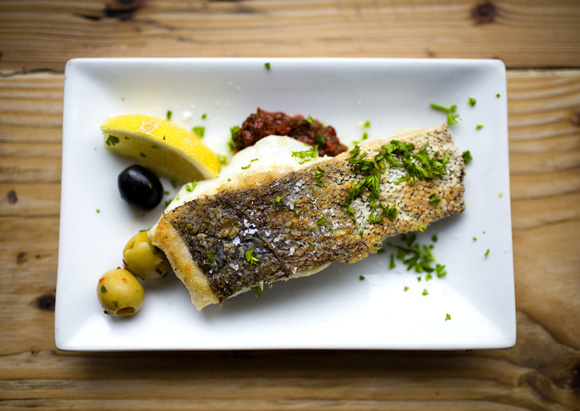 The Tortilla (£4) is absolutely superb. As opposed to the standard dull variety you often find all over Spain, this is much more moist. It's at the top end of saltiness (it just about holds back) but it's the liquid centre and gooey texture which is such a simple joy to eat. The trial and error really paid off. You'll be hard pushed to find a better tortilla in the whole of the UK. What a thing of simple beauty! 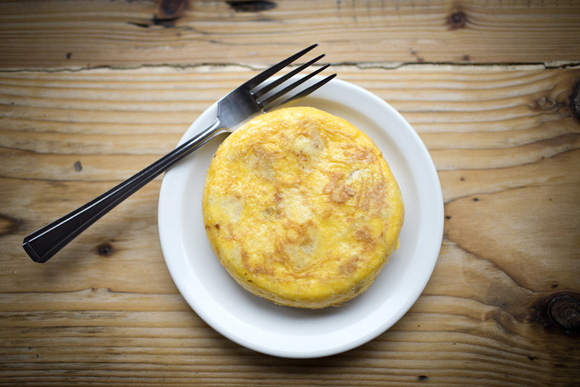 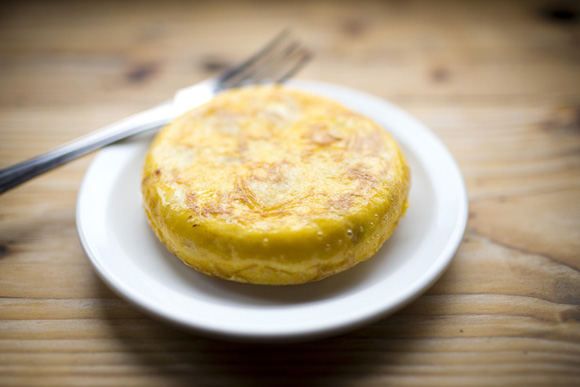 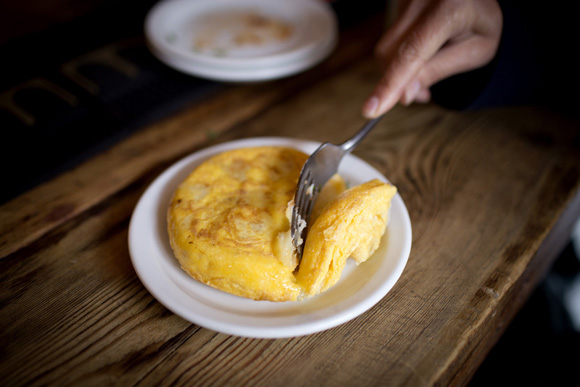 The huge Txuleton from old Galician Dairy cows (at least 8 years old) arrives with some ceremony. Joe is a little disappointed that it's not quite as rare as he's wanted, there is only a minute or so in it, he will take a minute off next time. (We're the happy fat guinea pigs). Although it's still rare enough for most folk and the deep, intense fatty flavour is so prominent. They're selling this at a bargain £45 (with a salad) and it very easily feeds at least two. It's cooked the Bar Nestor way:
"Bring it to room temperature, scoring each side with a fine blade, sea salt both sides & leave for half an hour, letting the salt drawing the moisture out to help get a crispy skin. Cook on a full-heat plancha for 5 minutes each side or 6 minutes if it's an exceptionally big steak (over 4cm thick) but 4cm is optimum size." 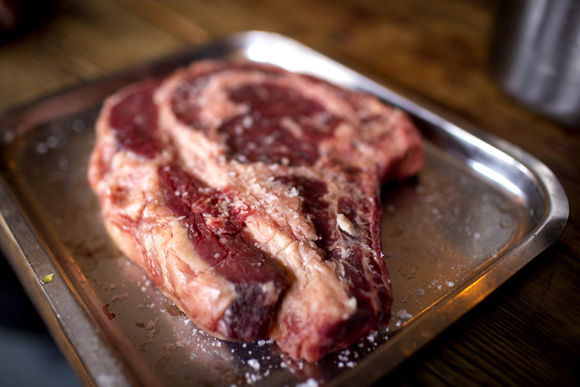 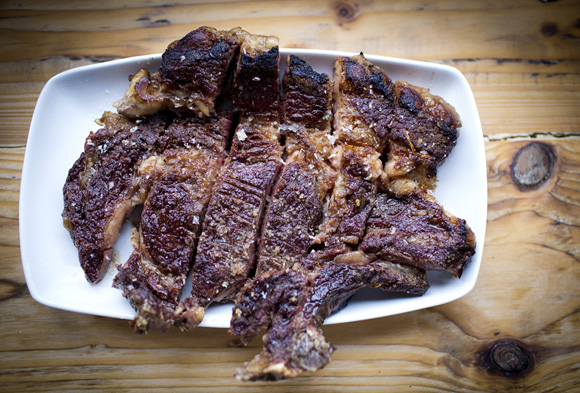 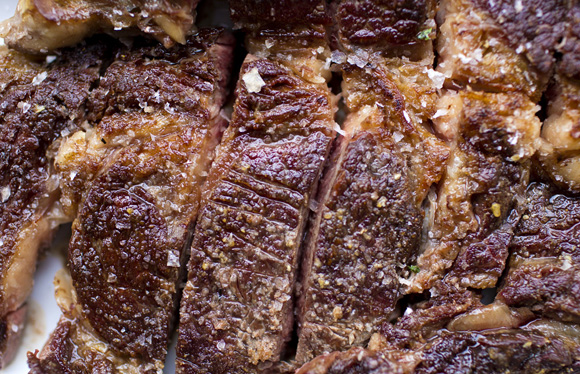 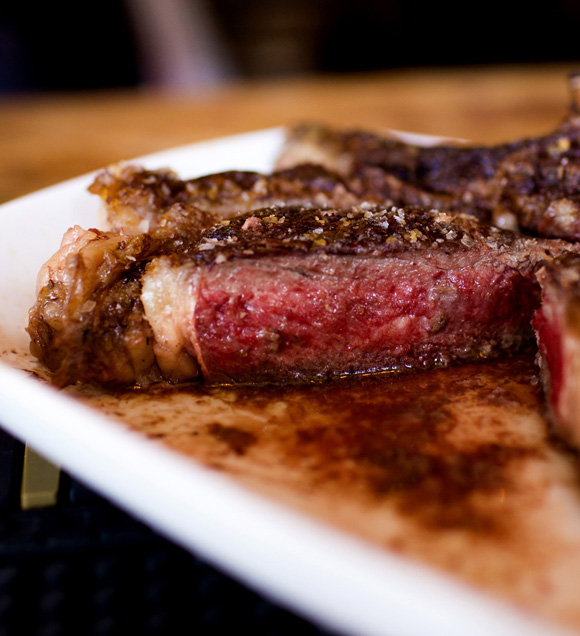 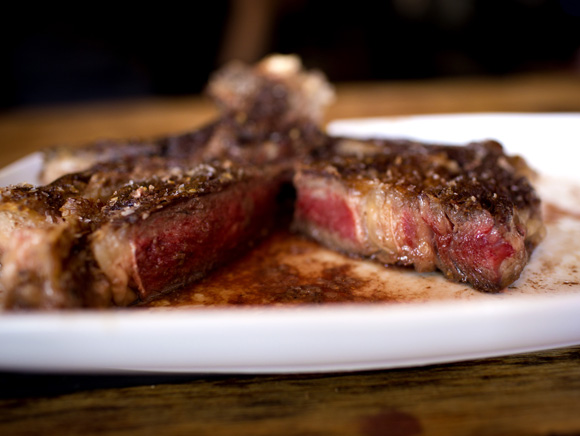 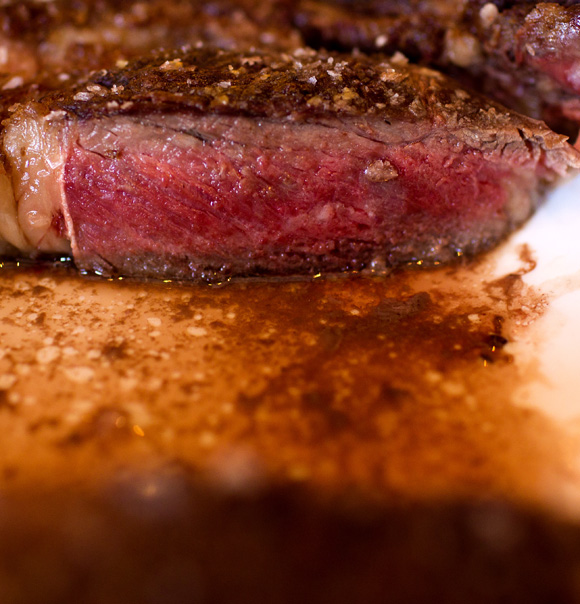 We can't manage it all so we take a load home and make some cracking buttys with mustard that evening. (With some old vines garnacha from the friendly Vineyard Wine Shop next door). 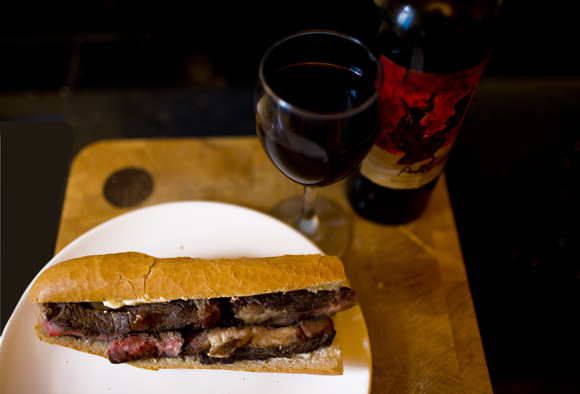 Joe tells us that he plans to make the steak a regular Sunday thing. We think it's amazing that you can actually get the same wonderful produce of San Sebastián over here in Ramsbottom. We always highly rated Levanter but this Basque steak and tortilla are as good as any you can get in Spain, they're on a different level. I'll certainly drink to that ¡Salud! 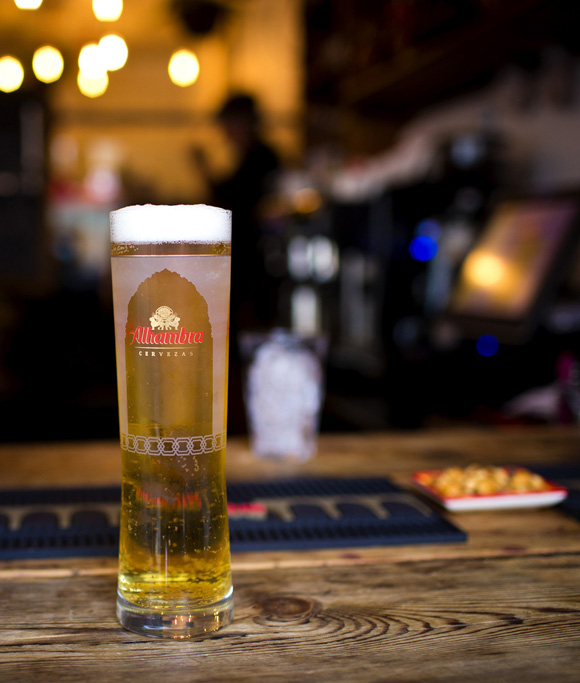 Follow @Bacononthebeech
Posted by Bacon on the Beech at 09:28