The building blocks of any great restaurant are high quality product. You must always start off with that before you do anything else. We've always been impressed with the sheer quality of the produce you get in Spain. The seafood always but the meat too. It was on a trip to Madrid last year that I realised that all these top chefs (Roberto Ruiz of Punto MX and David Muñoz of Street Xo & DiverXo for example) often source their beef from the north of Spain, from Galicia and San Sebastián. We could see why, it has a deeper, fuller flavour to the meat than we're used to in the UK.
So why is nobody using that here? We import food from all over the world so why have I never seen Basque and Galician beef sold as a luxury food stuff in British restaurants? The answer of course is that they are, now. I was coincidentally reading a review of Kitty Fisher's in The Times. Giles Coren talks at length about how good the steak is using 'old Galician milkers'. A bit of internet research came up with the source; Nemanja Borjanovic, also known as MrTxuleta. Not only is he supplying some of London's best restaurants but they're soon to open up their own place; Lurra.
This is all well and good but why does London always have to get the best of everything? Why can't we have it up here for a change?
I talked to Luke at Volta and he seemed very keen on the idea. Like us, Spanish restaurants are a big inspiration for them. The likes of Cal Pep in Barcelona for example was his road to Damscus moment.
In the meantime we went over to Spain, to Asador Etxebarri to taste the famous Chuleta de vaca, their signature Basque steak. I can confirm it is the best we've eaten. (Also we had similar at Ibai in San Sebastián and I believe you can get the same at Bar Nestor in the old town). 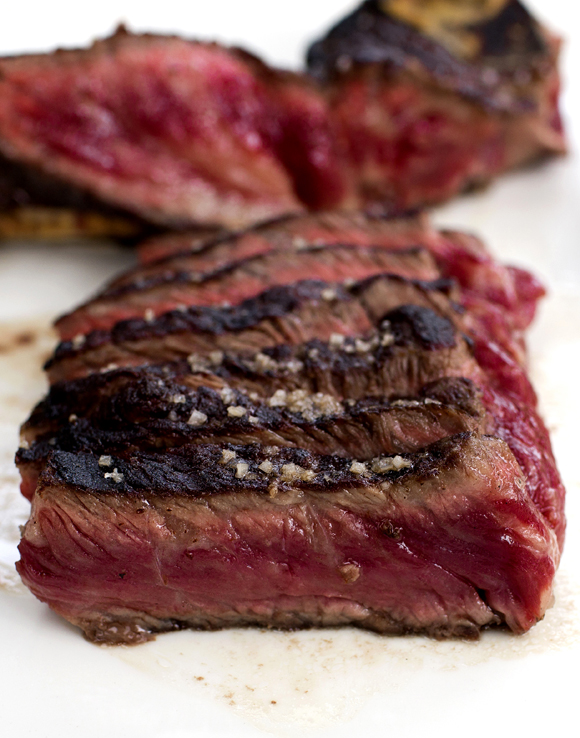 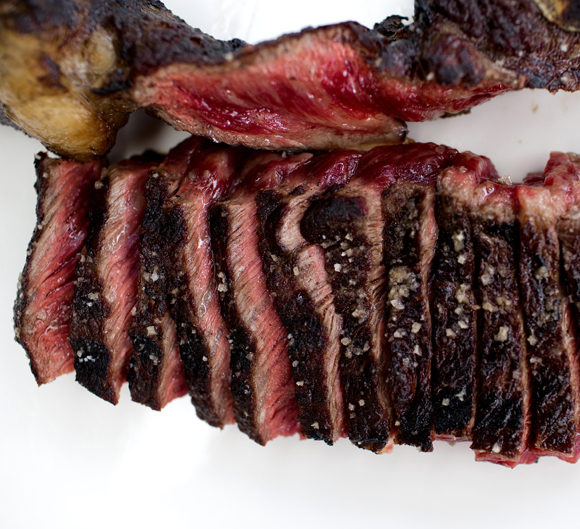 Why is it so good?
One of the differences is down to the age of the animal. In the UK, the slaughter takes place at around 1-2 years old (when it's financially most viable) whereas in the north of Spain, the cows and oxen are around 8 years old even going up to the grand old age of 17. The older meat is much fattier. The retired dairy cows naturally grow fat (it happens to us all) and more fat equals more flavour. Simple.
The beef has landed.
Just smelling the raw meat is beautiful, like a mature cheese it gives off a distinct aroma. Look at that beautiful marbling too. 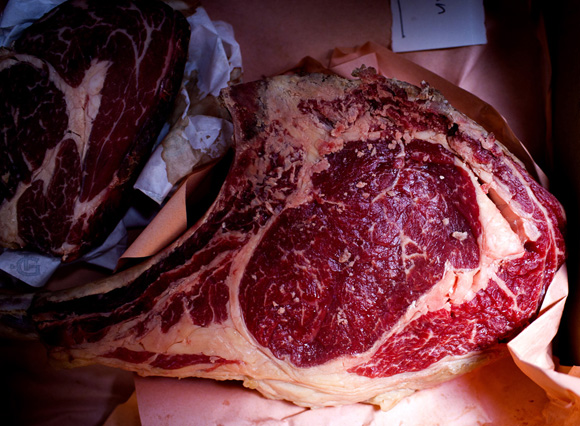 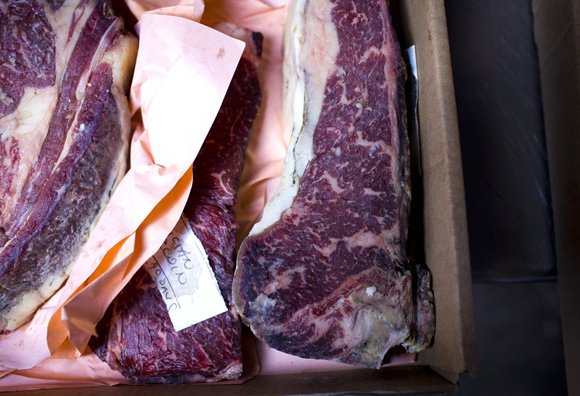 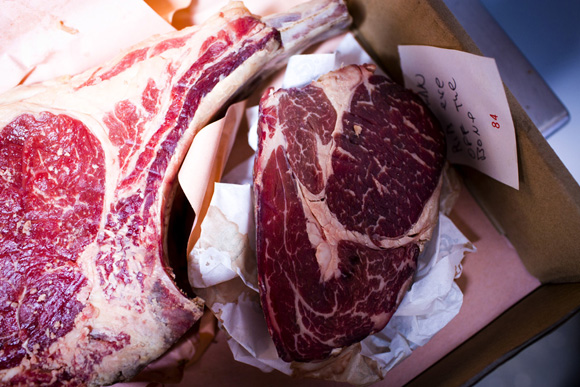 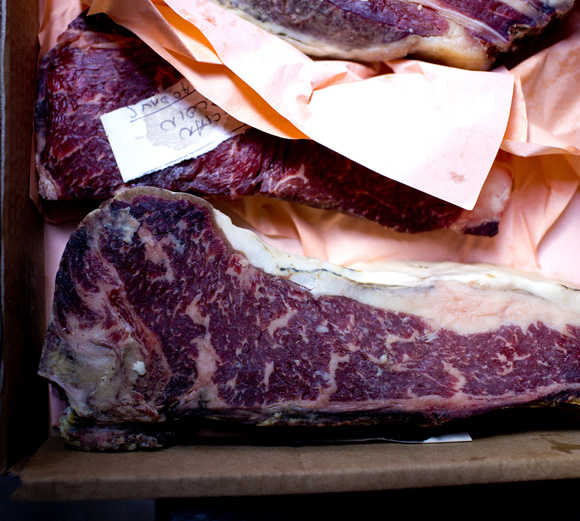 Nemanja Borjanovic is a very busy man but he finds time to zip up to Manchester yesterday morning to bring up some samples which we tasted last night. We have three different cuts. The Txuletón rib eyes (or chuleton) are traditionally served in cider houses (sidrerías or Sagardotegi in Basque) on a sharing platter. There is also a Galician rack and sirloin all served rare of course. 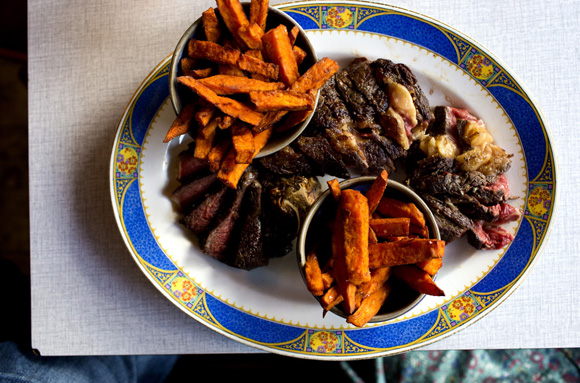 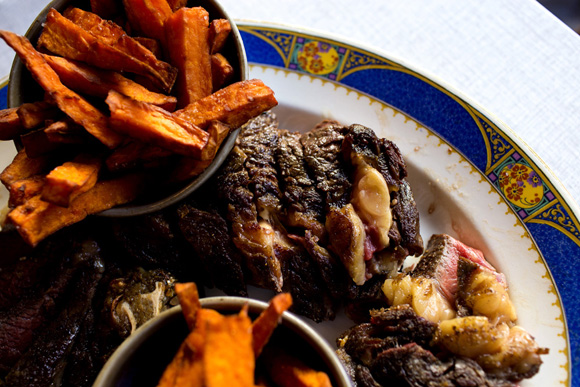 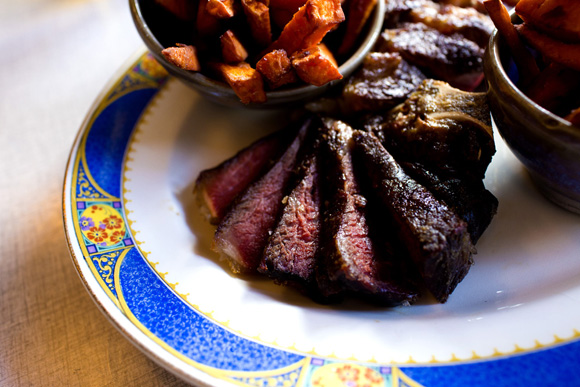 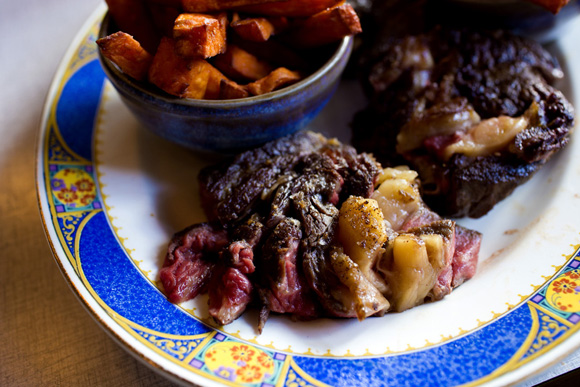 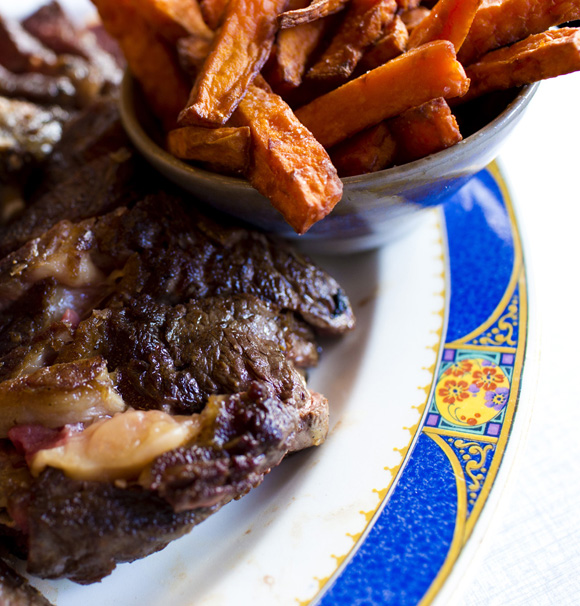 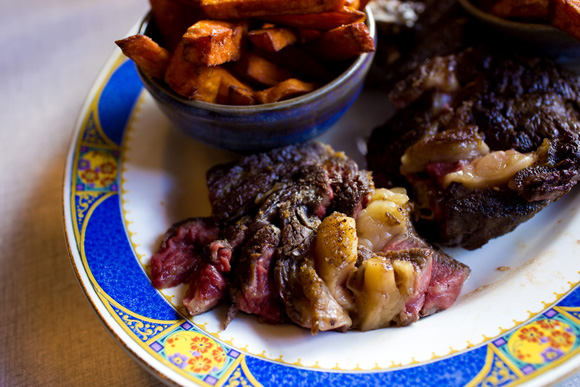 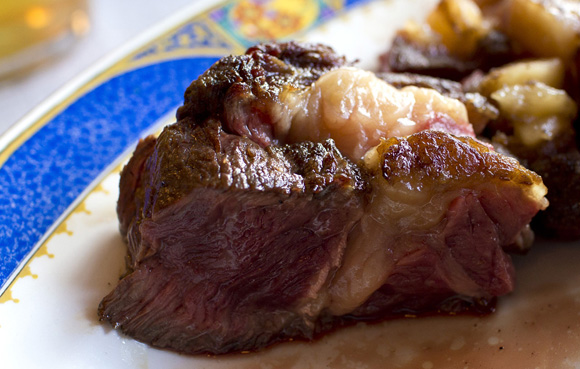 I think our favourite is the Rib eye. One is matured to 20 days which we had 'early', the other is air dried 40 days from a 17 years old retired 'milker'.  The heavily marbled meat is all superb, it's much fattier than the usual British beast. There is a totally different denser flavour dimension in there from all that buttery fat and the maturity of an animal that's lived a full and long life outdoors. It's deep and and earthy with a bit of a chew (not that elastic chew though like you get with cheap steaks) but that real intense primal flavour is what you get. If you're really into your steak you have to try this.

The beef will be served as a Special at Volta, price TBC.

Next time. I source some Carabinero Prawns, the most prized in Spain.

Follow @Bacononthebeech
Posted by Bacon on the Beech at 20:53