It was absolutely imperative that I secured a booking for the new Hawksmoor soft opening. At 50% off the food bill for a few weeks, it was a bargain that I couldn't afford to miss out on. I like the way they organised this initial bedding in period. Instead of inviting the press, bloggers, blaggers and the usual suspects for a big freebie, they opened the booking via email for everyone to get an equal chance of a booking. As everyone who gets in is paying half price on the food nobody can accuse anyone of praising for free food. They had about two thousand emails initially. I heard nothing so presumed I'd not got in. I fired off another email asking for any weekday lunch early doors which we eventually got. Mrs B even took the afternoon off work. 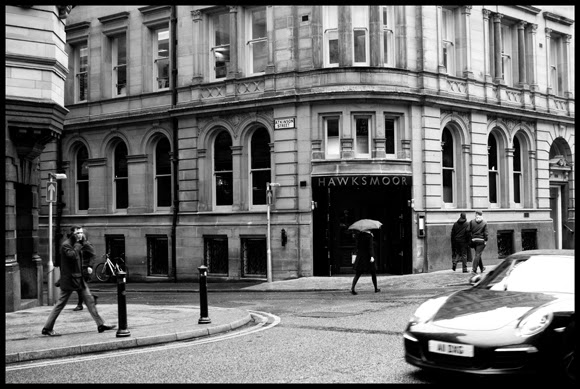 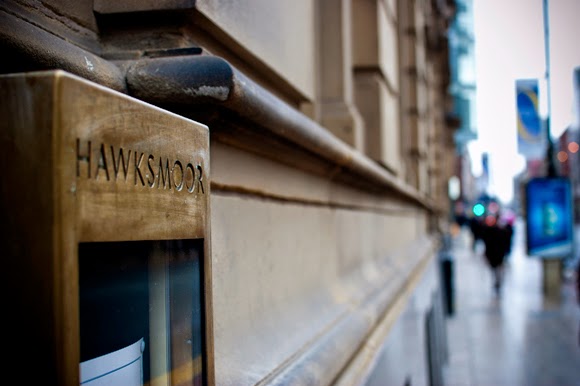 One thing I've learnt from reviewing so many restaurants on here for the last few years is to try and not second guess a restaurant. In this case Hawksmoor has been so anticipated it'd be easy to see it not living up to the hype as has happened to so many others (Reds True BBQ was in hindsight, a disappointment, we've never returned). 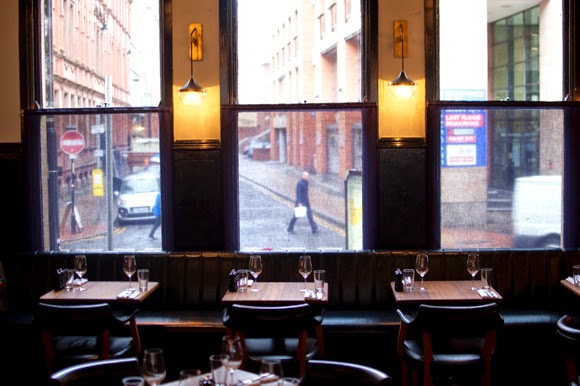 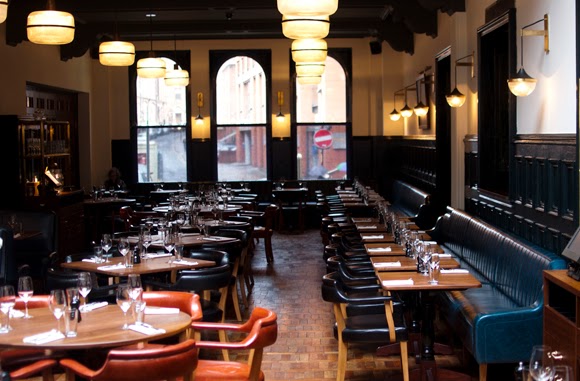 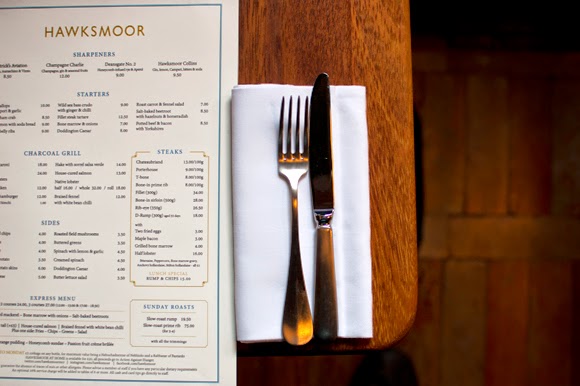 However everything here is absolutely fantastic on our visit. The food is excellent, completely faultless, the service is spot on too. We even love the beautiful interior. It feels like it's been here for years but the floor and wooden panels are actually reclaimed. (The tables are a little too close together for my liking but this will never bother us as we rarely eat out at peak times). 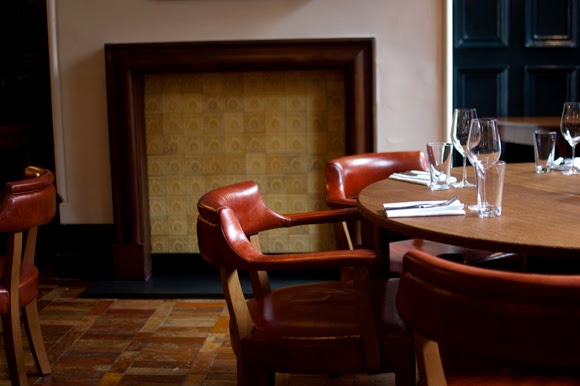 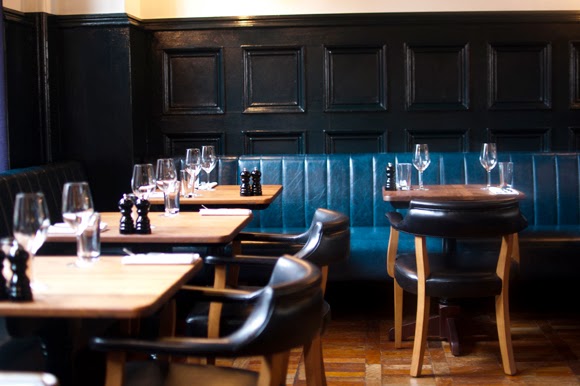 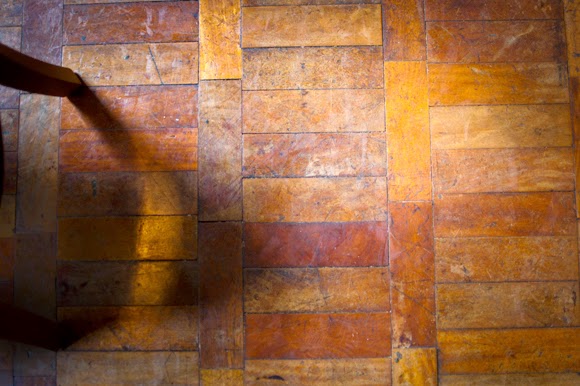 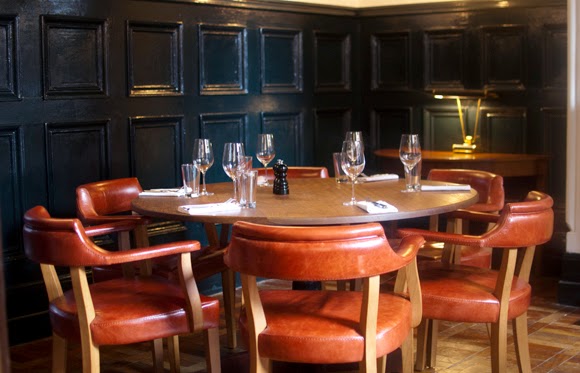 We begin with some pre starter bar snacks.
Chicken Poutine. I originally wanted their pig's head poutine as I'd seen a photo in the local press. It turns out that this was from one of their London branches. No matter, I'm so glad we order it. It's bloody gorgeous. That taste of oily hot chicken skin mixed with melting cheese. I gobble the lot down. 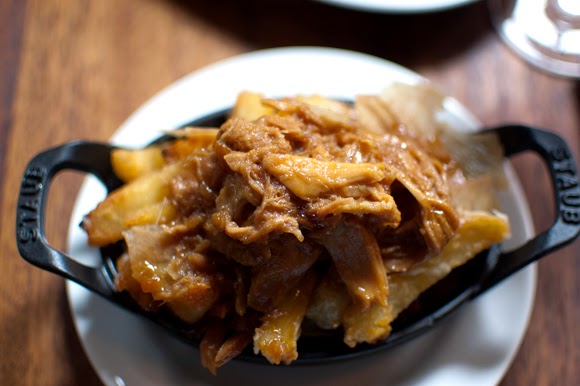 The Fried Oysters are good too although we'd mistakenly thought we were getting fresh oysters. It would be nice to see these in Manchester too. 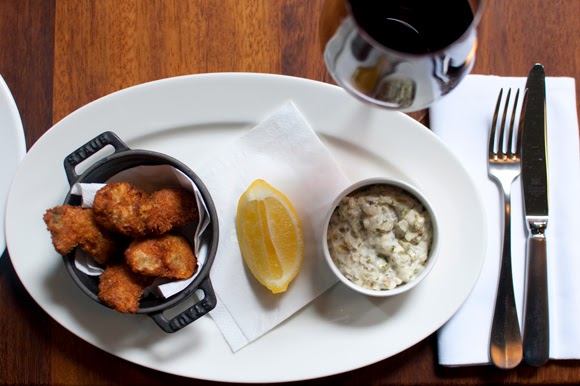 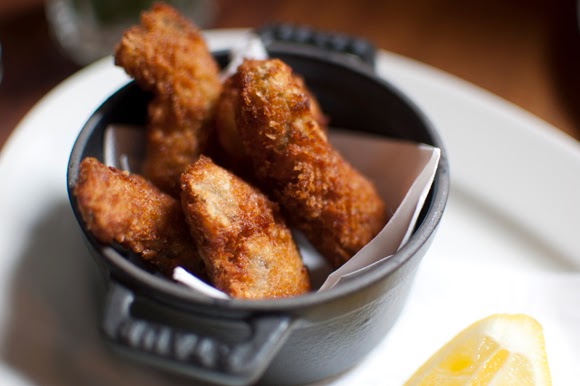 Starters proper are Fillet Steak Tartare (£12.50) and Potted Brixham Crab (£8.50). No complaints here. The fresh and clean steak tartare is a real favourite with just the right amount of seasoning but the crab is no poor relation either. 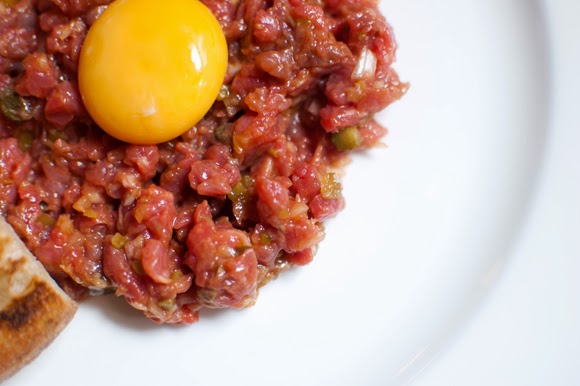 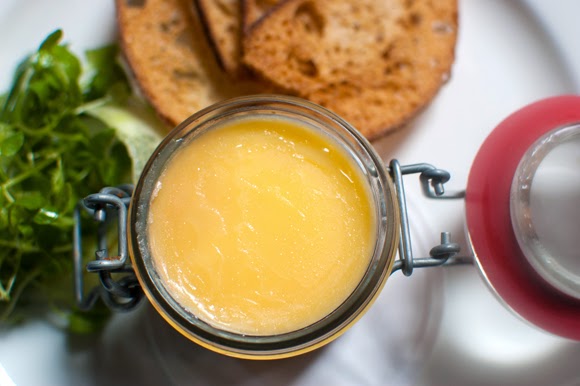 After much research I decide on the Porterhouse Steak which is priced by weight (£9 per 100g). It's a bit of a shock at first when it arrives. It's like we've ordered the whole bloody cow, it's absolutely massive! The Porterhouse is like an oversized T bone, you get two separate cuts of steak, the sirloin and the fillet steak are on either side of the bone. I take a big chunk of the fillet, and add some of our Grilled Bone Marrow. (£4) and a dribble of wonderful bone marrow gravy (all sauces are £1, we also have Anchovy Hollandaise and Béarnaise). It is completely superb, a perfect steak, easily the finest we've had in Britain let alone Manchester with just the perfect amount of fat for the flavour. It's easy to compare and contrast the cuts, surprisingly we both prefer the fillet over the slightly fattier strip. 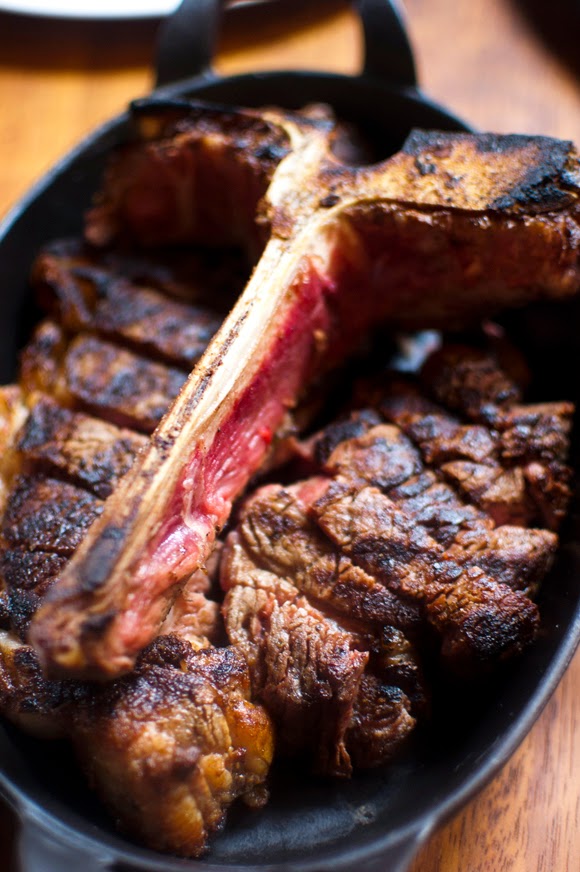 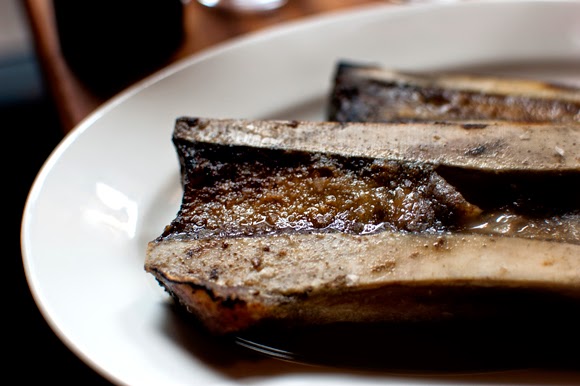 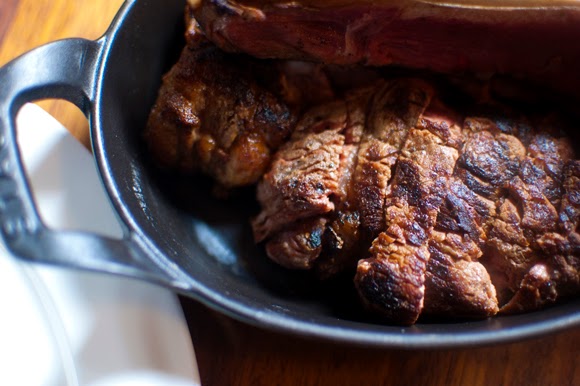 The meat is supplied by the Ginger Pig.
It will be interesting to compare this steak to the one we will be having at Asador Etxebarri in the Basque country in a couple of months. It's believed be many to be the best BBQ restaurant in the world. (I'd also like to try the steak at Kitty Fisher's in London which is also sourced from the Basque country). We don't often eat steak in the UK as it's more often than not a disappointment. Not in this case. 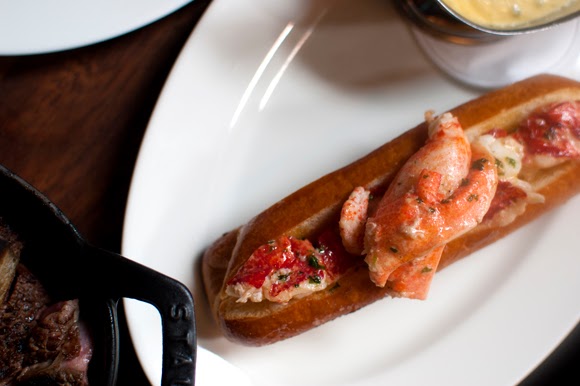 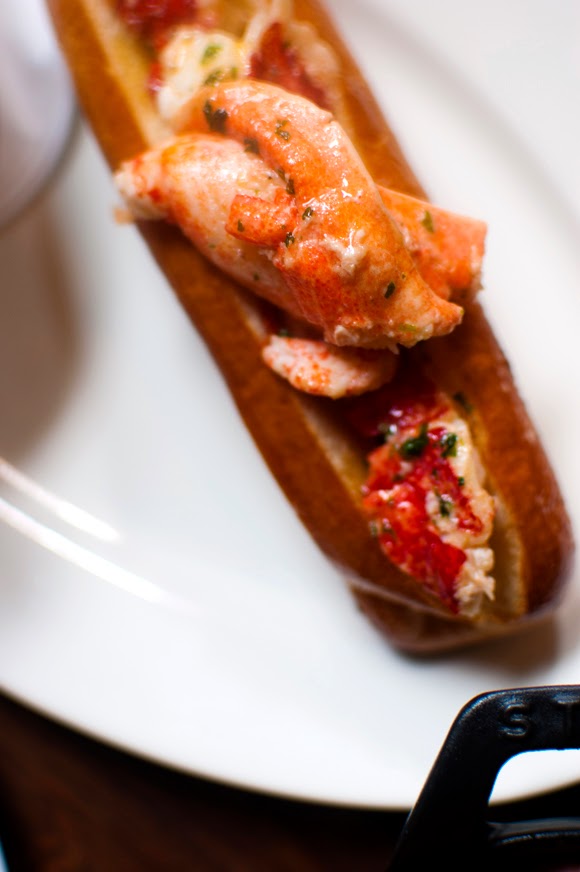 The lobster roll  (£18) is beautiful too, even the bread they're using for this is quality. We're very impressed but starting to fade now, we ask for a doggy bag. The remaining steak feeds us for lunch next day and we boil up the bone for stock! We can only pathetically manage ice cream for pud and that's a struggle. 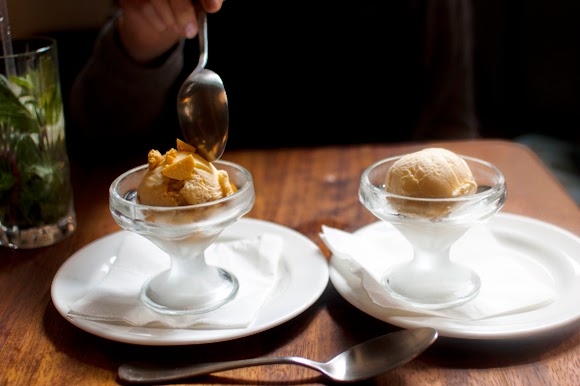 Hawksmoor judging it from our experience is the next level up. It's London levels of food and service. (Living Ventures restaurants and the like should take a long look at Hawksmoor as I don't believe they have anything to match it food wise apart from Manchester House).
The only thing is that Hawksmoor maintains those London prices to match. I must admit to being shocked at the price of our Porterhouse. For £85.50 I'd expect it to be the best steak I've eaten in Britain!
Our original bill would have come to £176 for two which is pretty high but we had ordered a huge amount of food as we had wanted to get 'our moneys worth' of discount. The final tally was £96.
In the end you must always pay for the best quality. Who knows if Manchester is ready for these London prices? Previous evidence would suggest not but we've never had a Hawksmoor before. The only thing I can say for sure is that we thought our lunch was completely brilliant. It'll just take us a few months to save up for our return trip. 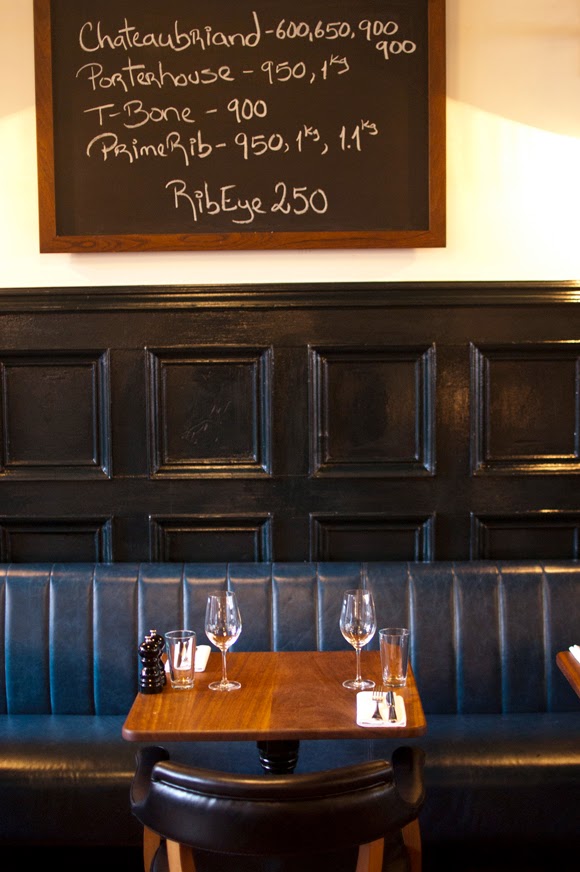 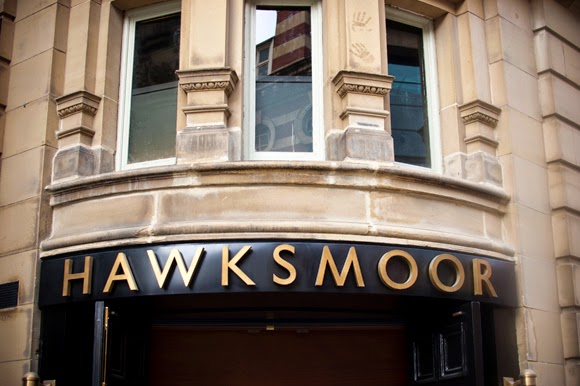 Follow @Bacononthebeech
Posted by Bacon on the Beech at 19:02