Central London is completely manic in December, crammed with Christmas shoppers and tourists like us. Folk were queuing to get into Garfunkel's on the Saturday evening that we were there. Imagine that; Garfunkel's?! I know not everyone is as food obsessed as we are. But there's just no reason to go somewhere so poor when there is so much choice at every level. Even if you're on a strict budget, you can still eat very well in London. It's not like there's a shortage of websites telling you where to go.
The morning after our meal at Kitchen Table, we walk out of our hotel in St Martins Lane and straight into Dishoom. I had thought it'd be a hard sell for Mrs Bacon and our two pals but they are just happy for me to take the lead. Mrs B is initially doubtful; are we really having curry for breakfast?
No we're not. Dishoom is another perfect example of a small London chain like Wahaca where things are done properly and with care. And they do a fine breakfast. 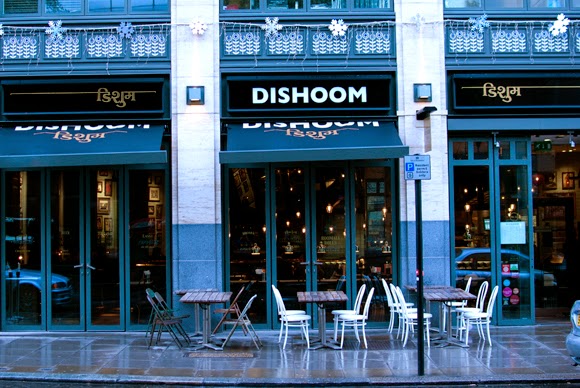 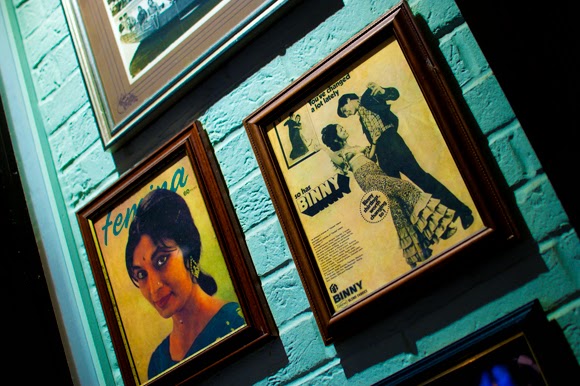 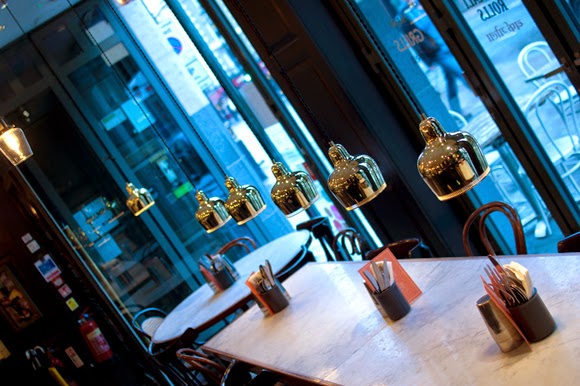 It's a brasserie in the style of old colonial Bombay cafés. We happily bag a booth and have a look at the menu. No need for me, I already know I'm having the famous bacon and egg naan. I have to say everything else at Dishoom is bang on too. Perhaps if you're being picky, you may get slightly irritated at being asked if everything is ok as we are, three times. This really doesn't bother me, better that than poor, rude or slow service. The orange juice is proper; freshly squeezed and even the coffee is pretty good (usually a rarity, even in good restaurants). 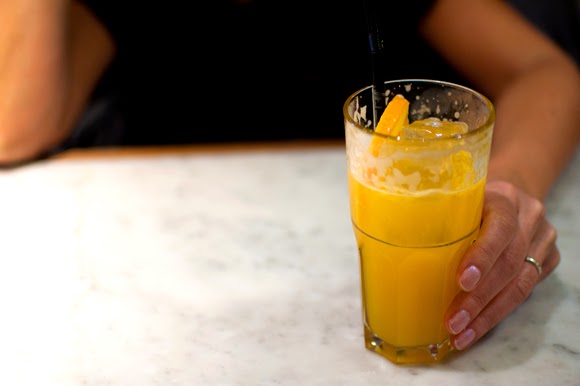 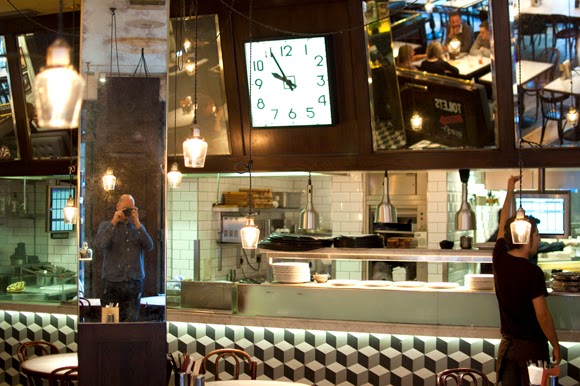 Of course, the fabled Bacon and Egg Naan Roll (£6.50) doesn't disappoint. The bread is lovely, freshly baked, thin, warm and fluffy with crunchy charcoal bits from the tandoori oven. As a tomato sauce replacement, you have a small pot of spicy tomato relish which works brilliantly. 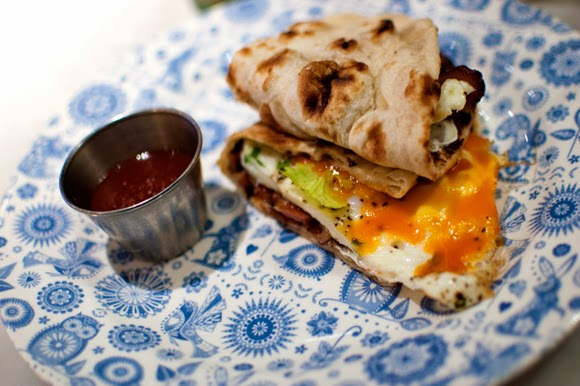 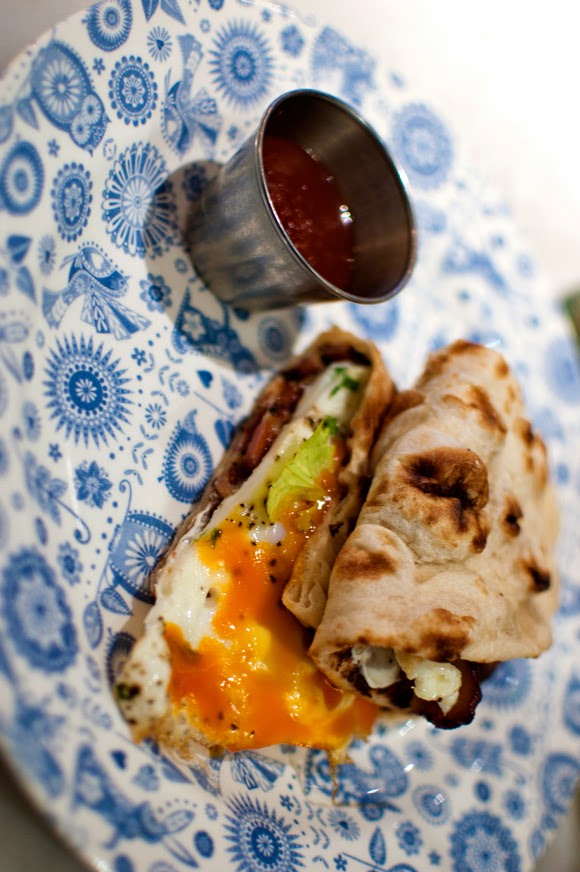 Two of my favourite things in the world (in any sensible person's world really), bacon butties and Indian naan bread have combined to devastating effect. I wish I could eat one now. But I'm on a self imposed post Christmas near starvation diet.
I have nothing but good things to say about Dishoom. It's as good as everyone says and it won't break the bank. There's simply no need to go to awful chains like Garfunkel's when there are places like Dishoom about. And I'm still dreaming about that bacon and egg naan. 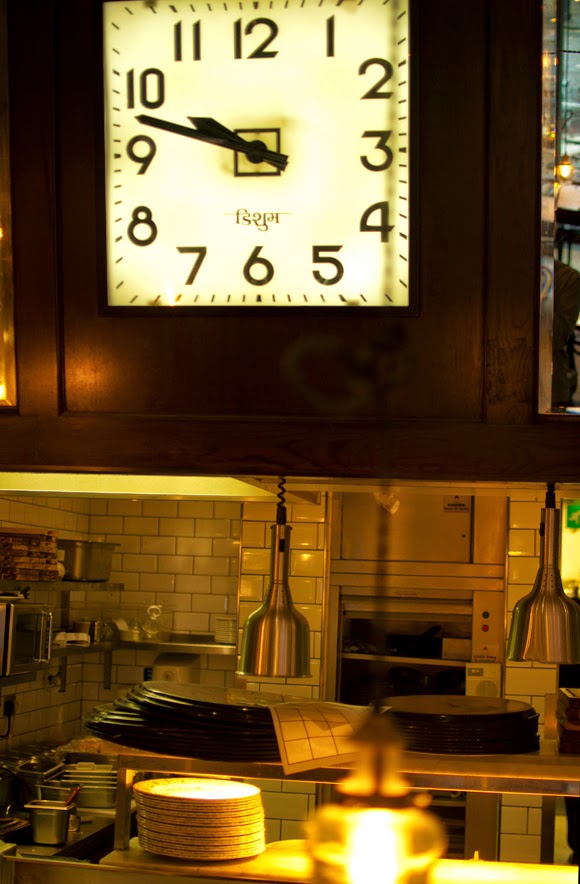 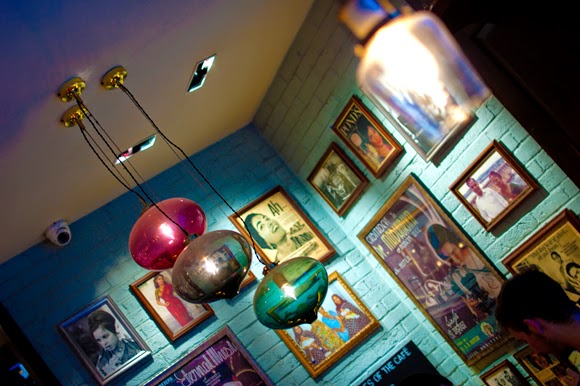 Follow @Bacononthebeech
Posted by Bacon on the Beech at 19:28