I'm still buzzing after our dinner at Lake Road Kitchen in Ambleside, over a week ago. We had planned to just visit Old Stamp House and maybe have a light tea in a pub later on that evening. Then I got a message from someone in the industry recommending it and he really knows his onions.
Well travelled, knowledgeable food blogger Cumbriafoodie raved about it too, so I knew we'd have to try and get a reservation even if it meant doing two taster menus in one day and breaking our budget. The search for better and better restaurants becomes like a ridiculous never ending obsession and the more it continues, the less satisfied you become with most places closer to home. 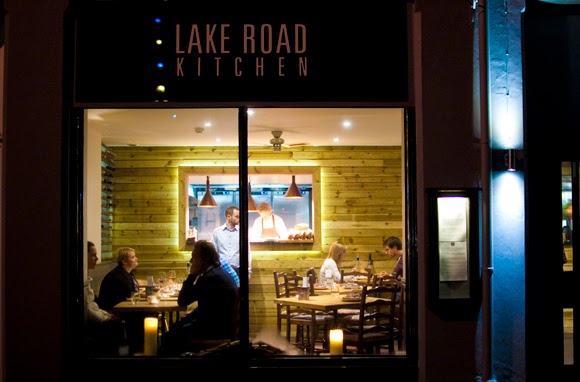 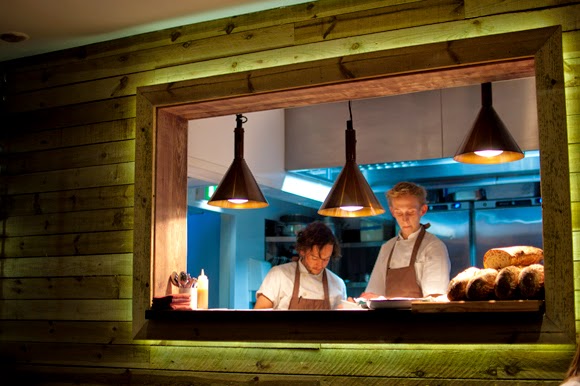 I'm so glad we pushed the boat out. It turned out to be a very inspiring trip. Along with the Man Behind the Curtain in Leeds, it was the most exciting find of the year for us. This is interesting in itself, as in some ways they're polar opposites in style. But we loved them both.
If you put a gun to my head and asked me what I'd thought about foraging before this meal, I'd have said that in all honesty, I couldn't care less. I'm just bothered about what's on my plate and how delicious it is. But listening to head chef James Cross talk so passionately about his early morning foraging trips out on beaches and forests, it would take a complete cynic not to be impressed. This 'North European' style has a real emphasis on using as much quality local product and foraging where possible. World famous chef Rene Redzepi has turned this into an all encompassing philosophy.
James has worked (sometimes 100 hour weeks he told me) at Noma and at Per Se in New York. Both feature highly on foodies bucket lists as I'm sure you know. And that experience brings so much knowledge, work ethic and passion which is very evident when it comes to his style of cooking. 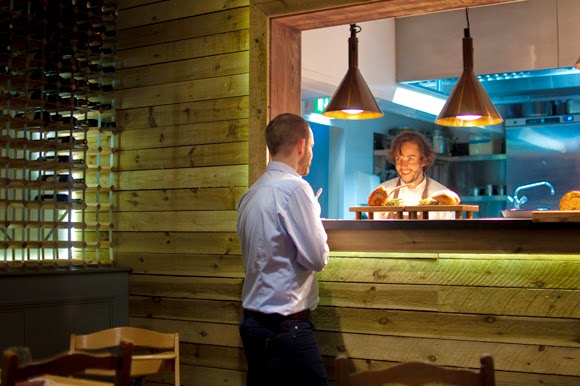 But less of the waffle, what about the food? We agreed on a taster menu which was priced at £65 each. We just sat back and the courses kept on coming for the next three hours. (Sometimes a little slowly but I'm notoriously light on patience and there's just the two of them cooking).
A large part of the whole experience was chatting with the staff who were so friendly and extremely knowledgeable, especially manager George Norrie. Honestly, these guys together in my humble opinion could go far. This is just the beginning for them. 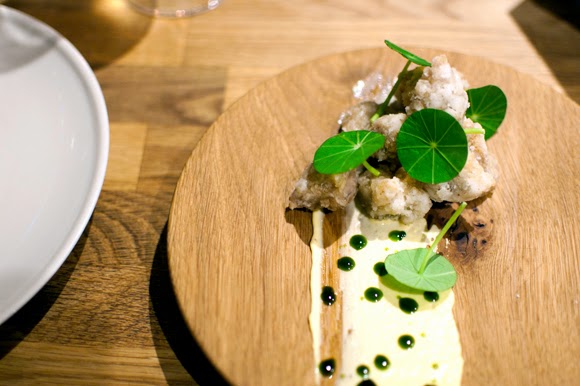 To start, Buttermilk Fried Guinea Hen, charred romaine, Caesar sauce. Nice little juicy chicken bites, full of flavour. Enjoyable but nothing too much to get excited about. Like a very superior version of something you might find in the Northern Quarter but so much better. Then the bread arrived. Man, was it good. 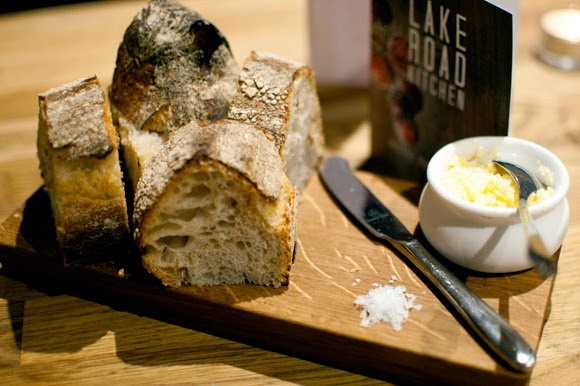 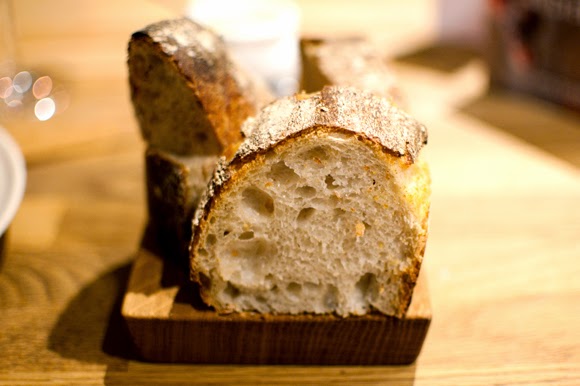 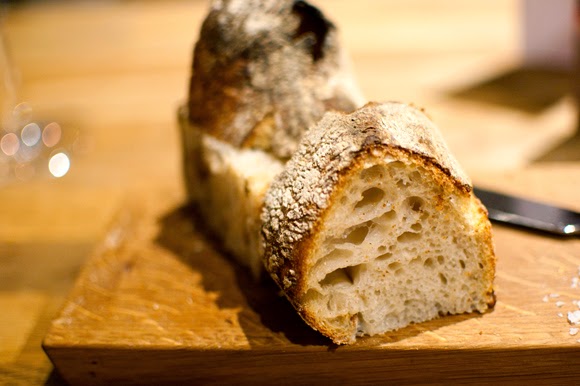 Home-made of course, they explained it was made using a sourdough technique. (But it's not actually sourdough). It's as fine as any I've had in Michelin star restaurants. I always judge a restaurant by the bread they serve and this is simply world class. The texture of it, springy and airy with a lovely rich crunchy crust. Naturally I devoured the lot and had seconds.
Raw and Cured Norwegian Salmon, Tartare, Yoghurt, Rye, Wood Sorrel, so fresh and clean and delicate, the quality of the raw salmon really shines through. The product really is king at this place with an obsessive attention to detail and a demand for the very highest quality. You might expect every decent restaurant is like that but it's not always the case. 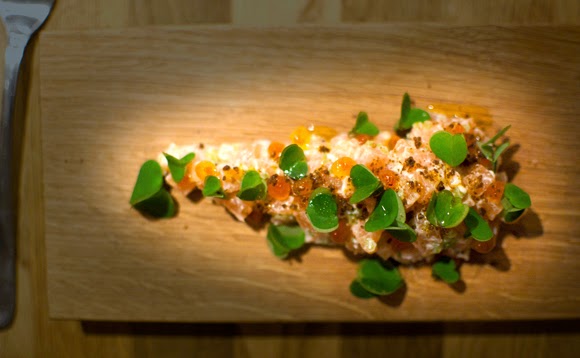 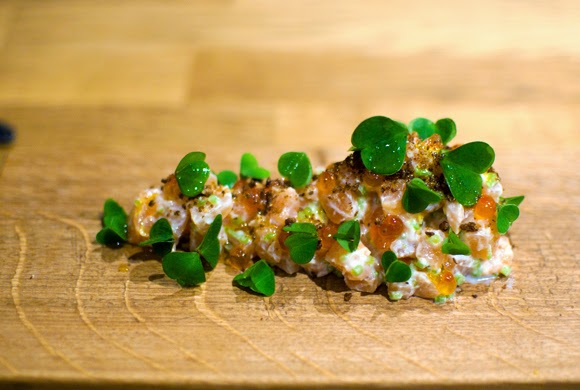 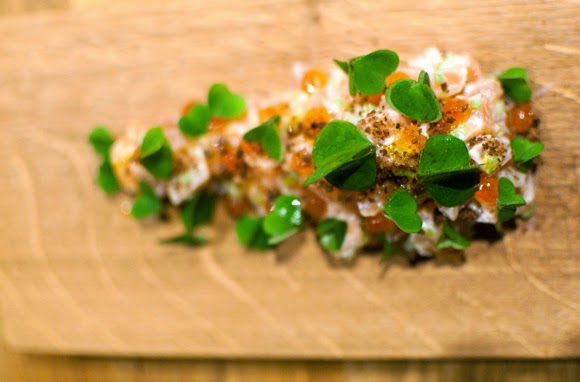 Roasted organic carrot, buckwheat truffled sheep's yoghurt, pickles, sheep sorrel. Inspired by Noma I'm guessing, where a 'vegetable can be the 'star of the show'. Yeah it's just a carrot, some might say, but it's a mighty fine one. I can appreciate a dish like this but can I really love it? Possibly not. Mrs B did though. 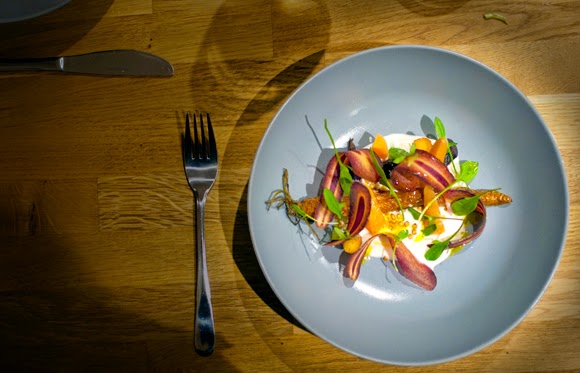 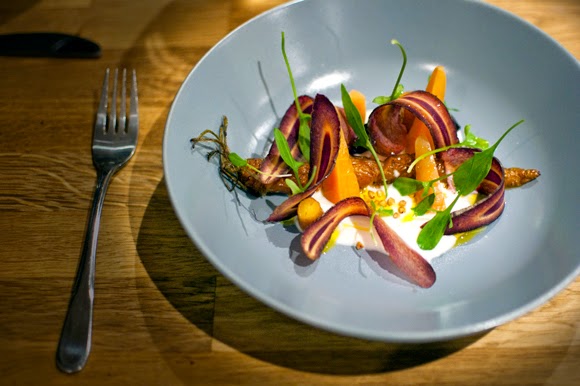 Slow Cooked Octopus was a lovely dish, not one iota of rubberyness, the tentacles were as soft and tender as you could imagine. 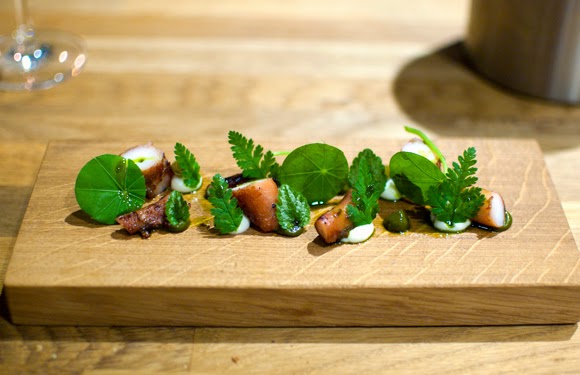 Everything was great so far, but it wasn't until the Scallop Mornay arrived that we really were knocked off our feet. The actual large scallop itself was so good. We were deep in Michelin star territory now with this twist on the classic dish. We were genuinely sad when it was over. 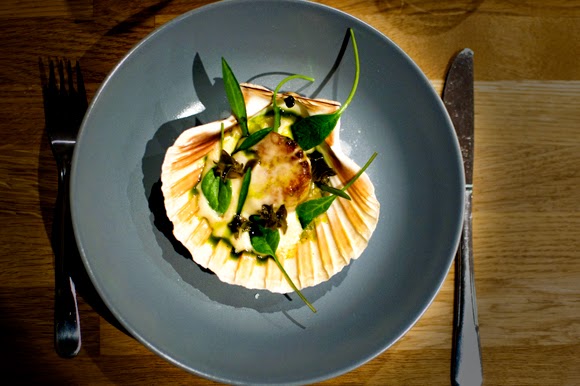 We continued with The Last Cep of the season. Oh. My. God. They'd foraged this themselves especially for us. How impressive is that? It's all part of the story of the dish. This is what you're paying for when you eat somewhere like this. (And it's a bargain too right now).
The mushroom was so beautiful, soft and full of deep woodland flavour, with a rich sticky, meaty sauce, and the duck egg too. Wow! One of the finest dishes we've eaten all year. 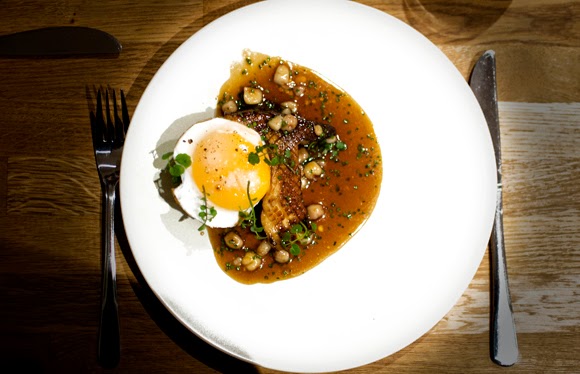 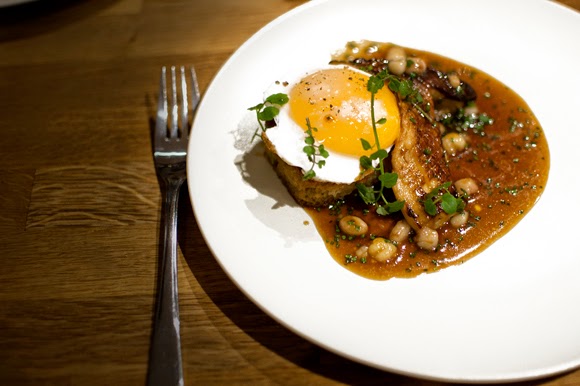 Strangely, the Aged Saddleback Pork dish next, was a disappointment. The texture was all wrong, too tough with very little flavour. The only miss-step of the night. But they've not been open that long, it's still a very high hit rate. 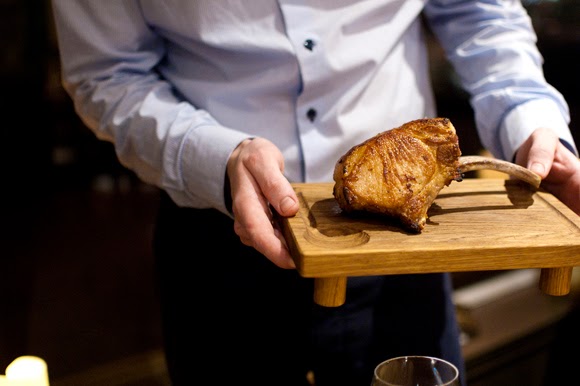 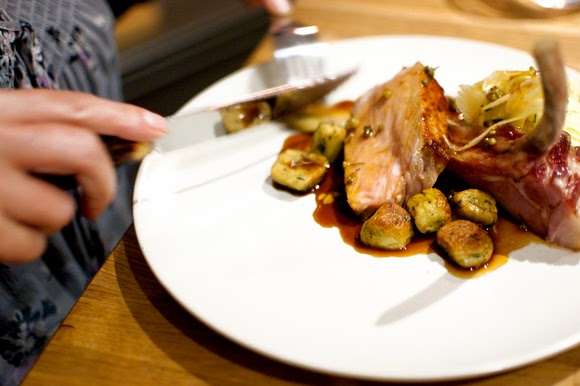 We were very much back on track with the 90 day aged beef. George brought the piece of meat out for us to inspect and explained that it's at it's best at 125 days (and will be served then in the restaurant). 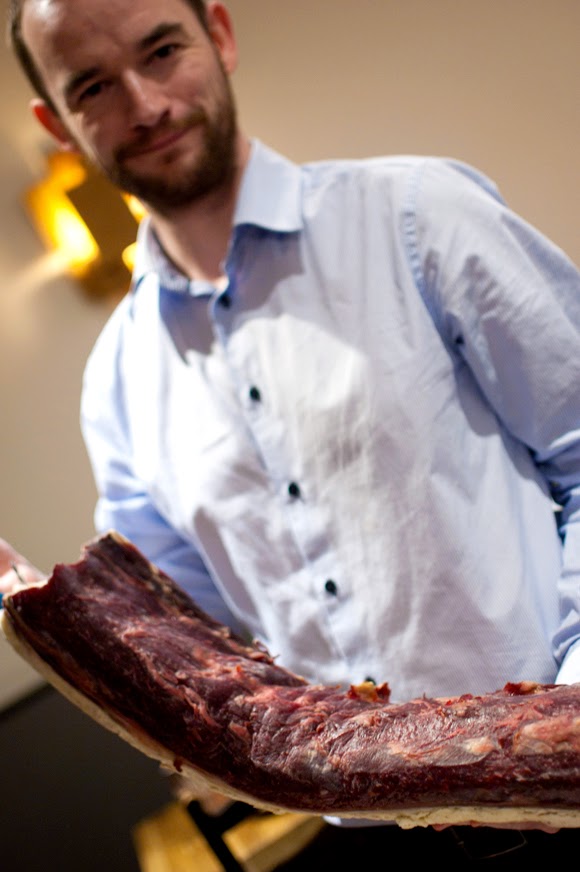 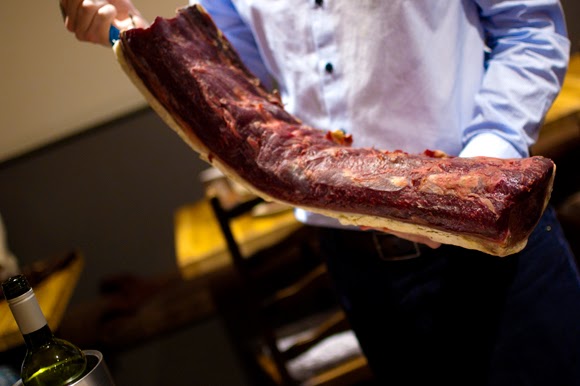 I had thought that the difference in flavour would be fairly subtle. But it was absolutely immense, up there with the best beef I've ever tasted. The flavour was so rich, with so much more intensity. It would be obvious to anyone that we are dealing with a completely superior product that clearly requires knowledge and expertise to treat. 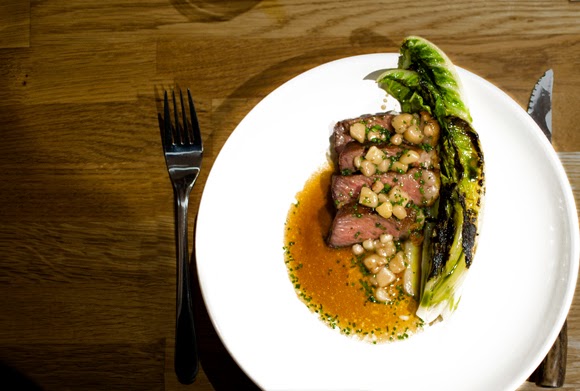 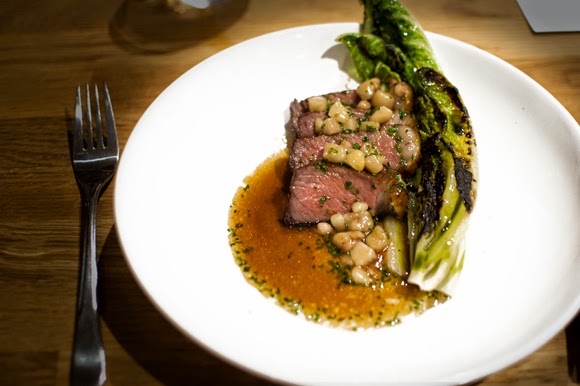 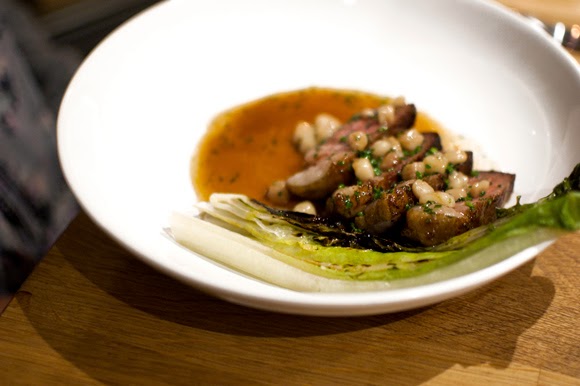 Another one of the most impressive dishes of the year made even better with little nuggets of intense bone marrow. Christ almighty! As if we couldn't love this place any more, George gave us a little taste of some vintage champagne. 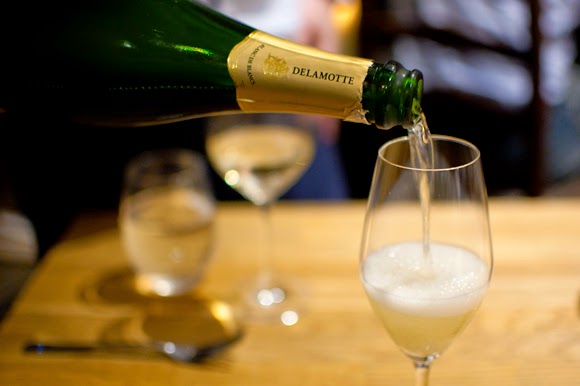 Neither of us are huge lovers of champagne, but this again was so different to your standard stuff, so much softer and less acidic, I could get used to this sort of living.
Again though, it wasn't just the wonderful product and food, it was their infectious enthusiasm and knowledge which played such a huge part to the enjoyment of the meal as a whole and sets this place apart for us.
We finished off a very memorable night with a light, pleasant Meadowsweet Mousse, semi dried plums, greengage ice. With a taster menu, I'm happier with one dessert rather than three or four that for me are superfluous. 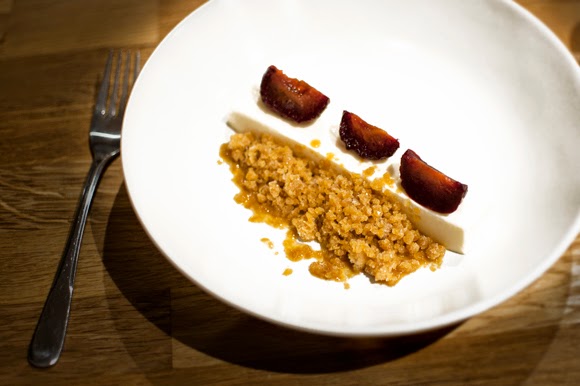 On the way to the restaurant we'd sat outside a busy local pub for a quick pre-meal drink to encourage the much needed hunger, necessary for a big meal like this. I'd said to Mrs Bacon, suppose this place now is like L'Enclume was several years ago? And we're there at the beginning of somewhere that could be as successful and as high in stature as there?
It would be no exaggeration to say that after this meal we believe that it may well happen. The passion, talent and knowledge along with the head spinning drive of James and George will take them a long way I think. Three of those dishes will stay long in my memory, the scallop, the beef and the cep. These really were up there with the finest dishes we've eaten the year. This is seriously high quality cooking. I told you I was still buzzing about it didn't I? 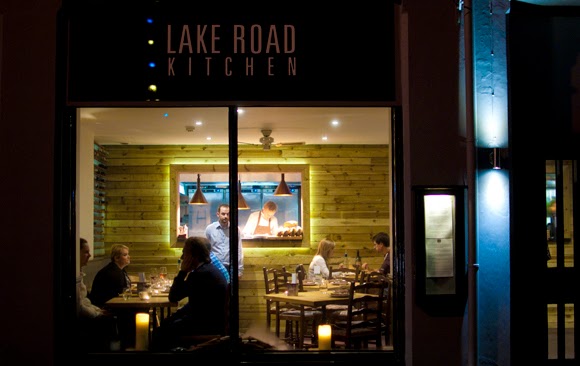 *Our bill came to £153 with a bottle of wine and was paid in full.
To see more photos click here.
An article about foraging and Lake road Kitchen here.

Follow @Bacononthebeech
Posted by Bacon on the Beech at 19:31