I was not massively impressed by Manchester House on our first visit a year ago. Actually that's not quite true, when I was invited to the press launch I was swept along with all the hype like most people there. I even made a very brief appearance on the TV programme 'Restaurant Wars'. (My parents inadvertently turned over half way through the show, missing me as a background 'extra'. Thanks a lot Mum!) But when it came to spending my own money, the best part of £100 for the taster menu, I wasn't quite as wowed as I felt I should have been at the price and in comparison to other restaurants. 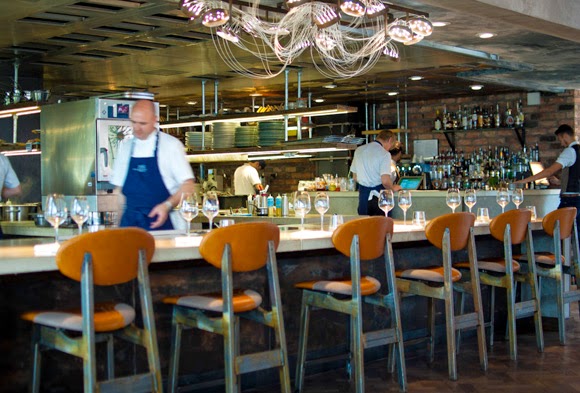 It seemed to me that chef Aiden Byrne was trying to hard to emulate the style of the Spanish Michelin star chefs I know he loves (as we do too). You can hardly blame him, I'd imagine I would have been too tempting to throw everything at it to try and really blow people away when they first come through the door. There is after all a lot of money riding on this being a success. But something was missing for me. The food wasn't quite right, it looked the part but there was no real depth of flavour. 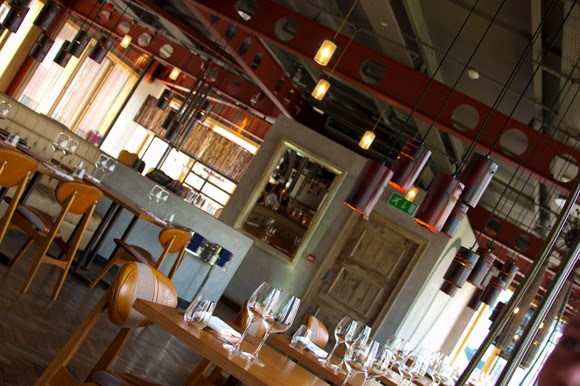 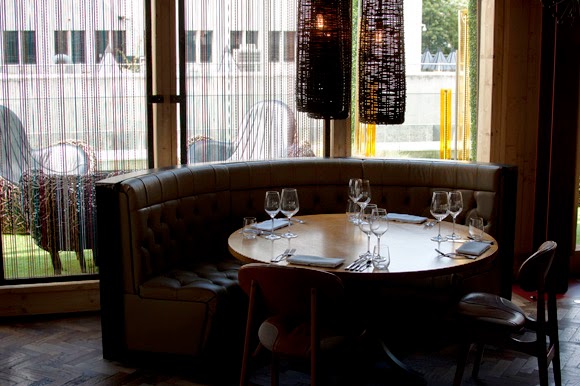 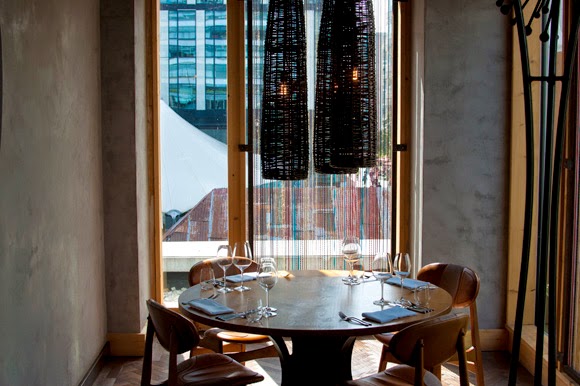 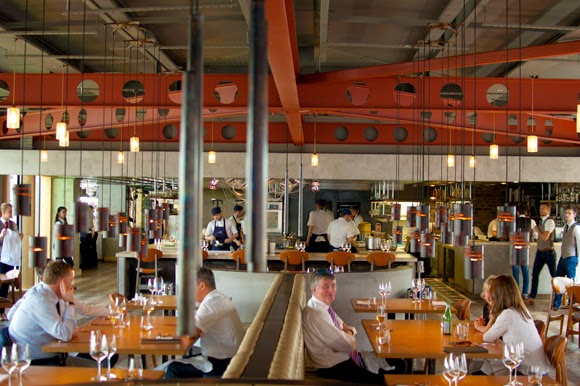 A year after opening, Manchester House is already a success story though, especially after 'Restaurant Wars' was aired. Both here and The French reported a huge increase in booking enquiries.
So when a mate of mine said he'd treat me for lunch, I was very happy to accept Manchester House as our favoured destination (especially as he was paying for the food). I've heard nothing but glowing reports recently so I was very keen to return. The lunch menu is an absolute top deal (2 courses for £22.50), so it wouldn't bankrupt him too much. As ever, more profit lies in booze and we were splitting that. We paid £40 for a bottle of Albariño which you can often get for half the price in Spanish Michelin starred restaurants. This seems to be universal in high-end British restaurants though (The French has an equally expensive wine list). 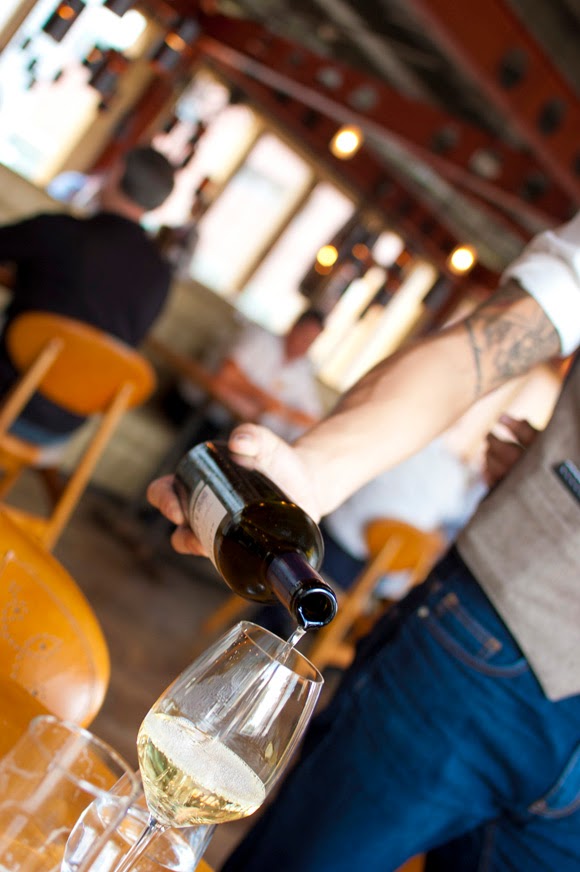 Despite the free-flowing booze, it didn't start that well for us. I didn't enjoy the complimentary bread 'course' on my first visit (watery peas) and I didn't much care for it this time. Now it's a Parmesan and onion brioche. The little (seaweed?) consommé glass you get with it tasted lukewarm, slightly vinegary and watery to me, not much flavour or point to it. 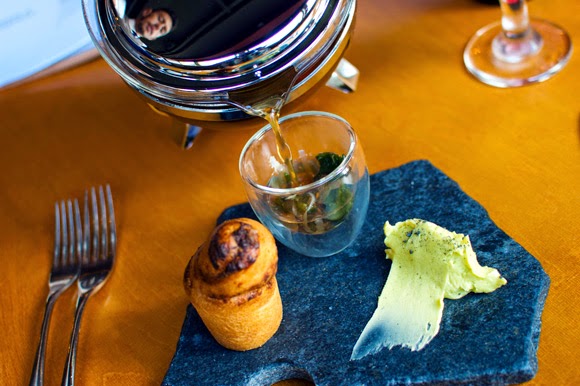 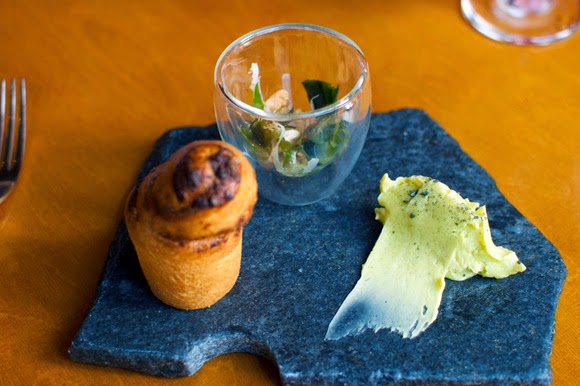 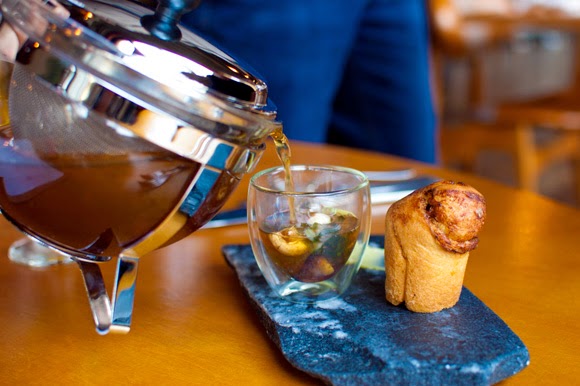 I think it would be better to just simply deliver a basket of the most beautiful French bread they can make (or source) with the finest butter (the supplier Simon Rogan uses). All good meals should start with great bread. I cannot think of a single Michelin starred restaurant we've eaten in where it wasn't a joy. It wasn't here for either of us I'm afraid.
Simple quality bread would also match the food now at Manchester House, as chef Aiden Byrne seems to have pared it back. It's a world apart from last year's and seems to be more 'honest' more minimal and less fussy. Most importantly, pretty much everything works. To start, the Brown Crab Risotto and Confit Cep mushrooms was absolutely stunning, a sheer delight. There is no finer risotto in Manchester I can claim with some confidence. But thinking about it now I don't recall the crab flavour much, but that creamy, woody mushroom, velvety stock and how the big soft juicy cep just melted on my tongue. The mouthfeel was incredible. The produce they're using really is top of the shop. We were both wowed now! 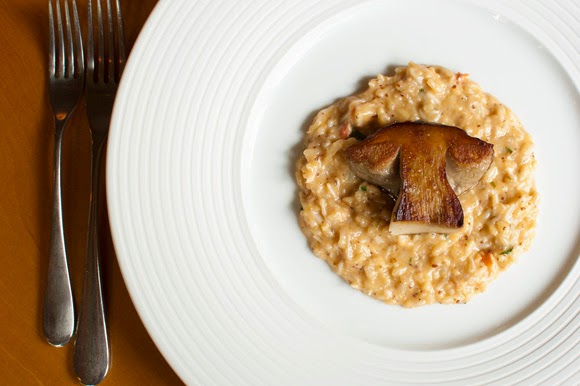 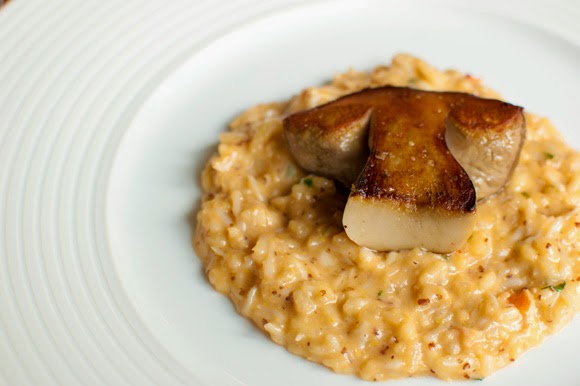 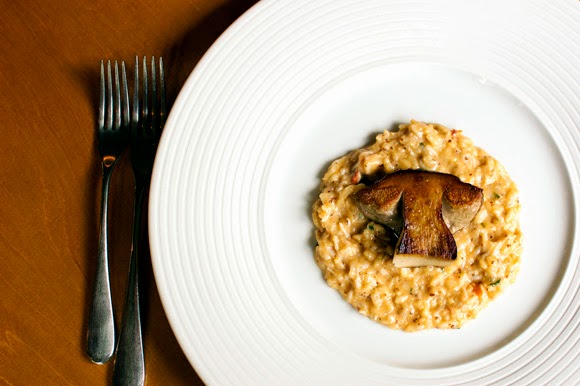 There were also some of the finest scallops I've ever eaten. These were extremely good. The roasted scallops white white chocolate and truffle risotto was an extra £18 as an additional course off the a la carte but it was worth every single penny. It's like they've just concentrated on just doing boldly simple stuff but with a flourish and with absolutely superb product. (As the Spanish often do). In this case these sublime juicy scallops which were perfect in flavour and in soft yielding texture. 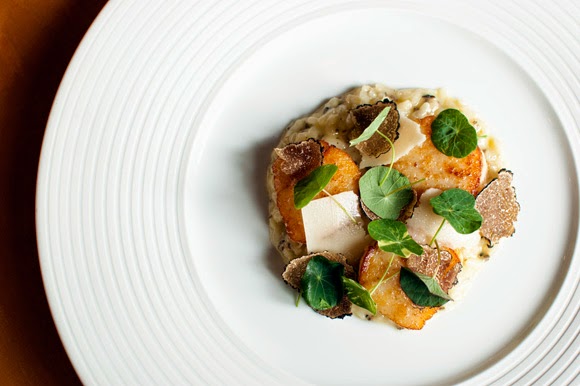 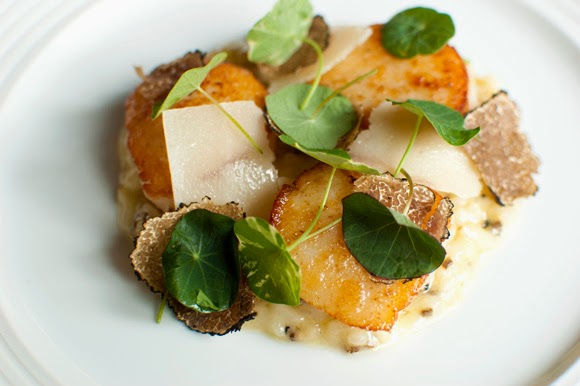 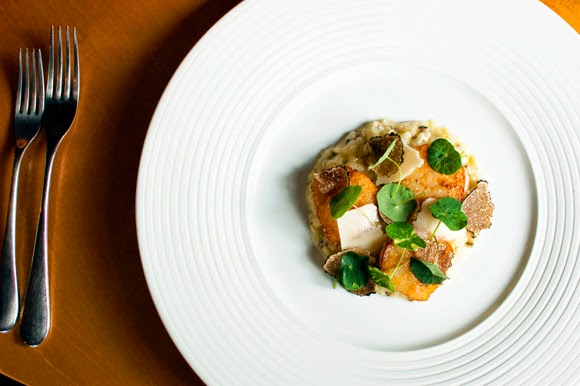 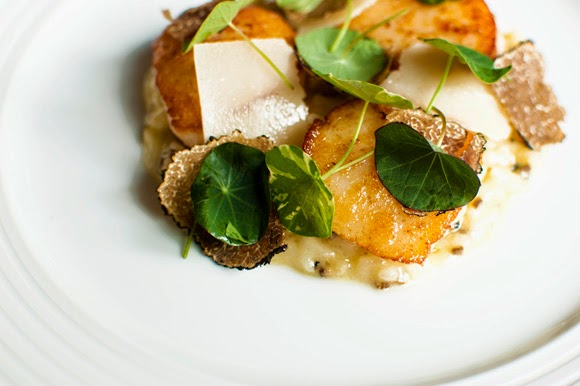 The quality continued with a Lobster Lasagna, charred lettuce and roasted apple. This was great, though I didn't quite love it quite as much as the other two dishes. 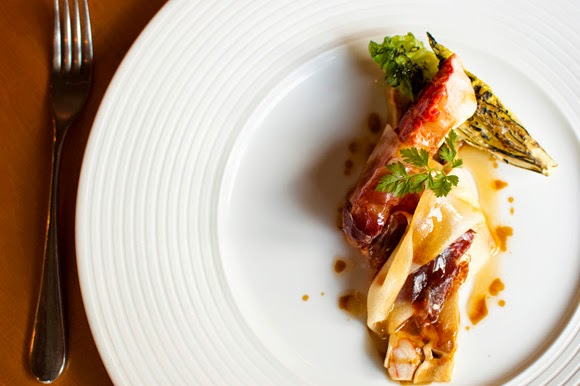 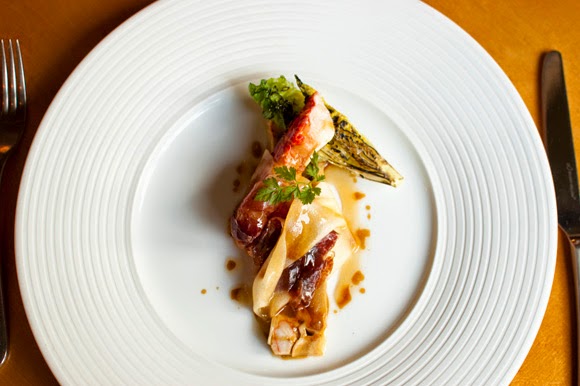 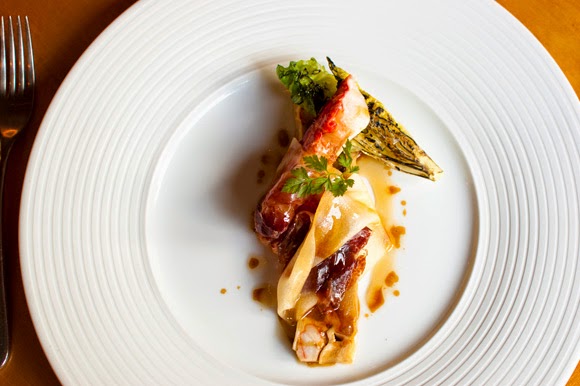 It's surprising to consider that this expensive lobster is on the budget lunch time menu. As the chef himself told us, lunch-time is more of a showcase really. They don't actually make much if any money on the food at this time. There's no finer lunch in Manchester, certainly not at this price anyway.
Dessert was pretty and decent although a little over elaborate. Lemon Cheesecake cannelloni and sorrel sorbet and blackberries. It finished it off nicely though. 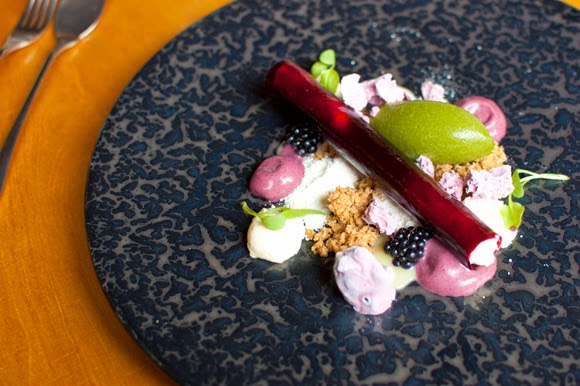 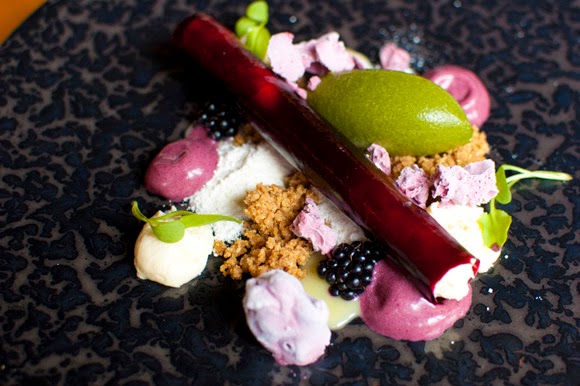 There some who claim that it doesn't matter that Manchester doesn't have a Michelin star restaurant. Of course it bloody matters! It makes a huge difference to the chef, the restaurant and the city as a whole. It'll bring a whole swathe of visitors here that simply won't come otherwise. 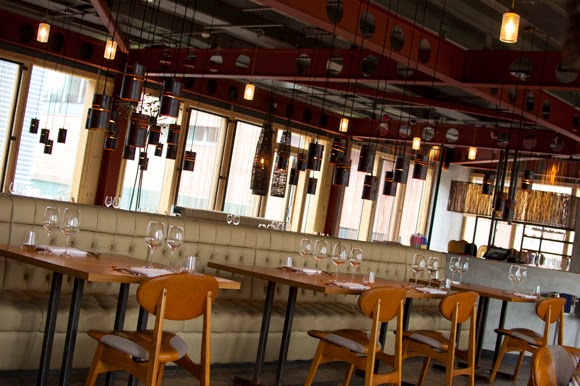 For me personally, The French is still a level above Manchester House in terms of food, innovation and top level service. They're a dead cert for a star this time, (but I said that last time, so who knows). But The French were always going to have the advantage. Some of the team came directly from two starred L'Enclume.
The service at Manchester house is not bad but it still doesn't have the same confidence yet. So if I was a gambling man (and I'm not) I'd say the French will get a star but Manchester House I'm not so sure about, this year anyway. I do hope they both get one, it goes without saying. But who knows the mysteries of Michelin?
What I can say for sure is that this lunch was extremely good, especially for the price. Star or no star, we left as very happy (and merry) customers that afternoon, so surely that counts for something?