I've not got much time for those who say they don't like twitter. I've met some fantastic people I'd never have met otherwise and countless others (worldwide) I've made a little connections with, all due to our love of good food.
Two lovely folks from twitter came to El Capo with us the other day. You might follow Ian Deveney @DeKroonCat and Amanda Goodwin @MandaGooders yourself, especially if you're a follower of @FamousEats. I doubt if many have eaten more Almost Famous burgers than Ian. Coincidentally, two other people I sort of 'know' from twitter were in El Capo when we were. I never thought I'd ever say the line; " 'Scuse me but are you Beetroot rabbit?" in my life but @Beetrootrabbit and @emmmmerla happened to get the seat next to us. It was great to finally put faces to names. So I'm not going to write this review. They are. (For the main part anyway). 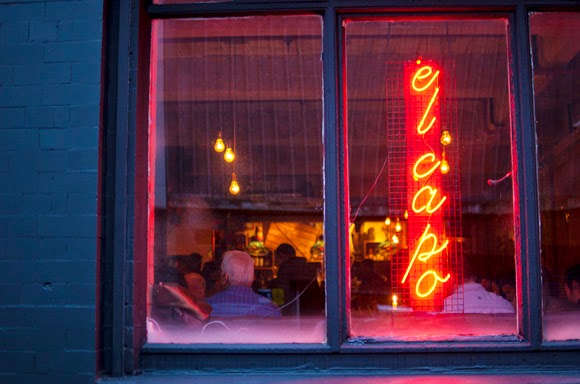 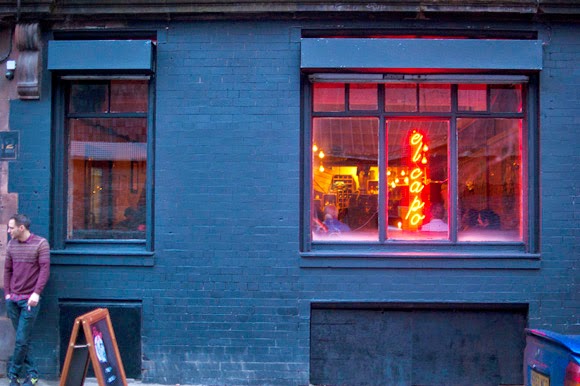 I thought it'd be interesting to see what they thought of this new Mexican. It turns out that it was a mixed bag to say the least. We were really excited to be returning, things looked promising from last week. But I'll hand over to them.
Ian Deveney @DeKroonCat.
"I thought the service was excellent. Even though we were all gassing away and not looking at the menu, the lady came back a few times and was really nice. Right, the food... Not the best Mexican if I'm being honest. The chicharrons were tasty and not greasy at all, the meatballs were spot on. Amanda loved the Mi Corazon (heart), me not so much. The wings were pretty bland I thought... Needed much more flavour I couldn't taste any cumin on them and it said they came with "sh*t loads of garlic"... Did they f*ck! And as for the tacos... Pork ones were okay but it was peppers on them and not pickled chilles the "charred" chicken ones were RANK!!! Amanda thought the Manila Galleon was sublime. Overall I'd give them a 6.5 out 10
Would I go back? Yes but not straight away... I'd give them a few weeks."
Amanda Goodwin @MandaGooders.
"Our over all experience while at El Capo was good with a good atmosphere and great cocktails but things need to be tweaked slightly on the food front.
We had the char grilled chicken (3) and Beef tacos (3), Chicken wings, Cow’s heart, Meatballs and Chicharron crispy skins. The chicken Tacos were bland and not charred, the pieces were just too big to eat for a taco, they reminder me of supermarket chicken in a pack. We were advised they had changed the chicken from thigh to breast due to the complaints of thigh being too fatty, I would have to disagree fat means flavour !!!  The beef was slightly better but with no hint of chilli as per the menu. Their meatballs worked well with a little kick of chilli to accompany the tomato sauce.
I loved the cow’s heart and found that this was a lot like small strips of steak with a beautiful flavour.
Chicharron’s were really crunchy and salty with great flavour and I would have them as a tasty bar snack any day.  I have to say the desert that we had was amazing, chocolate pudding which we demolished and said we needed a bigger bowl along with the three ice creams in the skull cups."
Photo below, the chorizo which was pretty good. 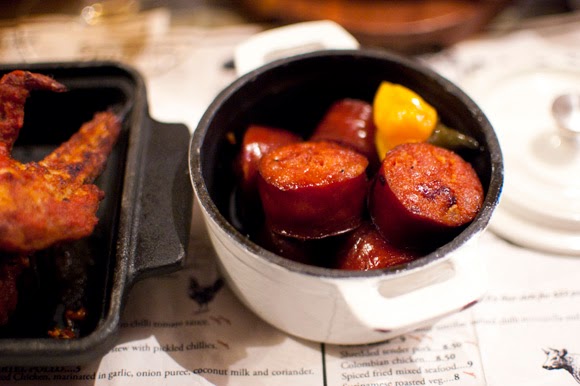 Nichola @Beetrootrabbit.
"I thought the service was good. Staff attentive but not too in your face. Listened to our feedback on the food. They knocked off the food we weren't happy with from the bill.
The appetisers. We had the skin. We couldn't decide which to have (pork or chicken) so waitress offered us a selection. I can't remember the chicken but the pork skin tasted stale. Also had the chicken wings with garlic. First lot sent back because they were cold. Nothing special about them. Pretty bland. Wouldn't order again
I had the pork burrito for main. It was pretty good. Lovely smoky taste. Cassava chips were bland & mushy. Was looking forward to trying the churros but not doing them, which seemed odd. All in all, for the burrito & taco experience Lust Luck Liquor and Burn is far superior food wise, but El Capo's service is much better. I'd give it another go. " 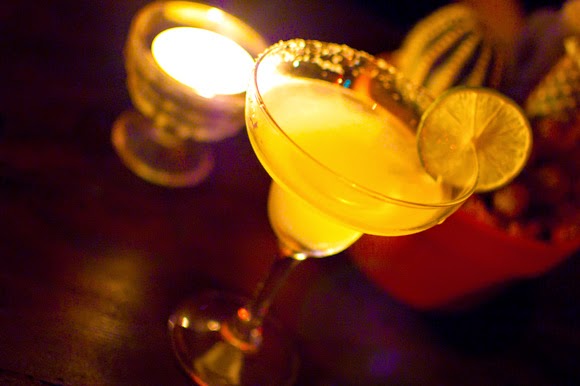 emmā @emmmmerla.
"Food was crap, service was lovely. The blandest Mexican food I've ever tasted. It is a shame because I had high hopes, you saw my food so I can't lie. I wish I would have ordered the other stuff then. The guac I had off Nichola's plate/board was very nice *scrapes the barrel for positives. I think Frank (the dog) would have turned his nose up at those tacos."
Oh dear, Mexican food should never ever be bland, I had a taste of the chicken and it was some way off where it should have been. These opinions might seem a little blunt but these guys all eat out quite a lot and are pretty discerning about exactly what they want! There have been more positive reports from bloggers @MrsPetticoat, @FoodChoiceMCR and also @getapad.
But after a very promising start last week, things didn't quite live up to expectations if I'm honest. I have to say that again we seemed to choose the strongest dishes, the ceviche from this time, (which was a good fresh dish, photos below) the morongo stew and cow's heart from last time. In fact most of what we ate last time was actually good. But other dishes were not, strange. 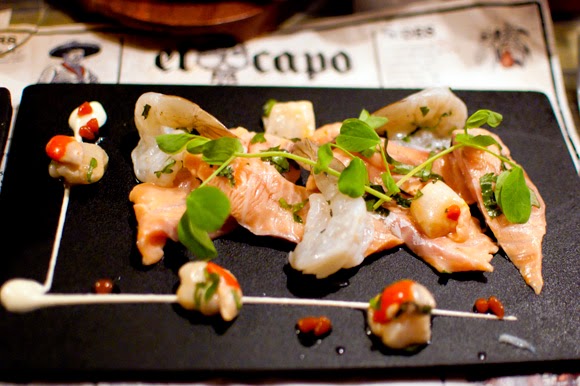 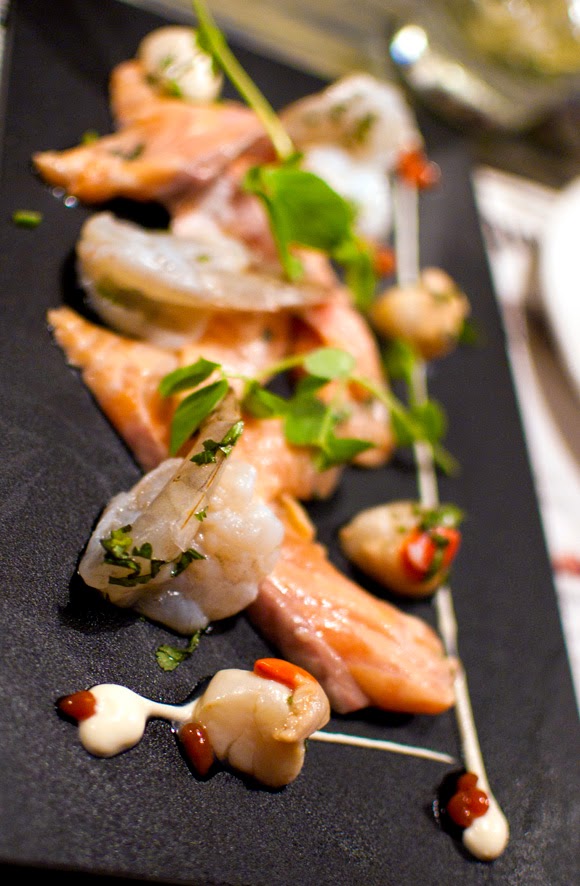 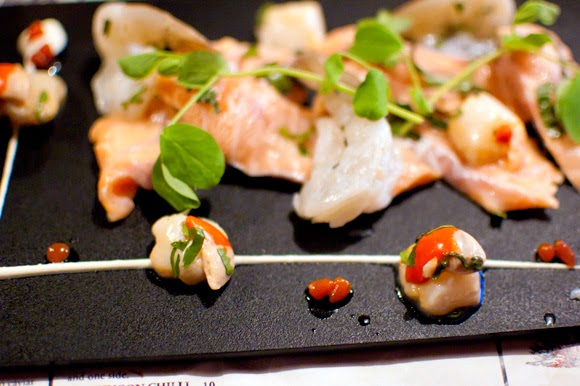 It just shows you, you can order the weaker dishes and have a completely differing opinion of the restaurant as a whole because of these inconsistencies.
It also illustrates how a restaurant needs to hit the ground running in these days of social media, people will be quite rightfully vocal about if they like somewhere or not and with immediate effect, to their followers. 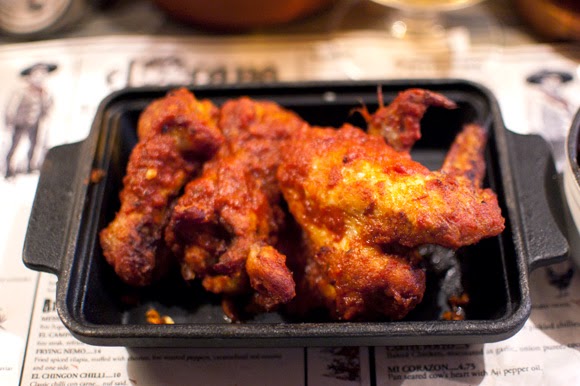 Coincidentally, I think one of the things that could make this place the great restaurant it should be is the input of another ace person we've met in real life; Grace Josephine. @HelloGracieJo works very closely within the team at El Capo. As an American, she's very familiar with proper Mexican food so I know she will push for big improvements. (She was already on the case after our feedback on the night).
I'm hopeful and confident (as an optimist) that El Capo could be a really good and different addition to Manchester. Personally I think they've only just been open a week so it'd be a bit harsh and premature to write them off just yet. Or maybe I'm too optimistic, that it'll never be as good as I'd wanted it would be? I really hope not. If you do go, let me know what you think, via twitter of course.

Read about the best Mexican food we ever had here.
Preview of El Capo here.

*50% off deal, some dishes removed from the bill plus desserts on the house after complaining.

Follow @Bacononthebeech
Posted by Bacon on the Beech at 18:33