Leitão assado da bairrada, suckling roasted pig is a traditional delicacy in Portugal. The pig would be fattened up all year and slaughtered on a feast day, the whole family helping out including the kids. Nothing would be wasted. I'm told this family tradition has been deemed illegal now by health and safety inspectors. Of course the classic dish is still found all over Portugal in restaurants (Spain as well) and luckily for us, once a month at Lusitano, the Portuguese place here in Chorlton. 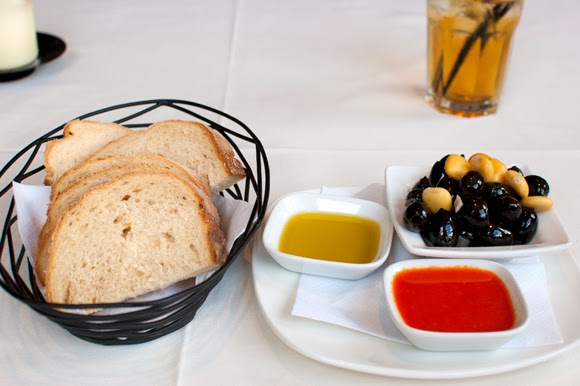 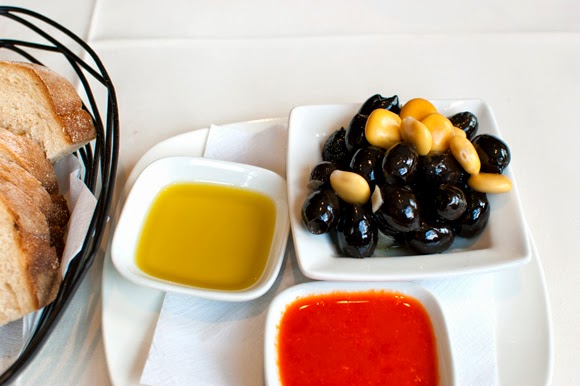 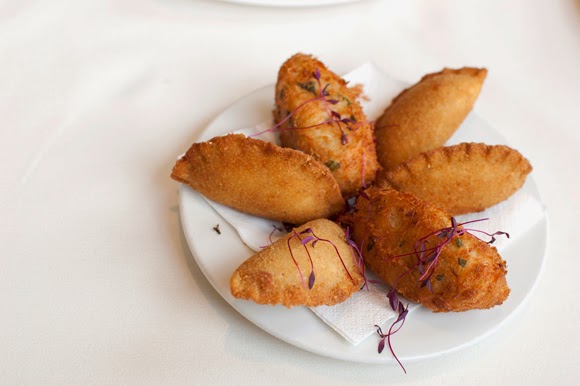 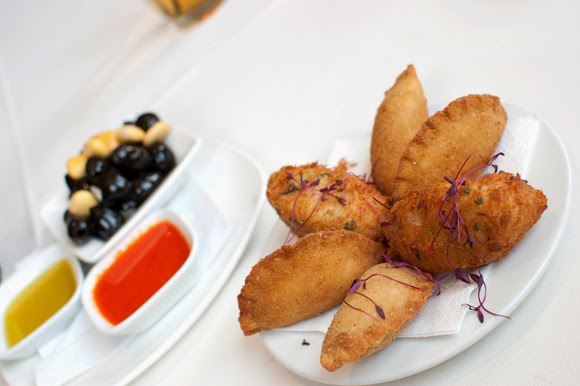 We started off with some dips, good olive oil and excellent bread from nearby bakery Barbakan. Then some traditional Portuguese fish cakes, (these are a little dry). This was all part of the set menu. Then came what we were really here for. I specifically asked that they bring out the pig head to photograph (they don't normally do that). 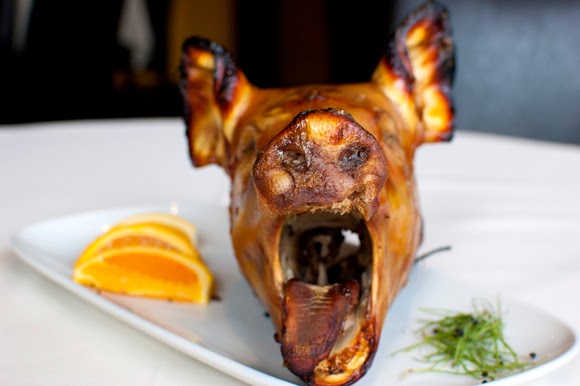 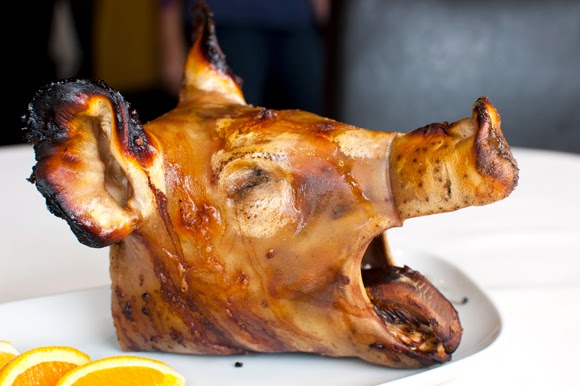 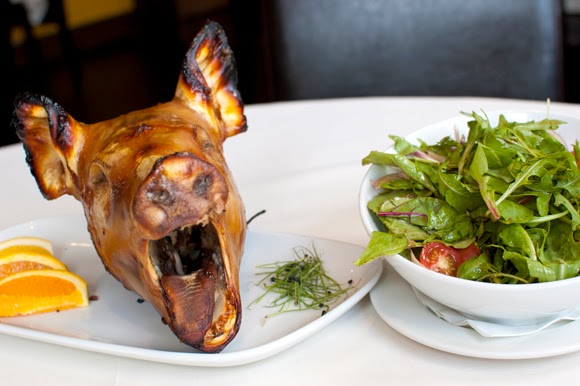 People can be squeamish in Britain, the link between meat and where it actually comes from is even more disparate. (People are used to buying their meat under plastic from supermarkets).
In a quick straw poll at Mrs Bacon's workplace, half of her team can't even eat fish with their heads on! We do have a long way to go in Britain.
After their first event, the restaurant even had abuse from extremist vegetarians via Facebook. Don't get me started on that one. 95% of us still eat meat whether they like it or not.  It is better though to eat meat less regularly but to eat quality product like this over cheap supermarket trash. 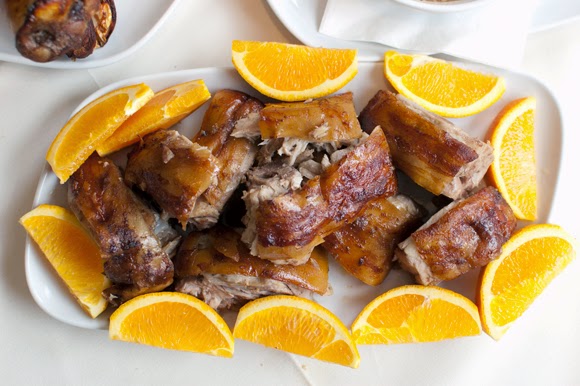 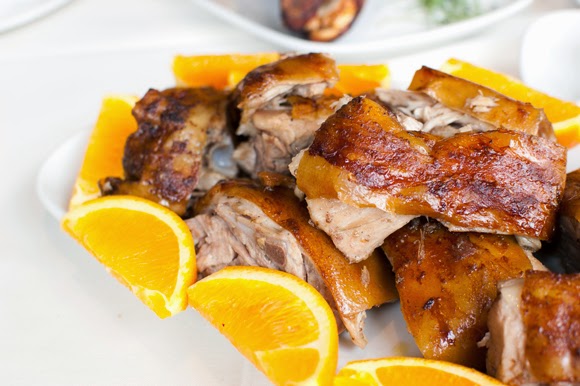 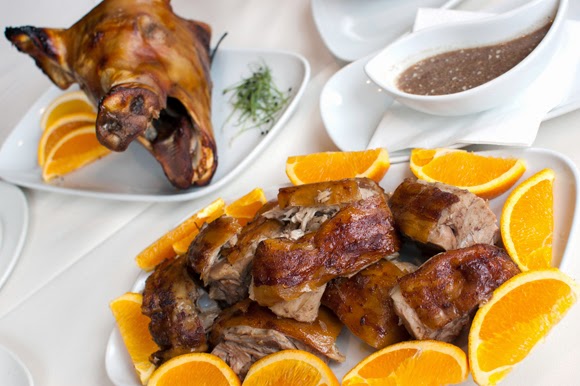 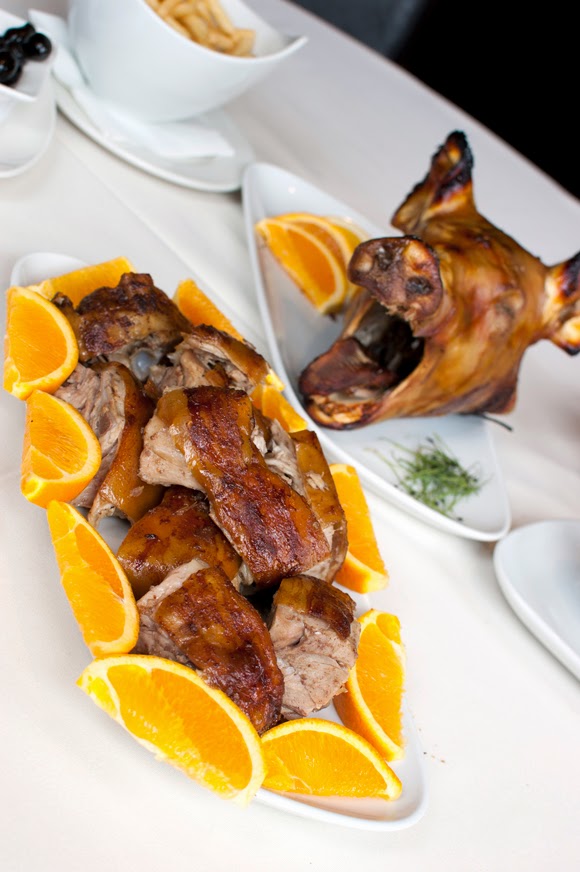 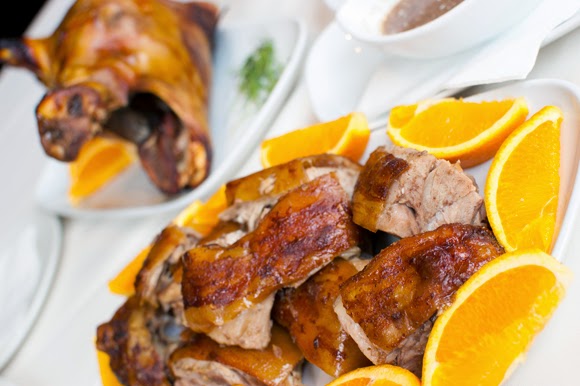 I think they're missing a trick with the theatre of it all. At José Maria restaurant in Segovia (also famous for it's suckling pig), they bring the beast out with the head on and it is cut up using plates in front of you.
Nevertheless, it still looked fantastic when it arrived, with the oranges placed around the outside. These are not just for decoration, the citrus cuts through the fat and saltiness perfectly.
They are quite salty (and I didn't need the traditional gravy which adds extra salt). But oh my god, the meat was so succulent and juicy, the crispy, crunchy, thin skin against the soft, milky, moist, flavoursome meat. (Not overly dense as pork can often be here but with just the right amount of fat). It was absolutely bloody spot on! I can guarantee that nobody in Manchester was eating pork as good as this last Sunday. (They import these suckling pigs especially from Portugal as they're not easily available in the UK).
If you consider yourself a serious foodie or just enjoy eating well, Leitão assado da bairrada needs to be on your 'to eat list' and Lusitano do the job very admirably.

We finished off with a lovely traditional egg custard and an average choccy mousse (needed more dark chocolate in the mix for me). 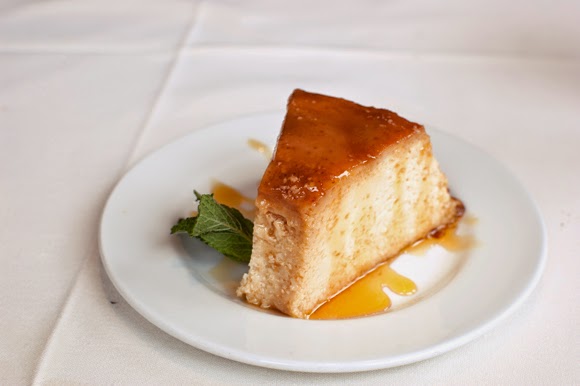 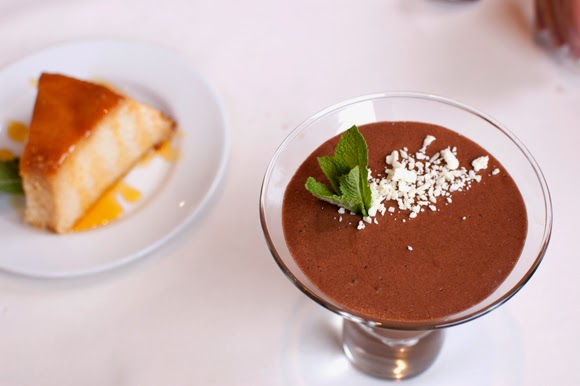 The next suckling pig event will take place on Sunday 7th September.
Our fully paid bill came to £45 for two with drinks. Slightly more than I'd anticipated but worth it.
To see my earlier review of Lusitano click here.

Follow @Bacononthebeech
Posted by Bacon on the Beech at 08:44