One of the things I like to do in Spain is a tapas trail, work out a map of all the places I want to visit and try and go to as many as we can in one night. 'La Marcha' (bar hopping) is very common in Spain especially when there are so many bars in close proximity (Seville is very good for this, obviously San Sebastian is the best in the world). You might have the snails in one bar, then go next-door as their mushrooms are the best.
A tapas trail in Manchester would be quite impossible as there are no decent tapas bars in the city centre right now until Ibérica come to Spiningfields in the Autumn. Not so in Liverpool. So as we were going for the day, we worked out a map. What follows is less of a restaurant review (as we only sampled a few dishes at each place), more of a general impression of the food that we had (although I asked at each one which were their best tapas). 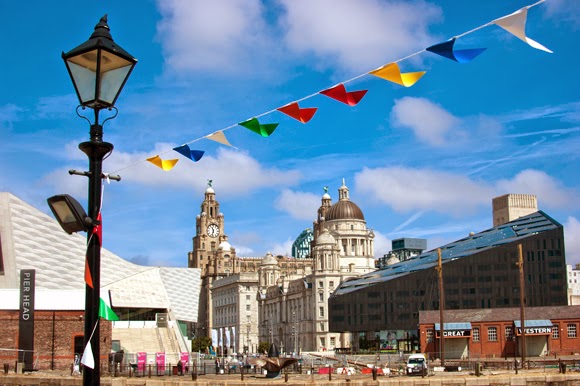 First up, Lunya. I've wanted to go to this deli come tapas bar for ages as I follow them on twitter. We arrived early and got a quick coffee here before doing a quick tourist wander around the docks. Liverpool really was looking at it's finest in the sun on Thursday. Such impressive buildings too. It's unbelievable that it's only about 45 minutes drive from Manchester and yet we've rarely visited in recent years up until now. 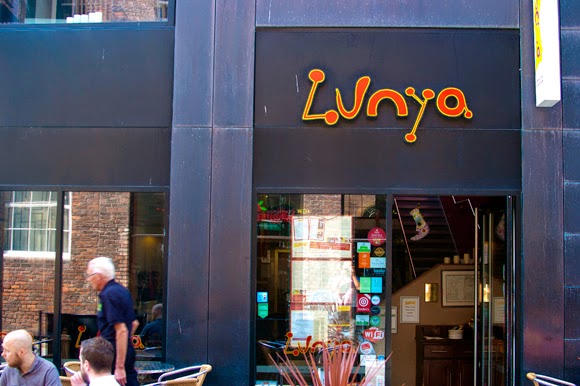 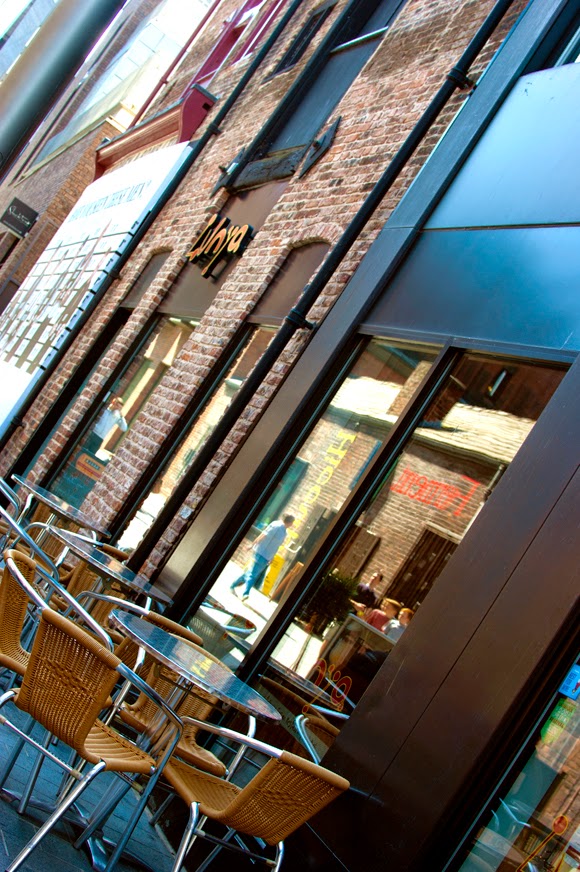 We returned to Lunya and asked for their three best dishes for their lunch time deal. (3 Tapas & home made sourdough bread for £10.75). Gambas pil pil, king prawns in chilli, garlic and vanilla (£2 supplement) are normally a big disappointment in Britain, not so here, big, plump, juicy prawns and loads of garlic-oil to dip your bread into. That'll do nicely. What a fantastic start! 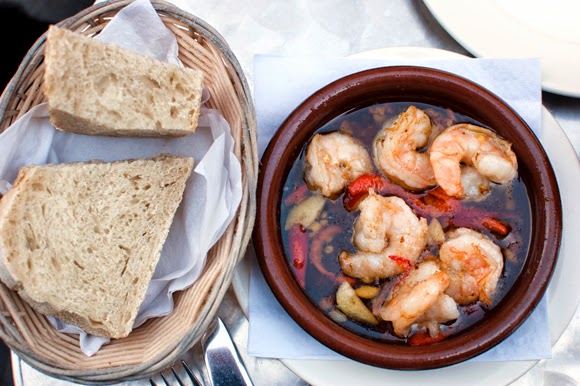 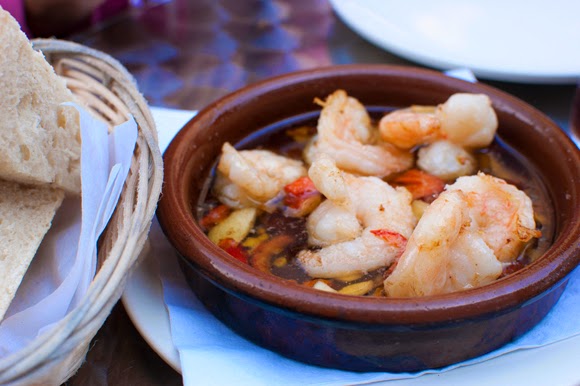 Catalan Scouse is one of their signature dishes I think, their take on the local stew, an enjoyable hearty affair with big chunks of chorizo in it. Adding chorizo to anything for me always improves it and this is a match made in heaven as there are quite a few good stews in Spain with chorizo. (Cocido and Fabada Asturiana are already firm favourites of mine). 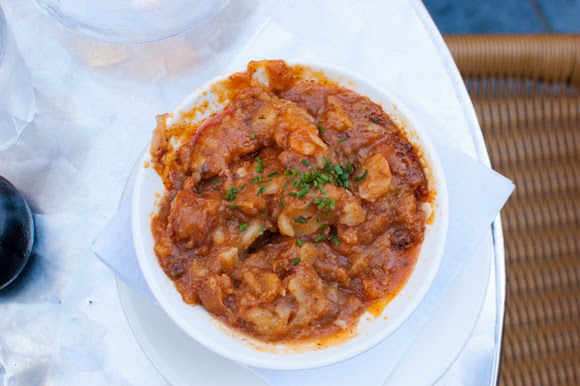 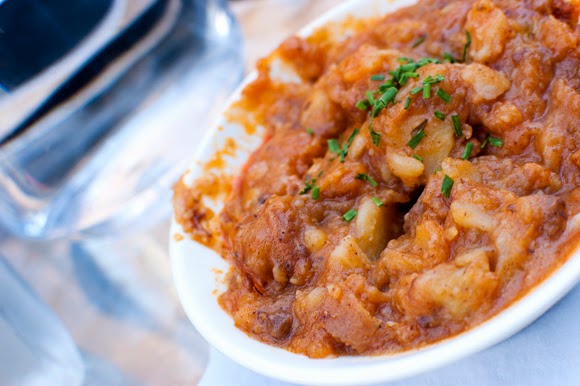 Pluma Ibérica with shallot purée & red Onion chutney was excellent, really great quality tender, juicy meat. We tried in vain to go light on the bread 'to save room' for later. I think we chose well here (we had good advice too). Our final bill came to £18 with drinks and an extra supplement. 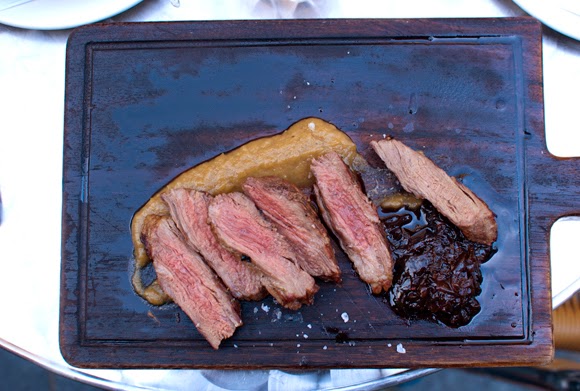 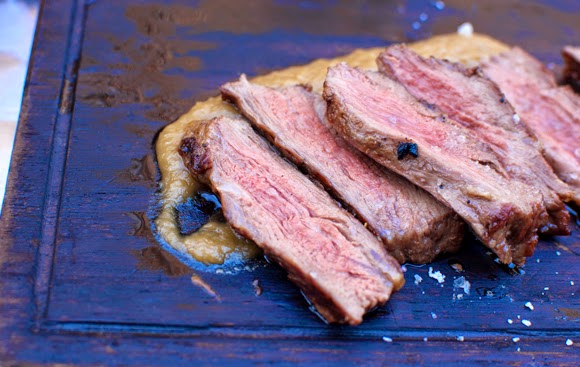 Next up and just around the corner, in a great position is Salt House Tapas. It was only 12.20 and it was already 3/4 full. Yes, there was a strike on Thursday, but this certainly indicates how popular this place is with locals. 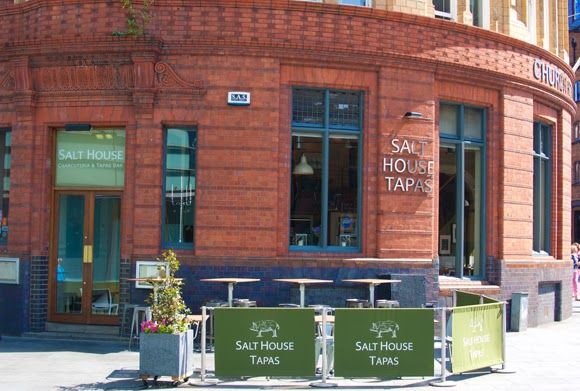 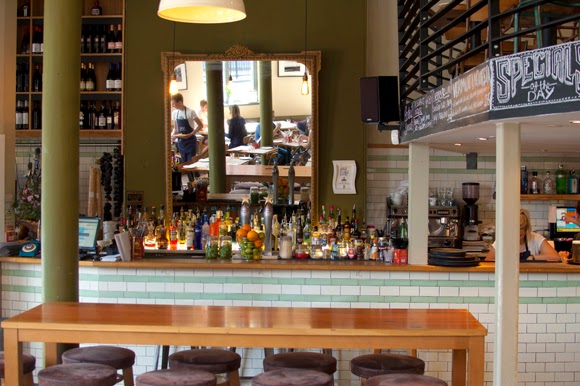 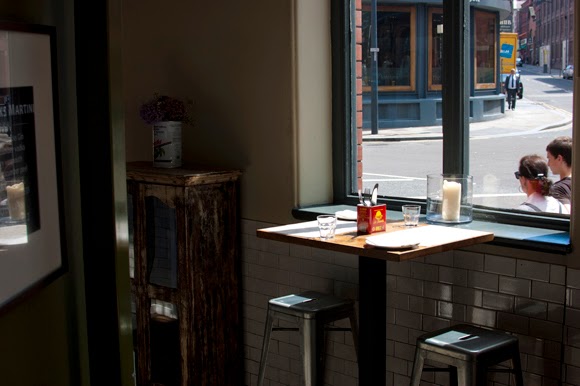 Initially it feels a little more like a chain (I hear very good things about their sister restaurant; Baraco, similar to Polpo in London, small Italian plates). Our waitress was very helpful in choosing three very strong dishes as part of their 3 tapas for £10.90 on the lunch menu. Slow roasted Belly Pork was pretty decent, not the best pork belly we've had, but a good one, (not too dry either, just the right amount of fat), especially for the price. 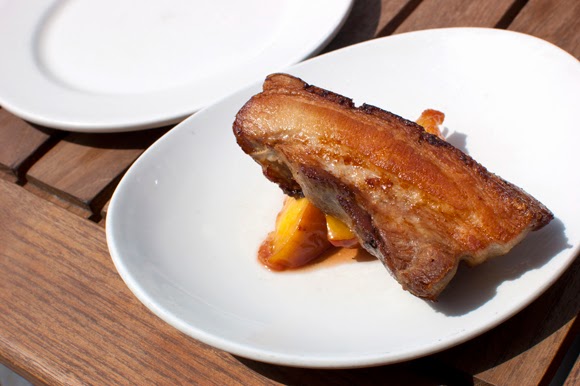 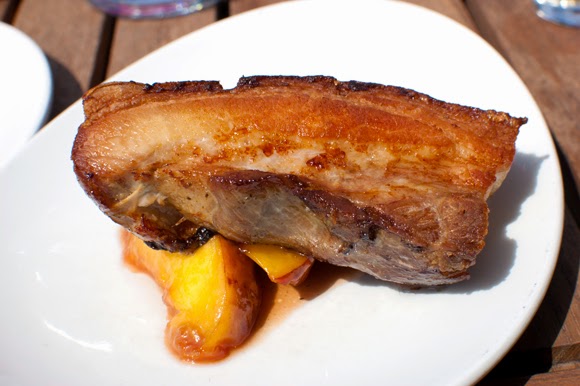 Pan fried Seabass with courgette, fennel, mint and feta salad was one of our favourites of the day. 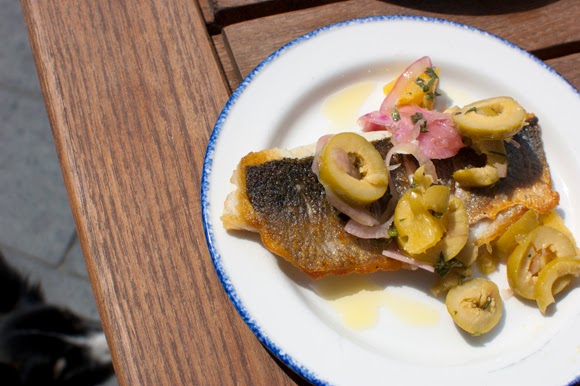 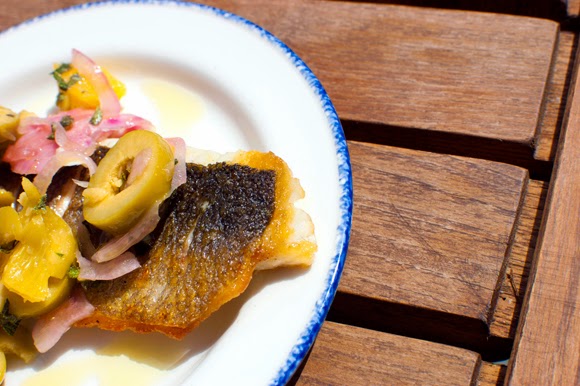 We also enjoyed the Mackerel, I generally love this fish anyway; the flavour and texture and the crispy skin. 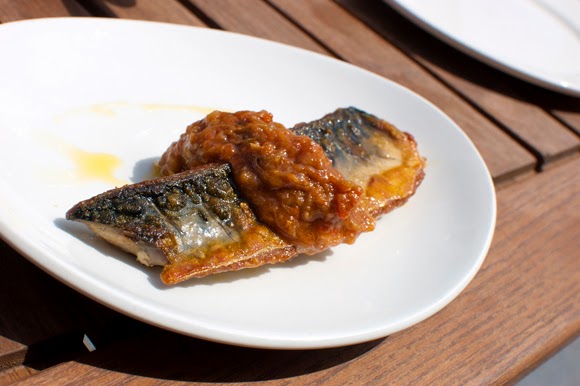 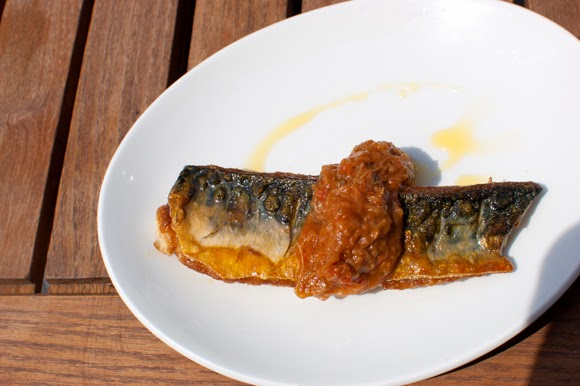 The portions were slightly smaller here, but I'm not complaining about the value for money, some nice little touches too with the accompaniments. Our bill here came to £15. We had a great spot in the sun on the corner and Mrs B wanted to veer off course with churros but that would have been game over. We had more tapas to be eating, so had to go on our way.

Neon Jamón, about 15 minutes drive up the road was the one I was looking forward to the most in a way as there seems to be a bit of hype around it. 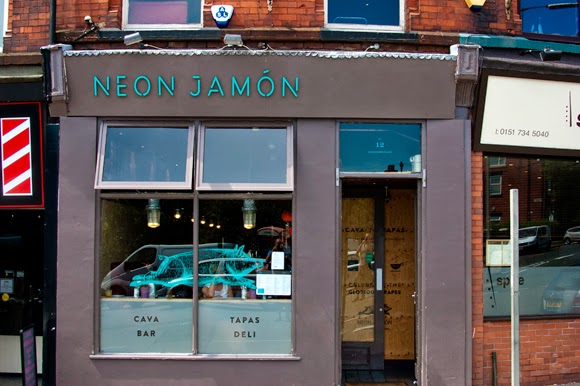 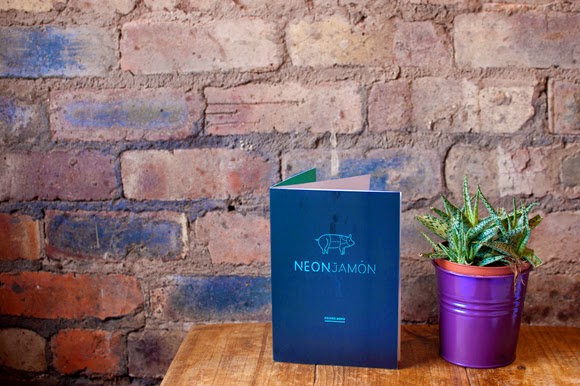 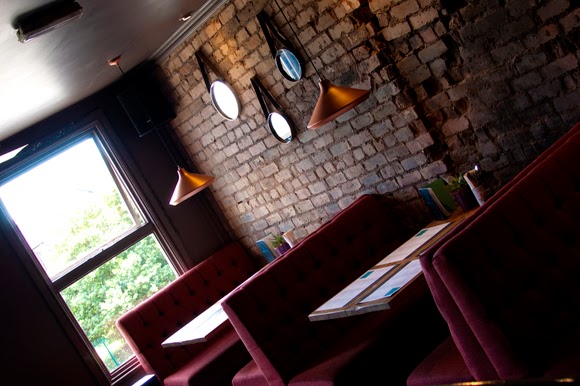 Sadly it was the most disappointing of the three, being slightly less 'foodie'. It started off well, it has a buzzing neighbourhood vibe and cool interior. But it went downhill when they started playing Sting. However, the portions were the biggest here and the two tapas for £7 is still a lunchtime bargain. (I think we didn't choose that wisely either). We had Fried straw fries topped with two runny free range eggs and paprika with fried artisan chorizo. 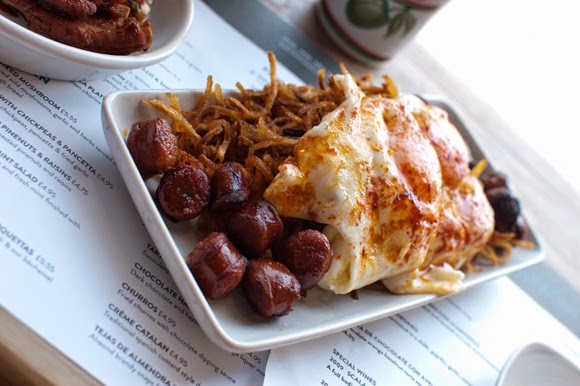 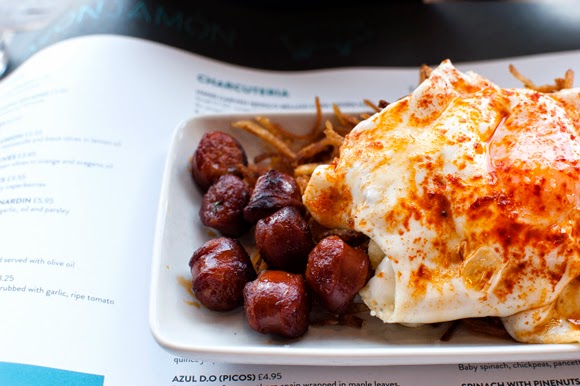 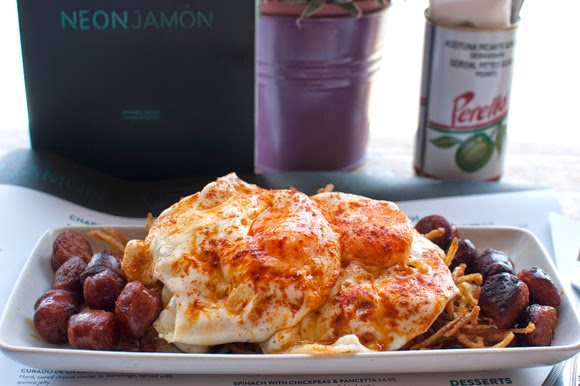 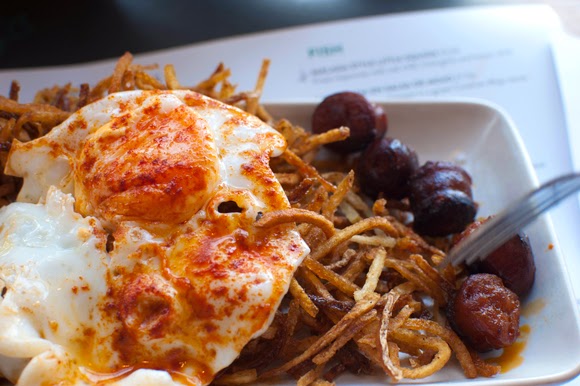 I enjoyed this in a student-y type of way. It was simple hearty food, but really nothing special. Mrs B didn't much care for the fries which were more like thin crisps. The Slow cooked Iberico pork ribs, (Membrillo and sherry vinegar with rosemary, quince and honey) were enjoyable enough, but as we'd travelled from Manchester where you can't move for ribs right now, I regretted that we hadn't ordered something else. Our bill here came to £11.50 with drinks. 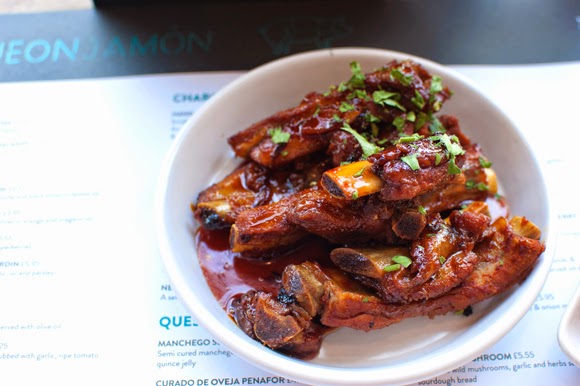 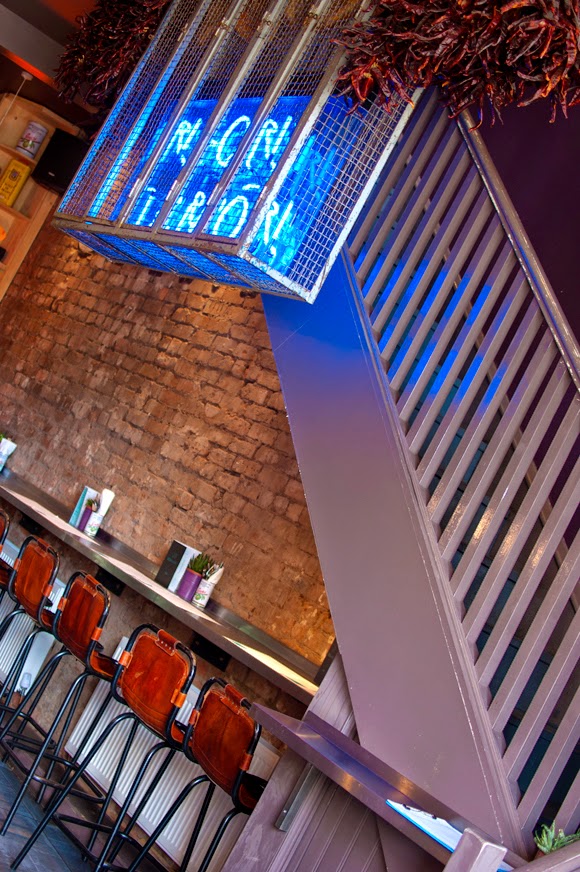 I had thought that there would be a clear winner and was going to crown the best tapas of the day but neither of us could quite decide, certainly Lunya and Salt House were the strongest of the three for us, but they were all quite different. 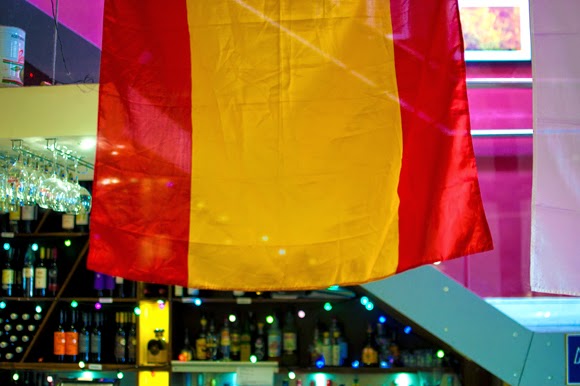 If you twist my arm though, my two were the prawns from Lunya (a classic dish well executed) and the Seabass from Salt House. Mrs B's choices were the Scouse and Iberico pork from Lunya and the Seabass and pork belly from Salt House, so it's a dead heat between Lunya and Salt House. Liverpool is lucky to have two good tapas bars in the city centre and we were lucky that we were able to take advantage of our day off and the sunny weather. We'll be back sooner next time.

Follow @Bacononthebeech
Posted by Bacon on the Beech at 08:19