It seems that the majority of restaurant openings in Manchester these days are completely uninspiring; chains, steakhouses, sausages, even more burgers etc. I get sent invites quite often by PR companies, and I usually just ignore them. Plus I'm large enough as it is, if I went to them all I'd be Britain's fattest man. I rarely order a salad out. However, I was excited to try Chalk Bar and Grill as soon as they opened last Thursday. This is because I'd visited The Wizard at the beginning of last year and the food was excellent. Most of the team (and chefs) come from this gastro pub in nearby Alderley edge, which has been in the Michelin Guide for over ten years. 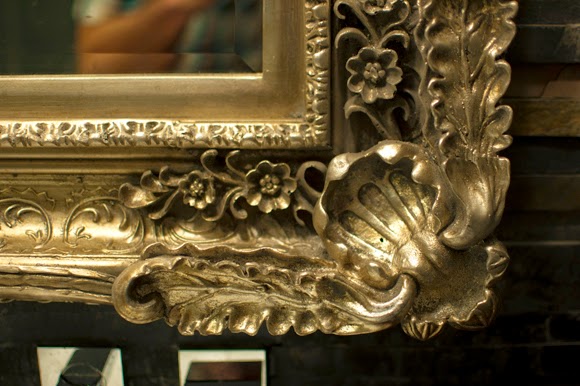 I got them to send me the menu just before opening. To be honest, I was a little disappointed. I expected it to be more 'foodie' with a few more unusual dishes on there. But they clearly know the market they're going for and there were a few things that I knew I was definitely going to order.
We reserved a seat on the terrace at the far end of Didsbury village and watched the world go by. The first thing you notice is how many posh cars there are in Didsbury. It's so much more affluent than Chorlton where we live and I reckon this restaurant will easily cash in on that market as the ever popular Living Ventures do so successfully with nearby Gusto. 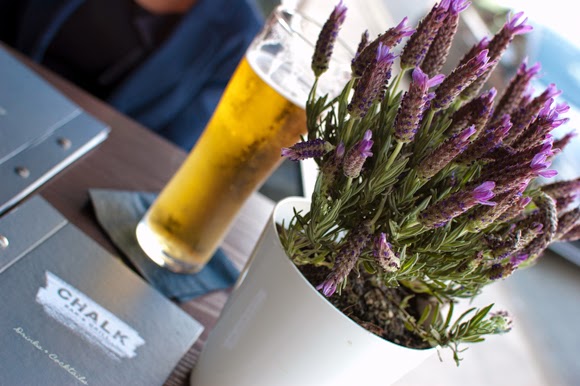 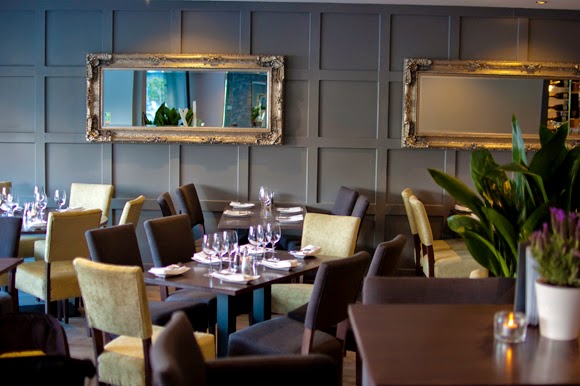 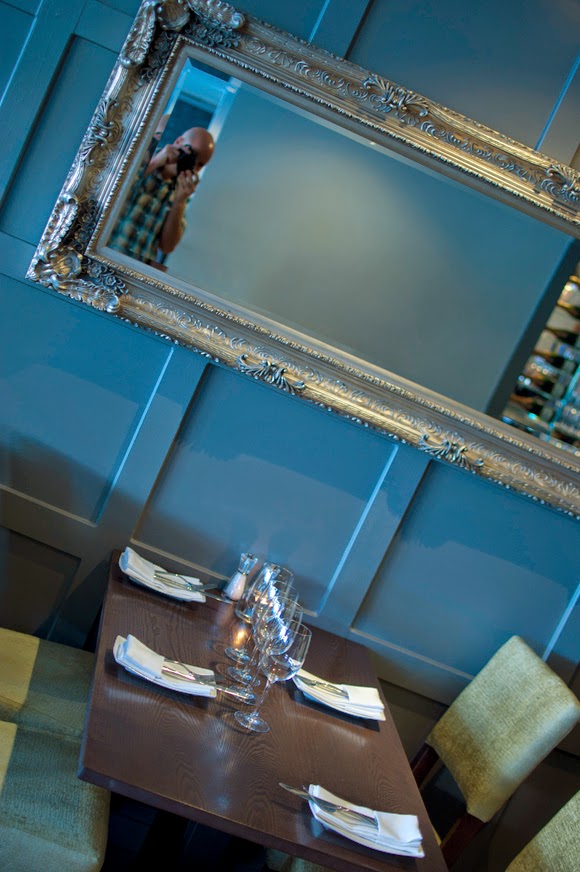 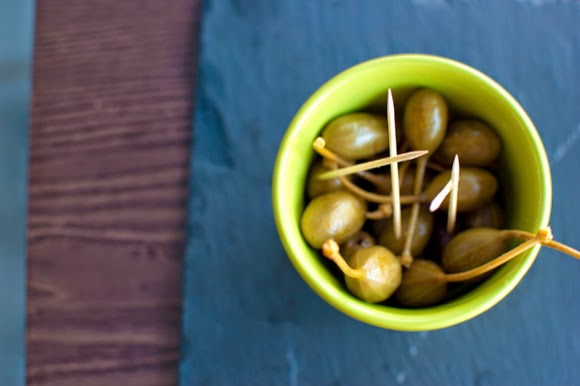 Then Soft Shell Crab Tempura (£6.95). This was a thing of beauty, as I photographed it, a passer by commented that it was like a work of art. You are on the street pretty much, so people do like a good nosy as they walk past. The footfall will obviously very much work in their favour. 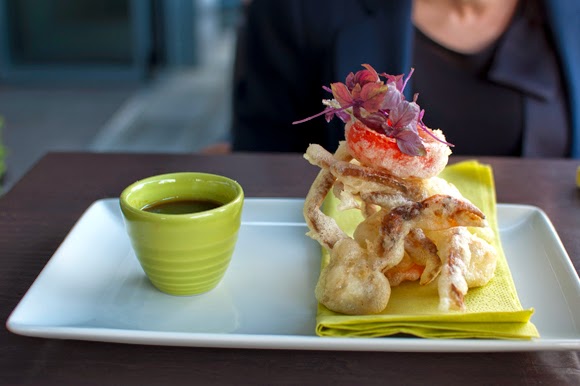 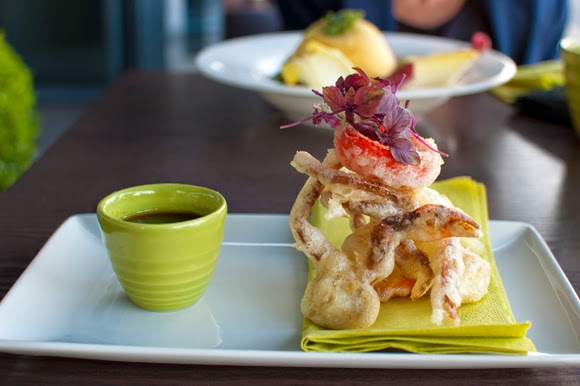 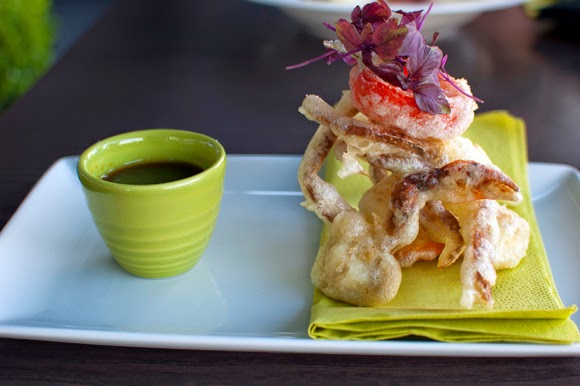 We also shared one of the mains as a starter; Twice Baked Cheshire Cheese Soufflé, Chicory & Pine Nut Salad (£11.95). We really enjoyed both of these dishes immensely. The tempura was light and crisp and the soufflé was bob on too, lovely and fluffy with a warm and comforting inside as you opened it up. Top marks. 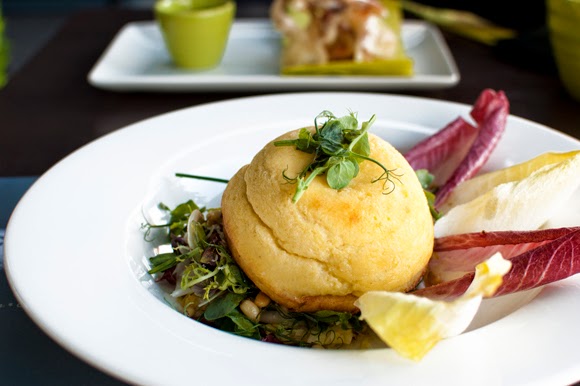 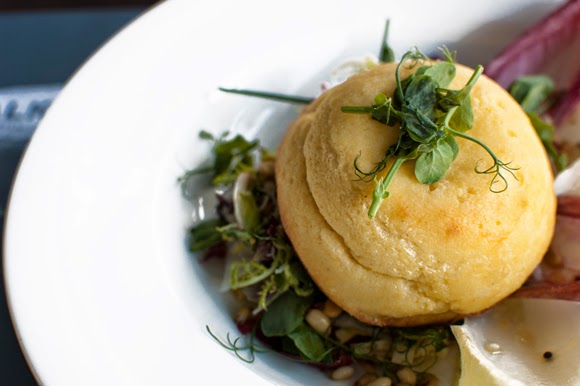 I was gutted as I'd hoped for the Ox cheek special for mains, (I'd really enjoyed this at The Wizard), but the supplier had let them down, so it would be a four hour wait on this. We settled on Crispy Belly Pork, Buttered Cabbage, Champ Mash, Cider Creams (£14.95) and the Blackened Cod, Curried Lentils (£11.95). The crispy belly pork had a fine fatty flavour and a satisfying crunchy crackling, but had been just left in the oven a touch too long leaving it a tad too dry. 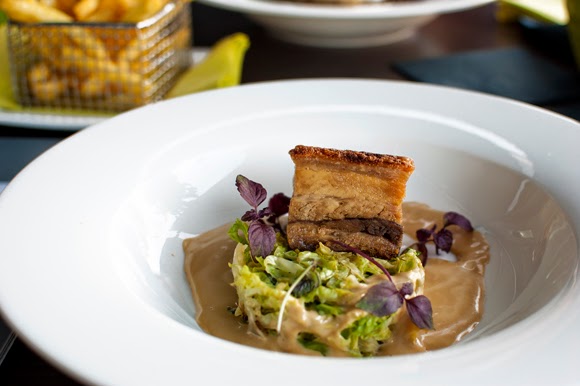 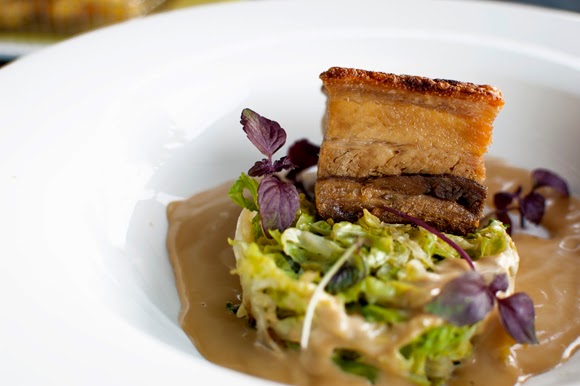 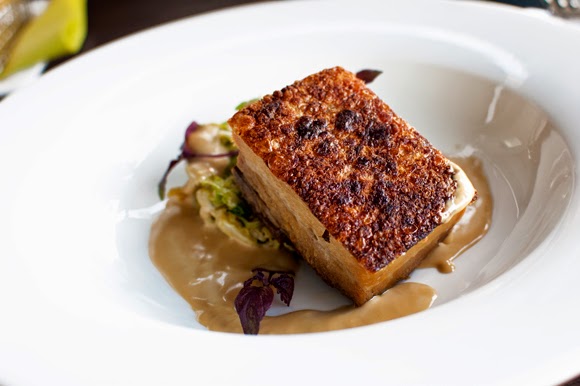 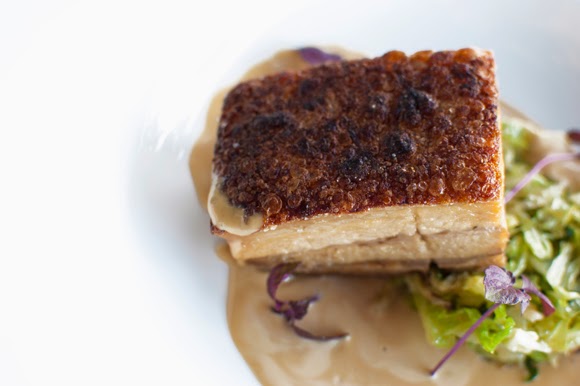 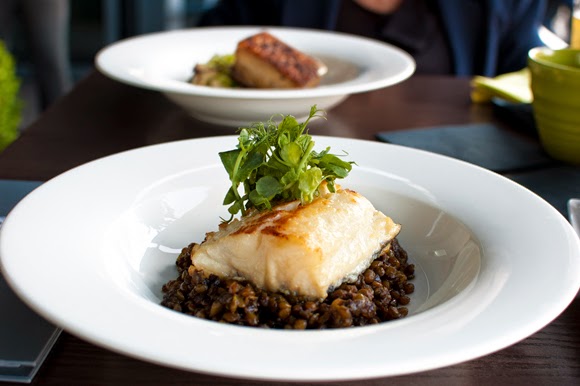 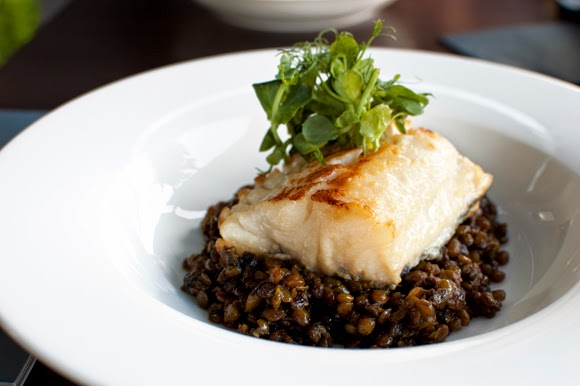 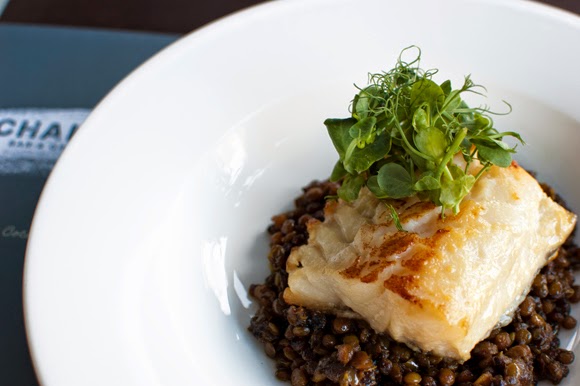 The Blackened Cod and curried Lentils was just right, nice and moist and juicy. Not quite as good as a recent similar dish at Australasia but at roughly half the price, it's a real winner. I noticed a few similar dishes to Australasia which isn't a bad thing at all. Like I said, they have clearly researched their market well, (at the top of mid-range I'd say) and the prices are fair too.
Onto the desserts, our lovely friendly waitress told us the Chocolate Fondant, Vanilla Ice Cream (£6.95) was her favourite. It was ours too. The Pear & Chocolate Knickerbocker Glory (£5.95) was pretty good as well. 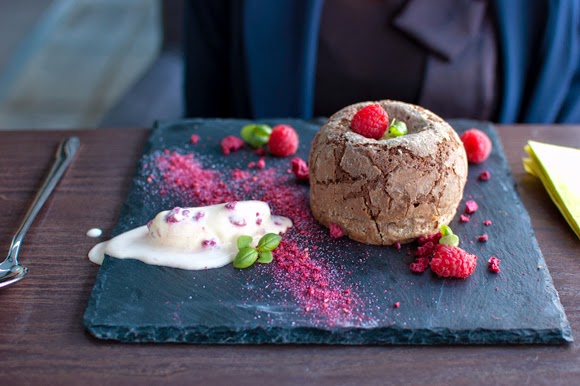 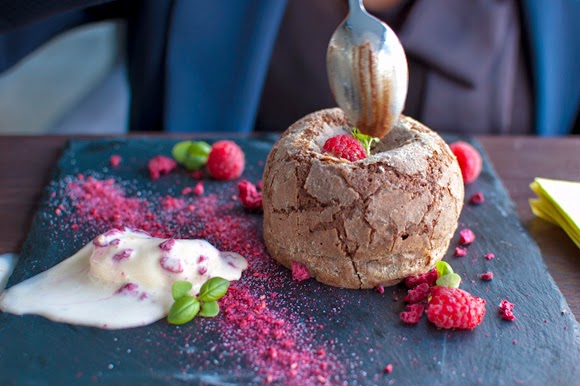 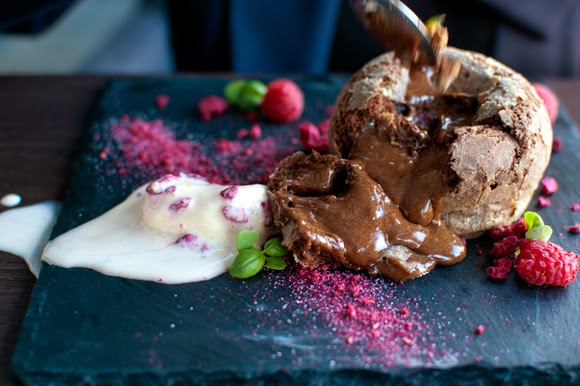 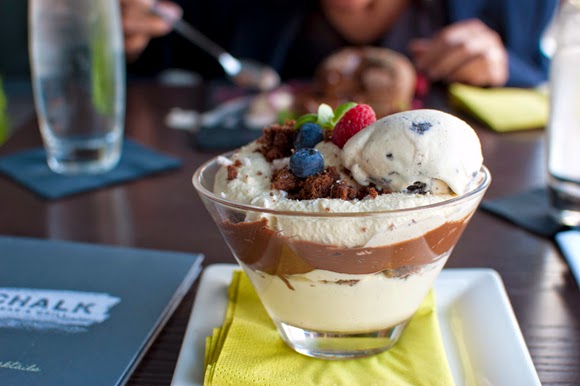 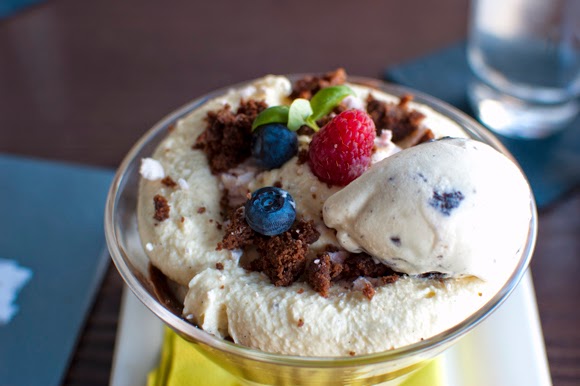 As we were leaving, the restaurant was really getting busy, and I hear they were slammed over the weekend. Apart from a few tiny quibbles, we really rated Chalk Bar and Grill, it was actually better than I thought it was going to be. It's a very professional and experienced team and the food for the most part was excellent (at this mid range level that is). I'd get it booked though if I were you rather than just turning up, I predict this place will be a huge success this summer as they seem to have got everything spot on judging it on our visit. 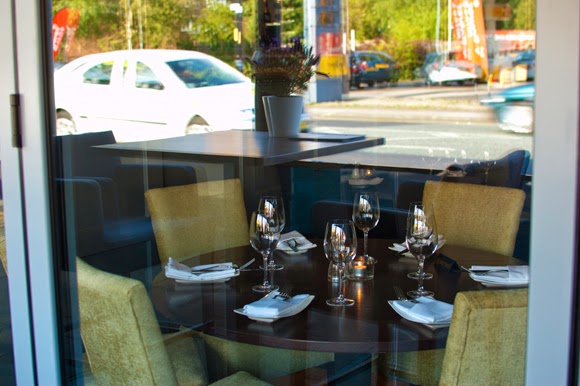