Part 2: Second helpings.
As someone who goes to quite a few of these restaurant soft openings, I thought it was fair to properly review Beef and Pudding when they were fully open and had ironed out any teething problems. Not as though there were any on our first visit, they seem to hit the ground running with a competent and happy team (we spoke to quite a few friendly waiters and waitresses), and perhaps a bit of luck helped too. They already run a few pubs in Cheshire, which of course is a big advantage, and have a good and experienced chef, Nicola Duncan who has previously worked at Parlour and Damson Media City. 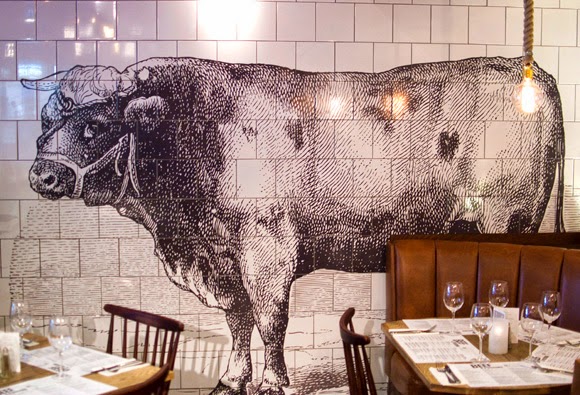 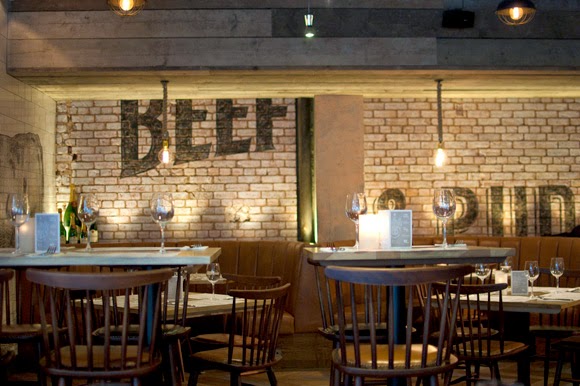 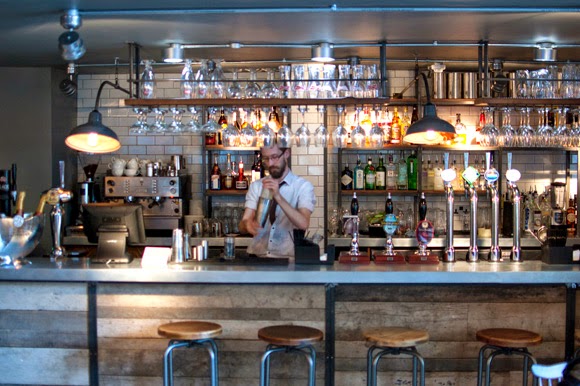 Also, if I come and and say it was totally brilliant on here (on the whole it was pretty damn good), plenty of cynics say, 'ah you would say that, you got it for free'. The fact is, it does influence you, getting comped meals, even on a subconscious level. You're bound to be happier in the first place, before you've even arrived, you're not paying!
So we went back on Friday as a fully paid up customer. I like the interior, it's similar to RedsTrue BBQ, slightly industrial and stripped back, but perhaps a little softer to my eyes. I don't like the giant twitter screen opposite the bar, it's incongruous and doesn't fit in at. But then I have a thing against giant screens in pubs.
I enjoyed a pint or two of Merlin Sir Galahad, nice to see three real ales on, to go with the proper British food. I'd like to see even more choice from the likes of say Thornbridge, Marble etc. A porter would go very well with the meaty dishes.
We went for the Pig Ribs again, which really are easily enough to share as a starter. Good value too at £5.95. 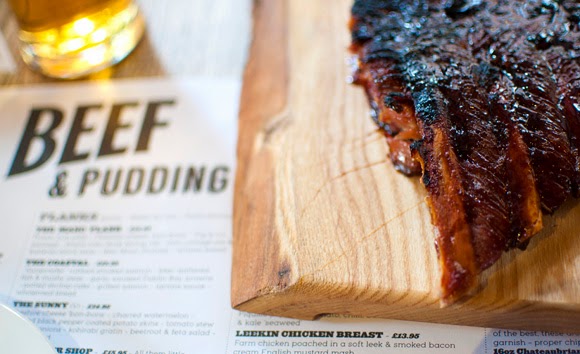 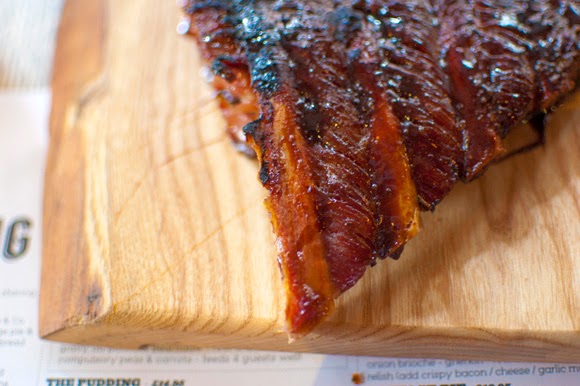 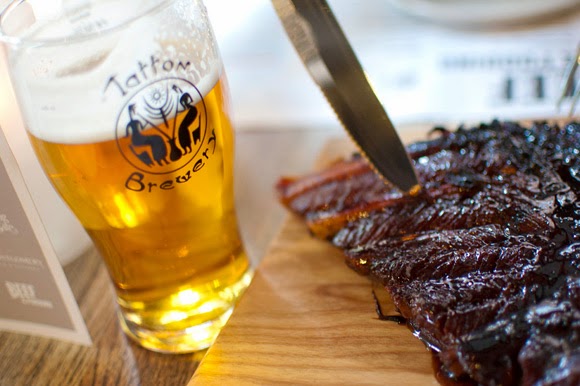 On the first occasion, the pork dripped off the bone, and the texture of the gooey meat was a sheer delight. So much better than the dry offerings at Reds. However on the second occasion, the ribs were a little drier than the first, although the burnt, chewy caramelised bits were the most enjoyable bit though, so that was the pay off.
For mains Mrs B had the Dublin Bay Prawn Thermidor again, which was our favourite last time. Perhaps a little steep in price in relation to the size at £9.95, nonetheless it's an agreeable dish. 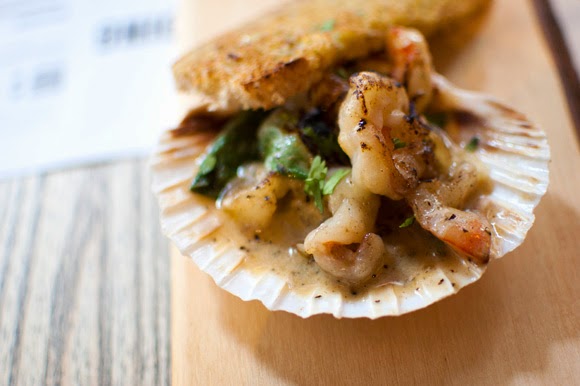 Second time again, it was not quite as enjoyable, less saucy and creamy and a little over seasoned perhaps. It's a matter of consistency, but to be fair, Friday was their first proper day and I'm being super picky here.
I had to go for their signature dish for mains. The Pudding; Beef & Barbon Fell venison suet pudding, horseradish paste, stockpot gravy, mash, black peas (£14.95). It's a big mighty meaty beast. 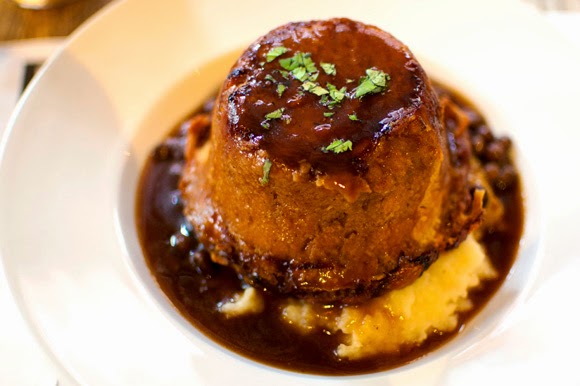 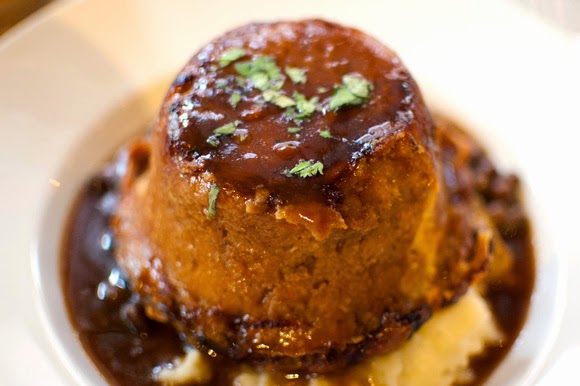 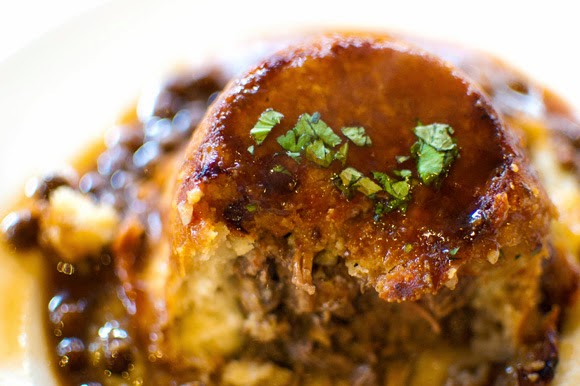 It was all good, although perhaps I'd have liked a little more moistness and gravy inside, I do like my puddings steamed and am more used to the softer suet, this was more like a proper pie with a sturdier crust. The accompanying mash and black peas worked well. I needed a lie down afterwards. We skipped the desserts.
It's easy to believe in the hype when a new restaurant opens, we've seen it before, with the likes of Reds and Lucha Libre. It's always exciting when you're in the buzz of a new restaurant. But then in hindsight you realise you were swept along a bit with the chatter and it wasn't quite as good as you wanted or expected it to be and it was over hyped.
However in this case, Beef and Pudding, was pretty much exactly how I'd imagined it. It fills a gap in the market in Manchester city centre, it's simply good Gastropub food with a slight twist. That uniqueness (in Manchester anyway,) keeps it one step above current competition I think (the Chophouses).
I personally would have preferred more unusual stuff like the starters (tripe etc) but there is enough to keep 'foodies' happy, and realistically, their big sellers are always likely to be the classics; beef pudding, the fish and chips, steak etc. The puddings are proving so popular, David Mooney, the boss (@gobbychef) had to drive up the M60 on Friday to get extra supplies.
In conclusion, I think it is likely to be a huge success, we enjoyed it both times (slightly more the first, it has to be said) and would heartily recommend it, if you can actually get a table that is. 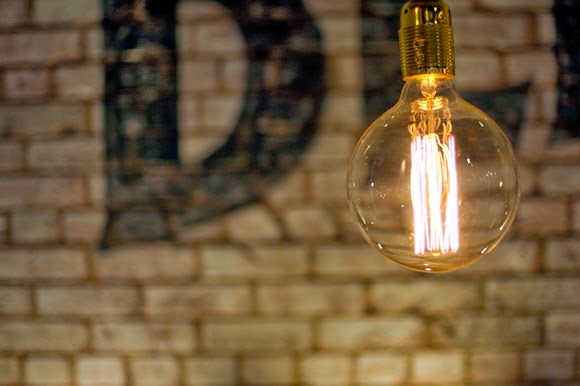 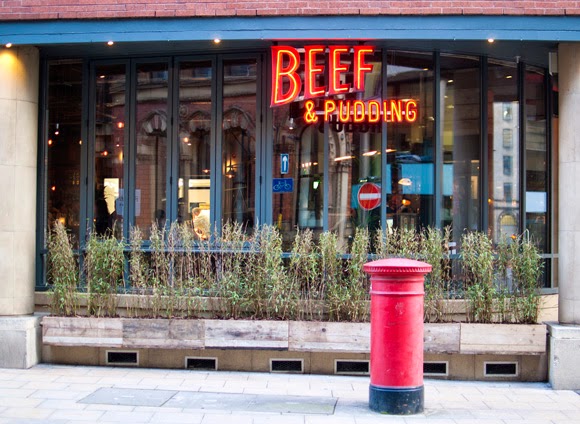 Follow @Bacononthebeech
Posted by Bacon on the Beech at 07:54