The Horse and Jockey, Chorlton.

I love living in Chorlton Green. I remember when I first came here 20 odd years ago, I can recall thinking then, that it was like going somewhere on holiday, pretty, quaint and leafy, yet only 20 minutes to the city centre. I've been living in the same little house since 1999, and still feel lucky to be here. Right on the green itself in the prime spot is the old Horse and Jockey pub. When we first came, it was completely rubbish, dodgy, tired and just unpleasant. There was always an inch or two of 'water' in the men's toilet. 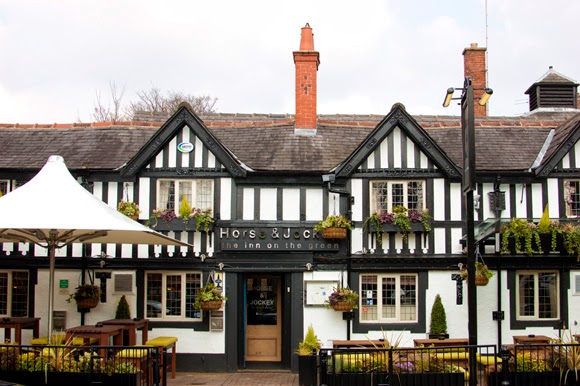 Then in 2008, the Hoi Polloi Pub Company took over and converted it. They did a great job, things were looking promising. Then the rot set in. Tales of bad management, unhappy staff, inconsistent poor service, crap food and erratic beer supplies were the order of the day. I remember being told by the manager that the giant irritating TV screen in one room had to be on all the time as it was 'a feature', despite the fact that nobody was there but us. (It's still there). I knew then that we had to part ways, it was not our sort of place, despite it being only a minute from my front door. The other customers tended to be 'Cheshire types' too, rather than locals, so we stuck to The Beech.
In 2012, Holts came in and made the owners an offer they couldn't refuse. They took the money and ran. (Who wouldn't?) I didn't hear of any massive improvements, they were keeping the on-site brewery (a good thing) and the local events going like the market on the green (another good thing). 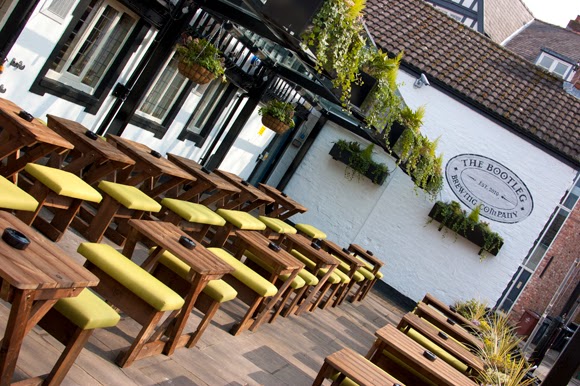 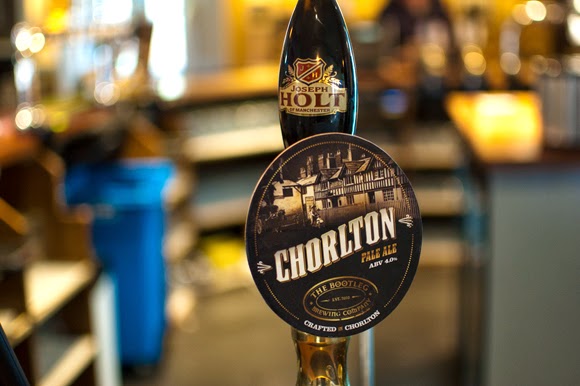 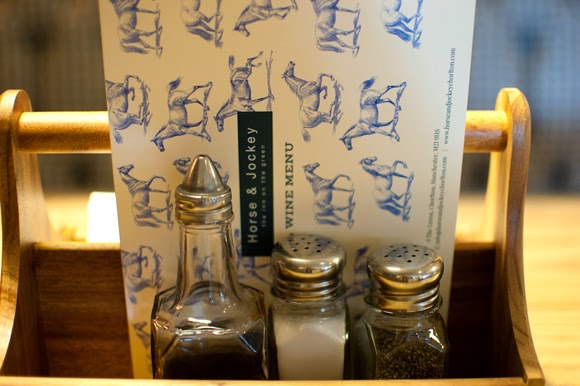 They're now promoting their new menu and refurbishment, so I thought I'd go and take a look.
First of all, the £750k refurbishment. It's a complete waste of money in my opinion. Hoi Polloi did a good job of the conversion and spent a lot of money, so it only needed a slight spruce up. Now it looks soulless, like someone's idea of a 'posh' gastro pub. They're calling it an ‘urban country pub, unnecessary new carpets, new floor tiles and upholstery don't make for a better experience, and within a month or two they'll be as worn as the previous decoration which is only a few years old after all. 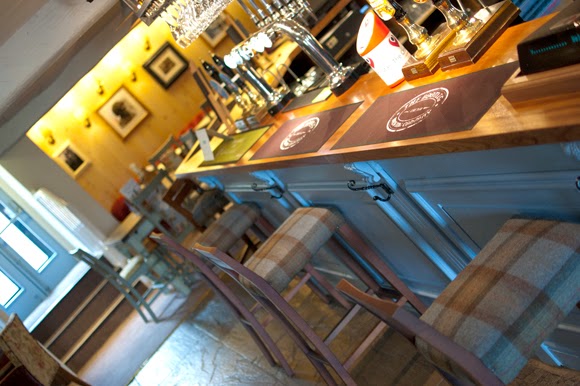 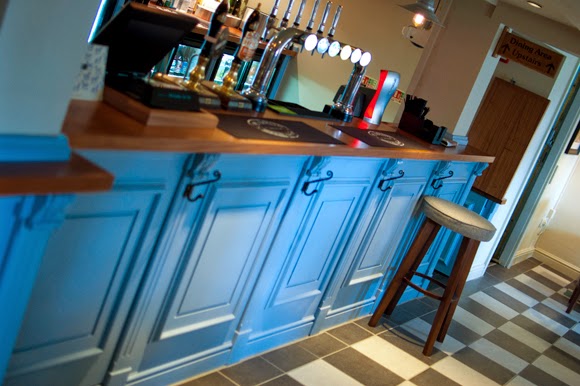 I've never liked the beer much here, but the Chorlton Pale ale wasn't bad as a light session beer. As they make it themselves on-site though, why is it as expensive as the other beer?
I took a look at the menu. It didn't look good. In fact it's the worst looking pub menu I've seen for many years. Ranging from the bizarre, (hanging kebabs), dated, (lasagne) and behind the times bandwagon jumping (pulled pork). It's like it's been designed by committee (it probably has) to please everyone but in the end it actually pleases nobody.
I ordered the Jockey's 'Famous' Ultimate Burger which comes with chips, it's priced at a whopping £12.75. Since this is more expensive than Manchester's market leaders Solita and Almost Famous, I'd expect it to be good and made properly on site.
Firstly, where does the meat come from? I know where Solita and AF get their meat from, and locally in Chorlton, pretty much everyone uses Frosts.
As part of the Holts group, I was told that they use catering suppliers Brakes which were contaminated in last years Horse Meat Scandal. But let's be fair here, many others were too (not local butchers though) and I guess they must have sorted it all out by now. I asked them where they get their meat from and they told me Birtwistle's who are apparently are a local butcher who supply to the hospitality trade.
I'd prefer it if I actually knew the provenance of the meat and I want it to be local ideally. But I would forgive them if it actually tasted any good. I took a bite of the giant burger.
First of all, the bun fell apart, literally disintegrated in my hand indicating poor quality catering bread. The meat was absolutely dreadful. I took another bite to make sure. It had a weird solid uniform texture and tasted just like those old Birdseye burgers did in the 80's. I actually think it was worse than McDonalds, it tasted and looked completely processed. I'd hazard a guess that it's not made on site, but by the suppliers and reheated, all for just under £13. Again I'm happy to correct this assumption if this is not the case.
When you eat burgers quite often as I do, you end up thinking most are much of a muchness, (with a few exceptions) but this was something else. I think it's the worse thing I've ever eaten since starting this blog. There was also chicken on it which tasted simply of nothing, it was as dry as a bone. The bacon was soft and flabby rather than crispy. The chips I quite liked. I left most of the burger in the stupid bucket from which it came (is this so you can be sick afterwards?) I must reiterate this, I never leave food either, but I couldn't stomach it and I regularly eat doner kebabs. 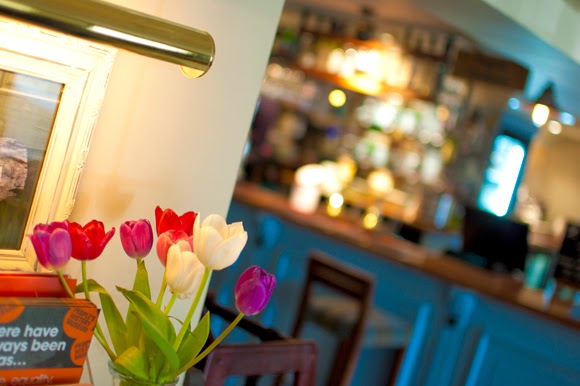 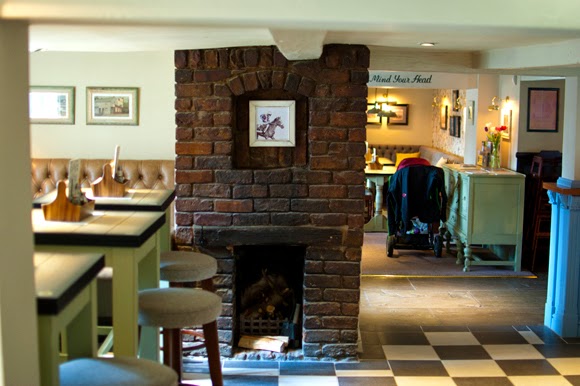 The Horse and Jockey is a completely lost opportunity and the new refurb is a total waste of money. The cash would have been better spent doing things properly. Employing a proper decent chef, ditching the poor catering quality supplies, and buying local. This is Chorlton after all, we have some amazing produce in Frosts, Barbakan and Out of the Blue, plus it's full of tree huggers round here, people are looking to buy local when they can especially after the horse meat scandal.
They just don't get it at all, we don't want a 'theme' or a 'concept', we don't require it to be 'poshly' decorated either. What we need is a great local pub, serving a small fresh menu of proper quality British classics, a decent selection of fairly priced beer and good service. The Horse and Jockey right now is none of those things, I don't think by the very nature of Holts being a chain, that they can ever deliver this, which for us locals is quite sad. We deserve so much better than this. 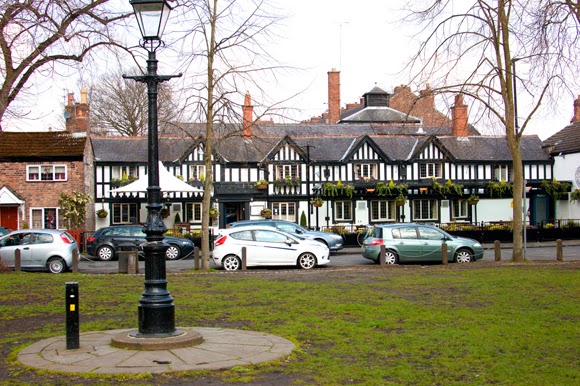 I've kind of given up scoring these days as I can't ever decide what to give but for this one time I'm bringing it back I was so disgusted.  1/10.

Follow @Bacononthebeech
Posted by Bacon on the Beech at 18:32