The Shoulder of Mutton had been on my 'to eat' list for quite a while, even before I started this website. But with one thing and another, it had slipped from my mind. After a brief spell at Northcote, chef Chris Yates has returned and is now the full owner. I'd heard very good things. Franco, owner of Solita reckons he's one of the most talented chefs in the north west. So we were really excited to visit on Sunday. 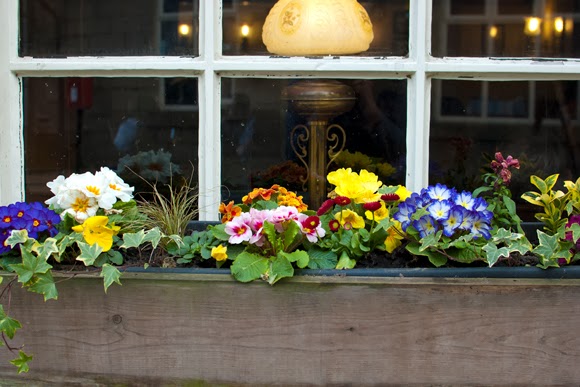 It was a beautiful spring day and we really did see Ramsbottom at its very best, embarrassingly I've never even been there before, even though it's only half an hour up the motorway. We were first in the group of people waiting for it to open. First impressions were excellent, a lovely warm welcome from FOH and a seat by the fire. Lots of dogs too, which I always judge a pub by, including a poodle with a mohican, which I stupidly forgot to photograph. 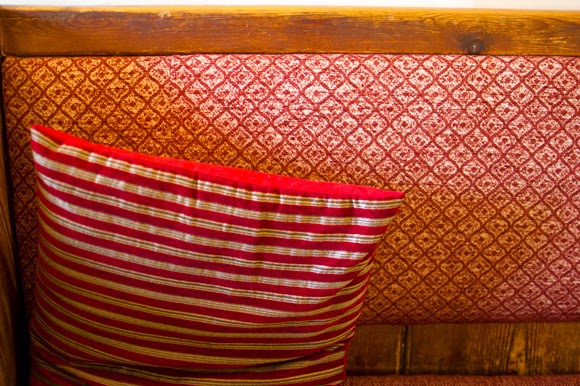 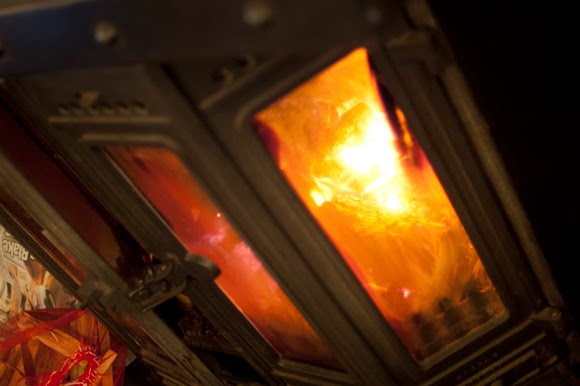 We went straight onto ordering, pre-prepared as usual. The taster menu is a bargain £38 for 5 courses, but we did a few swaps and additions, as there were a few things too good looking to miss. We started off with a selection of breads. 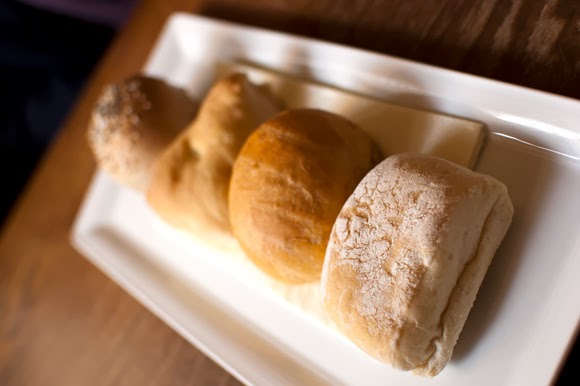 These were good, but I'd prefer just the one type that's much crustier and crisper. I could tell straight away though that with this little detail that we were onto a winner, especially when our first additional course came. Morecambe Bay Hand Picked White Crab, Cauliflower Flavours, Spiced Beignet (£7.95) actually wowed us, and as I always say, it takes quite a bit these days. It was the presentation and the delicate flavours, superb! 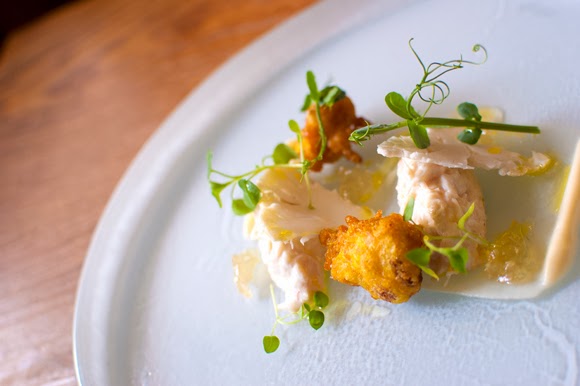 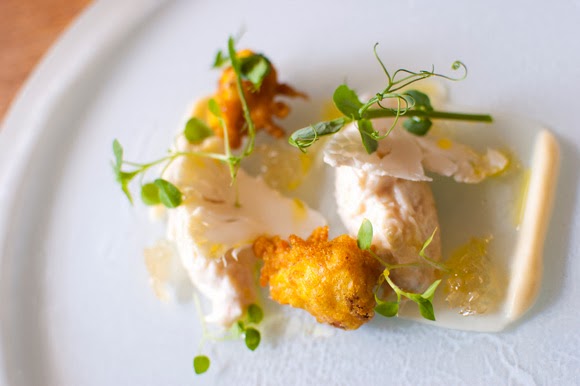 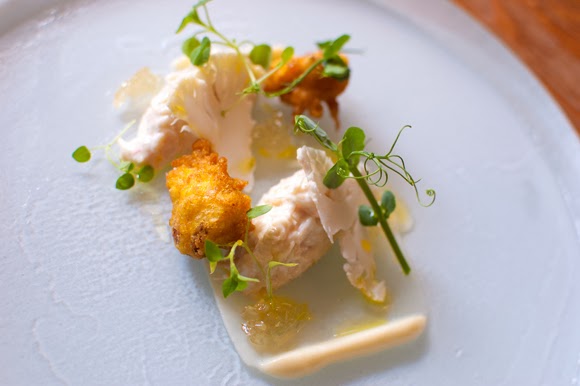 White Onion Velouté, Bacon puffs, was the first course on the taster menu. Immediately it reminded me of a dish at two star The Square in London. 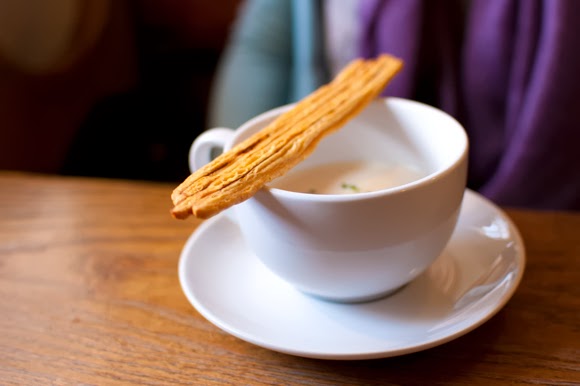 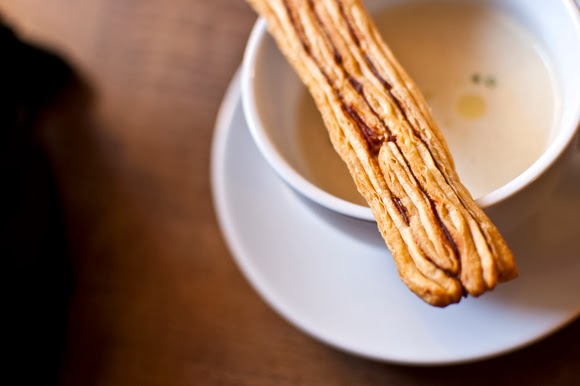 The taste wasn't far off either, the velouté; super creamy and silky and not over salted, just spot on. Note the streaky bacon is inside the puff pastry and rolled through a pasta machine. We looked at each other, incredulous that we were in a traditional looking pub. Everyone else around us were eating great looking food, big portions of fish and chips, big yorkies etc. I'm guessing this pays the bills, but the stuff we were eating was on another level.
Beetroot Textures, crispy goats cheese was ok, but having the goats cheese in breadcrumbs renders it a little dry. We thought a parfait would have been better. 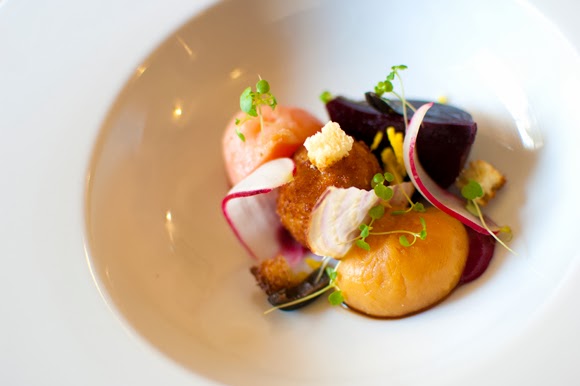 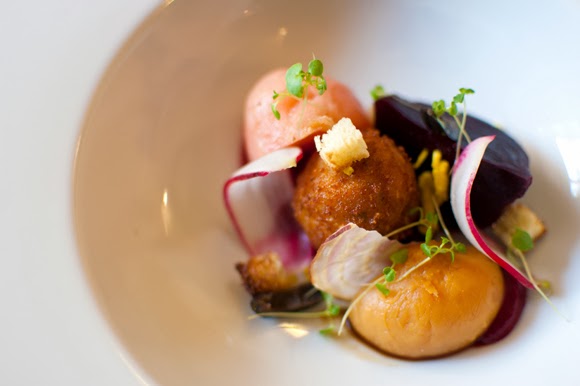 Scorched King Prawns and Tempura, Pickled Celery, Blood Orange was another good one. Apologies for the name drop again, but the prawns cooked like this, were a little like the taste of the signature dish at Alkelarré in San Sebastian. It is worth making a comparison, especially when it's with a three Michelin star restaurant! 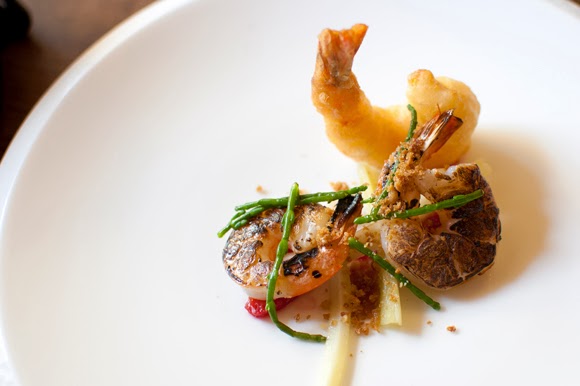 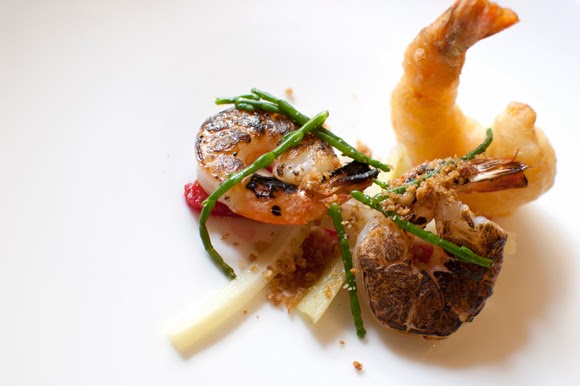 We had another additional course next to share; Black Pudding Potato Cake, Hazelnut, poached egg (£6.50). I had to persuade Mrs Bacon to go with me on this one. 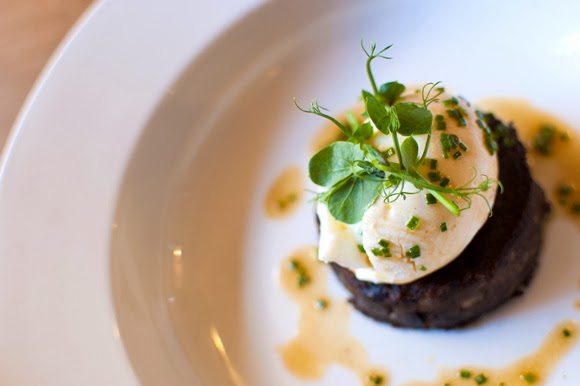 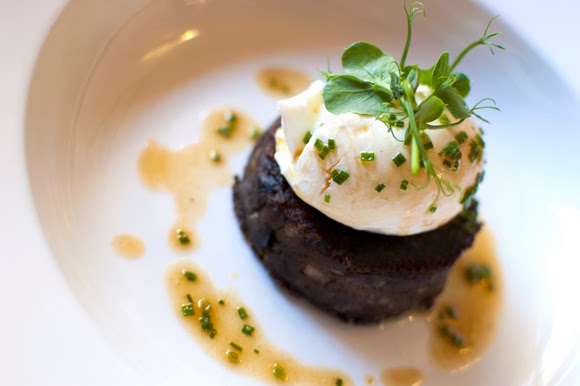 We're both of the opinion that Spanish morcilla is much better than British black pudding, as it has a better texture and flavour. However this was the best black pudding we've ever had in Britain. It was wetter in texture which really improves the flavour too.
Next we decided to swap the wood pigeon as neither of us are convinced of its merits, having been unimpressed before, elsewhere. We were very pleased with the replacement, the 24 hour Confit Pork Belly, Crispy Quinoa Pigs Cheek, Parsnip Purée, Apple Spheres Compote, Buttered Kale (normally £16.50). We'd recently had a very disappointing pork belly dish locally, this was streets ahead, the best since Sticky Walnut in Chester. A really lovely plate of food that I could eat every day of the week. I actually prefer it to a good steak, truth be told. 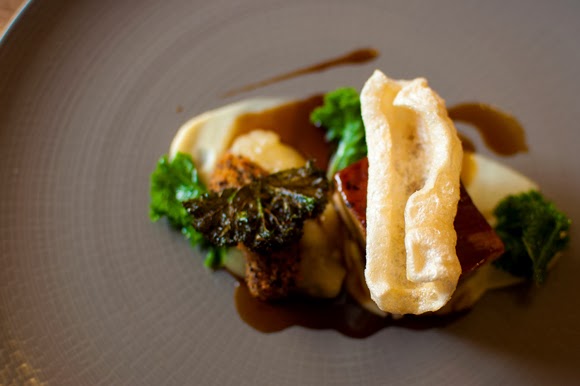 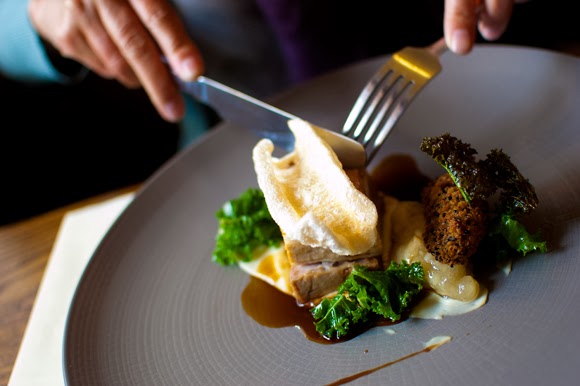 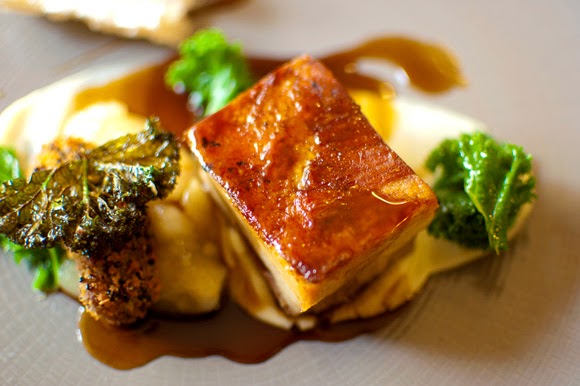 Next, four cheeses (some were Lancashire) and finally a very pleasant sweet Lemon Meringue pie. All this was served brilliantly by Dan, Chris's brother who really looked after us (I wish I'd been that focussed when I was his age). 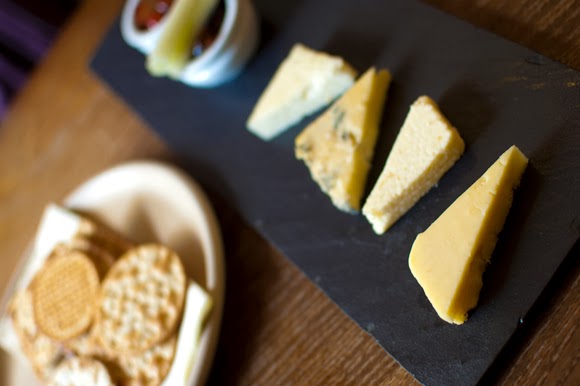 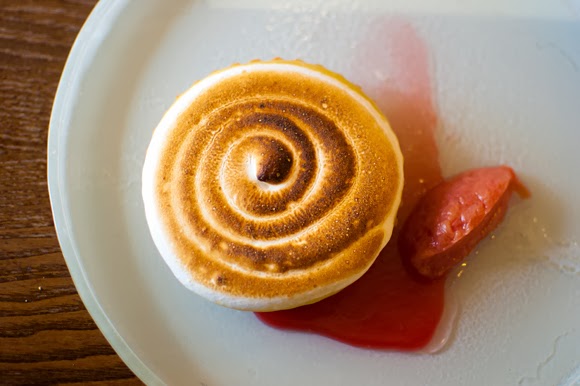 In conclusion, we really loved Shoulder of Mutton, the surprise at how good the food was, was part of the absolute pleasure of eating there. Chef Chris Yates is clearly extremely talented, the food he is producing is fantastic. I highly recommend that you take a visit for yourselves if you've not been before as it's clearly one of the best food pubs in the north west. 8/10. 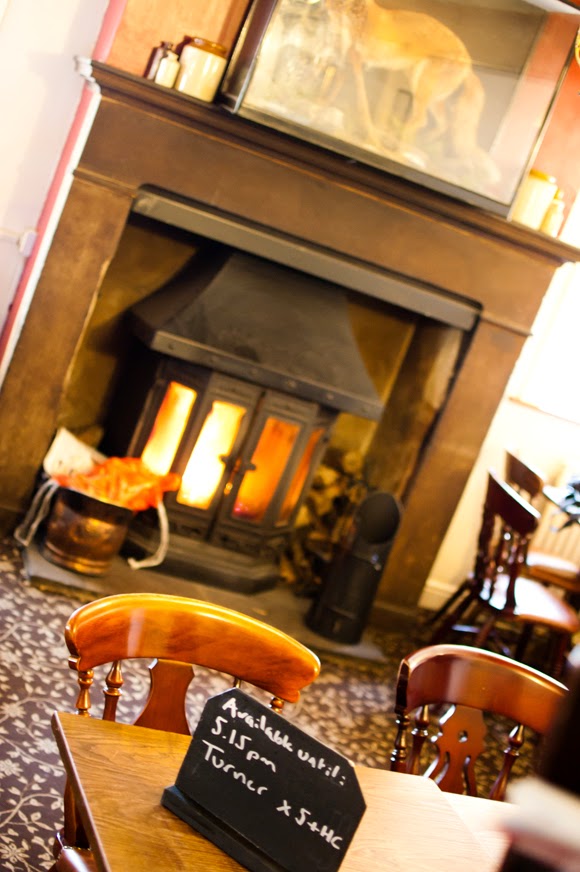 To see the photos in higher resolution click here.
This review was brought to you in association with Match.com’s Manchester dating page. They have no editorial input.