We returned from Spain the other day at midnight, I was still in sandals, it was bloody freezing; outside temperature; zero degrees. (We had been used to about 27˚ that day). It was quite a bit of a shock I can tell you. It was a lovely day though yesterday, it really felt spring like for the first time this year.
My parents came up to bring Sam back and we took them to the Chorlton Green Brasserie. It seemed a good excuse to visit since they're under totally new management/chef and FOH. Sadly for us they have a new dog policy as well; they're allowed in the day but not in the evening.
Our last visit here was not so successful. The old team moved on to concentrate on their other place on Beech rd, the seemingly ever popular Laundrette, leaving the quieter Brasserie behind. In my opinion it didn't work in its old form; it was too expensive and the food simply wasn't good enough. 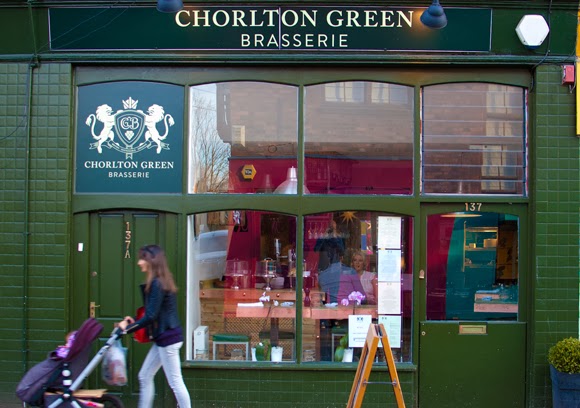 Honestly, this new menu didn't excite me too much either. They'd asked for people's suggestions on twitter on what dishes we wanted to see. I thought this was a good idea in one way (commercially) but in another, not so much. Do we really need scallops and black pudding again? Still? Surely the chef has some more original ideas of his own? 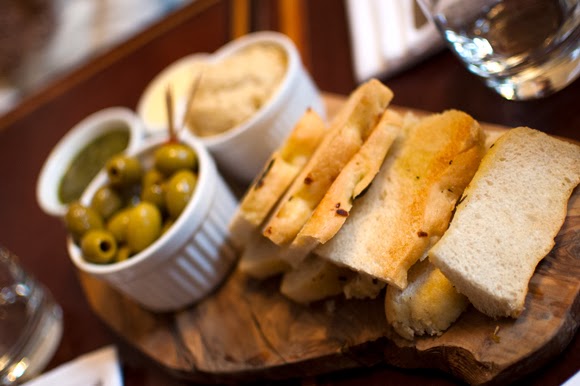 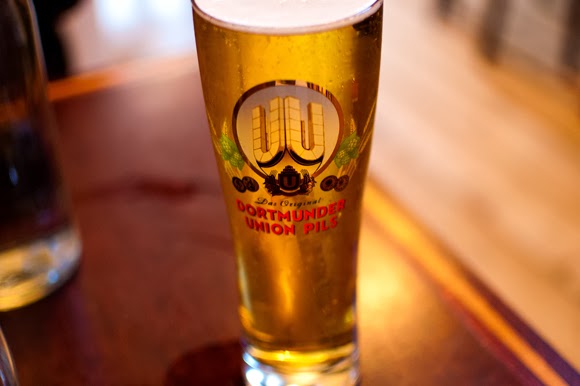 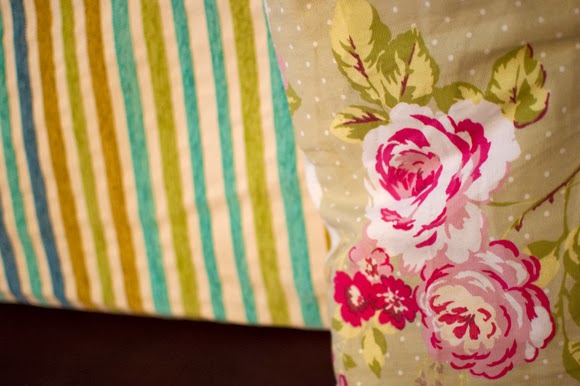 But it was worth giving it a go. First impressions were great. They've simplified the interior, kept the cute little touches and the new waitress Anne-Clare was and is charming. They've now got a decent pilsner on draught; Dortmunder Union.
They brought us some free bread, olives and dips. My Dad is 80 today and tried hummus for the very first time; he loved it. They even noticed when we needed some more as I'd snaffled most of it. The bread's from the Richardson Bakery a few doors down. The meat, unusually for these parts is not sourced from Frosts but from Glynn Brothers in Partington.
We skipped starters and shared three mains. Wild Mushroom and Asparagus Risotto with Rocket, Parmesan and Truffle (£8.95) was pretty good, though a little too sticky and heavy, I'd like a little more lovely broth so it's more moist. I heard the chef scolding our waitress; 'don't give them a spoon unless they asked for it!' We didn't ask and didn't need it. 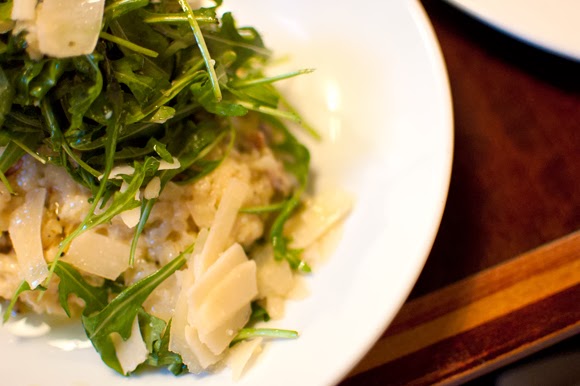 Pan fried crispy Pork Belly stuffed with Bury Black pudding served on Lentils and Bacon with tender-stem Broccoli, jus and Pork crackling (£12.95) was the dish that I'd suggested as it had been so good at Sticky Walnut (the place I'd ideally love right next to me on Beech rd). This looked similar but sadly was overdone and over dry. 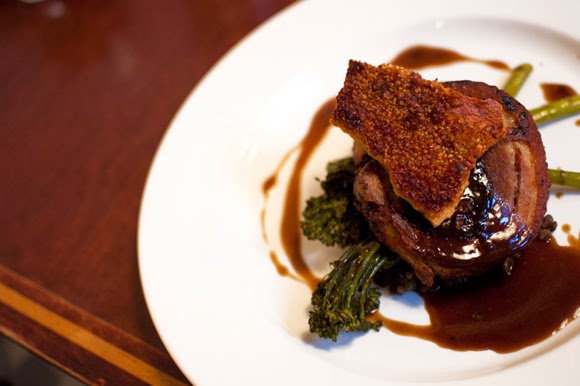 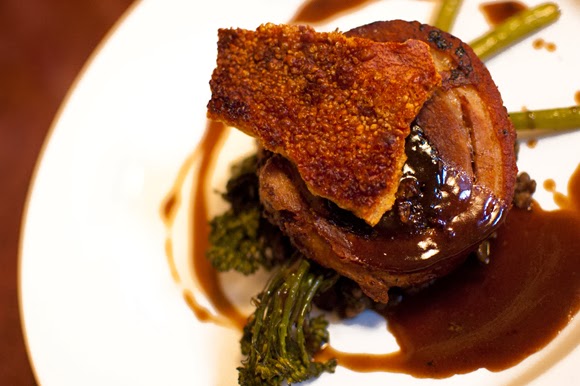 Pan fried fillet of Lamb (served  pink) with Butternut Purée, minted Greens, Sautéed Potatoes, Jus and Pea shoots (£15.95) was much better, this was Mrs B's choice as it's not my favourite cut this, I prefer something with a bit more fat myself. 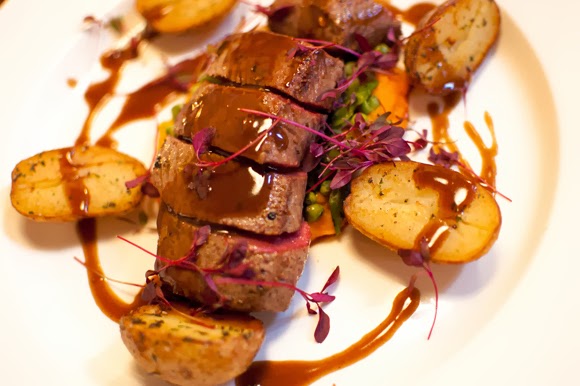 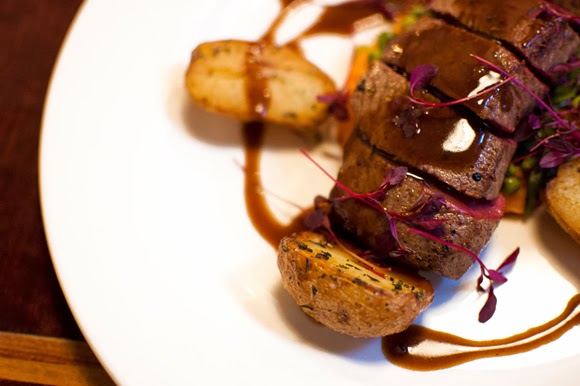 Mum and Dad both loved their Medallions of Beef too (both too dry but they had ordered it well done and medium to be fair). We were too full for puds and got the bill; just under £70 for 4.
It's such a hard business opening a restaurant. If you've seen The Restaurant Man on TV you'll have seen all the elements that need to be right. Some people criticise bloggers for being overly positive, but they may not necessarily see the other side as I do. I personally don't want to be a tw*t. Being constructive and hopefully fair is much better than scoring petty points against somewhere that more often than not, are trying really bloody hard in a very hard business. 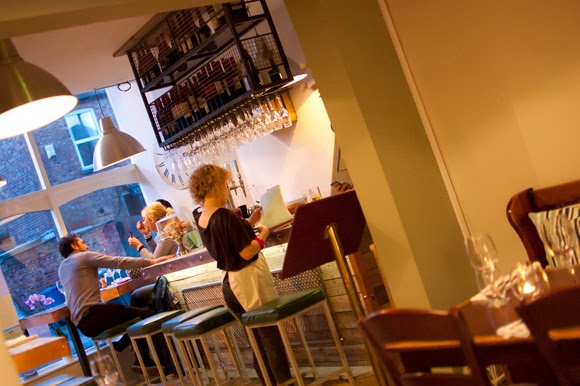 This visit to Chorlton Green Brasserie was so much better than the last one, the new team are really giving it a proper go and they have quite a few things right in my opinion. The service was excellent, the food showed promise (I'd love it to be as good as Sticky, but perhaps comparisons are unfair at this stage) and the interior is spot on. Personally, I would like to see a slightly more interesting menu like say Volta in Didsbury (a lesson in how to open a restaurant right there) and I think they'd get a lot more custom if they introduced an early evening set menu (Chorlton likes it cheap; my advice to anyone opening here).
But otherwise promising and definitely worth giving it a go.
5/10. 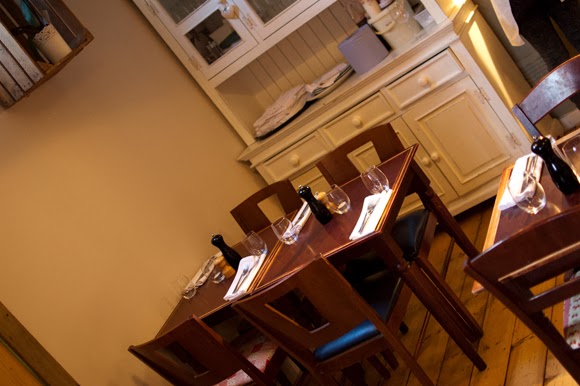 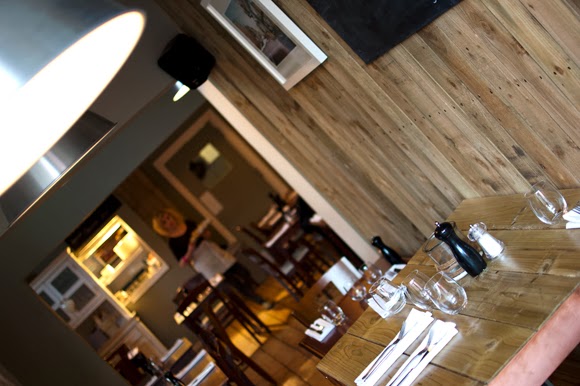 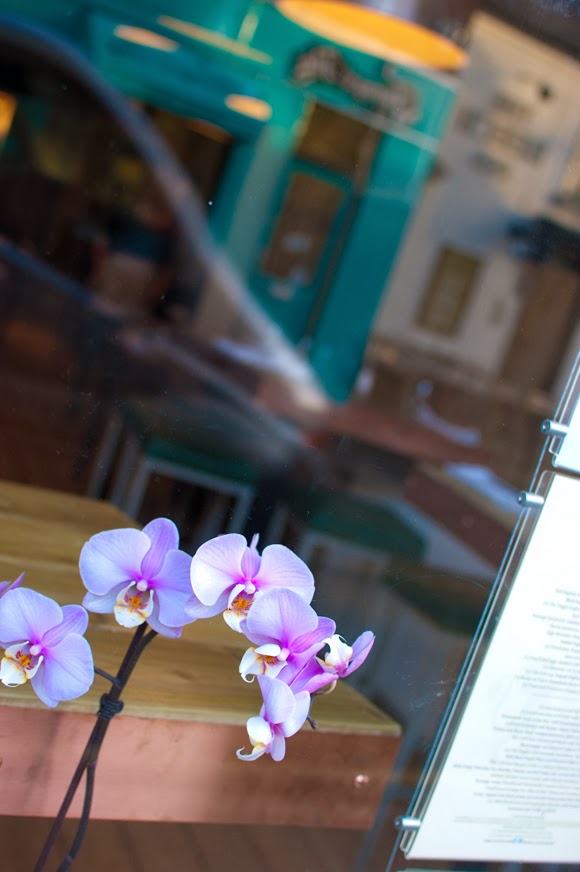 *This meal was kindly paid for by my Mum and Dad. It didn't alter my feelings for them or for the Chorlton Green Brasserie.

Follow @Bacononthebeech
Posted by Bacon on the Beech at 08:29