When Australasia opened three years ago, the Manchester restaurant 'scene' was very different.The French restaurant didn't exist (in it's current superior form anyway) and there was no Mr Coopers, no Solita and no Almost Famous. So when Living Ventures opened Australasia, it was a jewel in their crown and quite a big deal. I think local journos were mostly beside themselves with how good it was. We liked it too, went a few times and enjoyed it. But we never went back, there were too many other new places to try and it faded from my memory a bit. I thought it wouldn't be quite as good as I'd remembered it. Besides, it wasn't really our sort of place with the 'glamorous' people and the DJ with loud music etc. I also like cheap eats and I like really high end, (when I can afford it) and Australasia falls somewhere in the middle. 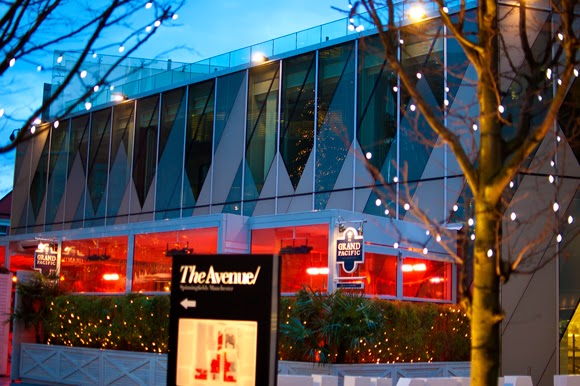 Since then LV has gone from strength to strength with the opening of Artisan, and Manchester House, plus a sales figure of close to 50 million this last year. The boss Tim Bacon in a speech at Manchester House said that Australasia was still somewhere close to his heart. So when we were invited to the 'extension' Grand Pacific, we jumped at the chance. Who wouldn't? 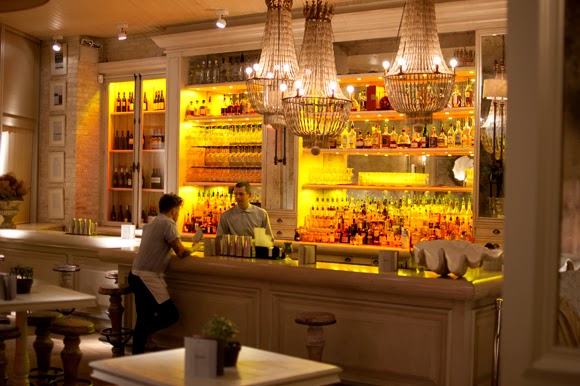 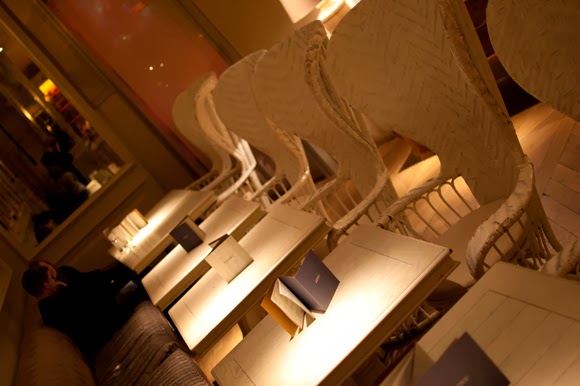 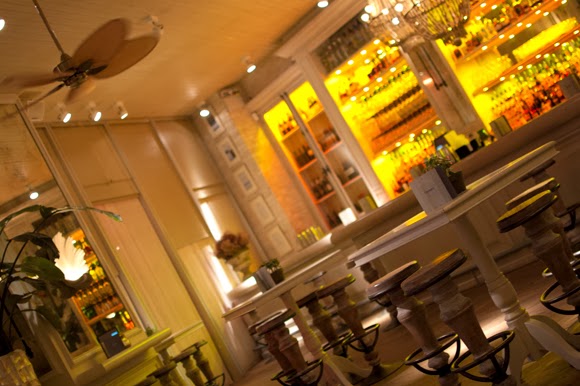 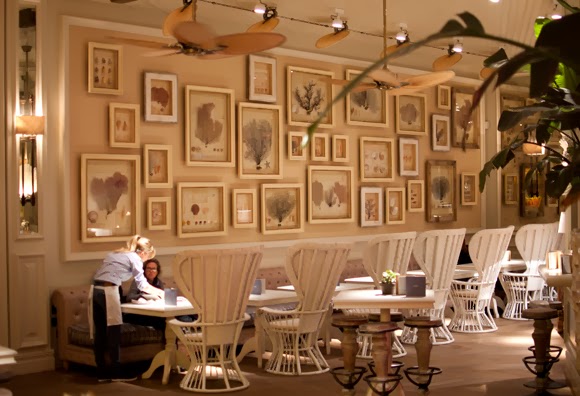 It's almost like a separate restaurant, they serve pretty much the same menu, but they also do an Asian 'high tea'. The design is as bling as you'd imagine from LV with a colonial style twist. We liked it, and the heaters were blasting out making it lovely and warm despite the chilly conditions outside. We still sat in the inside bit as Mrs B is well nesh. (There's also a large outdoor terrace that's now been fully weather proofed). 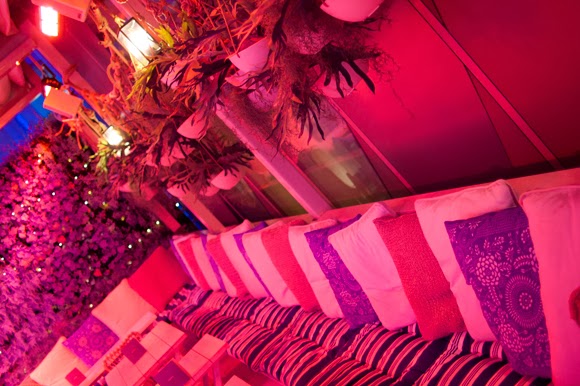 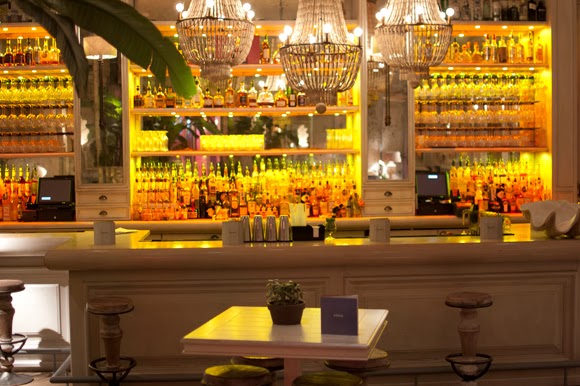 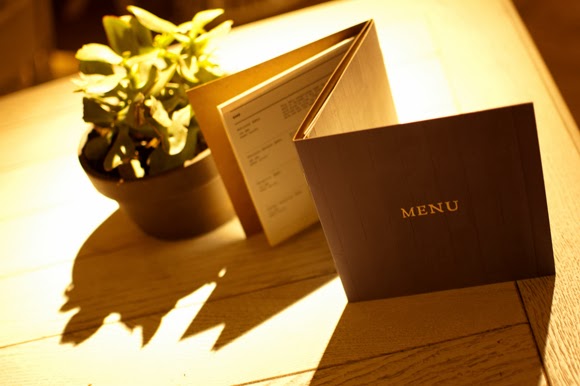 Onto the food. We had; A Mixed plate of filtered Cornish Oysters (Soy pearl, chilli, coriander, shallots and mirin, £12.50) As always with oysters, I prefer them naked, one of these (the chilli one) was way too salty for me. You don't need to do anything with them, they're superb as they are and as good as you'll find in Manchester. 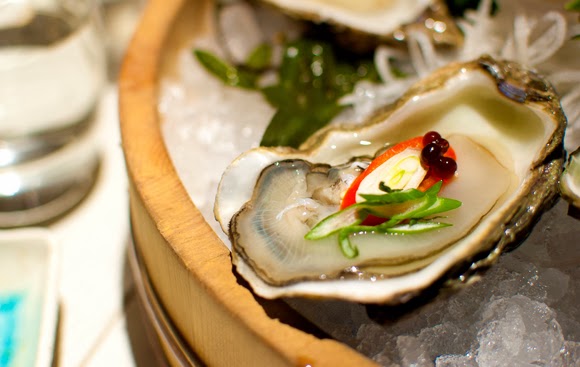 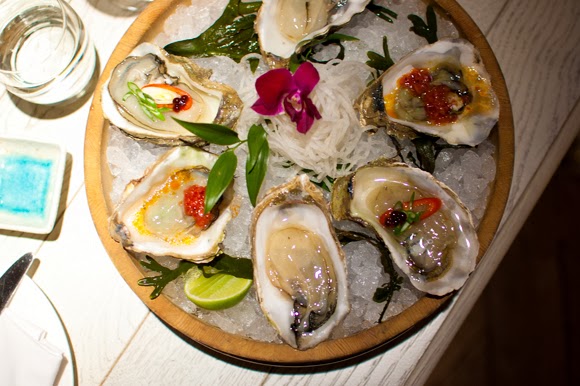 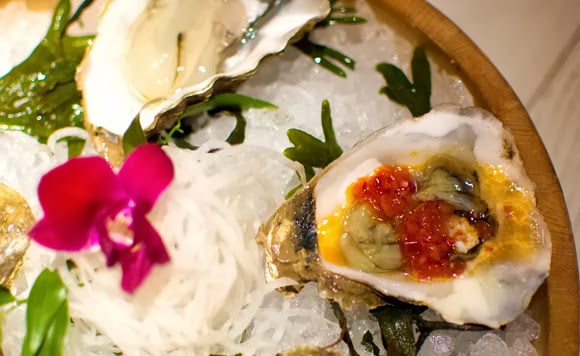 Then a mixed plate of Sushi and Sashimi (14, £25). This was all good but as were were sharing,  it was tricky to split them up as there were few duplicates, so I never felt that I could get properly into it. 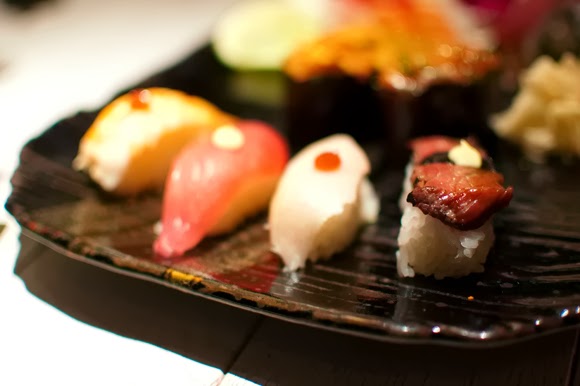 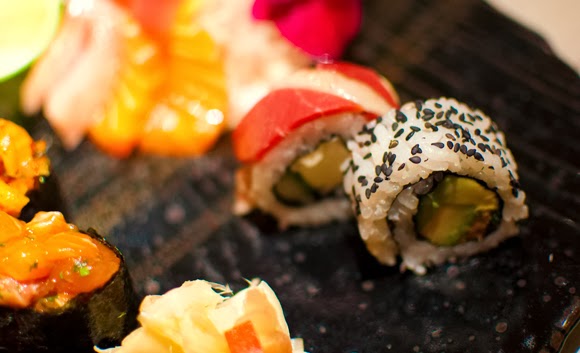 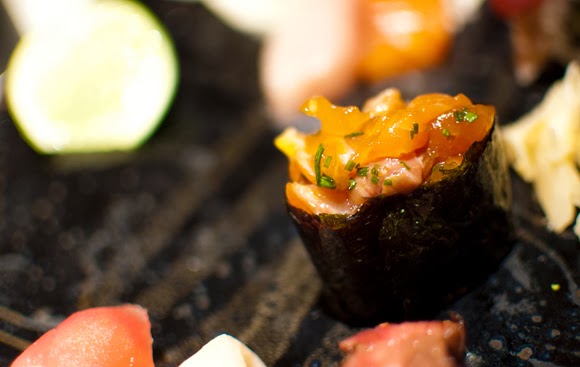 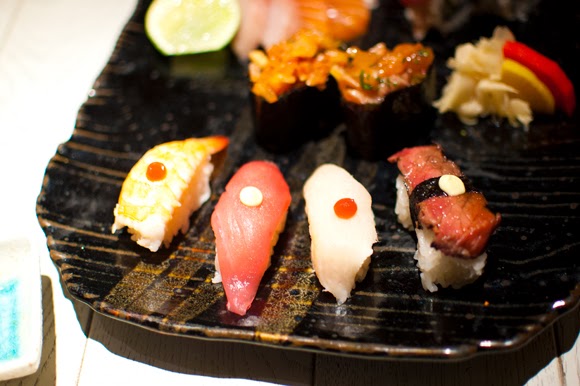 Then we had some mixed plates; Soft shell crab Tempura (£12.50). Gorgeous, crispy and light. 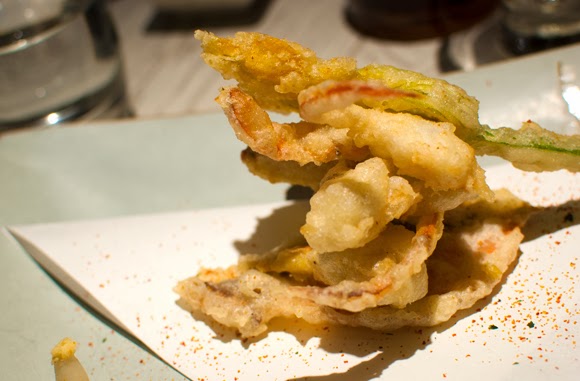 Tuna tartare. (£8.50). A lovely simple dish. You know I love burgers, but it was nice to eat some grown up food like this for a change as well. It was a little too salty again for us though. 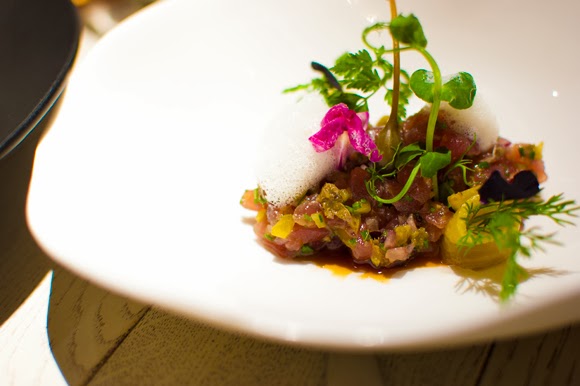 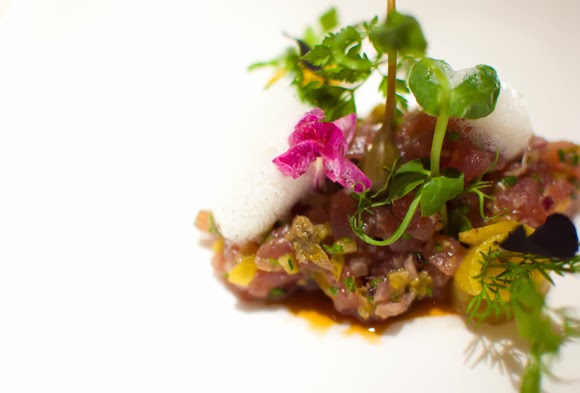 Roasted foie gras with pickled rhubarb. (£13.50). You might also know that we love foie and this was an excellent dish. Our favourite of the night. 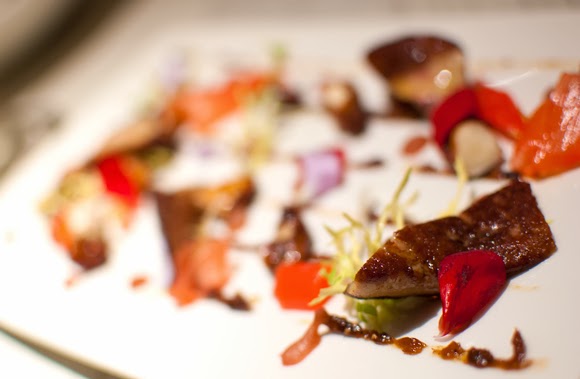 Hand dived scallop ceviche with tiger’s milk. (£14.50). Mrs B really liked this one, I couldn't see it myself. I think it needs tweaking as it was a little unbalanced in flavour for me. It looked impressive though in the fish bowl. 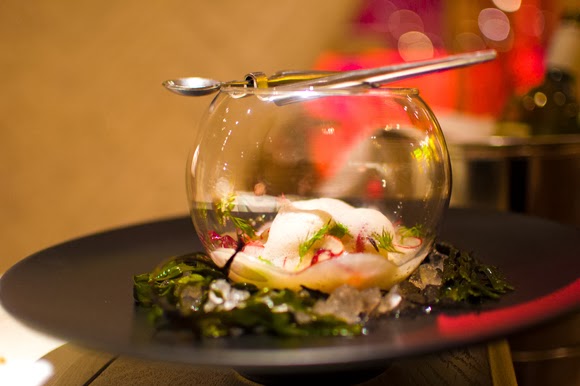 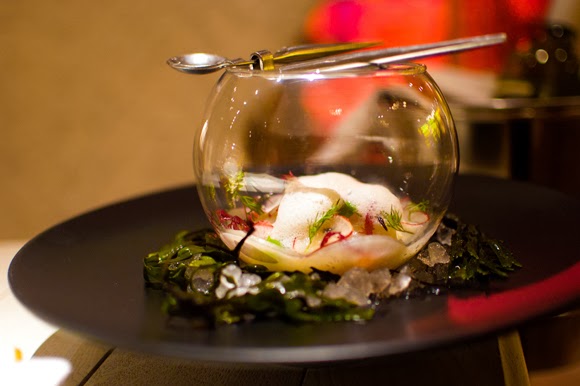 By the time the puds came, (all £7.50) and after a few superb Smoky Old Fashioned Cocktails, (they are really smoky), things get a little hazy, but I remember the Mango soufflé with coconut ice-cream and mango soup from our previous visit to Australasia. If anything it had improved over the years. It's a real winner this dessert. We also really enjoyed the Lemon crème brûlée with raspberry sorbet and the Garden buttermilk panna cotta. 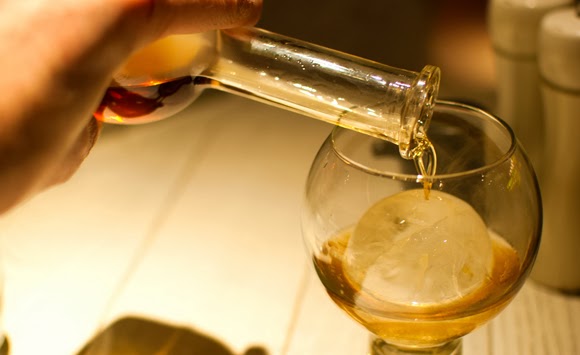 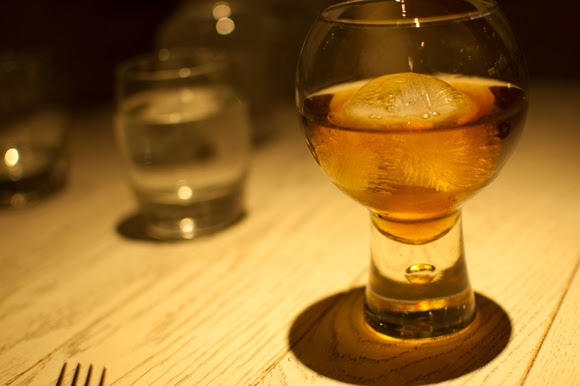 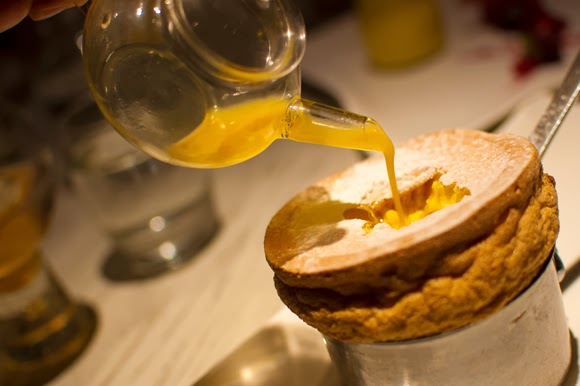 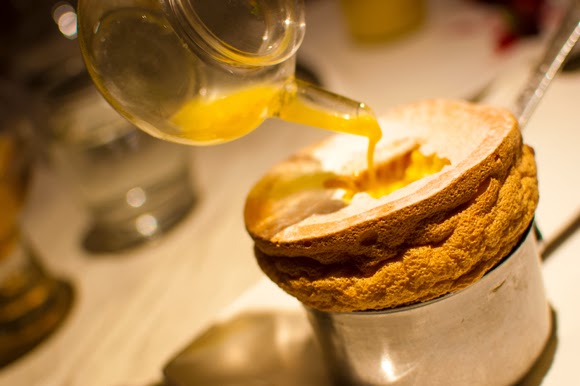 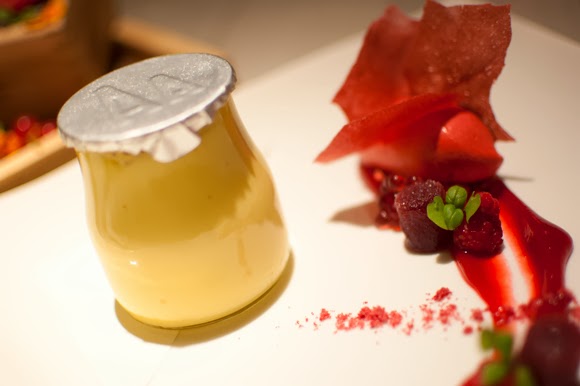 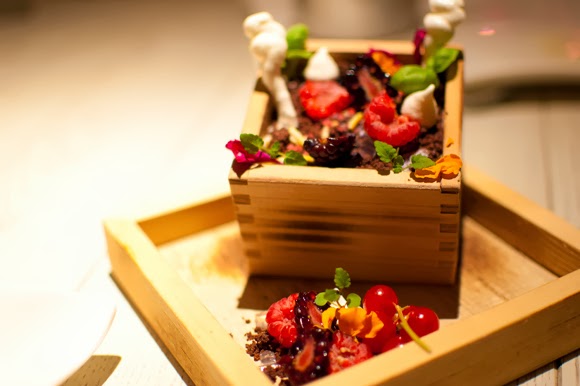 We were pretty impressed with Grand Pacific, it was much better than we'd anticipated, so sometimes you can go back, as it was as good as we remembered Australasia to be. I also think that we ordered well, you can't really go wrong with oysters as long as the produce is high quality, but the other stuff was good too. The prices do mount up though, so it's the sort of upper mid range restaurant you might go to with a group for a special occasion and fine cocktails unless you're loaded that is. If you already know Living Ventures restaurants, you'll know what you're getting here, they're slick and glossy and very well run on the whole, but the food for us on this occasion was as I said, very decent too.
As we were there super early (as usual), I was at home by 7pm watching The One show, very 'happy' after another successful evening of eating and drinking. So where to next? 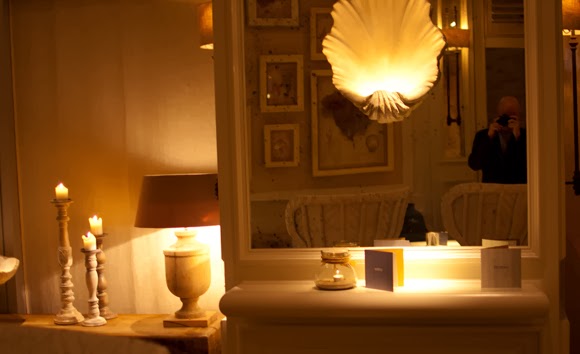 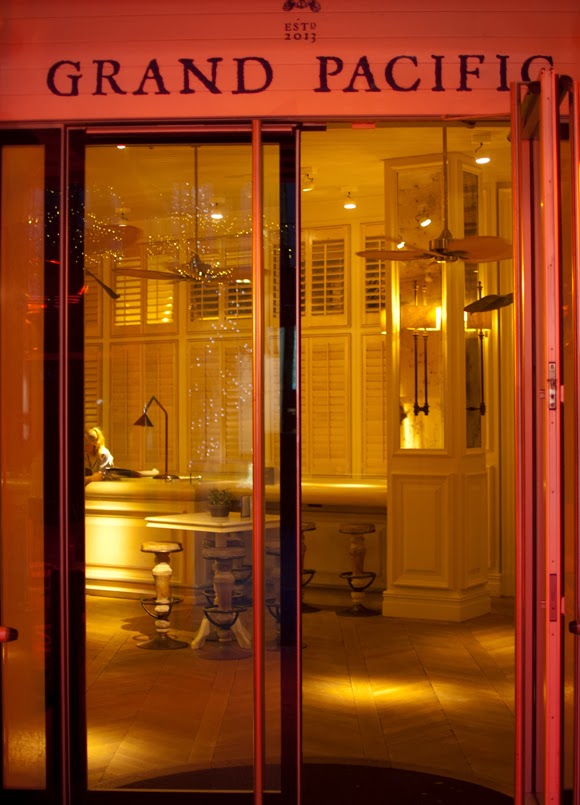 Price: By invitiation for us*, but it's not the cheapest place in town.
Service: Our waitress Emma was lovely.
Food: Good.
Star dish: Roasted foie gras with pickled rhubarb.
Score: N/A

* I always tell the truth, see my Rosso review for details.

Follow @Bacononthebeech
Posted by Bacon on the Beech at 07:30