When I was a kid and we used to take trips to London, we'd eat in Pizzaland, a now forgotten chain that seemed to be everywhere. We loved it; it was my first taste of pizza. Now when we go (once or twice a year), we have to try and replicate this childish excitement by eating at well chosen (probably Michelin starred) restaurants. How times have changed.
This time I was looking for up and coming one Michelin star places rather than overly expensive established high end restaurants such as The Square where we'd been on our previous trip. We should be able to save some money too. Dabbous was high on the list as it had been the most talked about restaurant last year with some amazing reviews. Jay Rayner essentially said you'll never eat there as it was so difficult to get a table. I'll be the judge of that I thought. After all, I managed to get into El Bulli. How hard could it be? So usually at least a year behind the times, I managed to get us a lunch time booking several months in advance. The £59 taster menu seemed to be a good deal considering. 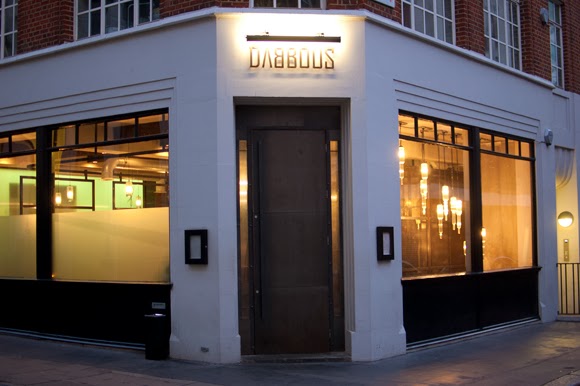 As you enter, it feels more like a trendy soho bar, overly industrial in design and rather harsher that I'd expected it to be. The tables were ridiculously close together but luckily we'd requested a corner position and were the last to be seated for lunch. 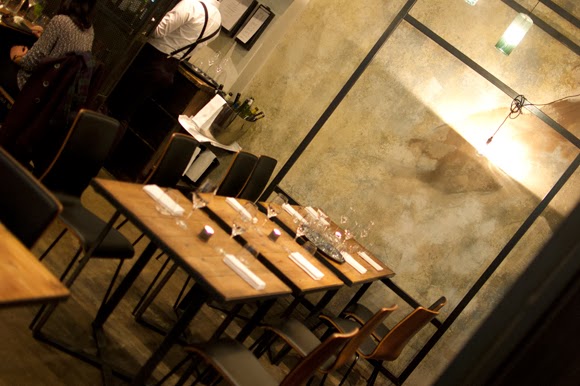 They brought us some fabulous olives and some truly wonderful bread in a bag, bread so good that I just couldn't stop eating it. (Some of the finest bread I've eaten all year). 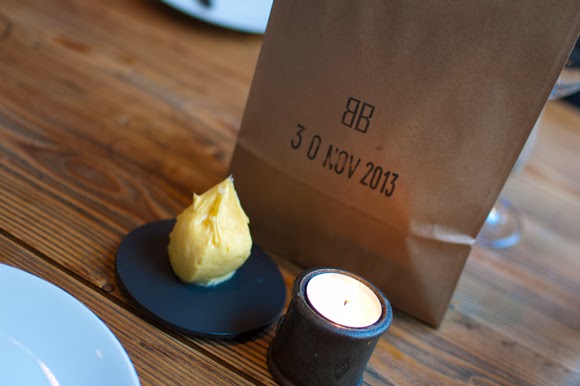 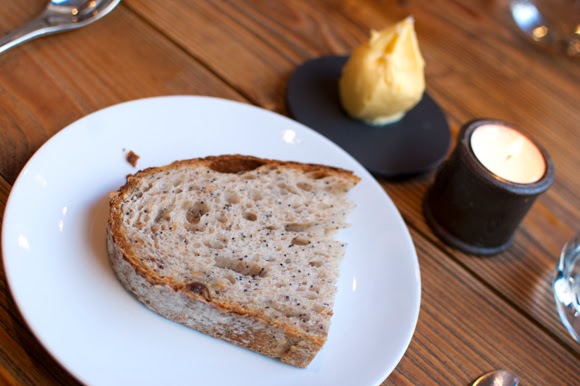 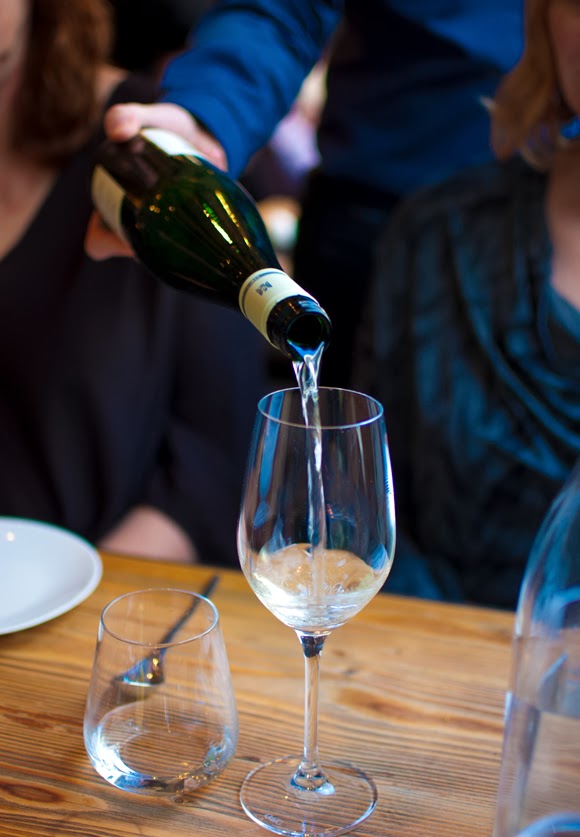 Then the taster menu as follows.
Muscat grapes with lovage & almond milk. Like a cold almond ajo blanco, simple, sweet and slightly salty, I'd file this under 'interesting' rather than stunning. 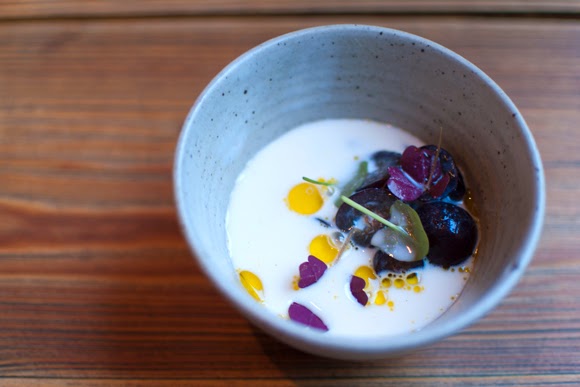 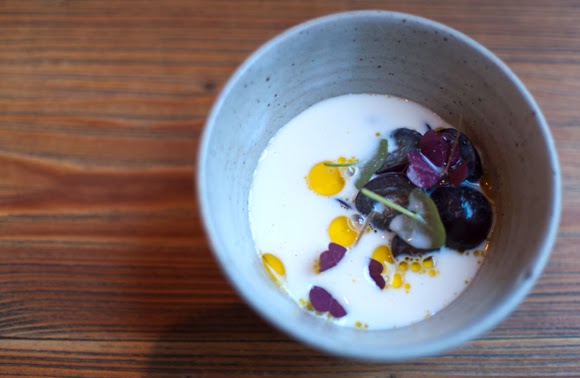 Lard on toast with black truffle. This was more like it, totally faultless for what it was. Perfectly crisp toast and sumptuously earthy truffle, it was perfect. It is however something you could imagine finding in a top quality Basque pintxos bar in San Sebastian. 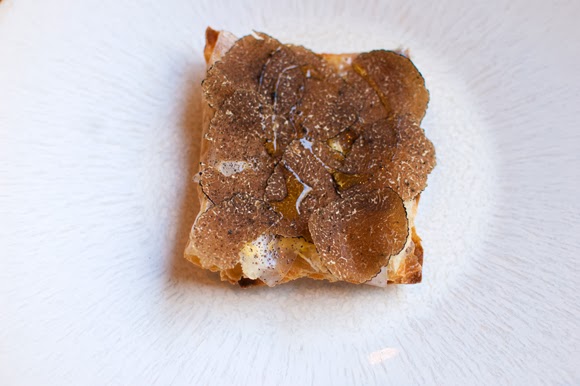 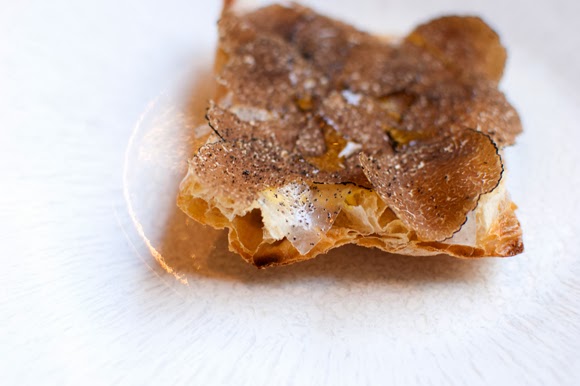 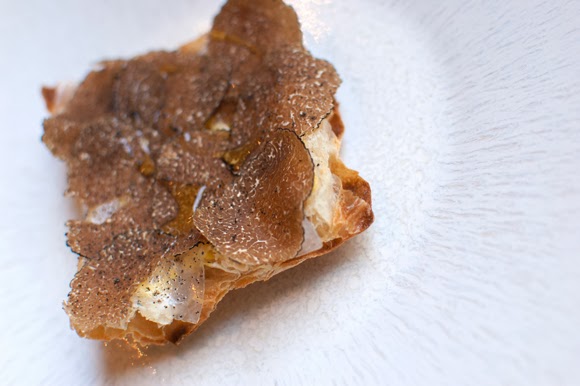 Coddled egg with mushrooms a smoked butter. I christened this 'woodland goo', it was gorgeous. 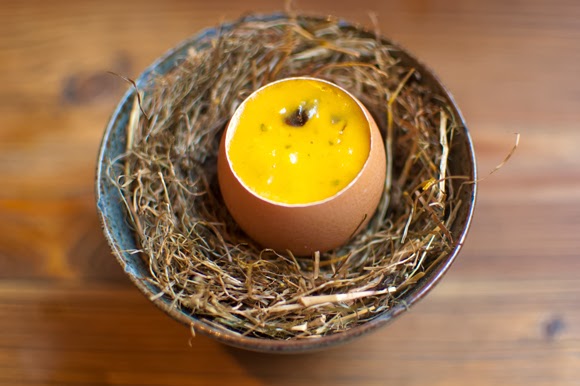 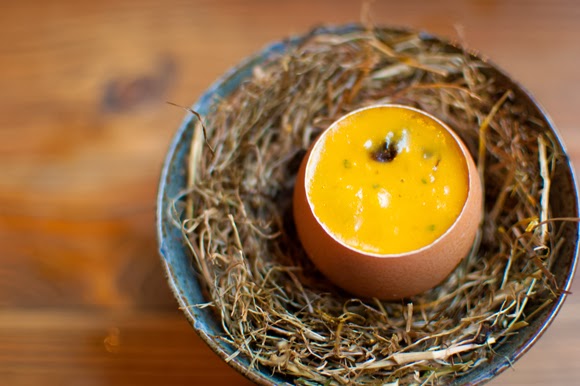 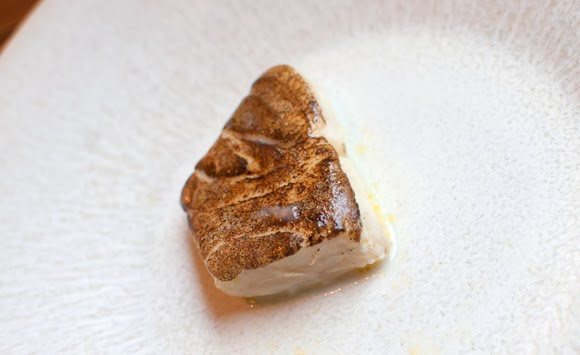 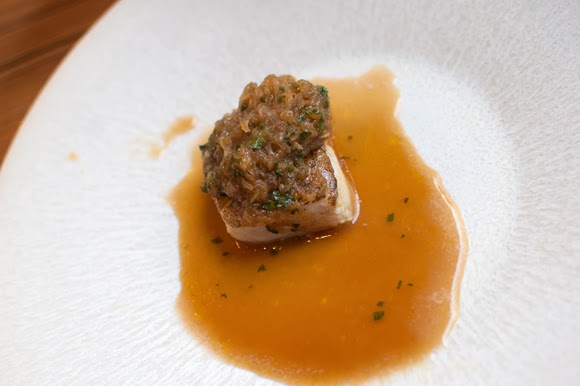 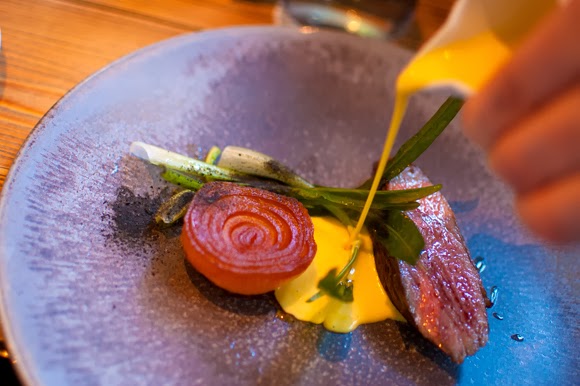 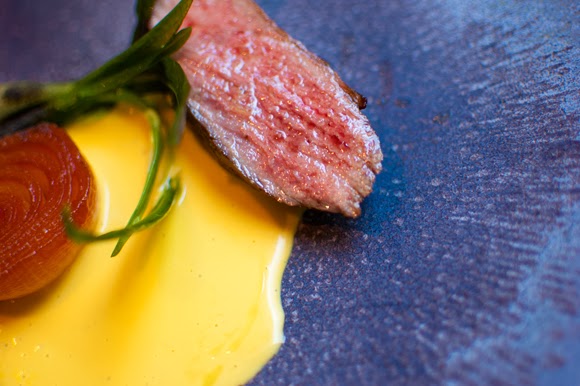 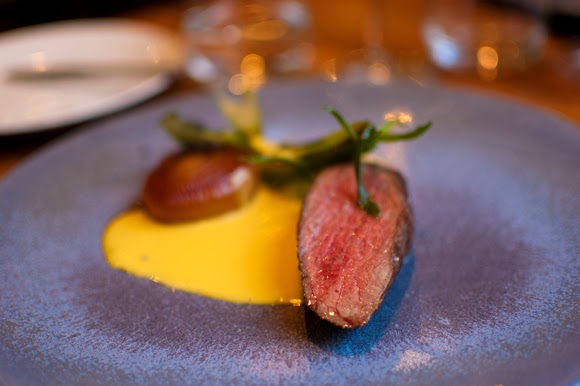 Artisanal cheese from the British Isles, baked apple and toasted fig bread (served as an optional cheese course; £9 supplement). This annoyed the hell out of me to be honest. They had recommended that we share two between four of us. For a start there was no choice and secondly the portions were the smallest I've ever seen on a cheese selection. They were the size that you'd cut to have cheese and pineapple on sticks! This was the most disappointing cheese course I can ever recall (although it did include the fabulous Mrs Kirkham's). 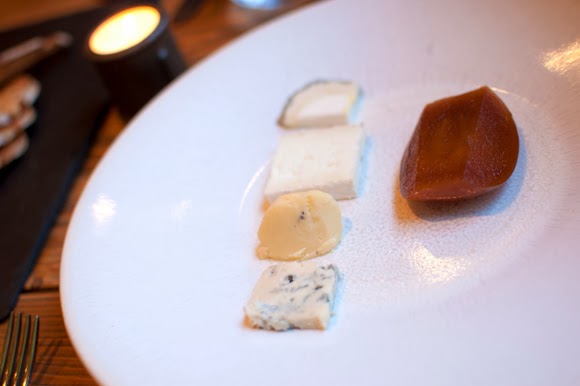 Pink grapefruit & jasmine with white radish. This did absolutely nothing for me this dish, a waste of a dessert course, there was nothing I liked about it unfortunately. 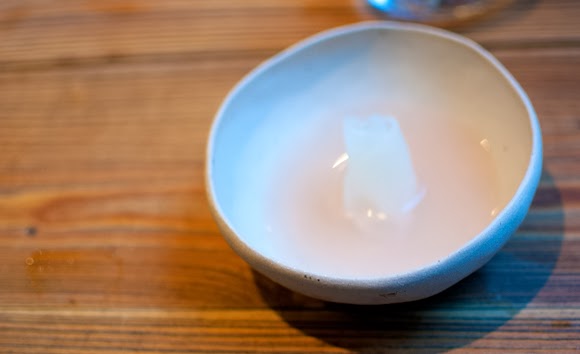 Chocolate & hazelnut ganache, basil moss, sheep's milk ice-cream. I enjoyed this a lot, interesting combinations too with the basil 'moss', it really worked. 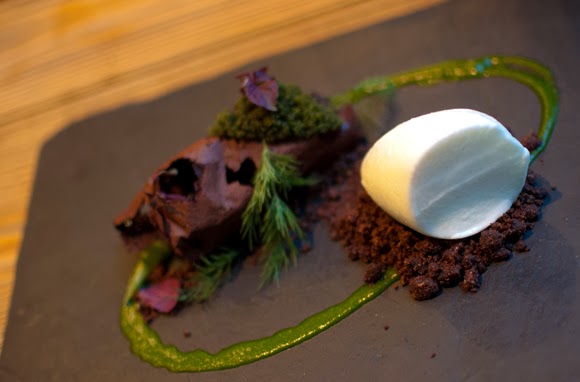 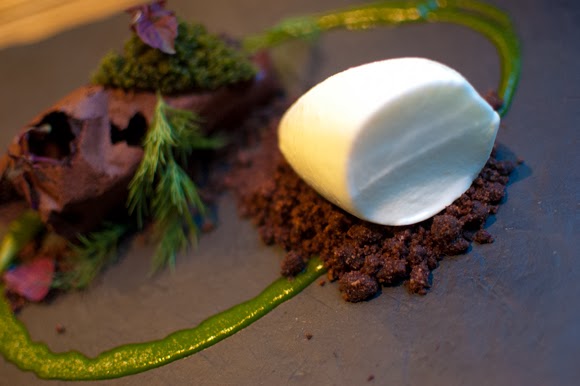 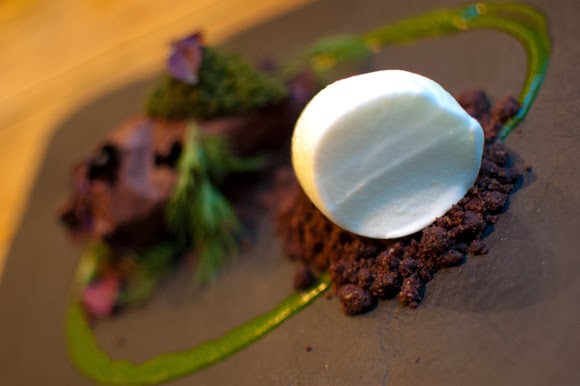 So in the end it was very much a mixed bag for all of us. It's hardly their fault that they've become overrated, but comparing it to several other one Michelin star restaurants* we've been to this year, (all in Spain), this was on the whole the least impressive with just a few too many weak courses and impersonal service. In hindsight my disappointment has grown because I feel like I believed the hype when I could have chosen somewhere better, especially as we only make it to the capital once or twice a year. The service was not engaging at all with very little warmth added to proceedings, it was mainly efficient although slightly slow. We left not exactly totally disappointed; there had been enough good stuff to make us happy but such high expectations sadly weren't completely met. Price: £59 for a taster menu still represents good value for money in London if you can get a table.
Atmosphere: I didn't much like the cold interior and it was cramped too.
Food: Patchy. Generally good but short of great.
Service: Cold, aloof and slow. Some friendliness wouldn't go amiss.
Star dish: Barbecued grain-fed beef.
Score: 7/10.

* 41 Degrees, Tickets, Aponiente, Casamar and Les Magnolies were all superior experiences for us. I'm not sure if this says anything about the level of Spanish restaurants comparing them to British ones or not.

Follow @Bacononthebeech
Posted by Bacon on the Beech at 08:06