People often say to me; 'you've got a great life - going out to eat all the time'. The truth is I set up this website out of sheer boredom. I'm a half successful freelance illustrator, so I started blogging about food and restaurant experiences to relieve the tiresomeness of day to day living and to give me something to do when I'm not working; about half of the time it seems. That was almost a year ago. I have to admit that I've had some amazing experiences since then, but at some cost. At times it is easy to get despondent to it - why am I doing it? For what purpose? It's such a strange pastime taking pictures of food before you eat it. I wouldn't claim to be a critic, or a writer, or an 'expert' in anything. Occasionally, I've wondered why I started it in the first place, but for the most part, it's a really enjoyable preoccupation. It's just natural I guess; some days you're up, others you're down. 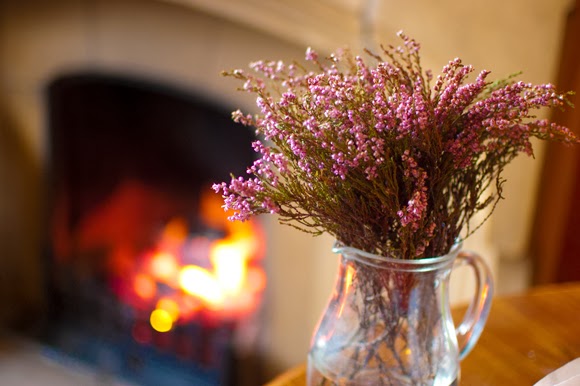 If you follow people on twitter you can appreciate that they go through the same thing, it's just life I suppose. Stosie Madi the chef from The Parkers has had her ups and downs recently. Thankfully for them, I went to eat there on Friday when they were on a big high. They'd just won a prestigious award - the overall Winner of the Taste Lancashire Award. This was a really big deal, and I was well chuffed for them. Very well deserved I say. I helped them celebrate in the only way I know how - eating Stosie's amazing food! 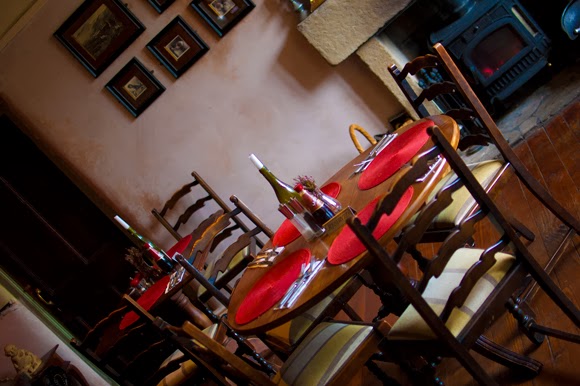 It took a bit longer than I remembered to get there from Manchester, but I was there by about 12.30. I sat next to the roaring fire and started on the feast (Funnily enough, my mood lifted immediately when eating). 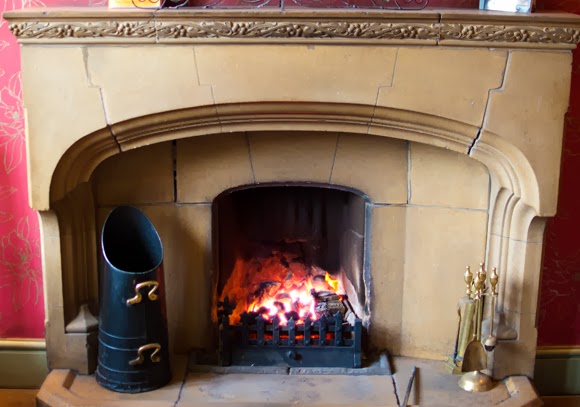 To start, two little amuse-bouches of Beef skirt and chilli, and a favourite from my previous visit; the Mushroom Parfait. There it was again, that memory of Umami from last time I was here. Both were completely wonderful. 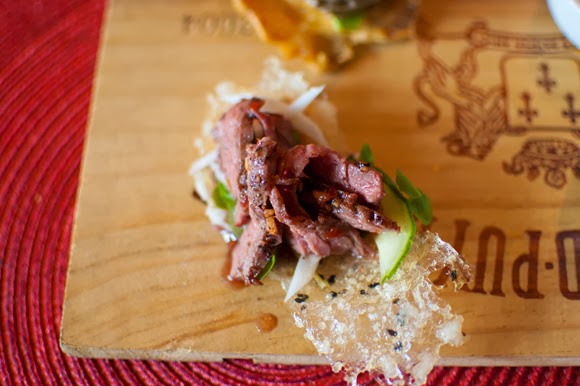 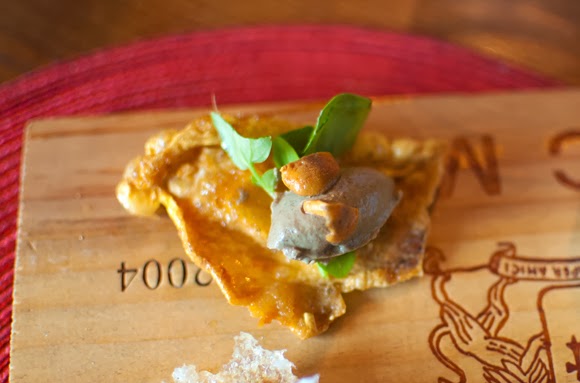 Marvellous home made pork crackling crackers too. I have to reiterate; this 'feeling' is a rarity outside of Michelin star restaurants, (and even in it), and you can't choose it, it's just involuntary, like a massive 'mmmmm' sound in your inner monologue. At least I try not to make that noise on my own anyway. It might have alarmed the sweet old couple dining silently behind me.
Then came another unordered treat; Home cured Bowland Ox Tongue & garlic butter and damson. Soft, sumptuous and simply stunning. 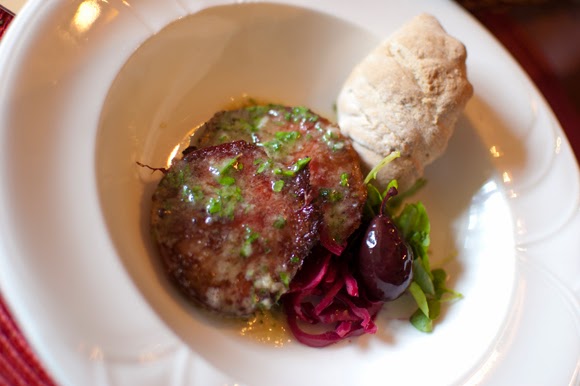 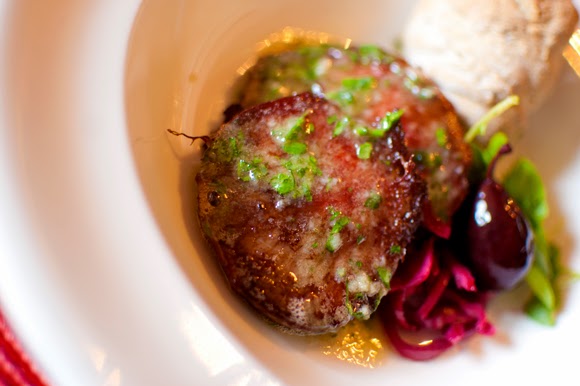 To follow the Crab Parfait. Like the Mushroom Parfait, I don't know how she makes it so creamy and smooth, the texture and flavour are like no other I've tried. It's the very essence of crab. 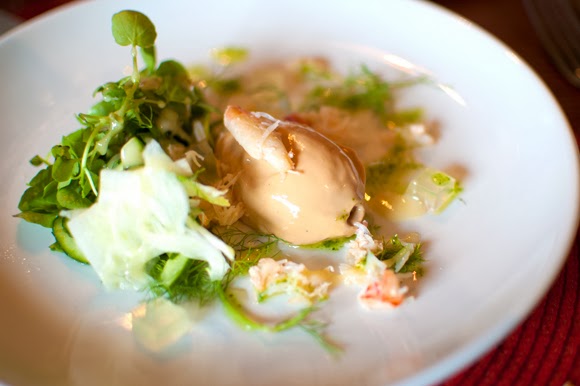 For mains I had the Venison Pasta, earthy, rich and comforting. I tried to save Mrs Bacon some of this but I couldn't stop, and left her the tiniest portion ever. Still, it's the thought that counts eh? I liked this dish, but didn't love it quite as much as the smaller starters. But that's the way I like to eat - trying lots of smaller tapas size dishes in big variety. Also, I really fancied the cheese tart but thought that would be an unadventurous choice. Knowing Stosie's cooking, it would have been fabulous. 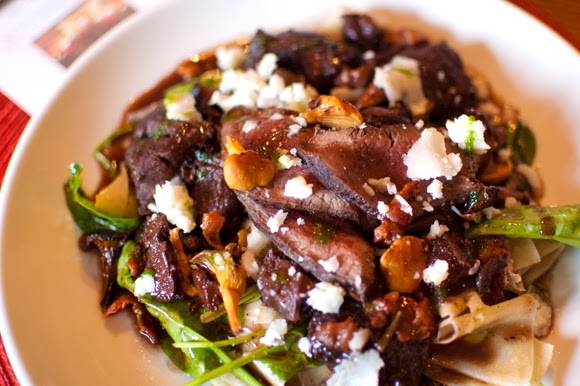 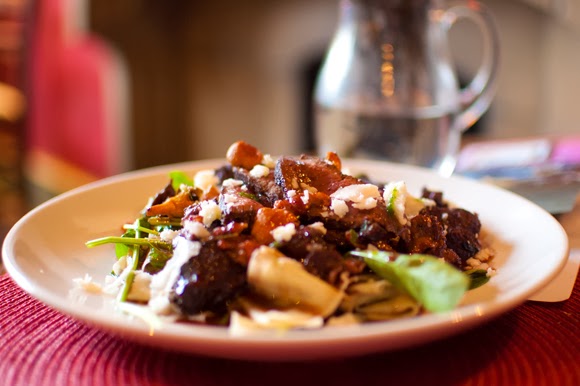 Speaking with Stosie later I asked her why didn't she do a taster menu? She'd thought of it already and is hoping to introduce a gold card system where regular food tourists and fans of her cooking pay a nominal fee (£25?) and can come in and get a taster menu of whatever's good in season - and how much they want to pay. So for instance, if you have a budget of £25 per head to spend you just get that amount of food brought out, the more you spend the more you get obviously. Sounds ideal to me. The majority of their local traditional clientèle are not likely to choose this option - they just come in for two or three courses - but for food obsessives like me (and hopefully you reading this), it's absolutely perfect. I love the smaller plates/tapas part of the meal most of all, as I did last time. I finished off with a gorgeously exquisite chocolate fondant. 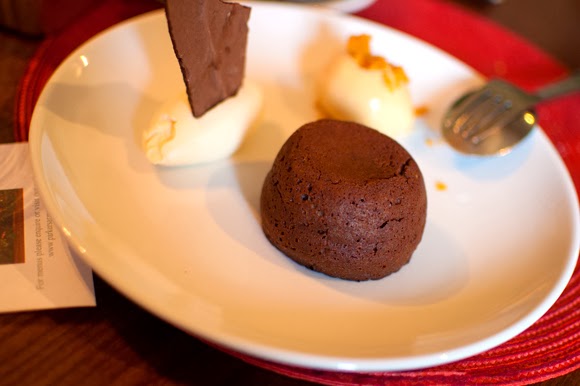 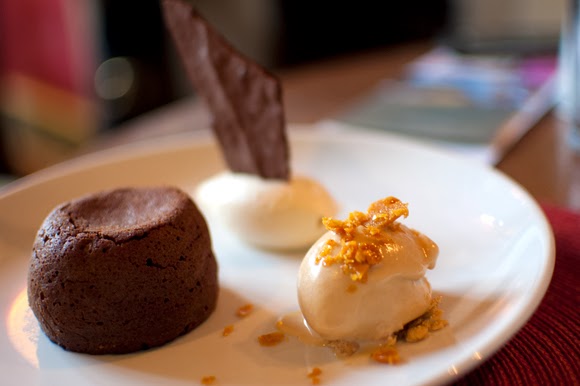 Chatting over a coffee with Stosie, AJ (and Kathy), I could have listened to them talk about the industry and restaurants for hours. One good thing I took from it personally was that a few people have gone to The Parkers after reading my earlier review. If this website has not achieved anything else, to help spread the word about her magical cooking is an achievement of sorts I guess. So if you want an escape from the sheer mundanity of life and you love food as much as I do, a trip out to The Parkers Arms is just the ticket, it certainly lifted my spirits anyway. 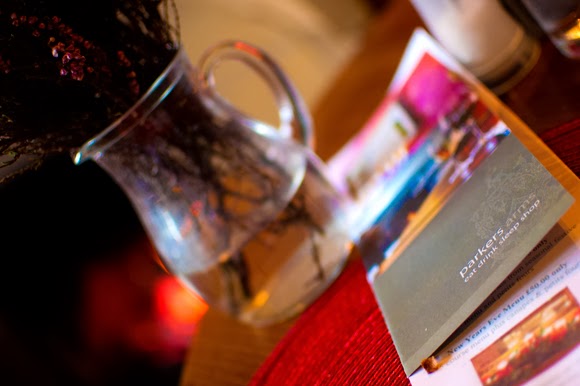 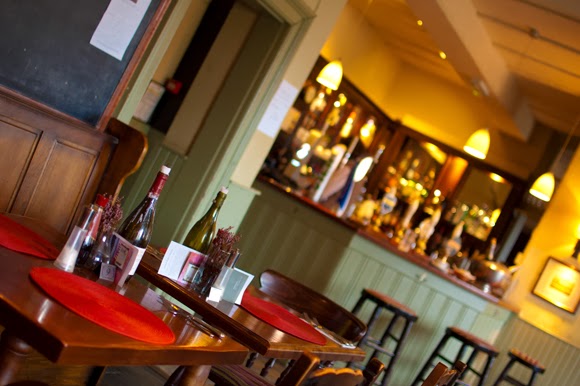 Follow @Bacononthebeech
Posted by Bacon on the Beech at 09:05