It's easy to get stuck in a routine, going to drink and eat in the same old safe places. So us and a couple of friends decided we were going to take a tram from Chorlton to somewhere different for a change for a curry and a few drinks. I suggested Mort Subite in Altrincham and Dilli where we'd been several years ago and enjoyed it. They agreed. Then I consulted twitter and loads of other great suggestions were made, but we'd all set our heart on the Belgian bar. However, the more recent reviews for Dilli were not so favourable with the general view being that it'd 'gone downhill' and it was overly expensive. (It was empty when we walked past on Saturday night which speaks for itself). We went to Altrincham anyway, armed with a list of local curry houses in Hale up the road hoping to 'wing it'.

You can see my earlier post on Mort Subite here. We all loved this dark authentic Belgian cellar bar but after a few very strong beers perhaps all our judgements were clouded on where we were going to eat. We settled on Mhariam a little local Indian restaurant in Timperley we'd been tipped off was good and authentic. It's only a tram stop down the line too and we all wanted to go and visit the new Frank Sidebottom statue nearby. (We were lucky enough to see him perform at Timperley Conservative club only a few years before he died).
It's a bit of a walk from the station and my stomach was demanding immediate gratification. After a quick obligatory photo shoot (arms around the statue etc), we found our recommended restaurant. 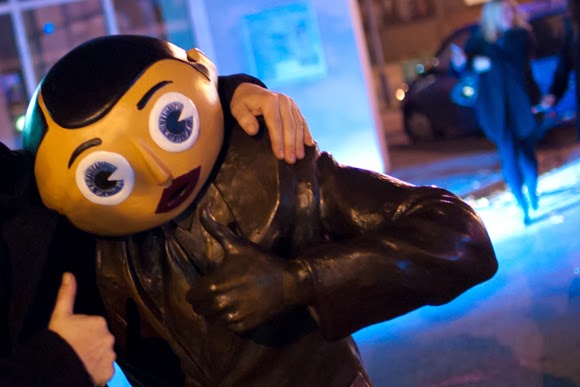 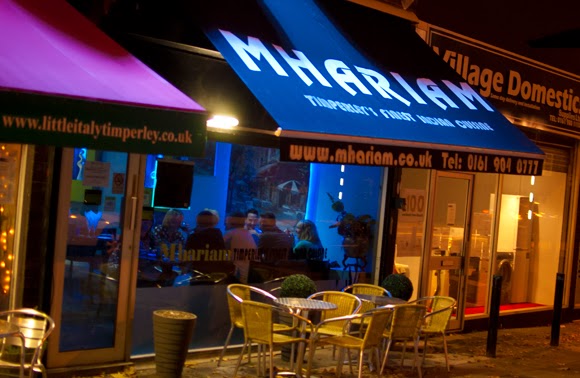 First impressions weren't great to be honest, it's not like a proper restaurant at all but more like a glorified take-away in Rusholme but full of drunken white folk (us included). This is obviously not a good thing. The open kitchen was also a mess; bottles of bleach on clear show etc. But it was a BYO which lowers the cost quite a bit so we stocked up at Bargain Booze next door. How bad could it be? 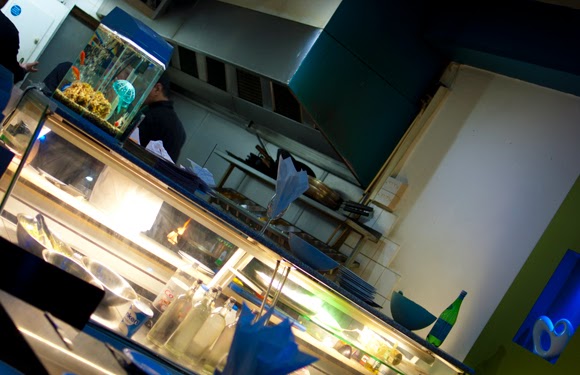 Firstly the service was appallingly poor. Imagine getting any random teenage lads off the tram and having them wait on tables, with no training; it was like that. No friendliness, no charm, no pretence of customer 'service' or warmth. However sometimes the food can be great at places like this. Unfortunately it wasn't.
Strangely though the poppadoms were pretty good, freshly made, warm and crisp, the dips were merely adequate. Starters weren't too bad, the seekh kebab fairly standard, but the lamb chops were underdone and fleshy, which is unusual as they're normally over done. 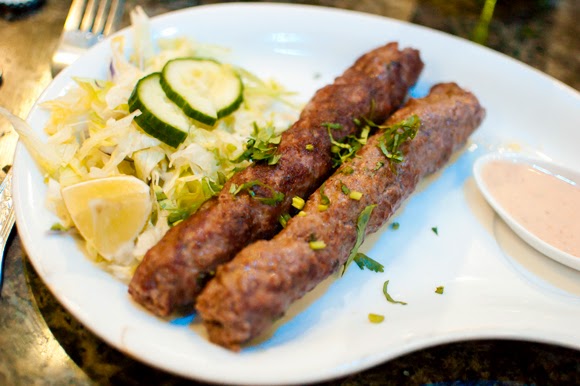 The mains though were a very poor show. Out of four dishes, only Mrs B's Rasthani was any good and close to what you might call 'authentic'. The others were all massively over coloured, over flavoured with too much salt and over sweetened in the case of my Makhani. This was truly dreadful, more like a supermarket korma (the curry for people who don't like curries), sickly sweet (even though I'd asked for it madras hot) and bright yellow - it's the worst curry I've eaten in many years. It's like they tweaked every dish to appeal to the lowest common denominator, and the mainly white local crowd with sugar, colouring and salt. This food was like bad dodgy curries of old before they moved with the times.


I have to be honest though we were all having a great time despite the food being mainly awful, obviously we were pissed, but sometimes these sort of nights are really enjoyable precisely because they're so bad. One of the lads asked us how it was - "that was terrible" I said - "is that why you ate it all?" he quipped. (No apology obviously).

Yes he did have a point there though, I almost sent it back at the beginning, but I just couldn't be arsed and I was so hungry that I would have eaten a scabby horse which would have been preferable. Mrs Bacon had a giggling fit at this point, it was just so bad in every way, the only thing to do was to laugh. We paid up and staggered out to a local pub, where our night would get even more surreal.
This was empty but for a few local 'characters' singing karaoke. One was the spit of Alex Higgins (a few years before he died) and Mark E Smith, but was wearing grey slacks and a cricket jumper draped over his shoulders. I'm well used to places like this from my youth, I am from Stoke after all. But it's been a while.
I was hoping this was all a bad dream and I'd be safely in M21 where we have an array of fantastic bars and a few decent Indian restaurants. Yet here we were in the land that time forgot on a Saturday night. We went with it though and ended up having a right old laugh. My mate got up to do Tom Jones on the karaoke. Deciding it couldn't get any better (or worse) we left (Tom Jones has left the building), for the very long walk back to the tram-stop and eventually the safety of home.
It was genuinely one of the funniest nights we've had in ages and one which I won't forget in a hurry. The curry was totally abysmal though, easily the worst meal of the year with the worst service too.
I told you we should have gone to Mughli!

Price: I have no idea. Not overly expensive I guess.
Service: Awful and amateurish.
Atmosphere: Untidy cafe, horrible lighting and scruffy decor.
Food: Worst curry I've had out in some time.
Star dish: The Rasthani wasn't too bad.
Score: 1/10.

Follow @Bacononthebeech
Posted by Bacon on the Beech at 16:25