Mughli - A lesson in how to run a successful restaurant.

I know absolutely nothing about running a restaurant successful or not, but as a punter and as someone who eats out a lot, I've become increasingly interested in what makes a popular restaurant work. Clearly it's not that easy or everyone would be doing it. It's said that in America 60% of new restaurants fail, and the reasons would be numerous. I'd imagine it to be a similar figure in the UK too. Location is clearly a large part. A new restaurant in Manchester opened several months ago and many bloggers went and loved it, us slightly less so. I thought then that they may have problems, it couldn't be seen from the street and was at the wrong (quiet) end of a very long road. The head chef recently left and has joined a new highly anticipated restaurant. Sadly I can't see his old place surviving in the long term. 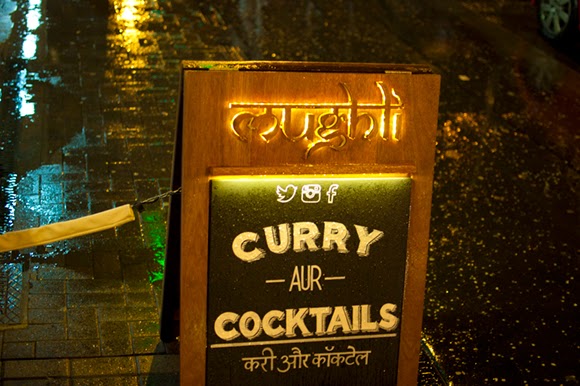 Cost and value for money is also another important factor especially in Manchester. When I reviewed Byron Burgers, loads of people said they wouldn't pay 'those sort of prices' for a burger, something that I doubt comes up in London as much. I've found some people have an unmovable budget and won't budge from that. Fair enough I guess. Many other factors are involved clearly, but here's a few that come up time and time again for me.
Service, Food (obviously), Interior and Atmosphere and an increasingly important one; the use of Social Media as a vital promotional tool.
So here I've compared 3 restaurants I've been to recently, all of which seem to be popular and have a good location. These are only my own opinions/experiences, but they make for interesting comparisons I think. 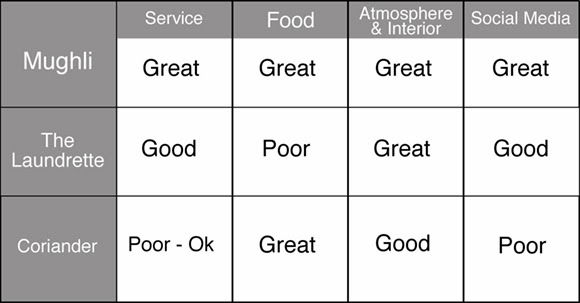 Firstly The Laundrette in Chorlton, they got everything right except for the food. The interior and atmosphere is spot on, they tweet and promote regularly. I go past here often and it's nearly always busy. So they seem to be able to get away with average food, or maybe that's just my opinion and everyone else is happy with it? I think more likely that it's one of those 'lifestyle' places that people seem to enjoy (especially in Chorlton), and the food is slightly less relevant than the vibe. It's still building your house on sand though don't you think? Surely you'd want to try and close any weakness down in your business? I would. I'd be phoning up local pizza specialists like Honest Crust as Kosmonaut have done and find out how to make really great pizzas instead of just average ones.
Coriander also in Chorlton is another favourite of ours. They have two weaknesses for me. Firstly their service is often slow, although this improved on our last visit. But more importantly they don't use social media despite having a twitter account. We love the food and I've reviewed it positively twice as I have Mughli. So guess which one is on it with the re-tweets? It's free promotion for them after all, so Coriander are missing a huge trick in ignoring how you can use Twitter and Facebook to constantly promote yourself on line. This is how it works now. 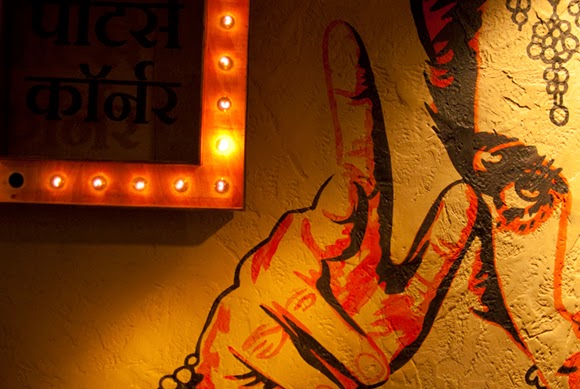 So onto Mughli - they get full marks in all categories for me. They have bloggers and the press constantly giving them glowing reviews, they have the PM David Cameron as well as celebrities eating there. But it's not all show, they back it up with fantastic food, a great atmosphere, snappy service and are always looking at how to update and improve. Street Food is a huge trend at the moment so Mughli are on top of it naturally. Also rather like Solita, it's imperative to have a strong manager. Haz for my money is one of the most impressive restaurateurs in Manchester.
These are some reasons why I think that they're one of the most successful of the lot.
We returned on Sunday and tried some stuff off the brand new menu. (How many other Indian restaurants create new menus like this?)
For starters we had the Halloumi Meander (£4) and the Tamarind Masala Fish (£4.50) both perfectly pleasant, plus the Pani Puri (£4.50). 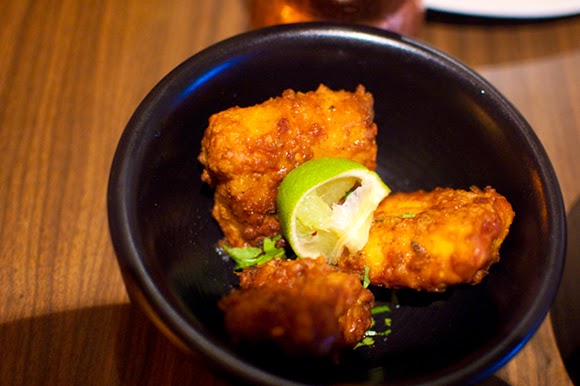 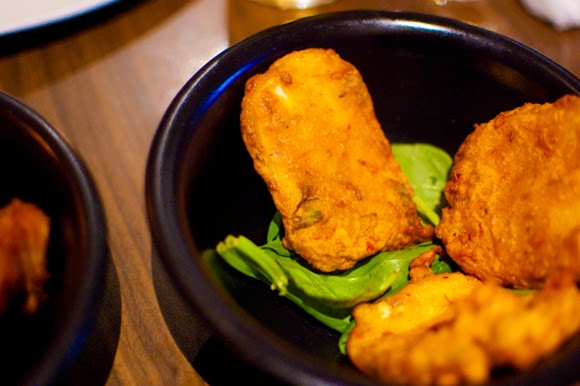 After tweeting a photo of this a few people in the know said it wasn't a Pani Puri at all, well whatever it was it was well tasty! I'm no expert, as I've only had this dish once before, and think the first one I tried at The Hungry Gecko just edged this one, it may need tweaking. 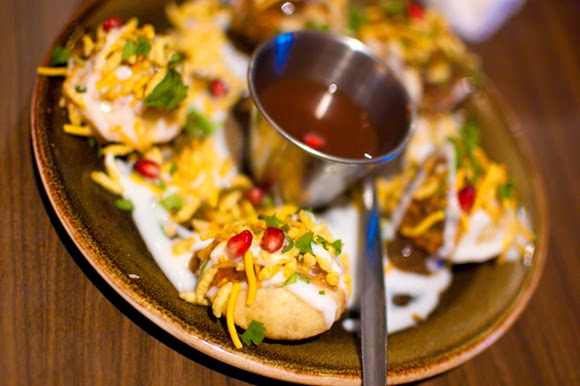 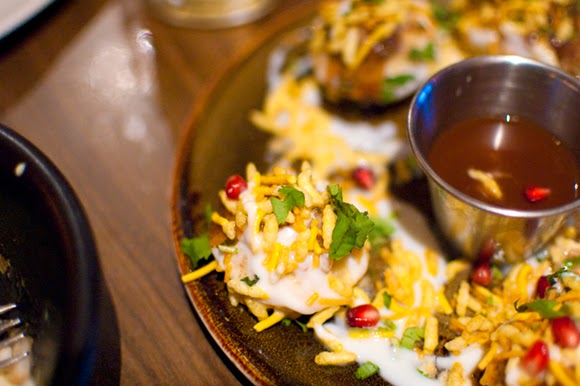 We also all shared the Gunpowder Chips (£3.50). These sweet potato and chilli fries have gained a lot fans lately, I thought they were pretty good too. I enjoyed all the starters but have to say none of them for me are as good as those amazing Lamb Chops I regretted not re-ordering on this occasion. 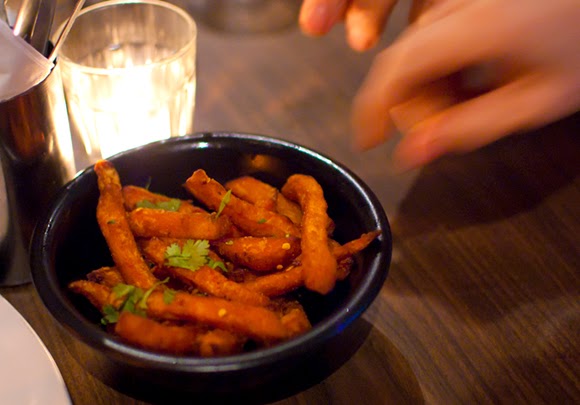 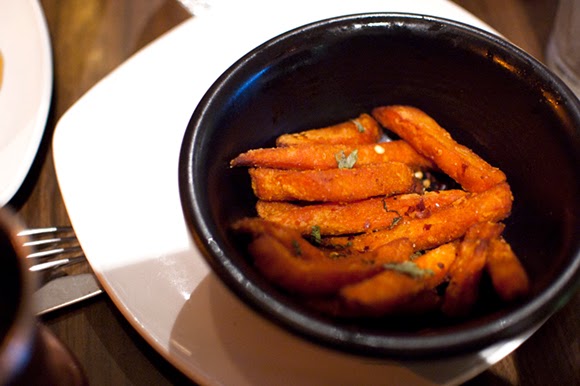 The mains though were some of the best dishes I eaten at Mughli. The Staff Handi (£8.50) is a real stunner. Lamb cooked on the bone as it should be, and stewed for hours, it's got that amazing silky rich texture I just can't get enough of. 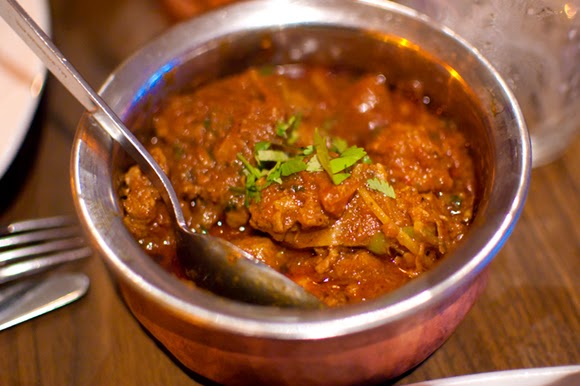 I was going to go for the Railway Curry but was persuaded against it as it's similar to the Staff Handi. I'm so glad I went for the Butter Chicken again (£9). Much spicier than most, it's still got that creaminess as well as the heat, so many inferior Indian restaurants cannot achieve for some reason. 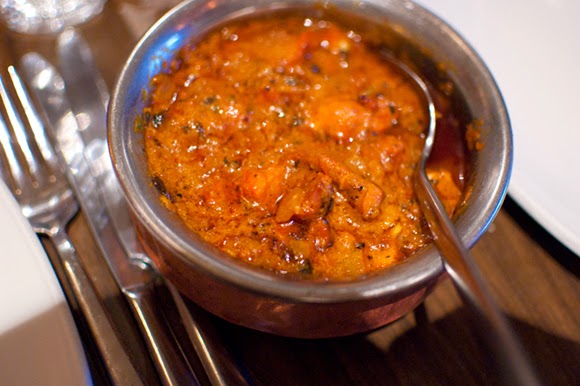 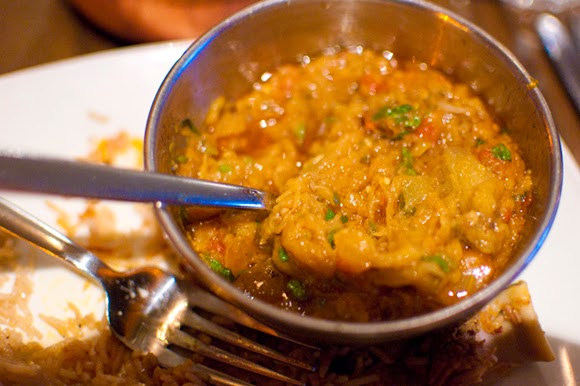 We have to order the creamy Aubergine Mash every time (£4) Amazing! And always Peter's Garlic and Chilli Bread (£3.50). The only criticism I can think of Mughli is that it's always a more expensive affair than most other Indian restaurants, but maybe that's because we always order loads more as there's always something new to try!
If I was opening a restaurant myself I'd be looking at Mughli as a textbook example of how to run a successful operation that's for sure and this is why we'll always be back for more.
Earlier reviews of Mughli here and here. 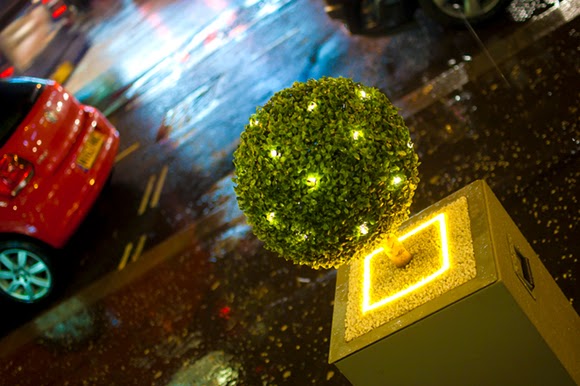 Follow @Bacononthebeech
Posted by Bacon on the Beech at 16:37