What can you do to brighten up a very dull grey Monday, when it all seems a bit grim and depresssing? Going out to eat is always a winning solution for us, and luckily we'd been invited to try the new celebrity fronted restaurant James Martin at Manchester235. We went to the previous incarnation, Linen not so long ago and liked it, but it makes good financial sense to re-brand if the restaurant isn't doing as well as it could. People like celebrity brands they feel they can trust and James Martin seems like a trustworthy decent bloke who always comes across well on TV I think. I can't see him ever getting caught nicking cheese from Tesco's like his predecessor on Saturday Kitchen can you? 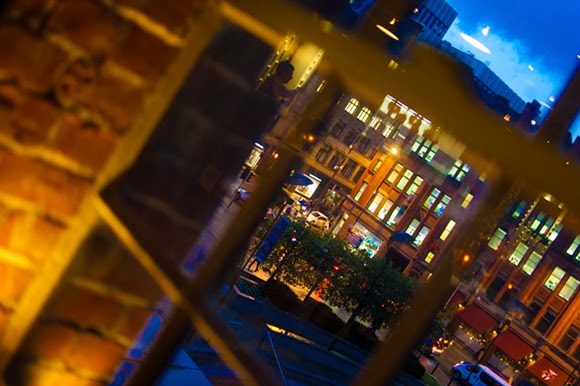 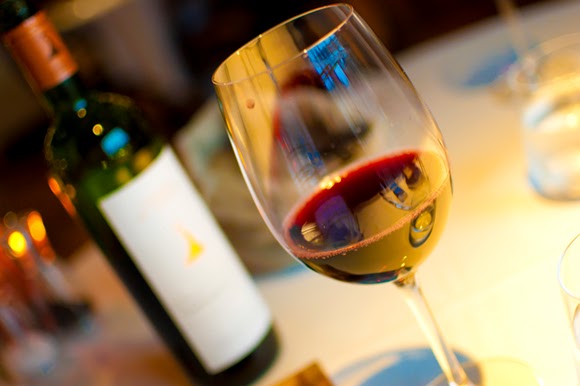 The great thing about The Great Northern Warehouse is if you park in there you never need to leave the building out into the rain as it was awful on Monday night. The only trouble was, approaching from the car park it's like a concrete maze in there. We eventually found it and made our way to the restaurant - the MASSIVE pictures of James Martin helped too. As I said in my Linen review, Mrs Bacon and me are not gamblers at all, we don't even play the lottery as we'd hate to lose the quid, but I guess some people would think we're mad for spending so much money on food.
The interior was already pretty plush and only needed minor updating. What had changed from last time was that already there were more people in, and it was still early Monday evening, a quiet day normally. So it seems like it has paid off to get a celeb chef in. (Although he won't be actually in the kitchen for the majority of the time - the head chef is actually Douglas Crampton formerly of highly rated Anthony's in Leeds and James Martin's Leeds Kitchen.) 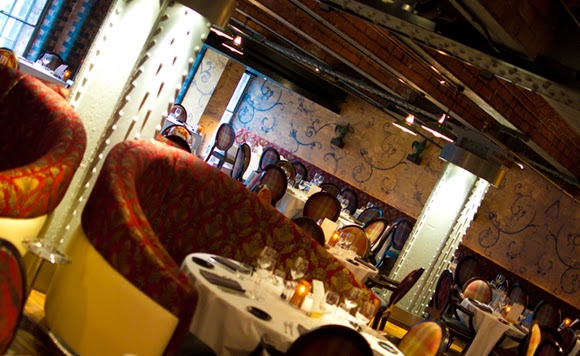 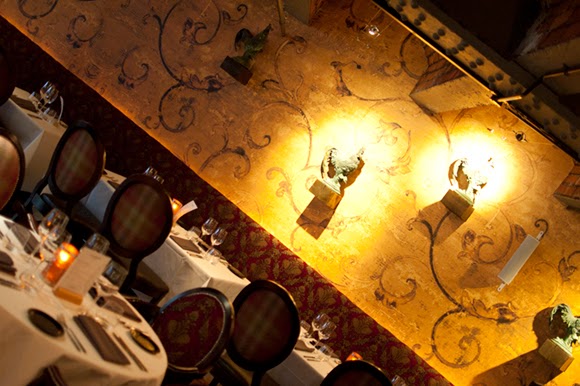 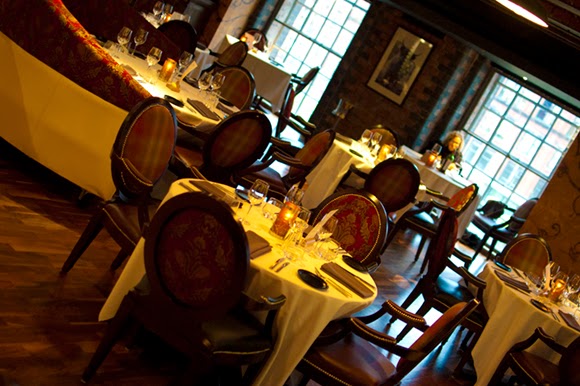 First we had some bread, this was pretty good rather than excellent we thought. Nice presentation in the hessian sack though. 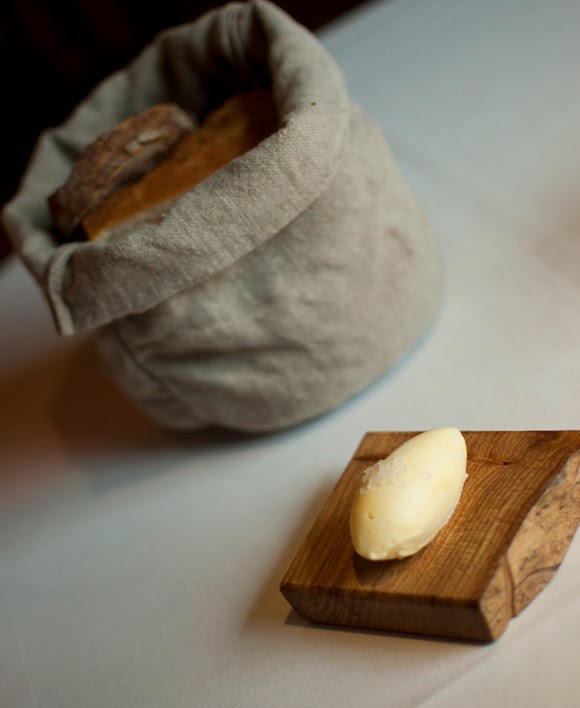 Thai Crab risotto, Lemon Grass, kaffir lime, and chilli. (£7.95 starter portion). Absolutely divine, a completely stunning dish. The liquid stock, flavour and texture were perfectly done. The best risotto we've had since we were in Italy several years ago. It's one of those simple dishes, when done properly, that can be really sublime, and this truly was. 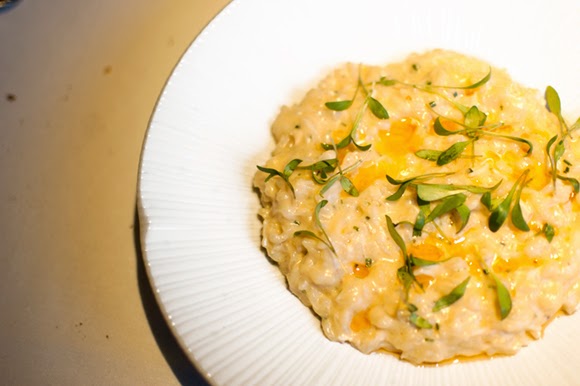 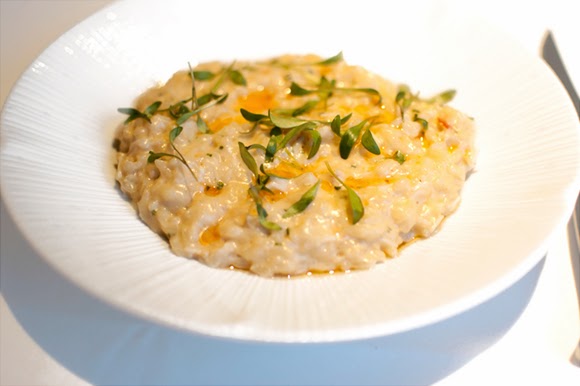 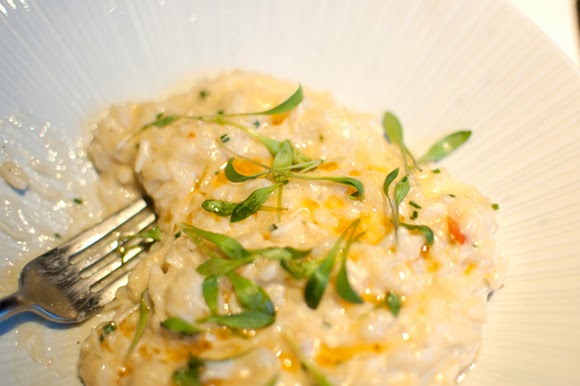 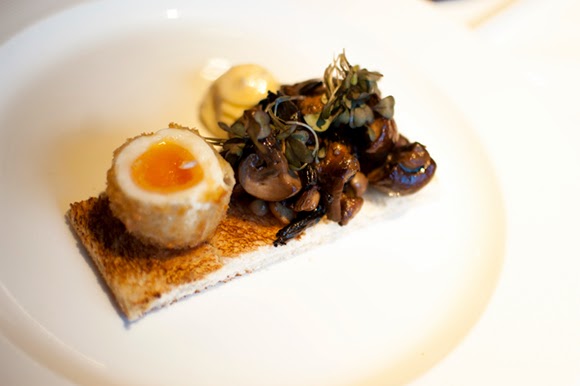 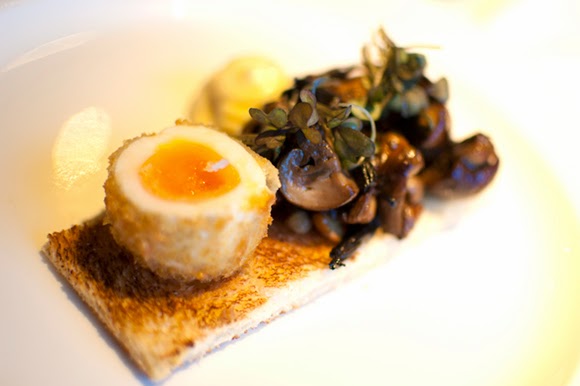 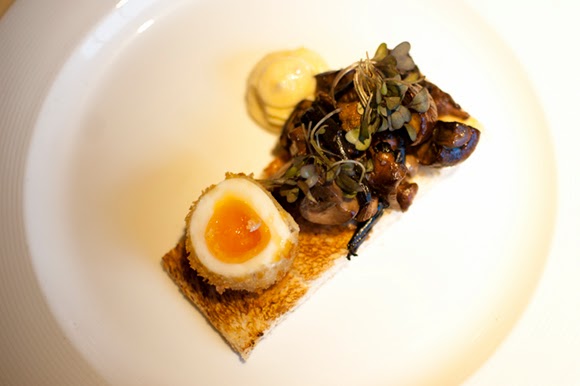 Duck Liver Parfait orange chutney and toasted sourdough. (£7.50). Our least favourite of the starters, it was good but needed tweaking slightly we thought. The texture was lovely; light and fluffy, but the flavour was not a patch on Chef Stosie Madie's Parfait. (If you've eaten it you'll know what I mean although that is mushroom to be fair.) 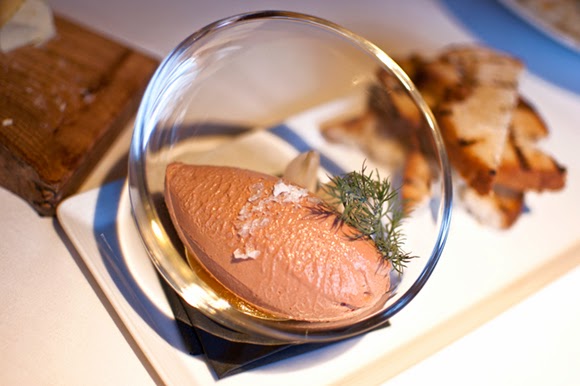 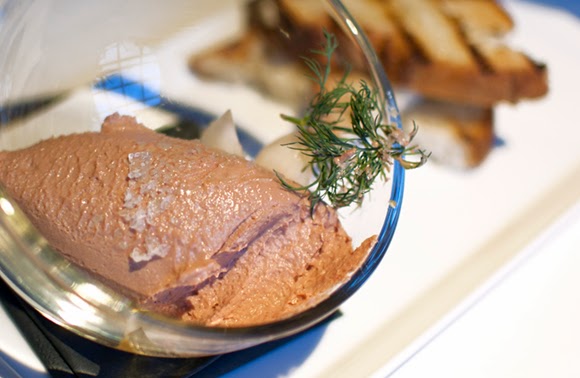 8oz British Wagyu (£49.) Yes you do read it right. Just under fifty quid. For that price, had I been paying I'd have expected it to be the best steak I've ever eaten. It wasn't. It was a good steak, no it was a very good steak, but for me simply not worth the hefty price tag - double what you'd normally expect to pay. Is Wagyu like religion - do you have to believe in it? Cause I've not 'got it' yet. I'm also thinking that now I need to order my steaks blue as this wasn't rare enough for me either. The bone marrow and black truffle gravy is probably the best gravy I've ever had though. Chips were fine rather than fabulous. 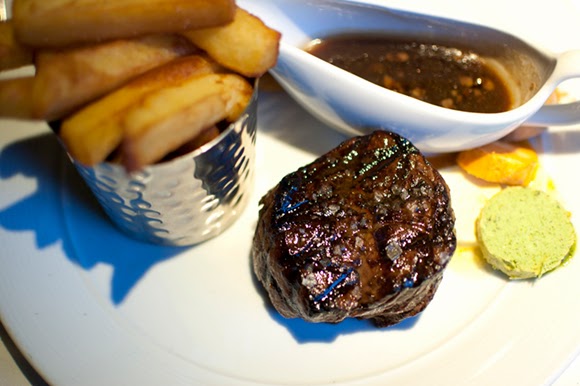 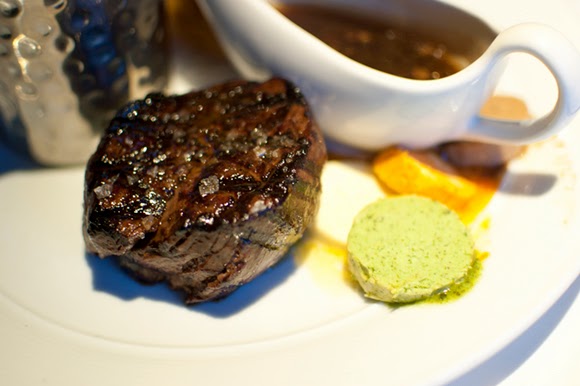 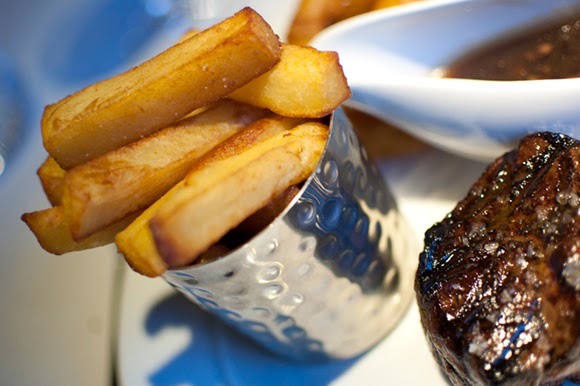 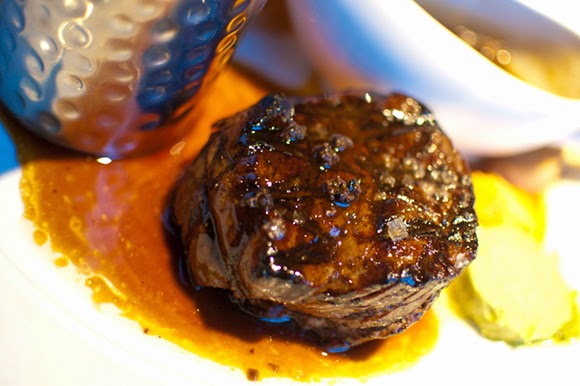 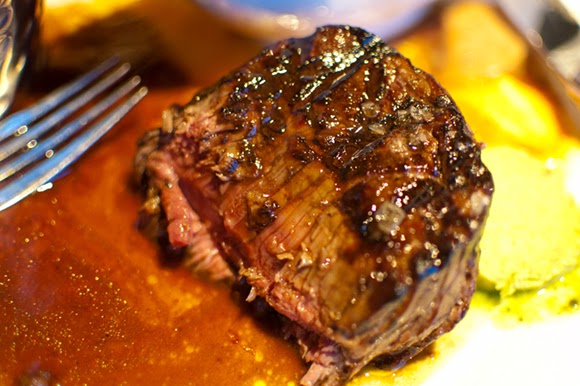 Slow roast belly of Redhill Pork, braised cheek, pickled baby apple and cider sauce. (£16.50). Again, a good dish if not stunning, the crackling was lovely and the braised cheek was moist, but the other meat was a little dry and not juicy enough. To be honest when you've eaten pork at Azurmendi, you may as well give up ever eating it again. It's probably an unfair comparison though, this is a solid dish if only slightly over done. 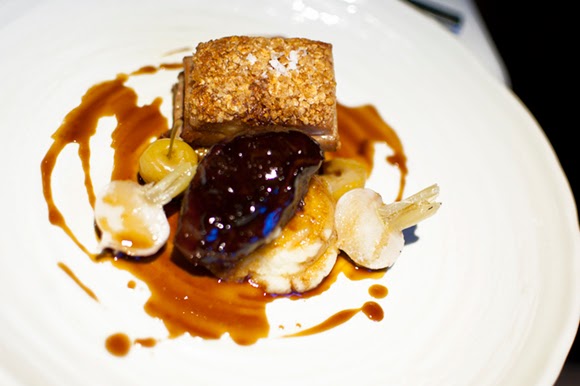 All the puddings were good and priced at £7 each. Mrs Bacon our resident sticky toffee pudding expert rated the one here very highly indeed. It was lovely, warm and comforting. 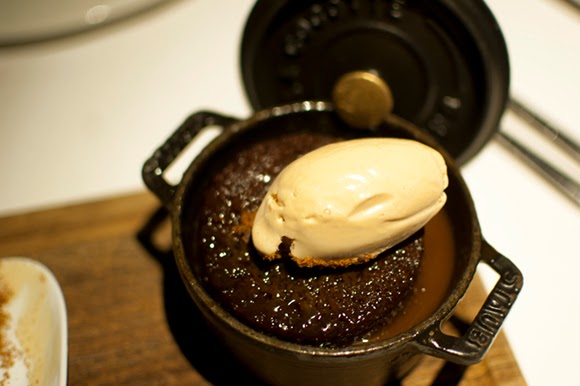 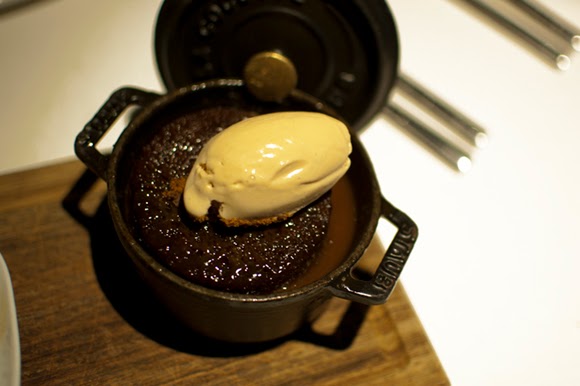 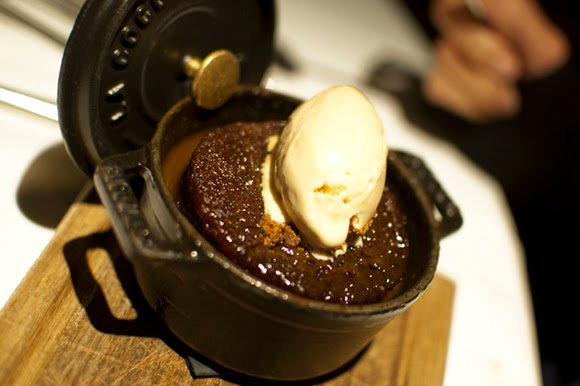 The white chocolate and whisky crosissant butter pudding was another real winner. Superb! The vanilla panna cotta was also enjoyable. 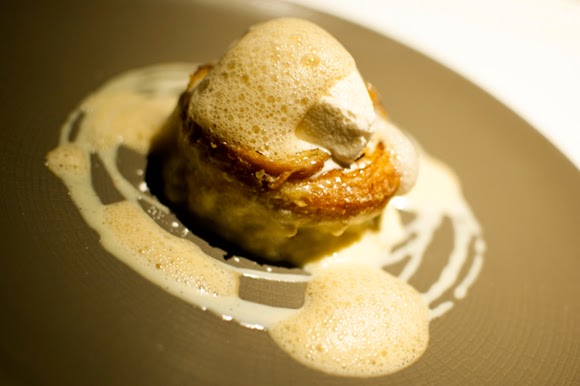 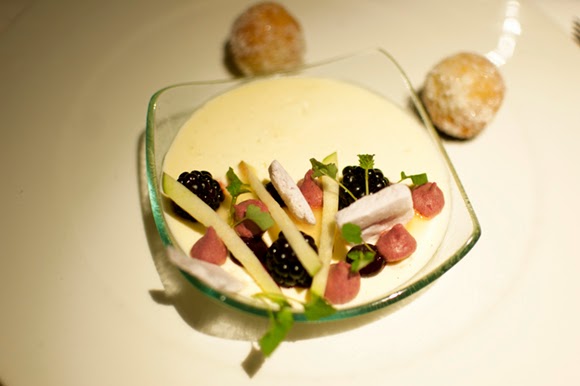 We had a lovely evening at James Martin Manchester235, the food was good, although as I've mentioned after some amazing meals this year, it takes quite a lot to blow us away these days. On the whole, it's a decent solid performance rather than a 'wow' meal for us (apart from the risotto).
James Martin Manchester235 though I think is better for it, unlike some recent openings, it's not searching for stars and failing, it's after that middle market, and for me it's pitched absolutely perfectly. The food is honest, decent, modern British food, dependable and good quality for what it is. Nothing to scare the horses as it were. You could take your parents there - if they were paying that is.
Consequently, I think this restaurant will prove to be a huge success in Manchester.
So, I managed to go through the whole review without making a gambling pun. What were the odds on that? 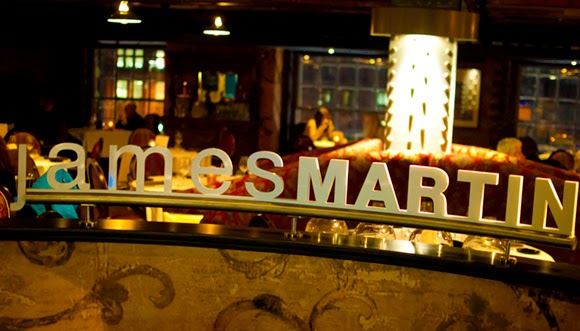 * We didn't pay for this review, but as you can see it made no difference to my hopefully constructive criticism and opinions above.

Follow @Bacononthebeech
Posted by Bacon on the Beech at 16:27