It's only been open for about six weeks, but I've seen nothing but good reviews for the Rosylee Tearooms. We went on Saturday for an early lunch. The sun was out on Stevenson Square and even Manchester was looking at its best for a change. It didn't even really feel like England, more like a European city Square, well almost. We sat outside, next to a large table of friendly and high spirited Dutch Manchester United fans, which added to the unreal nature of it. The sun was really shining on us, and everyone was in fine spirits. I didn't even mind when our neighbours started playing Michael Bolton on a little stereo. 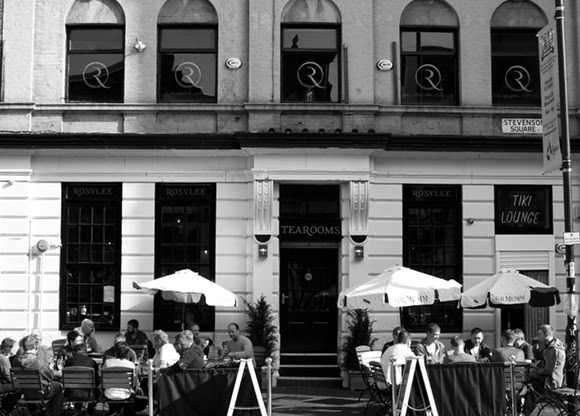 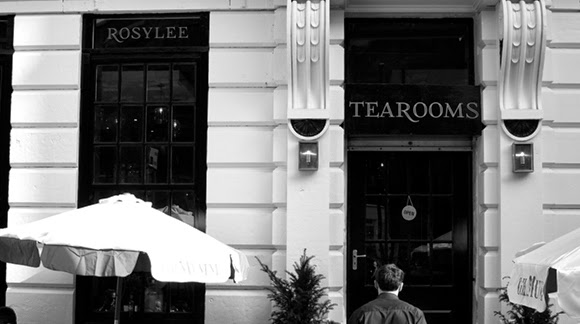 I had a look inside, they've done a great job, it's totally different from everywhere else round these parts, it feels a bit Parisian, with the tiles, and plants hanging down from the ceiling. Sometimes all it takes is a little imagination and some creativity to design the right ambience. The staff were all really lovely as well and dressed elegantly. I had a good feeling about this place even before we ate. 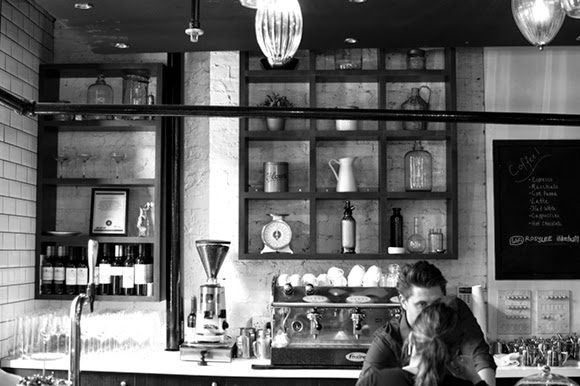 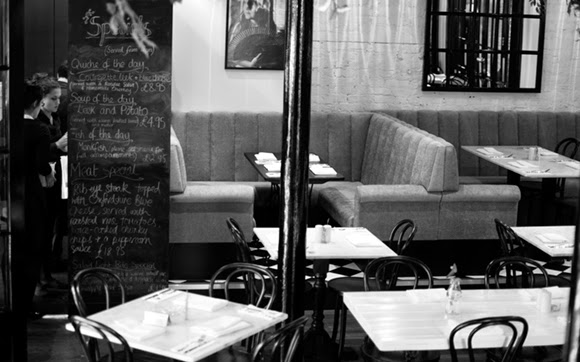 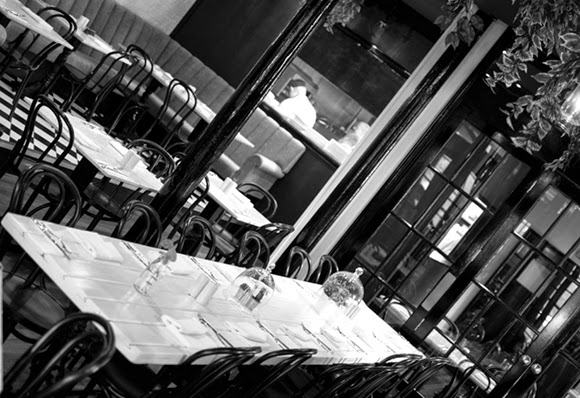 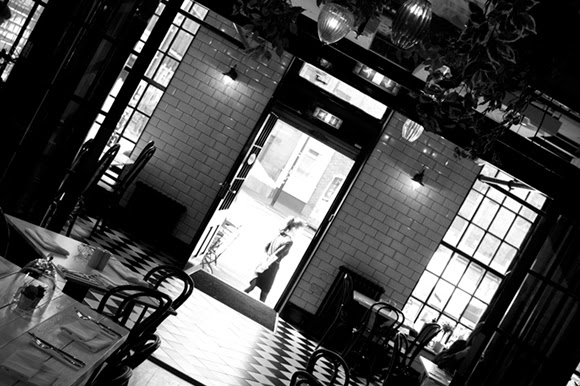 From the Light bites part of the menu we ordered the Minted Lamb Ballantine. Slow braised lamb with mint, feta, olives, red onion marmalade, cucumber ribbons, and confit cherry tomatoes. (£6.95). Also the Goats Cheese Bonbons. Panko breaded goats cheese bonbons with pickled red cabbage tapenade, roasted red peppers, and pea shoots. (£6.50). We were really impressed with the presentation and both tasted as good as they look. 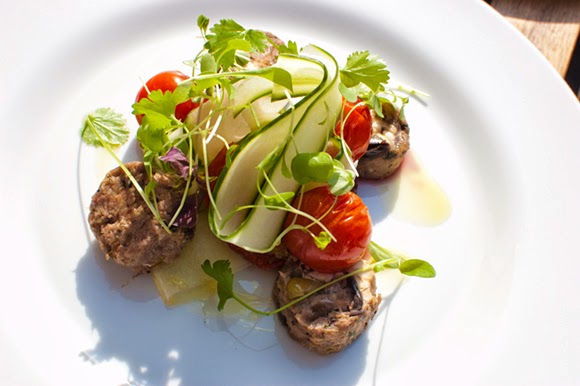 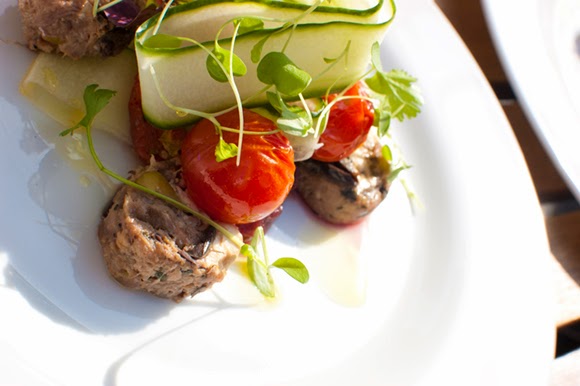 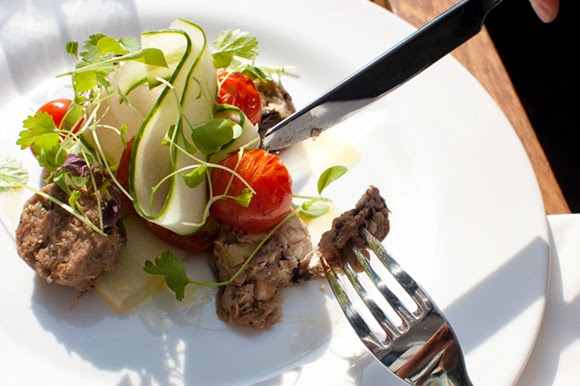 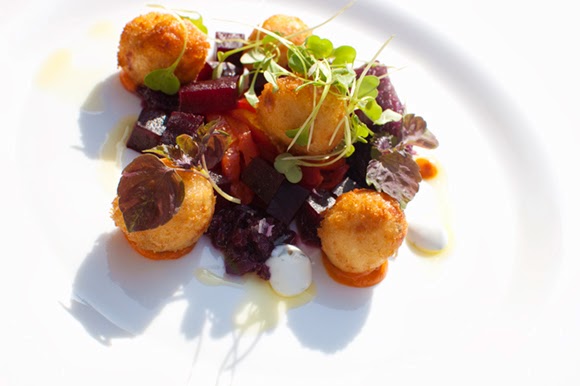 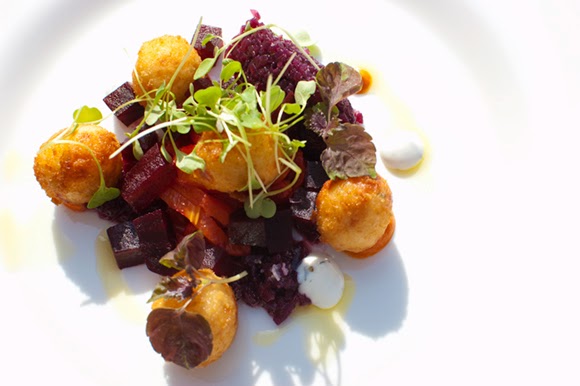 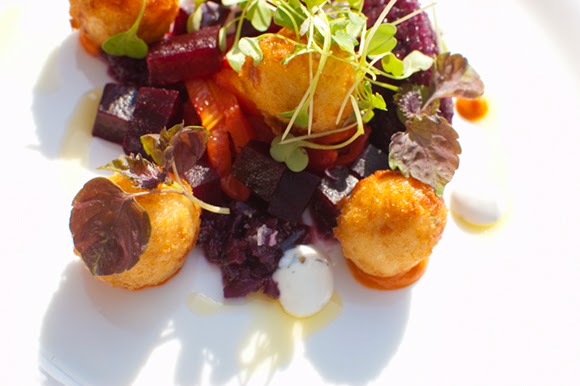 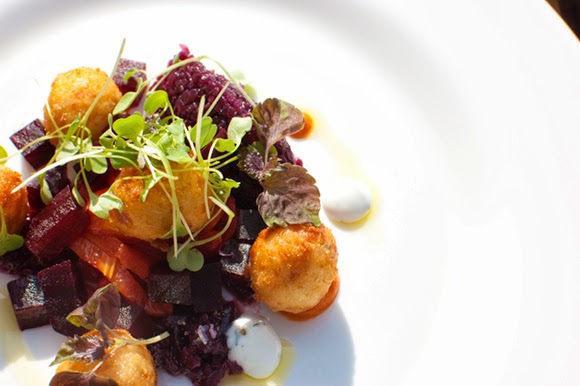 It was at once obvious that we were in the hands of a kitchen who know what they are doing. The head chef and some of the team are from Simon Rimmer's Earle and Greens. (I've been to the latter and very decent it was too.) I would say that this food was a level above where I presumed it'd be. The portion could have been a tiny bit bigger though for me for the price, but it was very nicely put together. They are clearly doing things the right way, with flair and attention to detail. 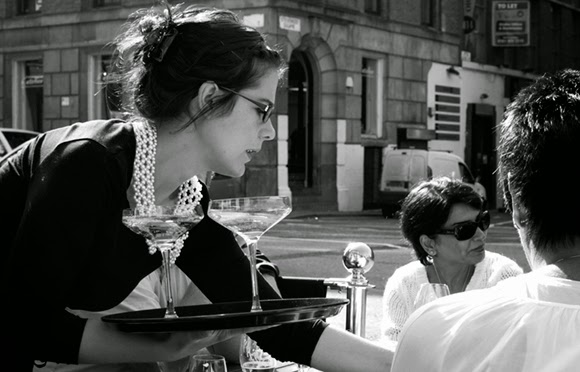 A chat with Grace from Rosylee Tearooms confirmed it; she really knows the industry well, and it really shows already. You'd be surprised at how many places open without a clue and with a gaping hole in their business plan; the food's just not good enough. (Not mentioning any names). She told us that they're not having an official opening for a while but a long soft opening to get everything just right. They're planning events like a jazz singer; we were saying that's another thing places often get completely wrong; loud and crap pop music can totally spoil the ambience of a place (the only thing Mr Coopers got wrong for us).
We shared a mains as we have a bit of food fatigue at the moment. It had to be the Fish & Chips. Beer battered cod steak with thick cut chips, Manchester caviar, Rosylee tartar sauce and a saffron crème fraiche (£11.95). 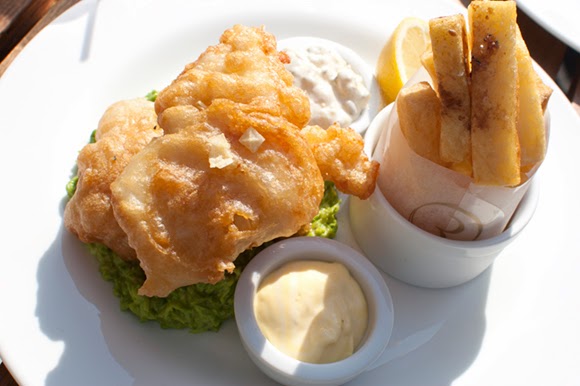 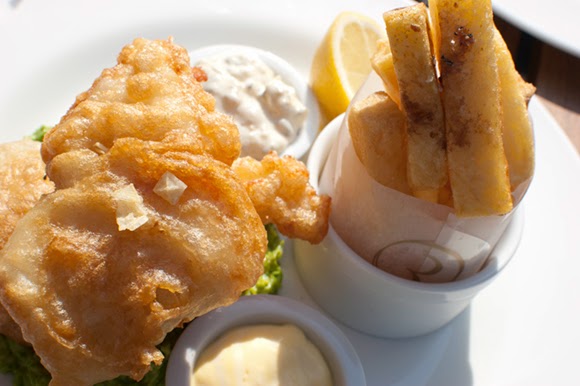 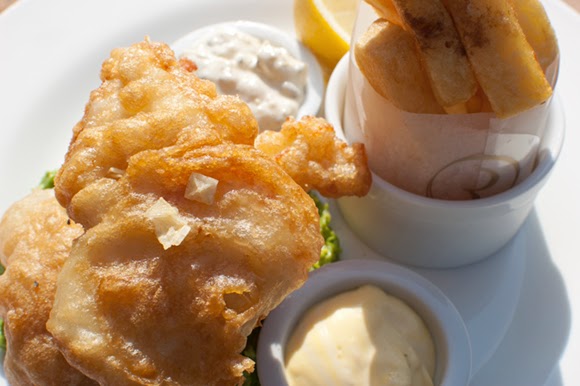 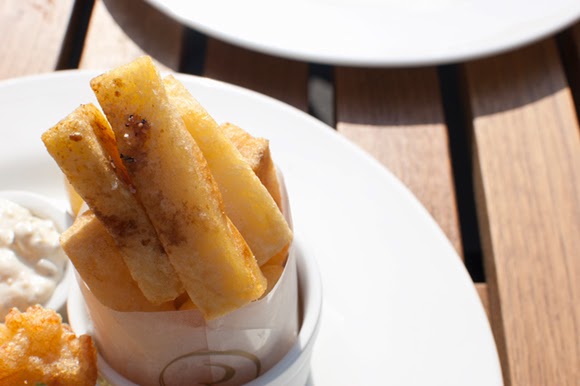 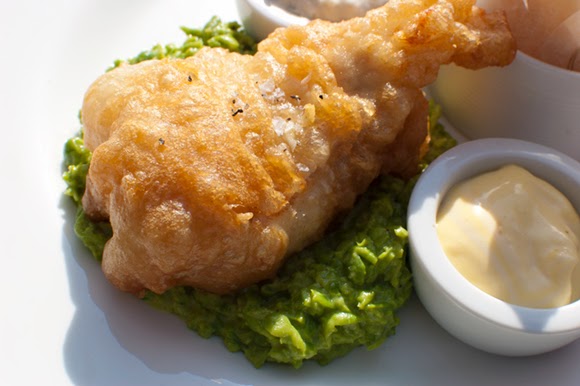 Lovely crispy batter, excellent fat chips (although I'd prefer French fries), and very nicely presented again, this was another total winner for us. I suggested to them, maybe they could offer a few other types of fish as an option as cod's so bland, (and unsustainable), but otherwise it was all good.
We had to go for a couple of puds. A freshly made éclair and a fabulous Crème brûlée . The subtle addition of rosewater lifted it from a good Crème brûlée, to one of the best I've had. The éclair was very good from what I remember, although it was pretty much down in two bites with me. 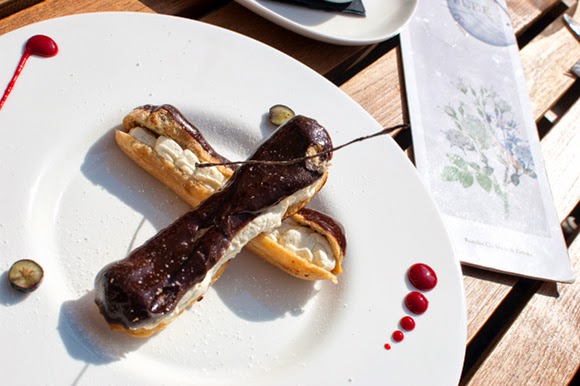 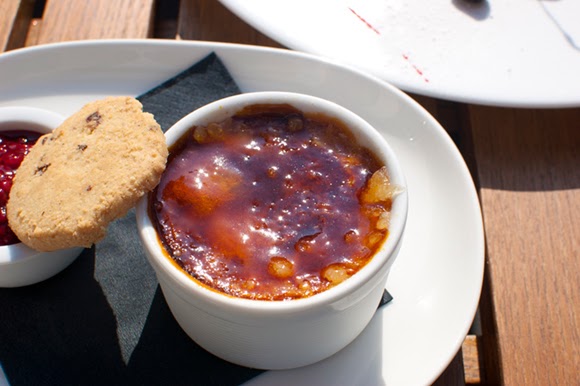 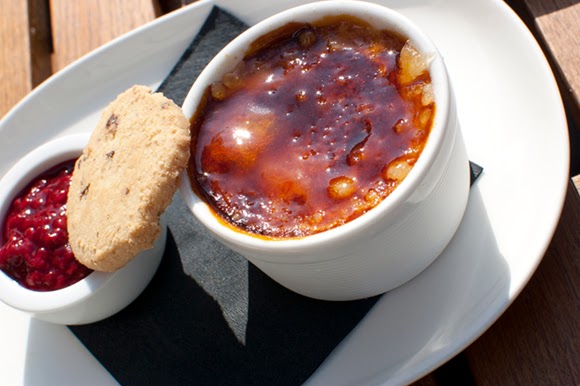 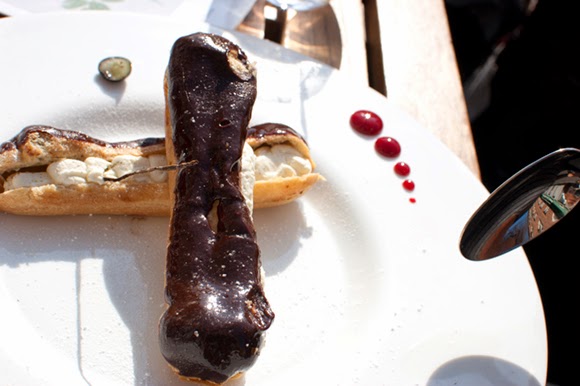 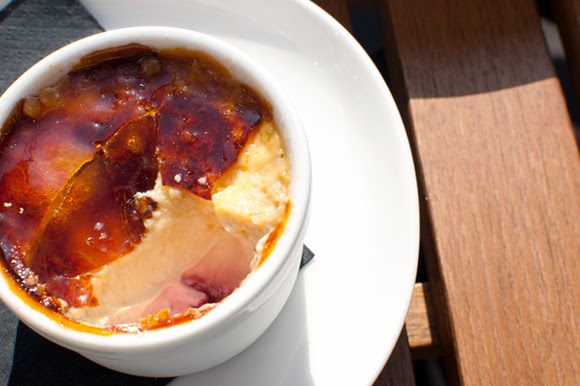 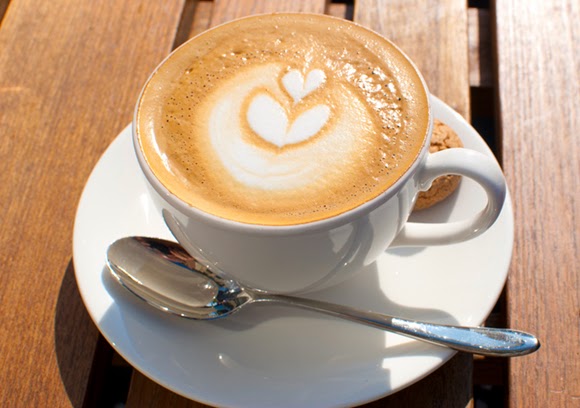 The lunch came to £35, but they'd sent out the desserts for free, which if you know me, you'll know pleased me no end. We'd already fallen for the Rosylee Tearooms anyway.
I can't say enough good things about this place, we really liked it. One of my favourite none Rogan restaurant openings of the year I reckon.
So I suggest you go down to Stevenson square and try it for yourselves.
I cannot guarantee sun though, or friendly Dutch football fans. 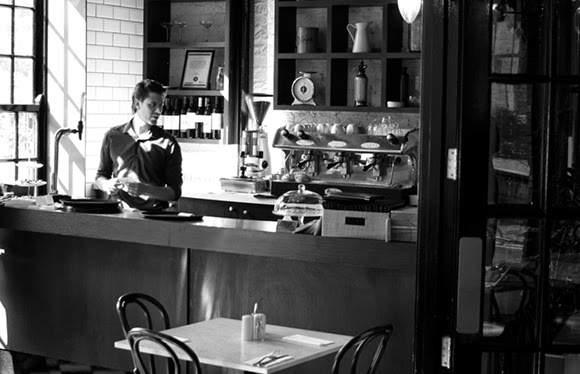 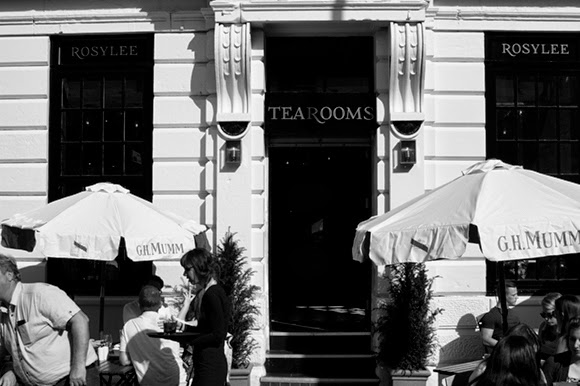 Price: Pretty good. A tiny bit overpriced for me. But it is the NQ.
Service: Lovely. Slow at times though.
Atmosphere: Loved it, inside and out. The sun helped  as well.
Food: Very good bistro food.
Star dish: Minted Lamb Ballantine.
Score: 7/10.

Follow @Bacononthebeech
Posted by Bacon on the Beech at 13:20