I returned to Manchester House on Friday with a few friends. It had been booked months ago, long before I was invited to the preview, but problems with the building work had postponed the opening. We went to Artisan next door for a cocktail first. This place just had a real pasting from ‪Marina‬ O' ‪Loughlin‬ in The Guardian. In an amusing but essentially meaningless review, she hated pretty much everything about it. But what was the point in her going there? Artisan is quite simply not for the likes of her, it's for people (not foodies), who want to go out have have a fun night out in a 'glamorous' setting. The food is never the star, but it's enjoyable for most people - and it works. It would be like me reviewing a vegan restaurant; I'm never going to like it. To be honest, Artisan is not really for me either, I'm too old, but at 7pm it was busy enough without being crowded, and none of the kinds of people she mentioned were in there anyway, it was actually quite chilled sat at the bar. We necked our cocktails and went next door. 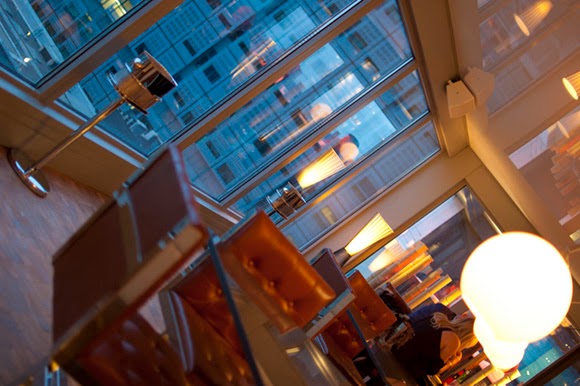 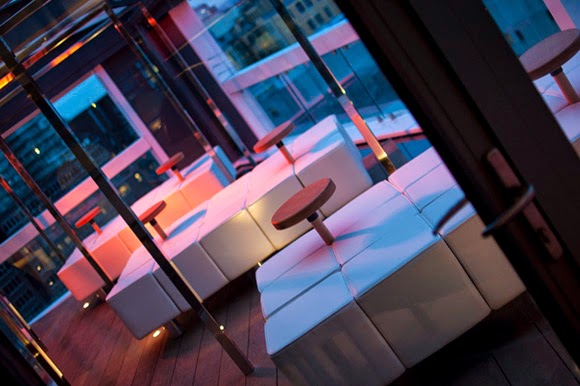 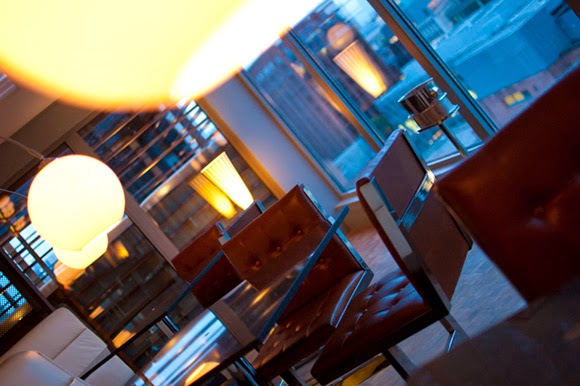 People who rally against the likes of Artisan, but not Manchester House should be wary though, they're both owned by Living Ventures, and they feel very similar to me, you spot it as you go from one to the other; they're even linked by an interior bridge. A similar vibe, and design, Manchester House feels very much the Living Ventures operation, similar clientèle too from what I could tell. This could be a good or a bad thing depending on your viewpoint. Generally, I like LV restaurants for what they are, but this could be a problem for Manchester House as a brand if they are looking for Michelin stars as I'm not sure LV restaurants are ever really about fine food; it's more about the experience as a whole, but more of that later.
My friends loved the cocktail bar on the 12th floor, although the cocktails took an age to get to us, (20 minutes), they were just about worth it. I had a Smokey Old Fashioned, it was lovely.
It's a seriously impressive space as the sun goes down and the lights go up. 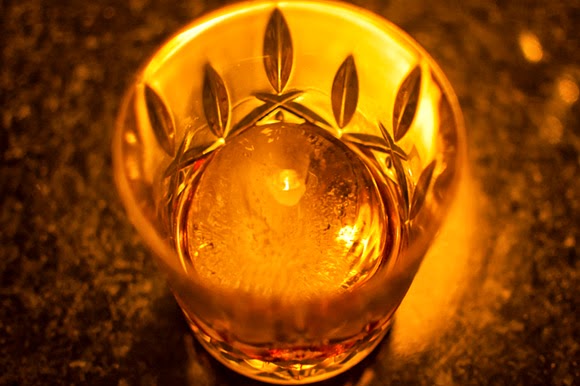 We went down to the restaurant on the second floor. As I mentioned in the preview, I really like the interior, and its industrial chic. If anything; at night it's even more impressive. We were very happy with the booth at the side looking over to the kitchen, it's a hive of activity, the place was really buzzing. 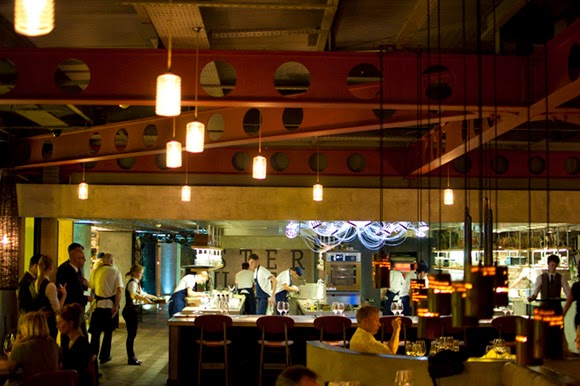 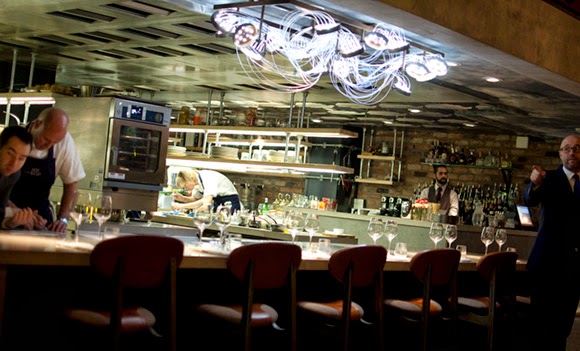 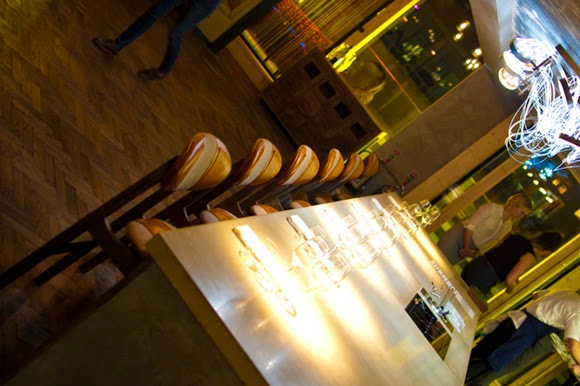 Onto the food. We all had the 12 course taster menu, with two of our party not eating meat, so they had replacements. I didn't want the famous prawns dish as I'd had it last week, and wasn't really loving it, so managed to negotiate the lobster tails instead. Chef Aiden Byrne himself popped over for a second to let us know, which is always a really lovely touch I think. He always comes across as a very likeable gregarious bloke, which is good for the restaurant too, as it adds to the experience.
The 12 Course Taster Menu.
Chilled Broad Bean soup. I liked this, a nice little starter.
Bacon and Onion Brioche with Pea butter. I quite enjoyed this dish but I want more pea flavour. Despite using very modern techniques, the end result is that it tastes just like watery liquidised peas to me. The bread and butter are the best things about it. 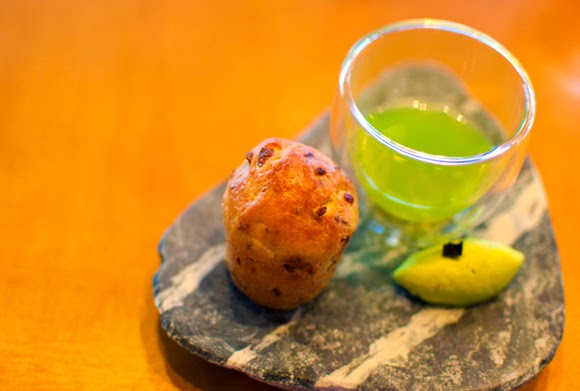 Razor Clam, squid and pepper. I've had a lot of razor clams recently, most notably at Tickets and Aponiente both in Spain. This was nice, but it didn't blow me away, I'm not really sure why. It looks pretty though; beautiful presentation. 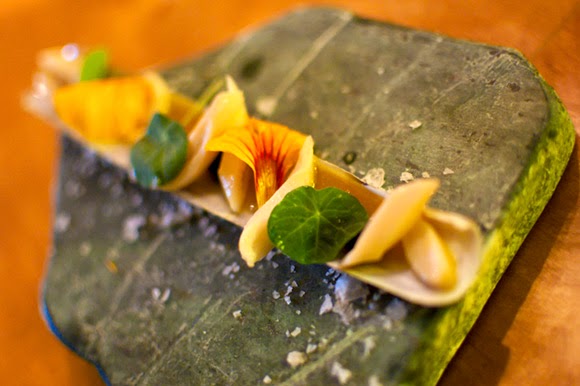 Braised Snails, potato and parsley. Surprisingly this was my favourite dish of the night, it's lovely and creamy. It also sparked a debate on our table, can none meat eaters eat snails? They eat fish, but obviously not; but it is a grey line, suppose the snails can swim was my argument? 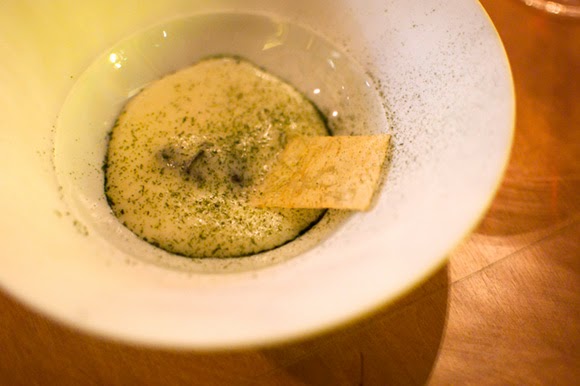 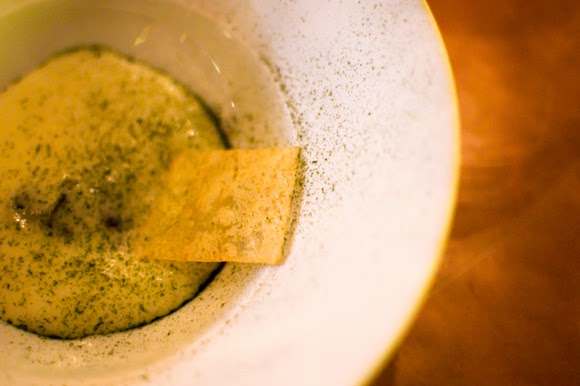 Poached lobster tail with smoked apple purée. I was expecting big things of this dish off the a la carte menu, it's a jaw dropping £50! It was fine, but if I'd have paid that much I'd have been a bit disappointed to be honest. The quality of the produce is not in question, (which of course is expensive anyway), but there wasn't a lot more to it really. It's good, but it's the level of expectation driven by the extremely high price that's the problem more than the food itself. 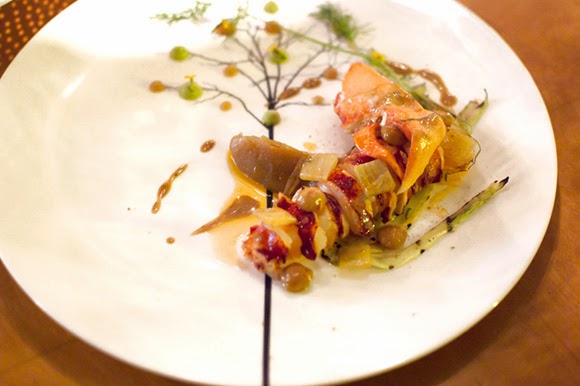 Foie Gras, palm sugar, cherries and pistachio. This dish is almost famous already. I like it, but not quite as much as others seem to. For me if you take away the best thing about it; the brilliant fake foie cherry (which is a little trick a lot of the Spanish chefs use; originally developed by El Bulli I always think,) you have a pleasant very enjoyable dish, but for me nothing more than that. But as it's Manchester Confidential's best dish of the year, it must be just me that's wrong. 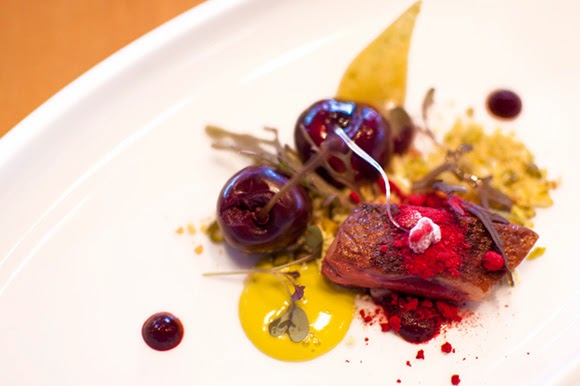 Beetroot oyster and Oxtail. The inspiration of Basque chef Eneko Atxa is most obvious on this dish. When you have this sort of presentation, it's imperative that the flavours match, they need to be intense. I noticed the oxtail broth was stronger in flavour than last week, and the oyster was still very decent; but I did feel a little underwhelmed if I'm honest. Is the smoke supposed to be the smell of the sea? As I can't smell it. I still like the bread element though. 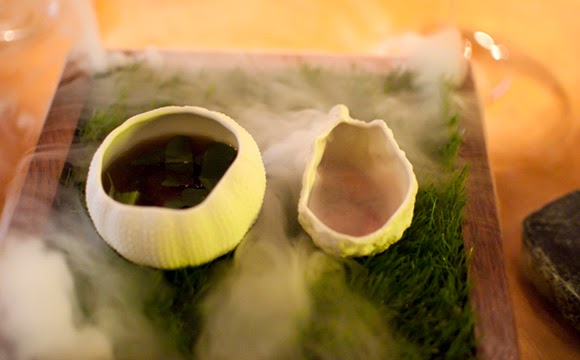 My 'Pescatarian' friends had a Seabass at this stage as a replacement, they said it was well overcooked and had clearly been standing for a while, but this was removed from our bill later. These sort of mistakes cannot come out of the kitchen when we're paying £100 per head.
Potato and artichoke salad with truffle. We all really liked this one. The hot and cold combination is something I've had a lot of lately and it really works well. 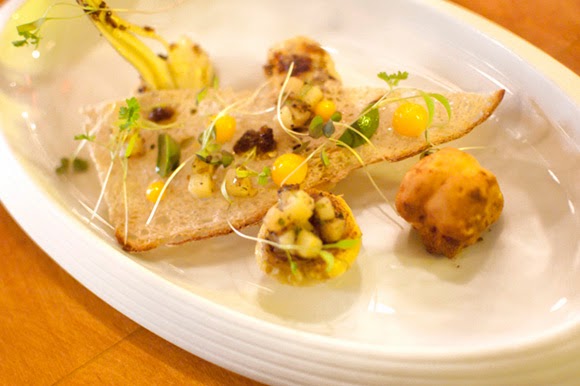 Turbot, morteaux and choucroute. It didn't really do much for me this dish although pleasant enough.
Chilled beetroot gazpacho and avocado sorbet.
Pork Cutlet with pineapple rose and rosemary. I think the pork was overcooked and I didn't much like the pineapple with it. 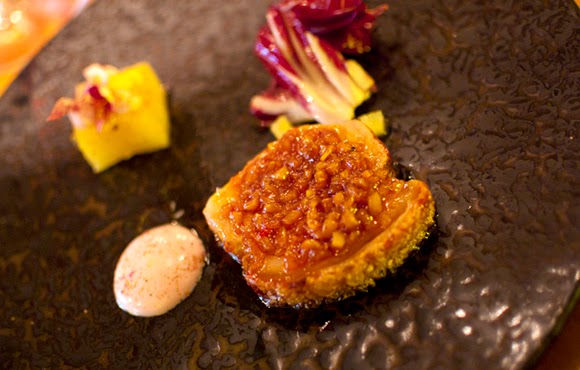 Manchester Tart. I didn't enjoy this as quite much second time around. 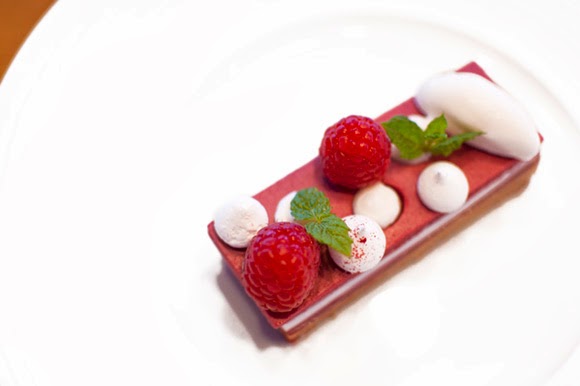 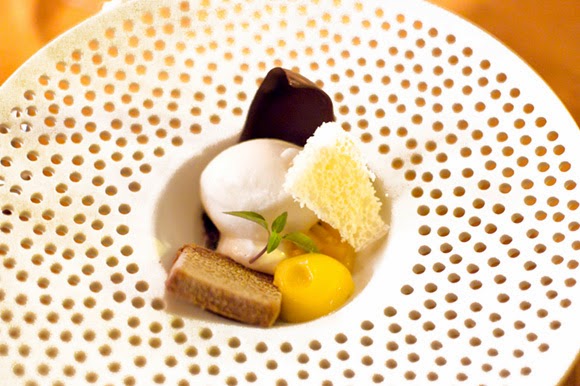 The service was good, if very casual. I think it needs to step up a bit though. If they are after a Michelin Star; only the sommelier really impressed on that sort of level. He handled our embarrassing restaurant-name dropping with aplomb and put up with our arguments over the various wines we were sampling.(New vs Old World.) Still, it's early days, it's only just opened so nerves are to be expected with other staff members.
I think Manchester House needs to find it's feet and identity. For me it feels way too much like another Living Ventures place rather than the Michelin starred restaurant it aims to be. Rather than move staff over from other LV restaurants, I think also employing some people with experience at a higher level would be a big advantage. Perhaps they're harder to come by. This was the real benefit The French had. They brought in staff from L'Enclume, so they were cooking with gas from the off. It felt like a shit-hot operation from the beginning, Manchester House doesn't quite yet, but it is early days to be fair.
My friends (all female) mentioned the 'Stepford wives' as they christened them. There were indeed a lot of beautiful glamorous women employed here, and that makes it look like somewhere like Artisan or Neighbourhood to be honest. It's a million miles away from The French. For us, this wasn't really a good thing. It needs to decide if it's a posh version of Artisan with much better food, (as it currently feels like to me,) or if it wants to go for the stars; the two things don't necessarily go hand in hand. 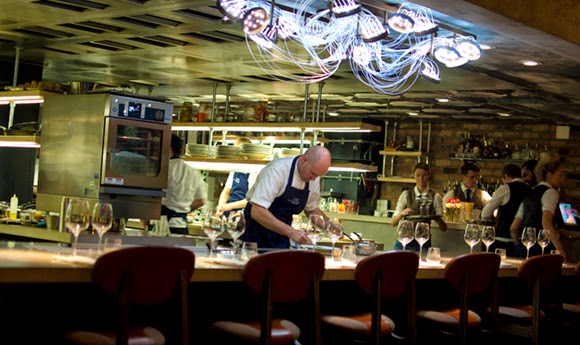 Onto the food: Chef Aiden Byrne is a very talented chef, that is very clear, without doubt one of the best in the North West. But the type of food he is trying to achieve here is very difficult to get right. It's made me realise how rare it actually is to totally excel at this highly complex style. On this visit, I'm not sure he quite achieved it yet if I'm honest, in my experience of it anyway. Probably only a handful of chefs in each country manage it, Quique Dacosta and the Basque chefs Eneko Atxa and Andoni Luis Aduriz of Mugaritz for example in Spain, and even then, it's a style that not everybody takes to. (I personally love it.)
Expectations are very high as is the price tag; but they set this bar themselves. For me, it would have been better to pitch it a slightly lower in price as well and not even mention a Michelin star at all, as currently, this doesn't feel like a place that could achieve a star yet, and you can't just throw money at it, it doesn't work like that.
But like I say, it's very early days, I really hope it does achieve a Michelin star, as I expect The French will this Thursday. The existence of Manchester House alone is amazing for Manchester, and I personally want to encourage and support it as much as I can. But I have to be honest. I'm hoping it's helpful rather than anything else, as I always try and be as constructive as possible.
My friend said on the night; "there wasn't any depth of flavour in anything we ate." Sadly, I have to agree with her. The food was all good, but it wasn't £95 worth of great Michelin star level food for us.
Perhaps it's my fault, I was expecting too much, but it is a lot to pay for dinner - it's Michelin star money, and that has to justify the cost in terms of food and service, and on our visit it didn't - for us anyway. That is of course a subjective thing, many may disagree. 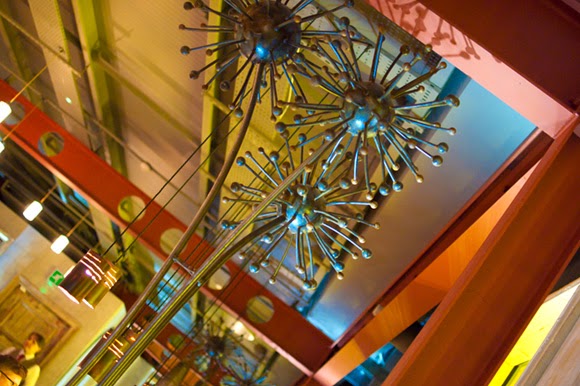 So while we all enjoyed our night as a whole, there was no real wow moment in the meal for any of us, and if I'm paying £120 including wine, I need it. Interestingly, our Mrs Bacon 'replacement' for the night (she was at a leaving do and came down later), loves food but perhaps has not been to quite as many expensive restaurants as the rest of us, but she felt exactly the same way. So it wasn't just that we're spoilt in going to El Celler de can Roca and the rest. Something was missing for us all, the magic just wasn't there, yet.
I really hope it comes in time though, and I'm sure it will, as they can't afford this to fail.
I'm optimistic Manchester House will go from strength to strength, perhaps I'm being a little unfair in judging it too harshly too early, but it is honestly how we all felt at the time.
To conclude; it's like but not quite love, yet.

Follow @Bacononthebeech
Posted by Bacon on the Beech at 16:30