When you make a sweeping statement like 'Best Indian in Manchester' as I did of Mughli the other day, there will always be a few people who disagree. Of course, I don't know if Mughli is the best Indian restaurant in our city, I've not been to every single one, but it's my favourite. A few people mentioned Zouk as their preferred choice, so I thought I'd have to check it out.
I was armed with plenty of recommendations of what to eat as well, although when I'd mentioned lambs brains, Mrs Bacon had looked aghast as expected and said that she just wanted something "like a rogan josh" Rogan Josh!? I said. No, we have to have something authentic. She didn't look convinced. "Brains are not my sort of thing" She said, frowning. She's not a fussy eater by any means, but she draws the line at offal and "that sort of thing".
So we went on Sunday with other card carrying members of the Chorlton Curry Club.
First impressions were that it was another "posh" Indian and that it was really busy. 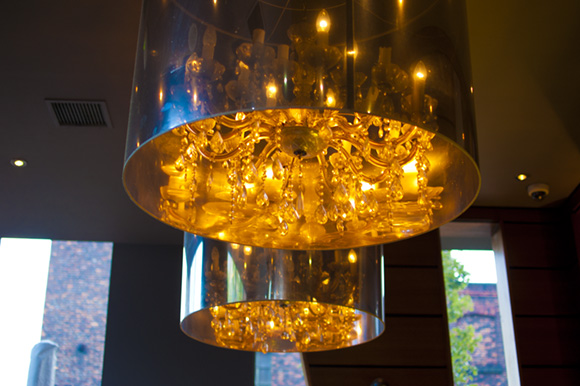 As I always think it's polite, I went over to the older gentleman at the door. "Do you mind if I take photos for my website?" I asked. He shrugged his shoulders and gave me a withering look, that said"I don't give a flying f*** what you do!" It was not the best of starts, I was irritated already, and we'd been there 2 minutes. Neither did the guy at the bar change our minds. Some people just should not work in the service industry, he is one of them. He had absolutely no warmth at all, and no people skills, the general attitude was "why are you here annoying me, getting in the way of my job?" They had no beer on tap either. We all settled on large bottles of crap cooking lager Cobra, for an astronomical £5.50. I was already really annoyed and we'd not even sat down yet. 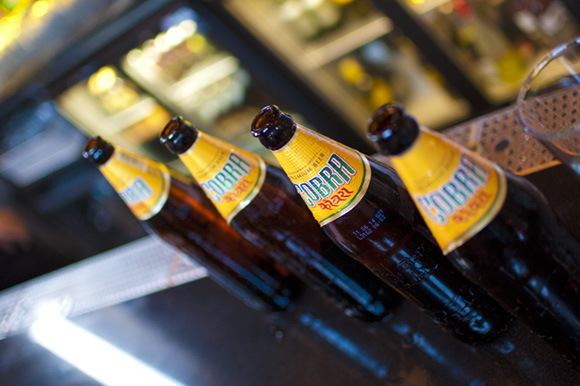 Things looked up as we were shown to a booth at the far end. It was so noisy in there though. They were also playing really loud 10 year old house music. Funnily enough we're all veterans of The Southport Soul Weekender, so you could say we're all aficionados of quality tunes. But not when we're in a restaurant, listening to a baseless version of Masters at Work's - Work over crappy tannoy speakers. It just doesn't work, it's so incongruous - two worlds that should never collide. The beats actually made us eat faster as well! The lighting was abysmal, not dark cosy, just dark, you can't read the menu. None of my photos came out very well. In truth it was like eating in a giant murky atmosphere free barn. The table was way to small, we were struggling for space. 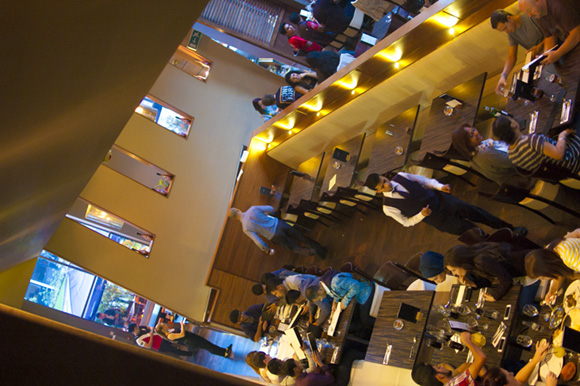 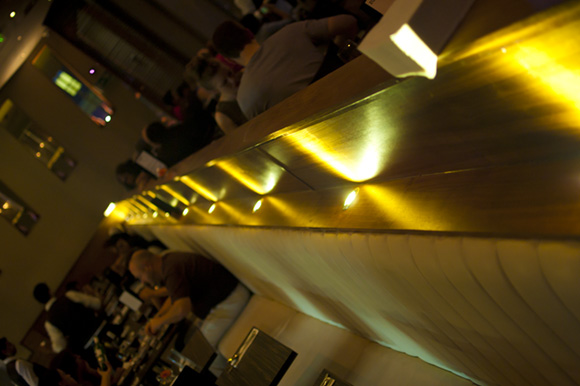 Our poppadoms came, they were good and crisp, but the dips were dire. The yoghurt was awful, like they just poured own brand cheap yoghurt into the tiniest of pots. 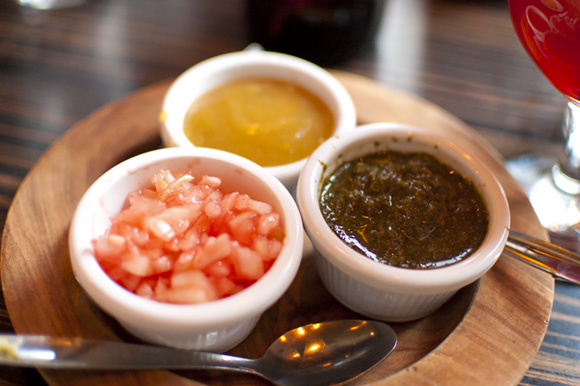 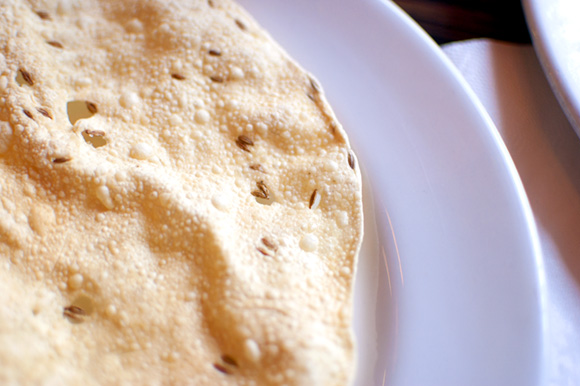 They were understaffed as well, nobody would clear our table for ages. It had the air of a restaurant which is badly run, where you rarely see a waiter, and when you do they've not got time for you. I have to say though our waitress Katerina was excellent, friendly and charming, she was the exact opposite of the arrogant idiot who'd served us at the bar.
Ok, now onto the good stuff. The food was sensational. Tandoori Mixed Grill starters (Mixed char grilled starter with Chicken Imlee, Seekh Kebab, Lamb Chops & Chicken Drumstick £6.95) were all really good, that char-grilled almost burnt taste they do perfectly. I polished off as much of as I could get hold of. I also enjoyed the Punjabi Lollipops (Chicken marinated in pomegranate wrapped around a chicken wing then gently cooked over hot charcoal £3.25.) 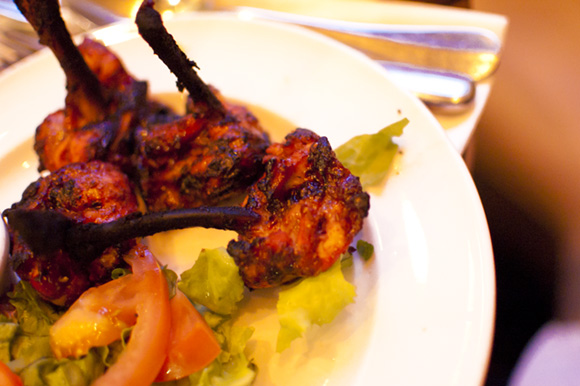 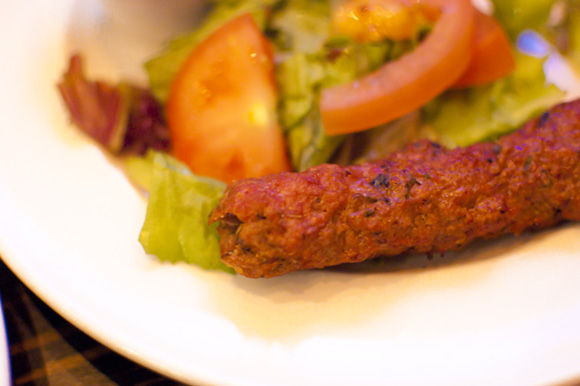 The mains were just as impressive Lamb Nihari (A traditional speciality from Lahore: slow cooked lamb with a thick & spicy sauce £9.95) melted in your mouth like tender meaty butter - rich, fatty and gorgeous. 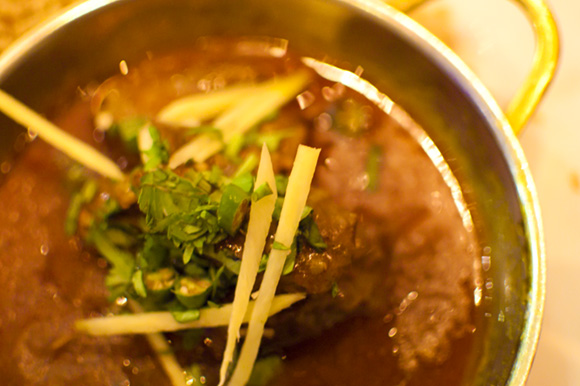 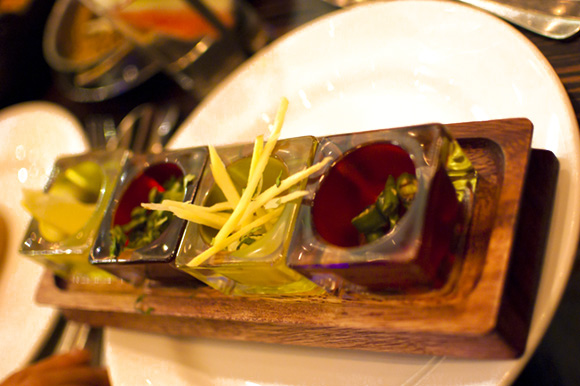 The Magaz (Pakistani speciality of sheeps brain pan fried with onions, tomatoes, green chillies & garam masala £6.95) was like smooth spicy mince. I enjoyed it. Mrs B said she was "glad she'd tried it" but wasn't a convert. 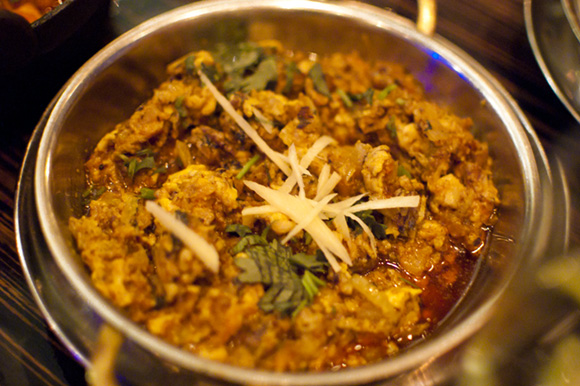 Her dish was a real triumph as well, The Handi (slow cooked over burning flames with tomato, onions, garlic and Zouk garam masala, chicken £8.50) creamy, simple and just delicious. Strangely the nans were adequate rather than sensational. Why do so many places promise a garlic nan then never actually put any garlic on it? Such was the case here.
We were really stuffed now,  so we paid and buggered off. 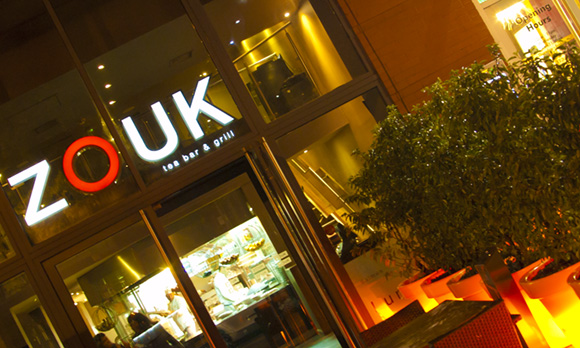 So my views on Zouk are that the food was superb, but that is the only element that they had right. Nothing else worked for me. The room was just awful, dark and noisy with dated house music playing loudly and unnecessarily, the service (bar one waitress) was poor, they were well understaffed, and some of the waiters were just plain rude. The whole impression I got was; we're so busy, we can get away with what we want!
Not with my money they won't. I won't be back despite the fantastic food.
In conclusion, it's not a patch on Mughli in my opinion, as a whole experience, the food is equally as good there (and authentic) but in contrast the atmosphere and staff are excellent.
Zouk need to understand that you need more than great food, you need to keep the customers happy, and that involves good service and atmosphere which were sadly lacking on our visit. Follow @Bacononthebeech
Posted by Bacon on the Beech at 17:58