The state of our so called 'national dish' is a disgrace. There I've said it. I've been feeling this way for years. Every now and then after forgetting how disappointing it usually is, I go and get some. The smell of the chips wrapped in paper brings back many happy childhood memories. Every Friday night my Dad would go and get chips from our local chippie, Steve's, whilst Mum would be buttering a whole loaf (trashy white obviously) ready to make chip butties slathered in proper butter. I'd probably have a sausage as well, or a pukka pie. I loved chip night. By the way, we'd already had our tea, this was on top of that about three hours later. I was a thin as a rake though. I used to be able to eat everything and not put any weight on, it was fantastic! (I've never really recovered from that.)
So on a whim on Friday we went to get some from our local Atlantic in Chorlton. We actually have one closer that bills itself as the 'only English' chip-shop, but we don't go there, mainly because the chips are poor and soggy. 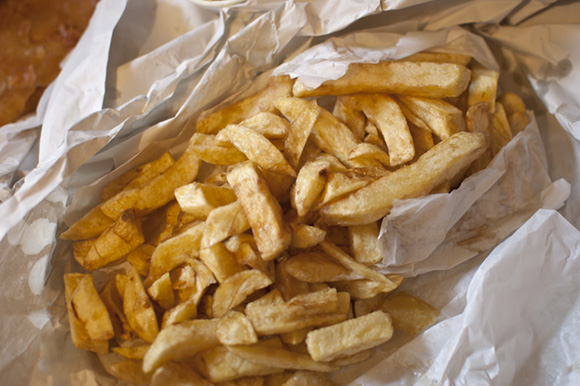 Atlantic are no better or no worse than many other fish and chip shops around the country, they often have a queue, mainly I think because they offer good value for money, the portions are massive. So we shared a fish and chips, there was more than enough for two. It cost about £7, including two cans of old school pop; Dandelion and Burdock, the only accompaniment in my book. 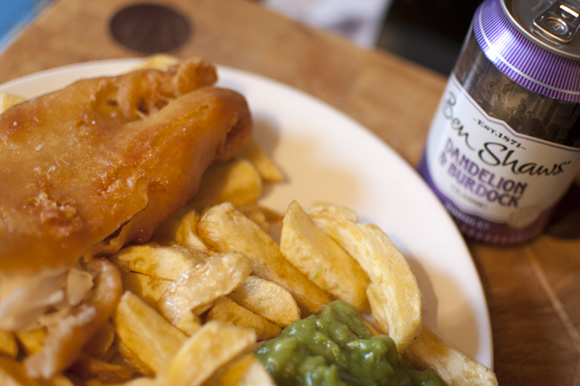 So what were they like? I was sadly disappointed yet again. Firstly the chips. In his book A Cook's Tour, American chef Anthony Bourdain described the chips "as everywhere in the UK... needlessly limp and soggy. Few chip shop owners bother to blanch their fries in low temperature oil before frying, so they are never ever crisp." He's right, they're always soggy, as they were in this case.
Onto the fish. Mrs B chose haddock, which I would have done. However it tasted of nothing but batter. More disappointment. Many people I've worked with over the years professed to 'not liking fish apart from from the chippie.' Sadly I think this is all too common. This is because fish from the chippie is often like this - absolutely tasteless. Mrs B enjoyed the mushy peas though! 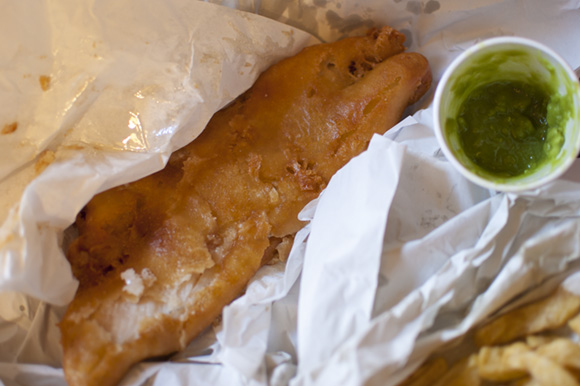 After having a moan on twitter about it, a few people told me about Fosters in Didsbury. I'm yet to try them. I'm sure there are many exceptions that prove the rule, there's apparently a good one in Llandudno junction as well called Enochs. I've never been to that one in Whitby either. But I'm really talking about your average local chippie not 'posh' chippies or famously good ones. I just find the standards are just needlessly poor generally. Surely we should be able to get a decent fish and chips in Chorlton? (Yes I have tried the Baths chippie and found it average at best.)
So it'll probably be another 6 months before I forget again and try another chip shop.
Sadly until then I guess fish and chips will remain better in my memory than in reality. Follow @Bacononthebeech
Posted by Bacon on the Beech at 08:37