It took us three attempts to get into Changos; this newly opened little burrito bar on Oxford Street. First I got there at one o'clock on Friday lunch time, only to be confronted by a long queue of at least 15 people patiently waiting on the pavement. I gave up almost immediately, and we went to Brewdog. They must be doing something right. I reckon it was the price. It's underneath a fiver for a large burrito, and I think Mancunion's generally don't want to spend over that for their lunch. So it's a good deal, and it's freshly made. 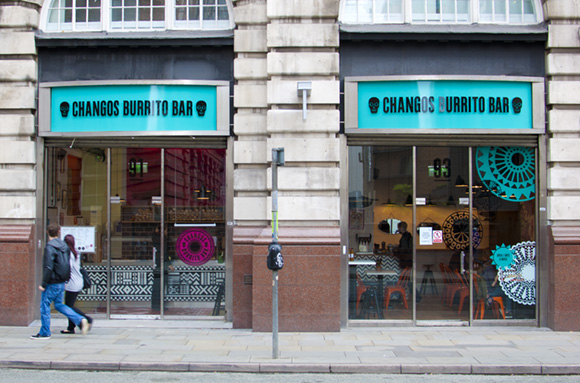 So we tried to go on Sunday at about midday, they told us that they wouldn't open until half past. We went over to the Cornerhouse nearby to get a coffee and to see our film. (By the way I think the Cornerhouse is one of the best things about being in Manchester, we'll be sad to see it leave their current premises for the new building on First Street).
We returned at about 3 on a very dull Sunday afternoon, I was half expecting it to be full of hungover students, but no, it was thankfully fairly quiet. First impressions are that it's a fast food café not too dissimilar to Barburrito. 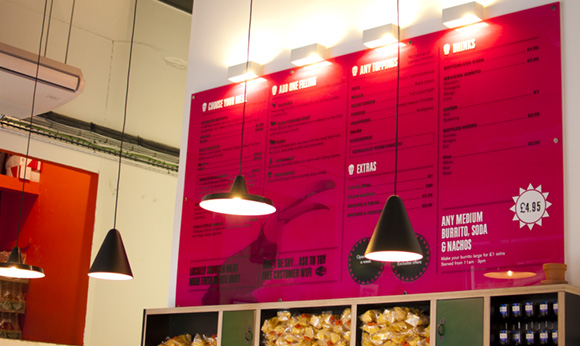 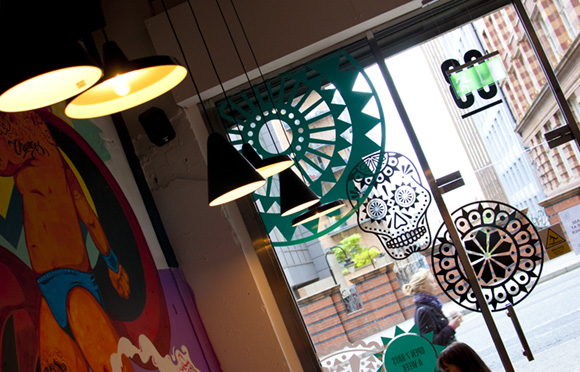 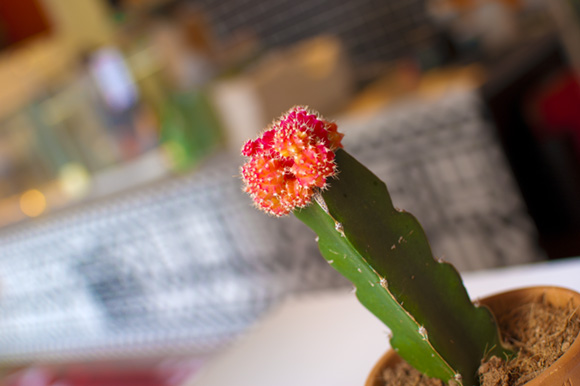 The Spanish(?) woman serving us was very friendly, giving us a taster of the chilli and the beef, so we could make our minds up which we'd like best. The other fella with her did not look that happy to be there to be honest, and wasn't overly friendly. This wasn't a proper restaurant with service, this is clearly a take away venue with a few seats added. A little effort has been made of the interior, but it's like they gave up half way through. There are cardboard boxes on display, and it's just a little bit scruffy despite being new. I liked the mural though and the bits of graphics they have dotted about. 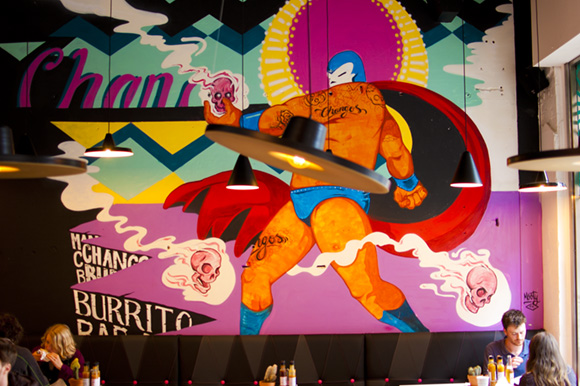 We went for the large Changos Burrito x2, one with Slow Cooked Beef, the other Pork Shoulder. They make it up for you as you wait. We got everything on it, one with hot sauce; Fiery Fiesta, the other with Mango Lime & Hot Habanero.
Also, we though we'd try the Mexican soft drinks they have; Jarritos. Firstly these; they make J20's look like a health drink. The mango was ok, but the Mandarin was just so saccharine and unnatural in taste. Mrs B thought it tasted like tinned mandarin, it reminded me of Mr Freeze orange flavour ice pops I used to love as a kid. It says 'natural flavour' on the bottle; but it's mainly sugar and fake flavouring, no we won't be getting these again, they were pretty damn awful to be honest. 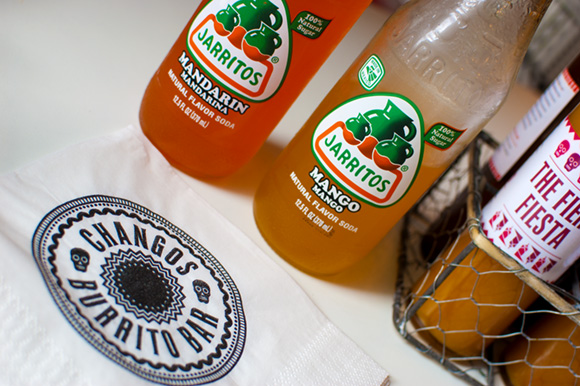 The burritos themselves were ok, they tasted fresh enough, but neither of us could tell which meat was which. We probably made a mistake in ordering all the fixings, as it dilutes the flavour of the meat and makes it bland. I wasn't getting the heat off the hot sauce either, I could have added a load more off the table, but it was too late by that stage as I'd scoffed it all. 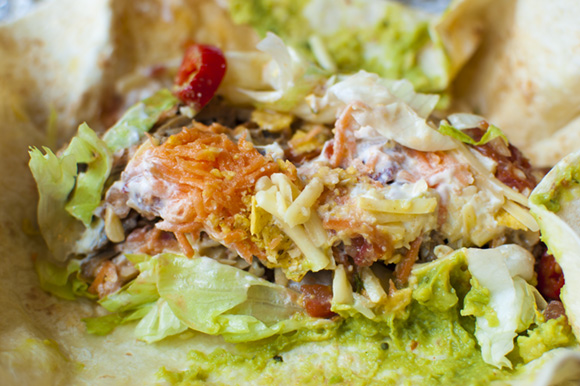 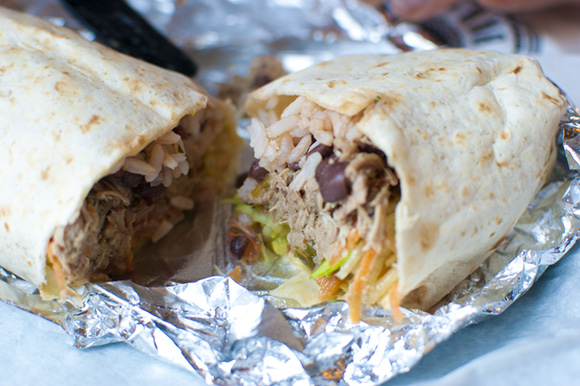 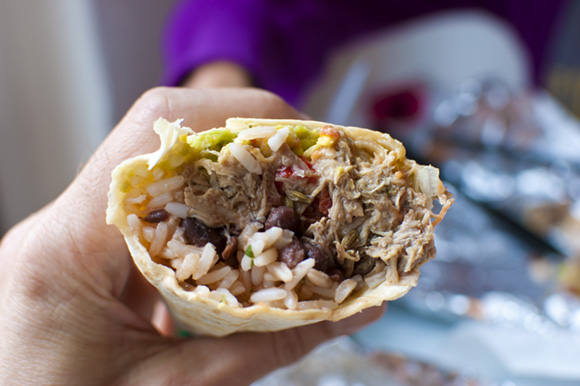 But what's the bother? It only cost me £15 for both of us, and we left after about 10 minutes fairly satisfied. I couldn't tell you if Changos Burrito is better or worse than Barburrito, they seemed about the same to me.
With Mexican inspired places popping up all over town, and with Lucha Libre opening shortly, it seems Changos have appeared at just the right time. It's always interesting when somewhere is so busy they have a queue at lunch time, in this case I think it's the right product at the right price and most importantly the right location.
So, is it worth queuing for? No, not for me it isn't.
But it is a fairly decent lunch and a much better bet than a supermarket pre-packaged overly chilled bland sandwich. And it is a great little business, so good luck to them I say, though it doesn't look like they'll need it. 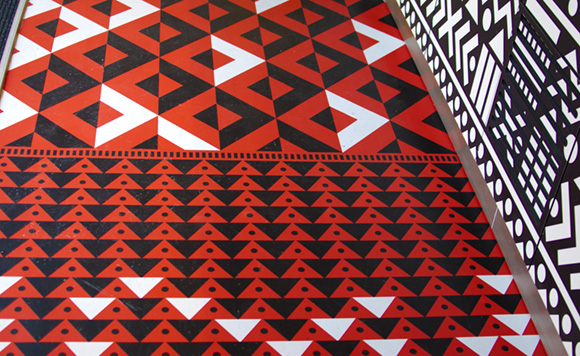 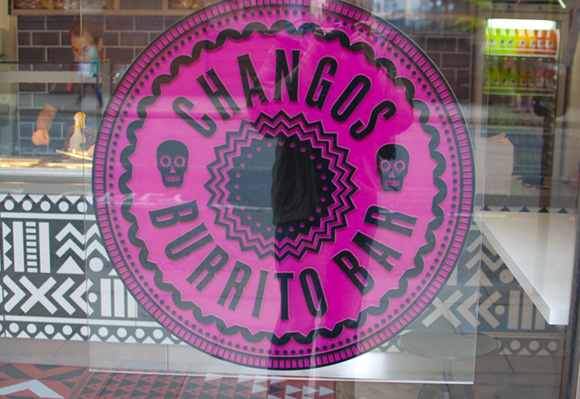 Follow @Bacononthebeech
Posted by Bacon on the Beech at 08:54