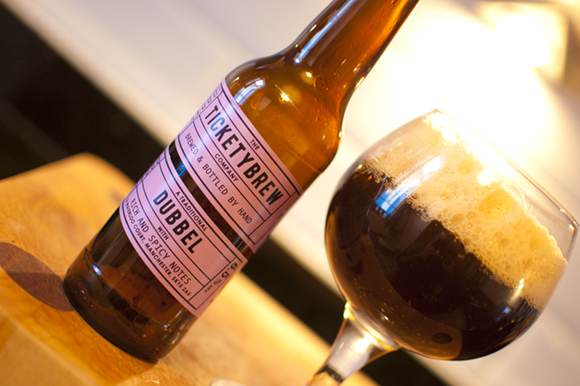 TicketyBrew are a new local brewery that seemed to have sprung up from nowhere. I've heard some good things lately over on twitter, so I thought I'd pick up a couple bottles. It's available in Tiny's Tipple, but I bought mine from Epicerie Ludo on Beech road, I think they were around the £2.40 mark which is fairly reasonable these days.*
Firstly I tried the Dubbel which is their interpretation of the Belgian style. The classic of the genre is Westmalle, a real favourite of mine for many years, so I was interested to see how this would compare. First impressions were quite good, a pleasing mouth-feel, though perhaps it needed a little more strength of character. This was probably my fault in over chilling it though, as it warmed up the authentic flavour was coming though nicely. It's a decent attempt at the dubbel and would make a fine session beer even though it's 6.5%. It didn't actually taste this strong to me! 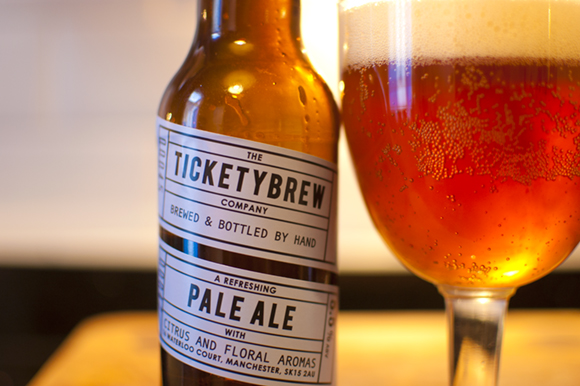 For the Pale Ale I was pleased that they hadn't gone down the Brew Dog route and made it too grapefruit like and overly bitter, but again I would prefer a tad more flavour. It's a pleasing soft beer you could quite easily drink several of at a BBQ or during a night out.
Overall I feel it's important to support local breweries as well as local food producers.
I must stress that I'm judging these against world class beers; Belgian of course, and some recent amazing American Craft Beers from Beermoth in the Northern Quarter.
Considering they've only recently commercially become available this year, they've done amazingly well in both brewing and in distribution.
The British craft beer revolution is very much alive and well in Stalybridge.

ticketybrew.co.uk
* These beers are just £2.10 from Tiny's Tipple in Chorlton.


Follow @Bacononthebeech
Posted by Bacon on the Beech at 18:34