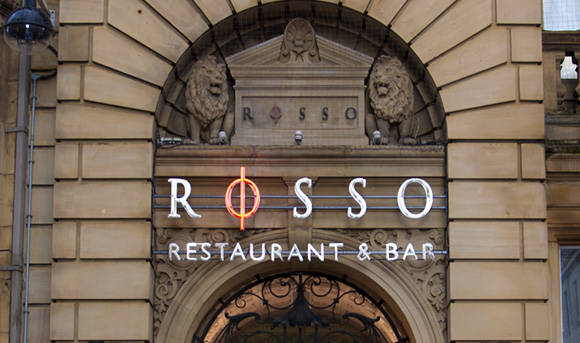 I had very few pre conceived ideas about Rosso in Manchester, other than that it is owned by footballer Rio Ferdinand and that it's an Italian restaurant. We were kindly invited to sample the new a la carte menu. Coming in from a grey rainy city it was a real surprise, its an absolutely beautiful interior. It's Grade II listed, and the dome is simply stunning. 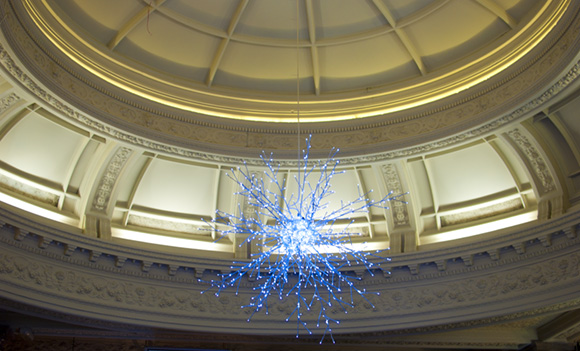 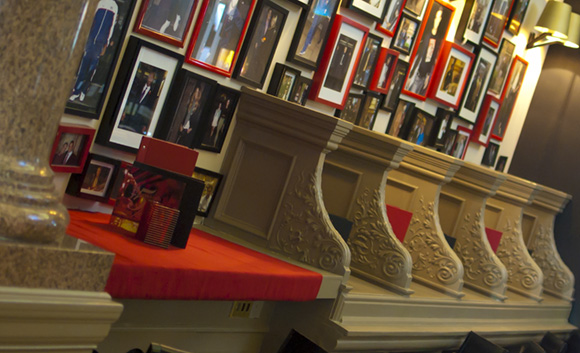 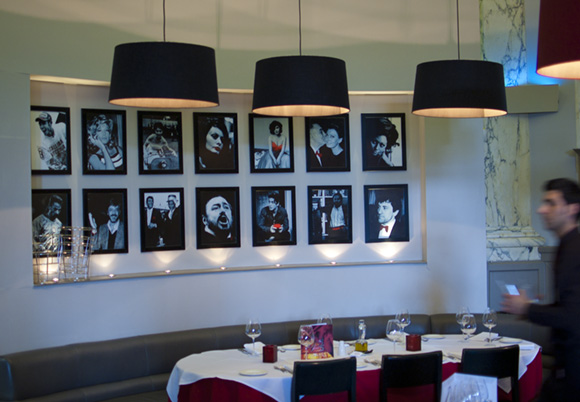 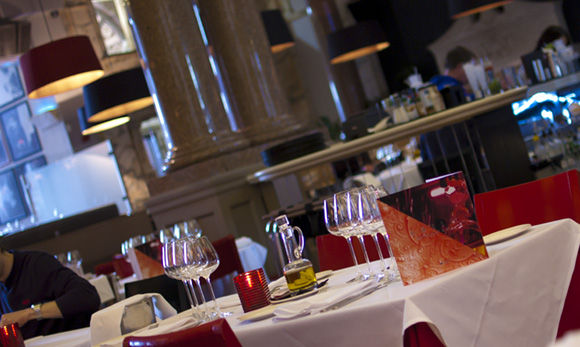 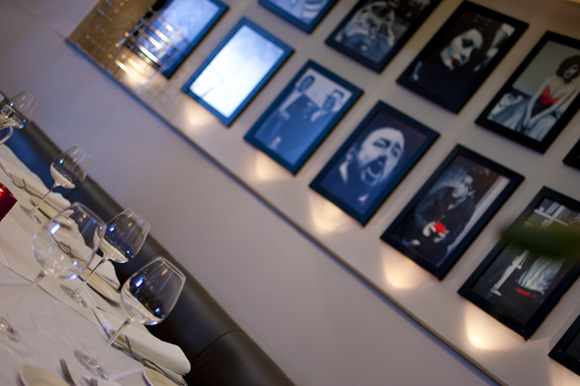 We were shown to our seats; a booth at the back with views across the whole room. The decoration has actually been done sympathetically as well. It doesn't feel like you're in Manchester even though the flashes of red are obviously a nod to United and of course Rosso is red in Italian (it took me a about an hour to piece that one together being a dim-wit as I am). 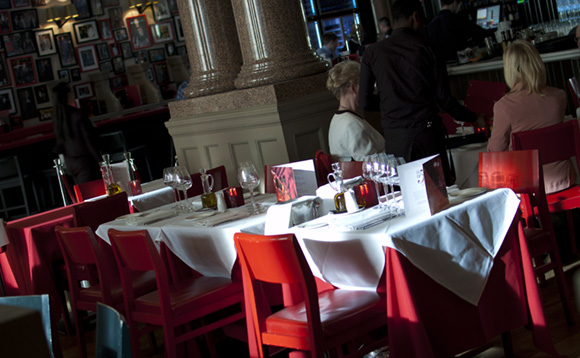 The service was at once Italian with that theatrical flourish that they seem to bring (most of them appeared to be Italian), but not overly stuffy and austere. So far so good.
It was interesting to people watch and it was surprisingly busy for an early Thursday evening. There was a large family out celebrating, post work groups, businessmen, a dressed up married couple clearly treating themselves to a 'slap up meal'; people of all ages. It was like being in a restaurant abroad on holiday.
Onto the food; we got some good complimentary home made bread and big juicy olives to start. 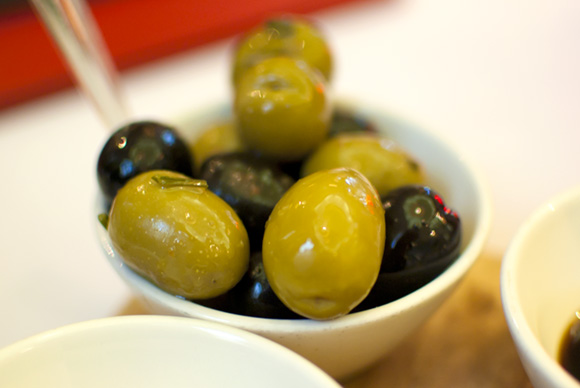 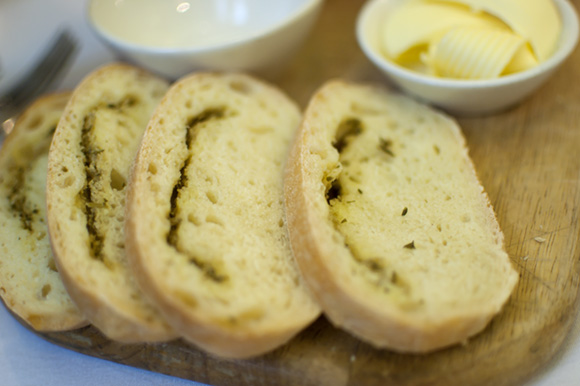 Then Guancette Sfiziose (tender pigs’ cheeks slowly cooked, wrapped in parma ham with prunes and a black treacle jus £9.50.) This dish really looked the part, but we've had some superb pigs cheeks of late (mainly in Spain), they're a real delicacy, super succulent and juicy when done well, but these were a touch dry. A pretty good dish to be fair, but a slight disappointment in truth. 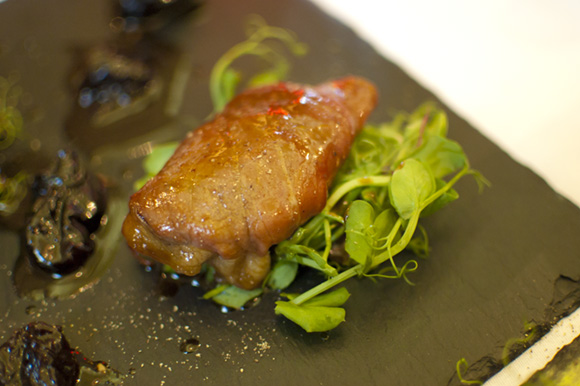 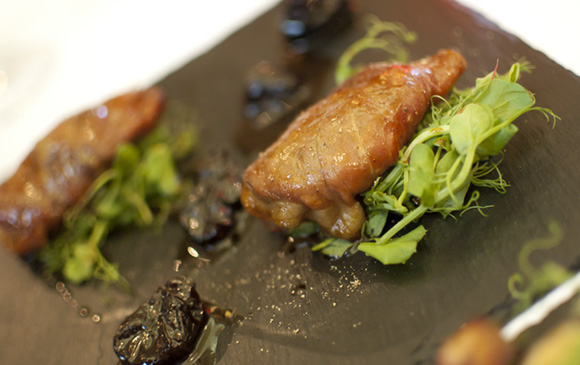 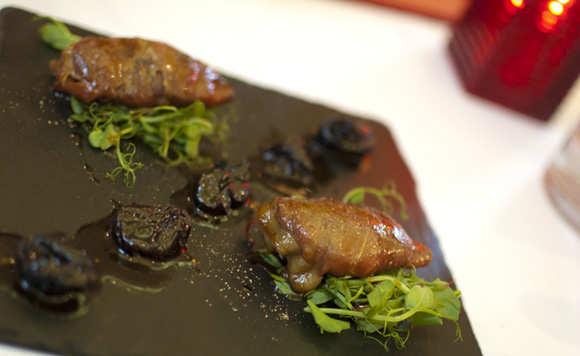 Then Mrs Bacon's choice Capesante ai Piselli e Pancetta (Pan seared king scallops with crispy smoked pancetta set over a minted pea purée £12.95). This was better, a really pretty looking dish and generously portioned. The fish was good quality and fresh and I really enjoyed the smoked pancetta chunks, which I popped into my mouth in one bite. 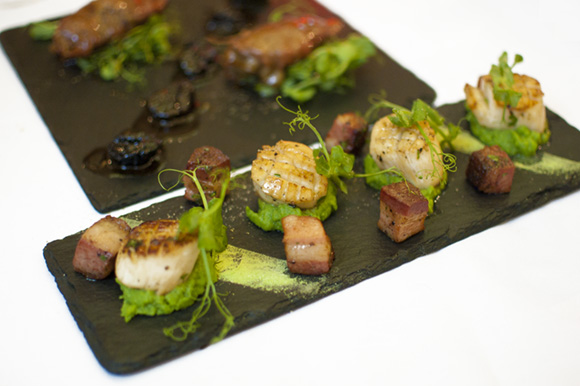 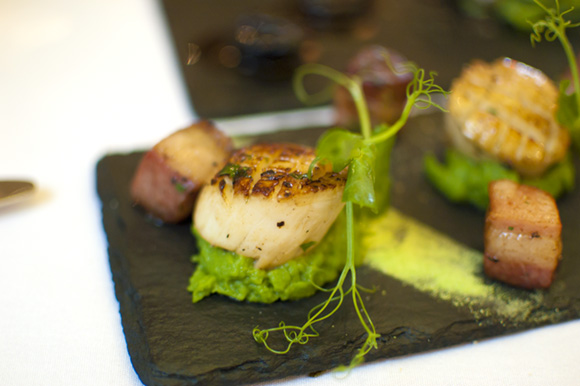 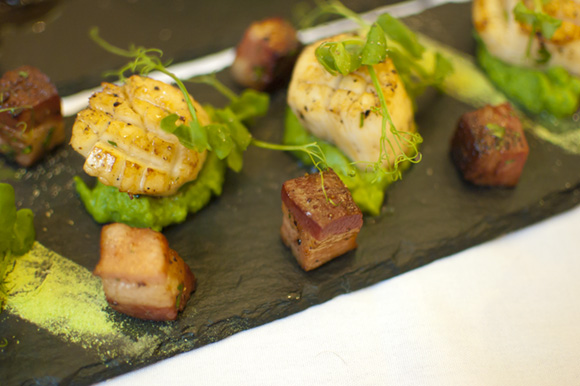 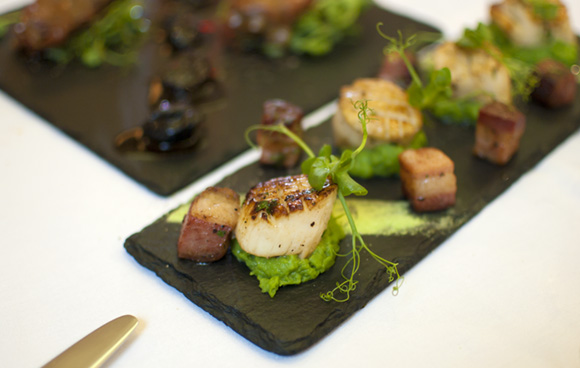 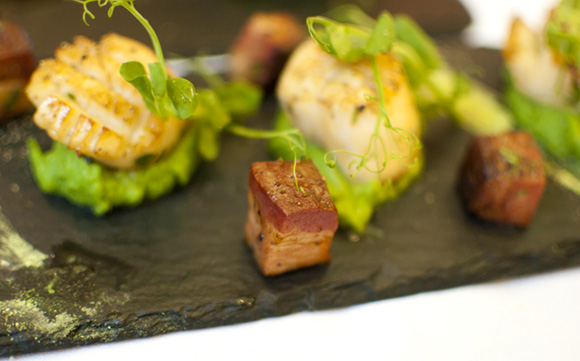 For the mains we ordered three dishes but small portions of each, I'm glad we did, the amounts were generous, especially for British standards. They brought each dish consecutively, which was good as they weren't standing going cold. First the Strozzapretti al Ragu (Egg pasta twists with a slow cooked mixed game ragu topped with shaved Parmesan, £8.95). I was looking forward to this one, translated as 'Strangled Priest' it's the kind of strong dish I love. Sadly though it was another slight disappointment, it wasn't bad, but I wanted that real rich game taste to come through more, it was a nice dish, but the meat was a little dry again and not as succulent as I'd hoped. We recently had a superior Gnocci with Venison Ragu dish from Cibo in Didsbury, I feel this strong more flavourful sauce is what is needed to lift this dish from average to good. 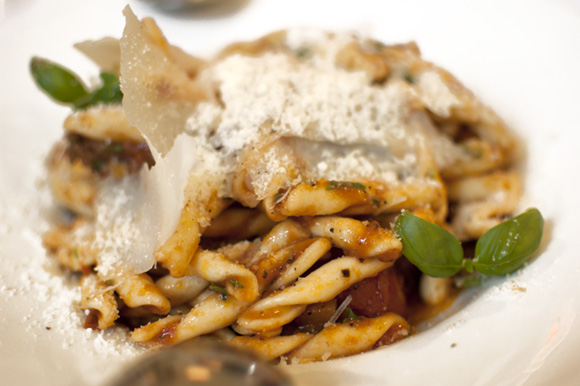 Each time we got a dish, our Italian waiter would come over with a laughably MASSIVE pepper grinder. I know British people probably like this sort of theatrics, but surely if the chef has got a dish spot on, he doesn't want a load of pepper on top? I maybe stand to be corrected here, but I don't think they do this is Italy, I find it faintly ridiculous, but I just go with the flow.
Next we had a Gnocci al Tartufo (Fresh potato gnocci cooked in mixed mushroom and cream sauce, drizzled with truffle oil £8.50). The star dish for us both. Simply gorgeous, warm, earthy, creamy and comforting. Superb! 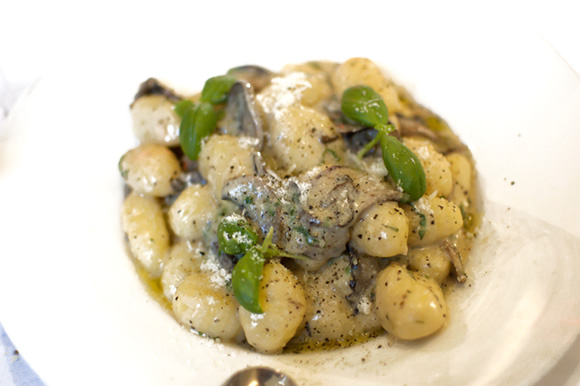 Finally the Risotto Frutti di Mare (Arborio rice cooked with the finest mixed seafood, chilli, garlic, cherry tomatoes and herbs £14.95). We both noticed how much seafood there was in there. One of my bugbears is that in British restaurants you can almost see them counting out the prawns! No fear of that here, it reminded us of the many seafood paellas we've had on our holidays. 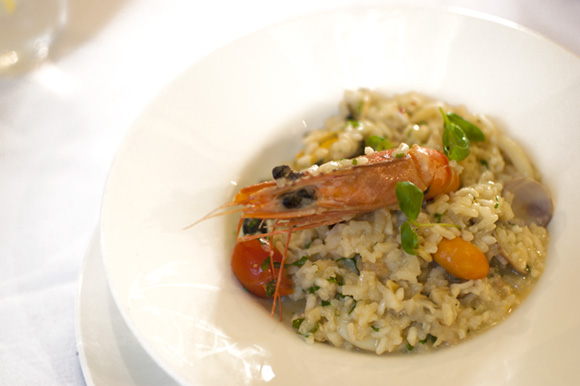 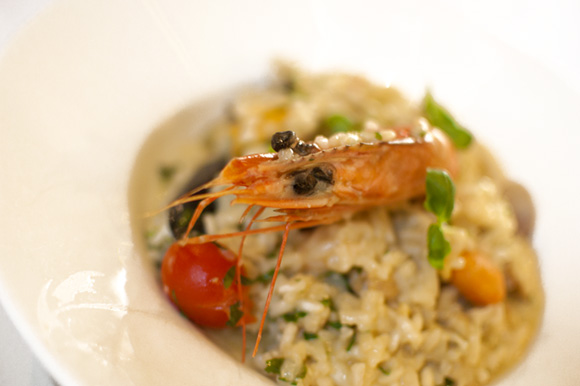 It was a good dish, but like most of the other food we had that night, it didn't totally blow us away. Perhaps we've been spoiled of late with trips abroad. But eating out a lot does change your perceptions of food as you know more of what is possible.
I noticed a 'star' from one of those dreadful 'reality' shows out of the corner of my eye, perhaps it's unkind of me to say that it's that sort of place. Footballers aside (that's a given) I could actually imagine Rosso to be a favourite of Gary Barlow, although I'm not sure why. 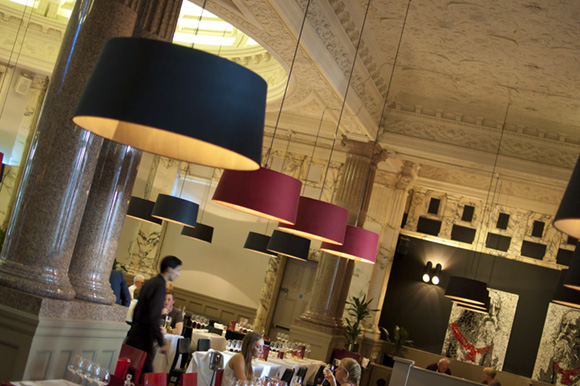 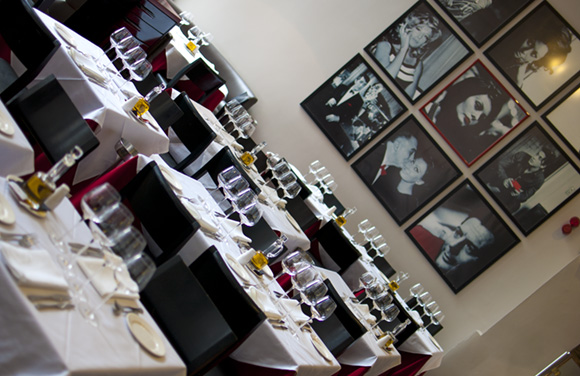 Someone over on twitter in response to my attempted 'ironic' tweet saying that I was 'mingling with the stars', replied that the 'food should be the star'. For me yes, being a 'foodie'. But this restaurant and visits to many others have lead me to one important truism; people don't go to restaurants for the food! This sounds like an oxymoron, of course good food is a very important part, but I feel people go for the experience as a whole; to be treated well and to have a good night out. As foodie' we're overly obsessed with food but most people are quite simply not so much. The food has to be good enough of course within the package of a good restaurant, and at Rosso it was. It was decent home cooked Italian, I don't think it wasn't attempting to be anything else. But it was the whole package of the beautiful interior, the theatrical service and the feeling of being in a proper grown up restaurant on a good night out in which it excels. Plus it's not overly expensive.
Desserts were a good home made tiramisu and a refeshing passionfruit sorbet (on the house) and finally two dessert wines. 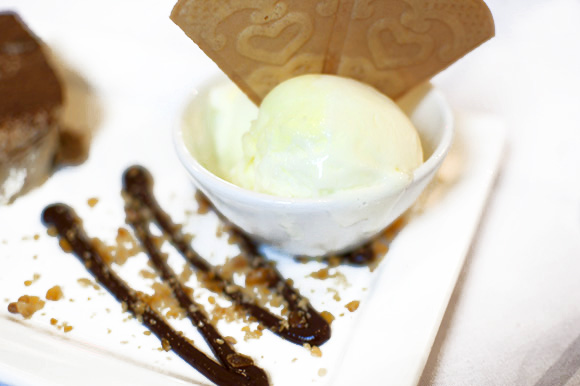 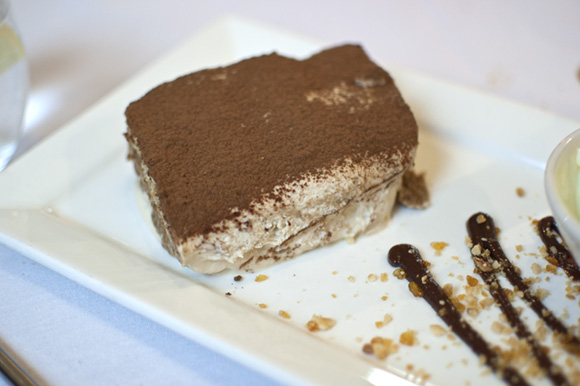 As I was trying to work out how to leave without looking guilty - getting a meal on the house still feels like we're doing a runner! The pleasant tune which I was half listening to suddenly became real, it was actually a singer walking around serenading us!

Within the confines of this restaurant it didn't look out of place. Like I said before it was like being on holiday abroad this restaurant, it was a fun night out. So what's so wrong with that? 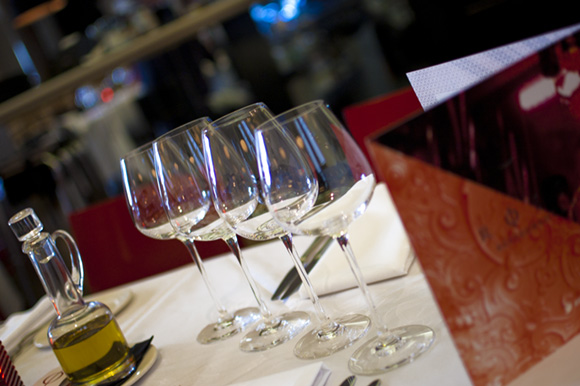 We didn't pay for this meal. Some bloggers seem to be almost apologetic about this, I've decided to brazen it out, FREE FOOD - it's a dream come true!
In truth we probably wouldn't normally go to somewhere like Rosso, it not being 'our sort of place' but we both thoroughly enjoyed it there, the food was good enough, the service was excellent and the atmosphere was lovely. It's somewhere I can imagine taking my parents or (none foodie) friends for someone's birthday.

Disclaimer: Please note all opinions are our own.
We will consider 'comped' meals like this one, but will always tell the truth how we see it anyway.
Constructive criticism is hopefully helpful to those concerned, but if there are any factual inaccuracies, we are happy to correct them.

Follow @Bacononthebeech
Posted by Bacon on the Beech at 11:04