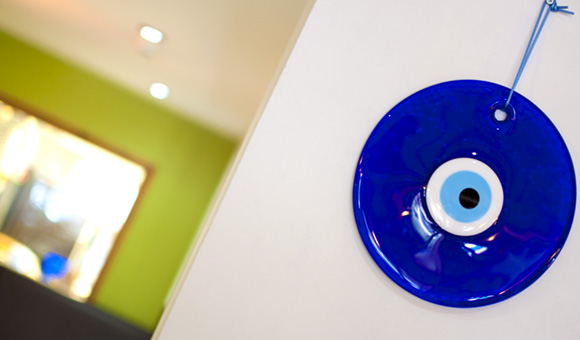 Regular readers may remember that back in January I went to newly opened Chorlton restaurant Olive & Thyme. Oh dear, It didn't go very well at all. It was my first 'bad review' and generally I like to be positive. In truth, it was a total disaster. See here if you didn't see it. My complaints mainly centred on getting charged £3.40 for half of dull old Peroni beer. I also thought that the Mixed Mezze dish I had priced at £13 was too expensive for what I received. Surprisingly, I recently got an email from them explaining that the price had been incorrect on the Peroni, and the portion size of the mezze platter was wrong too. As they had just opened up at that time and these were teething problems would we like to return? I thought it was only fair to give them another go. As I said in my original review, they've done a pretty good job on the conversion. It's a great shame that a joyrider recently drove into the terrace area rendering it out of action until next week (and at least nobody was badly hurt). 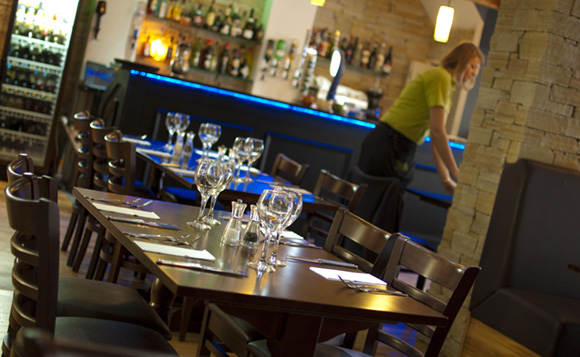 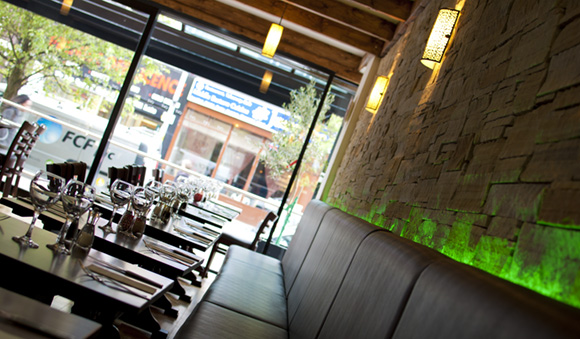 The complimentary lavas bread to start was excellent, even better than last time. Big and fluffy with a nice little pot of garlic butter and some olives. 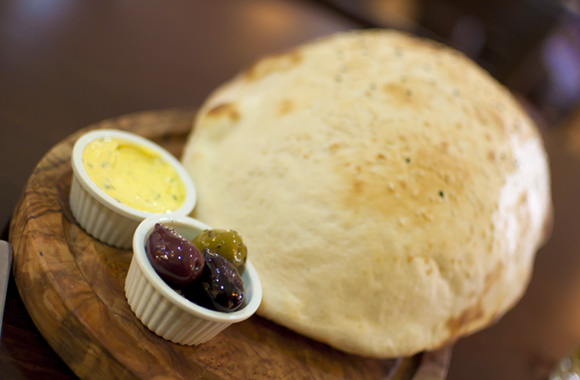 Our proper starters were the Lux Meze Platter for two (£13.90). This was a decent collection of Turkish meze washed down with a pint of Peroni which is still too expensive in my book at £4.20 a pint. Nice to see it at a fairer slightly more reasonable £2.60 for a half though.
Since we've been holidaying in Greece over the last few years, I became obsessed with Tzatziki. I had to have it on everything I ate. This was a super version, probably the best I've had in the UK, so I ordered more. We enjoyed all of the mezze, it was definitely more generous although I'm still not totally convinced that it's worth nearly £14 for this selection of simple homemade Turkish food. 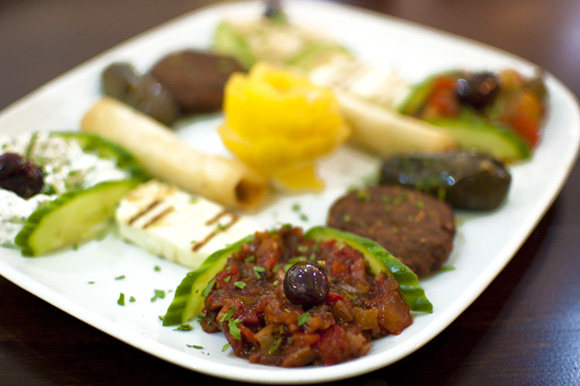 For mains we opted for the O&T’s Mixed Grill: A combination of chicken & lamb shish, minced lamb köfte, lamb chops, served with vegetables, rice & salad, £15.90). As you'd expect it being attached to the excellent Panicos kebab shop, this was a good selection of grilled meats. The lamb chop was great (better than a recent one at 3:21) the chicken wasn't bad, perhaps a little bland as it can be, but my personal favourite was the lamb shish. Considering that you can get this amount of meat next door at Panicos for about £10 less though, is it still overpriced? 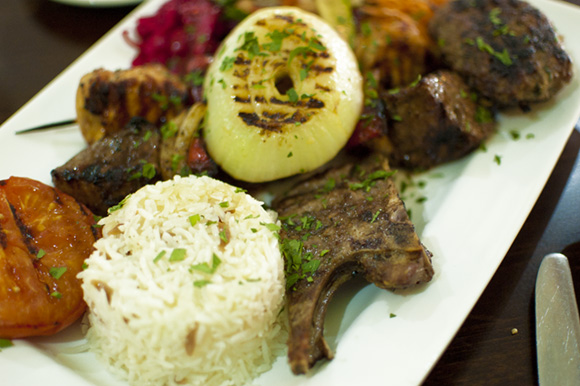 We also got a Lamb Moussaka (Oven baked layers of aubergine, carrot, courgette & potato and minced lamb in a rich creamy white sauce, topped with grated cheese, served with rice & salad, £12.90). This was like a home made dish, hearty and tasty but essentially unremarkable. This is big food, even we were starting to struggle at this point, and we're 'professionals'! 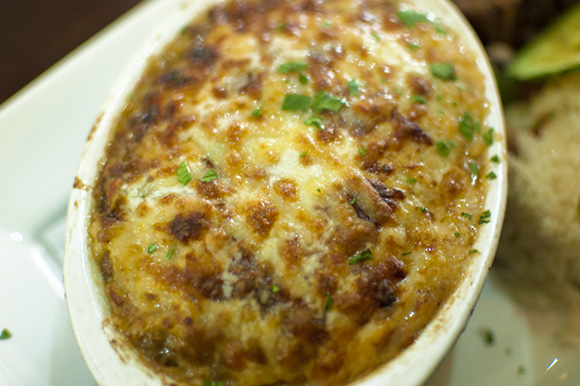 We managed to share a dessert, the Baklava was rich and sweet, but sadly the ice cream that came with it was awful, tasting of nothing but 'pink' with crunchy ice crystals all the way through it. Little touches like making sure the ice cream is a nice one (maybe even a locally made one) matter. 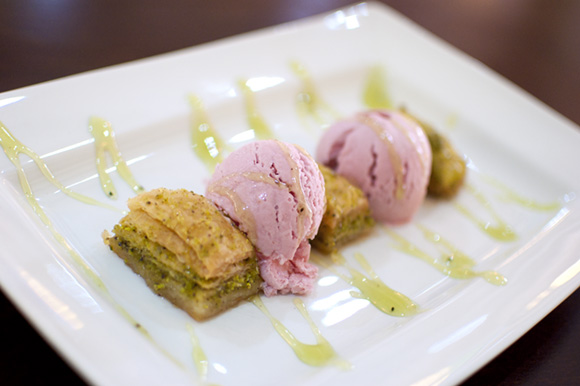 We settled our full stomachs with a Turkish Coffee, (and Turkish delights), this was enjoyable and felt authentic. 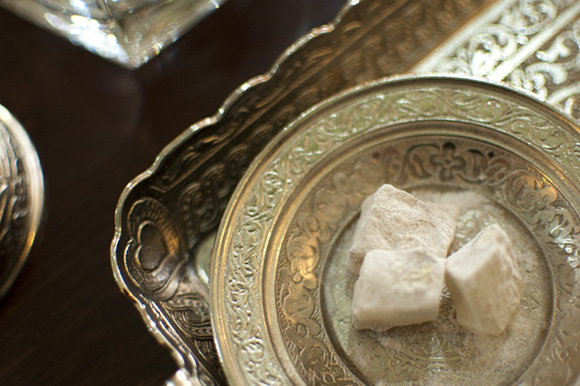 The owner came over, an amiable fellow. Explaining their concept (and their start up mistakes). Even though I felt justified in my criticisms, it brought it home to me - that these are people's livelihoods. I'm no Jay Rayner with thousands hanging on my every word, but who am I to come in and criticise a restaurant when it's just opened? (He didn't ask me this, he was way too polite and friendly!) Well in the age we live in, I figure that everyone's now a critic, and O&T have taken steps to rectify the problems they had (perhaps some of which I pointed out). I'm justifying it by saying that criticism can be helpful if it's constructive. Restaurants needs to know when something is wrong otherwise how can they improve? It is of course a learning curve. He explained that this is his first restaurant.
It's a really tough profession. Most fail. 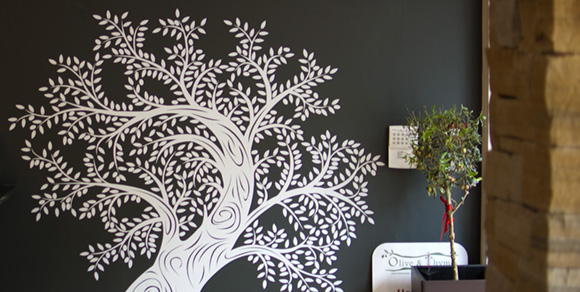 The main problem I have with Olive & Thyme though is the whole concept. The 'mediterranean' theme doesn't work for me. I know what they're trying to do; when you get a big group in and people want different things it works for them. But I feel that many people these days want 'authenticity' whatever that is. If they want to eat out at a Turkish restaurant they want Turkish, if they want proper Italian, they'll go to one. There's just so much choice now more than ever.
We personally always avoid restaurants that deal in more than one cuisine, because the impression I always get is that they'll do them both badly. By trying to appeal to everyone, you appeal to fewer as your 'brand' appears to be diluted.
He is however proud of their risottos and their signature dishes the Lemon & thyme chicken (I rarely order chicken out) and the Sea Bass (normally sourced locally from Out of the Blue, a mark of quality). We didn't taste these so I can't comment. But my advice (should it be asked for) would be to remove the Mediterranean theme and do Turkish proper. I've never been to Turkey, but imagine that there are many more dishes you can get over there that you don't normally get over here. I think people want that. I would at least ditch the pizzas (they looked average and Croma are the market leader anyway round here anyway).
So I think they should concentrate on the things they do best. Our favourite parts of the meal were the most authentically Turkish, the bread at the beginning and the coffee at the end. 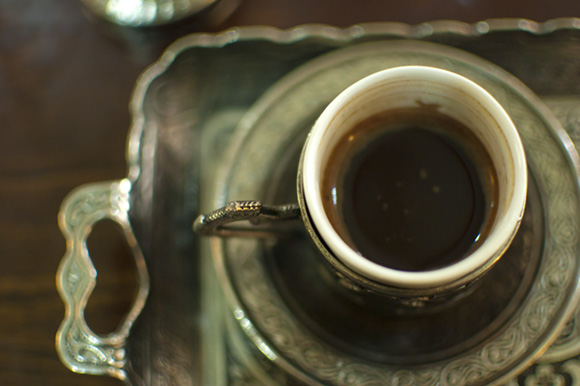 In conclusion, a much more successful visit to O&T this one. The food was pretty good of its type. The pricing needs attention still though I think, perhaps introduce some cheaper set menus and early bird specials - the Chorlton food market I believe is predominantly driven by cost. People are counting their pennies and it's highly competitive. But lower the prices and you'll likely get more customers in, simple as that. Anyway I wish them luck, they're making a go of it, and I'm sure they'll improve even more as time goes on.

Follow @Bacononthebeech
Posted by Bacon on the Beech at 14:07