We always really liked Coriander Indian restaurant in Chorlton, we were fairly regular when it first opened several years ago. But the problem for us was that it wasn't really in Chorlton. It was up the road near to Southern Cemetery, (famously featured in The Smiths song Cemetery Gates). However, this was too far for us to walk to when there are four Indian restaurants right on our doorstep. If we were driving, we would probably go the extra mile up to Didsbury to The Great Kathmandu on Burton Road. But the brand new Coriander opened up this week right next to three other Indian restaurants on Barlow Moor Road. We went along to find out what it was like. 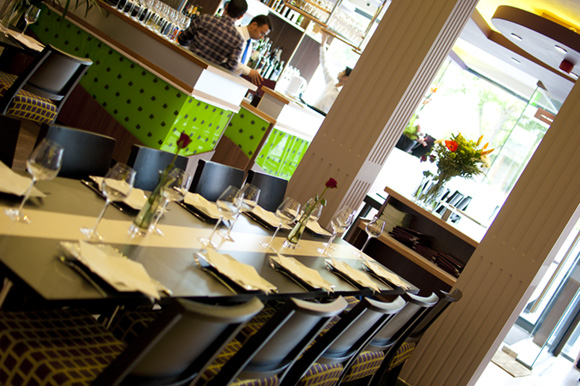 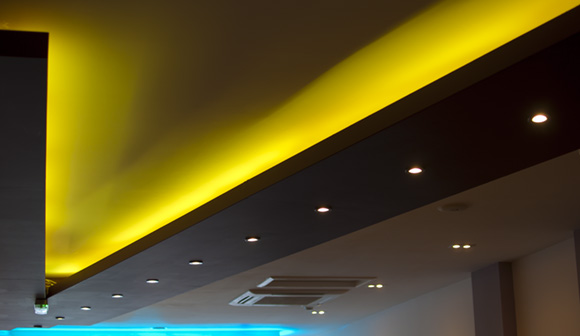 It's smart and modern inside with clean cut lines. They've avoided the overly fancy 'bling' of other new Indian restaurants, and it's certainly an improvement on the old Coriander which is still open by the way, much to my surprise.
The poppadoms arrived sharply, they were crisp and fresh and the dips good, slightly different from the usual. We especially liked the spicy tomato one. 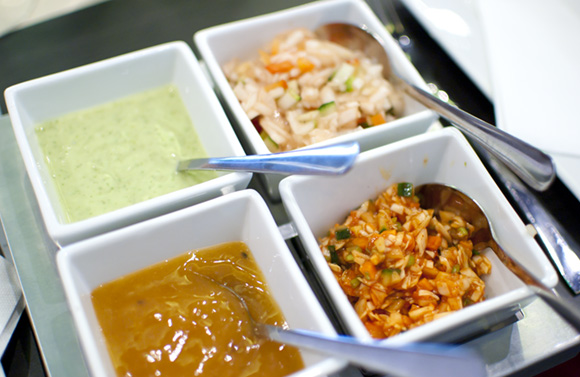 It was starting to get busy now, service was good and friendly, although they did struggle at times, it was a touch slow, but we were in no rush and to be fair they've only just opened.
To start with Mrs Bacon and I shared a Mixed Grill Platter (chicken tikka, sheikh kebab, chicken patties & a traditional onion bhaji £7.90, for two). This was decent, the bhajis especially crisp and crunchy. 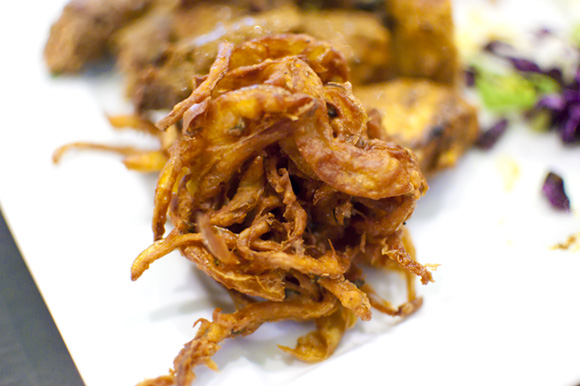 Our friend Dr Gambas really enjoyed her pumpkin puri as well.
The menu is different from the usual run of the mill curry houses, and a lot better for it. They also promote 'high quality ingredients', no MSG and colouring, another plus point in it's favour. One thing I have confirmed with the restaurant manager Matin, is that all their meat is sourced as locally as possible; the lamb and chicken from local farms and the beef from nearby or Scotland. This is a real positive point especially in light of food scandals and quite unusual I believe for an Indian restaurant.
So anyway, after a bit of a wait our mains finally arrived.
I got a Chilli Garlic Masala (lots of garlic, ginger and chilli, £7.50). This was excellent, hot and spicy and it tasted 'clean'; not too much ghee which takes me several hours to digest (it does make a difference to me as I often cannot sleep well after a curry - no such problem here). 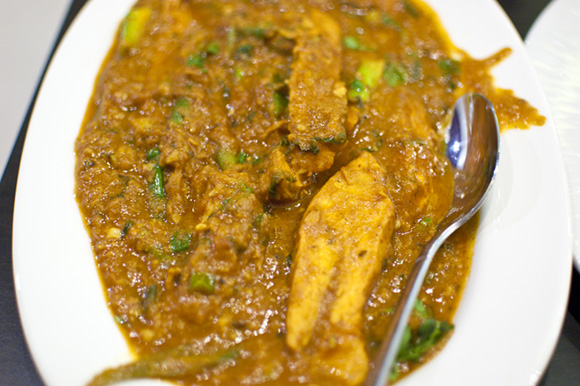 The garlic nan was excellent and crispy, although as usual there was NOT ENOUGH GARLIC on it. I'm guessing some people complain if it's too strong. In my book, they shouldn't be ordering garlic bread/nan if that's the case.
Mrs B's Urban Style Chicken (Chicken, chickpeas, peppers, onion, garlic & coriander
£7.20) was pretty good, she really enjoyed it, but I preferred my dish. 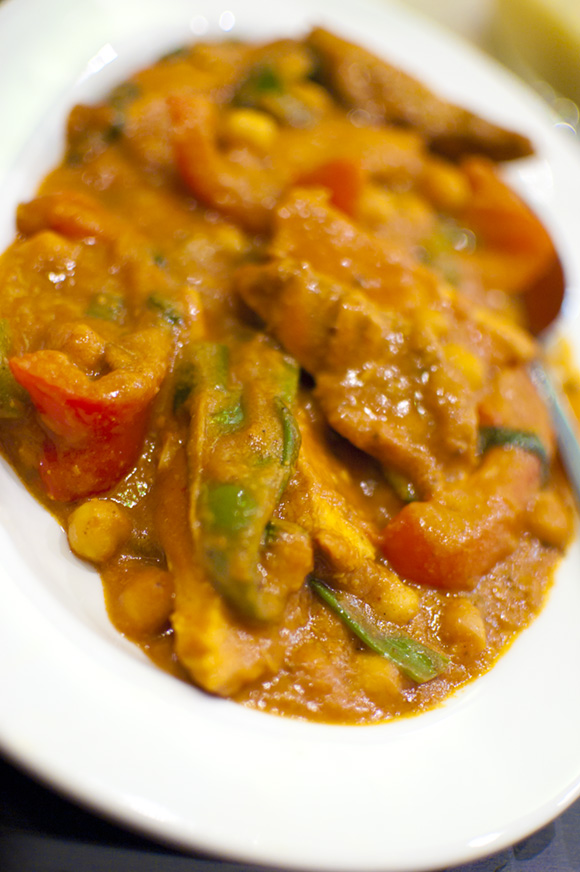 Dr Gambas's Royal King Prawn (King Prawns cooked with mushrooms & coconut milk £12.90) was delicious, creamy and comforting. You could detect the lemongrass which you don't really see that often in Indian restaurants. Coriander bill themselves as 'authentic Bengali dining', so it is a step above the usual fare. I also had a taste of the Biryani, which was also well-tasty. 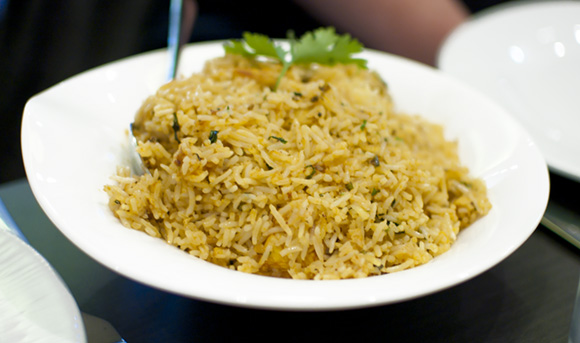 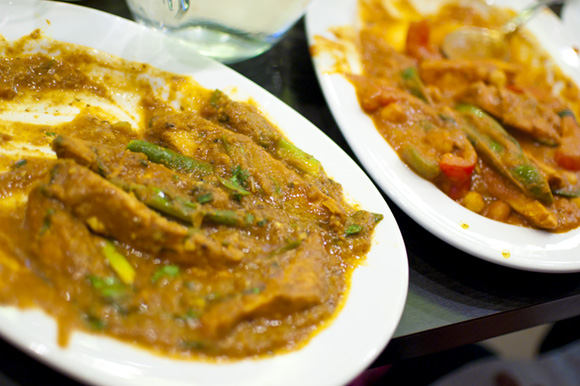 We asked for some water, but I had to send it back a few times as it tasted plastic-y, they handled it very well though, explaining their supply had only just been fitted.
We also had to ask for the bill a few times, as I mentioned they were surprisingly busy considering they've only just opened.
However, all in all, we really liked the new branch of Coriander, it's definitely the best Indian out of the four of its closest neighbours if not in Chorlton. So it's returned again to being our personal choice local Indian restaurant. And as it is now only 5 minutes from Bacon towers, we will I'm sure be regulars once more. 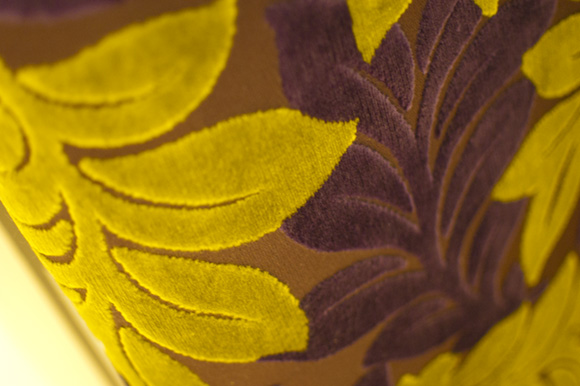 Sadly since this review last year, the food at Coriander has declined in quality.
To see a more updated review click here

Follow @Bacononthebeech
Posted by Bacon on the Beech at 17:38