A funny thing happened on the way to Akelaŕe, the restaurant just outside San Sebastian. That's the thing when you're travelling, all your best laid plans can be changed in a instant by random happenings we call real life. This can be hilarious, frustrating and surprising, or all three as it was on this occasion. We were on our way, and due to be early for our reservation. As the restaurant is on a hill overlooking the sea why don't we try and arrive even earlier, since there will be more light and I can wander about taking photos? I felt very smug with myself, sat in a taxi looking forward to three Michelin star food yet again! Then the car came to a grinding halt. We sat there and we sat there. No movement up ahead. The taxi driver was telling us something in Spanish. I understood about a quarter of it. (I'm only fluent in food!) Something was going on further up the road. We carried on at a snails pace, shuddering to a halt every 3 minutes. Then we saw them; a huge group of walkers in the road. We were way back. The taxi driver asked if we could go to another restaurant. No we could not! We'd booked this especially months ago! There was only one road to the restaurant on the long and winding coast road, and this was it!

We managed to piece together that these were not just walkers; these were pilgrims! Doing a walk for Jesus! Do they not know that we have Michelin star food to eat? After about half an hour of this slow stop-start, we zoomed past them and the slow moving van at the head of the group. Yes! We were on our way now! Only to come to a sudden shuddering halt. The traffic police had somehow mistimed our over-taking manoeuvre, and all 100 Christian soldiers slowly walked past us peering into our taxi with mild interest. This was getting ridiculous now, we were over half an hour late. The taxi driver suggested we walk. How far? 20 minutes he guessed. Seemed like the only sensible  solution, we got out of the car. The things we'll do to get a great meal! So there we were walking with the pilgrims. At this point I should say that I am 6 foot 5 inches and Mrs B is barely 5 feet tall. We make a daft pairing at the best of times. But when we are dressed for a top class restaurant me in a suit jacket and linen trousers, her in bright blue tights and kitten heels; we make an even more unusual sight. Especially when every one else is dressed like ramblers. We made short work of the stragglers. We asked one of them in Spanish, 'how far Akelaŕe?' Half an hours walk she reckoned! Mrs Bacon's little legs were going like billy-whizz now! Fine food was our promised land, so we were now speeding along like those ridiculous Olympic walkers. We got a few funny looks I can tell you, whilst Mrs B was trying to explain as we overtook, "We just have to get to this restaurant! " We passed through those pilgrims like a knife through butter and soon were at the front of the field. Thank god she wore kitten heels!
There it was, that must be it over there! A modern building overlooking the road, alas it was a false hope, just some random bar! Then we passed the truck at the front playing Richard Clayderman over tinny speakers. There was an old man ahead with a kind face and a staff. Yes Akelaŕe is just up there he pointed! Finally we'd reached the promised land, it was miraculous; there it was a sign! He pointed and smiled! We walked down the road towards the sea, yes this was it! I looked back. Strangely he had disappeared, or was he an apparition? Perhaps he was the Patron Saint of Michelin Starred Diners? 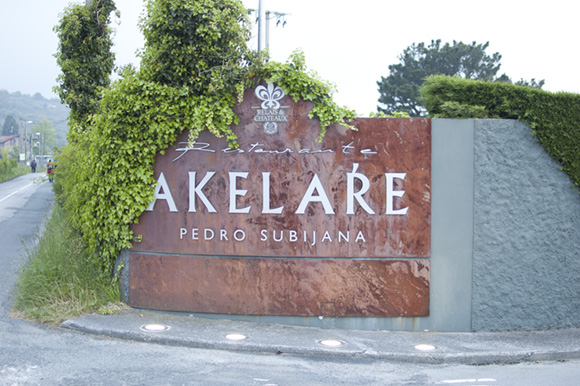 We walked into the restaurant flustered, explaining we'd walked half the way, and sorry we were late, yes it's ok they said, it happens on this day every year! They could have pre-warned us! We got a table overlooking the sea, unfortunately it was a little cloudy and dusk had started. 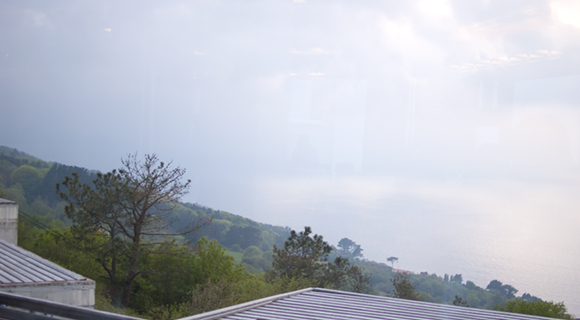 We both decided to go for the Aranori taster menu. A lot of people go for two tasting menus and mix and match, but we knew that this wouldn't work for us, and we both fancied most of the dishes on this one. Mainly we know that we couldn't share stuff like foie without fighting over it!
First some appetisers: Sea Garden: Oyster leaf, Mussel with "Shell" Sea Urchins Sponge, "Beach Pebbles" (Shallot and corn, Codium Seaweed Coral, Goose Barnacles tasting tempura.) All absolutely delightful. Nothing is quite at it seems. We'd previously had the Oyster leaf at L'Enclume. You put it in your mouth and wait, slowly the exquisite taste comes to you. 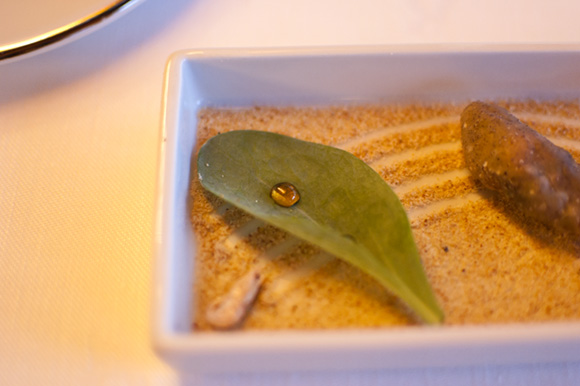 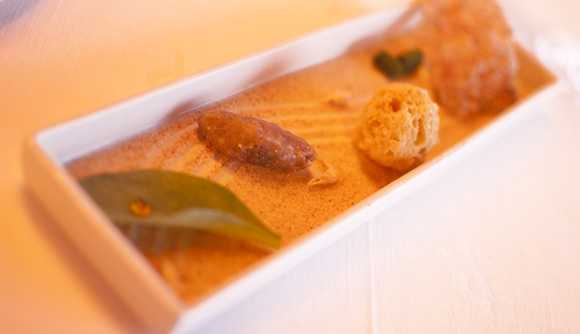 Strangely I could not find any Spanish white on the menu, so got a bottle of Marlborough Sauvignon Blanc which went well with most of the food. The wine list was more expensive than the previous evening, our bottle cost us €40.
Onto the menu proper; Prawns and French Beans cooked in “Orujo” Fire.
The spectacle of having this flambéed on your table was entertaining, but in the end you're just left with some prawns. Don't get me wrong, some of the very finest prawns you're ever likely to eat, with a delectable smokiness, but I'd be quite hard to impress tonight after last nights 'Best Meal we ever Ate' at Azuemndi Bilbao. We both really enjoyed sucking all the gorgeous juices out of the prawn heads. 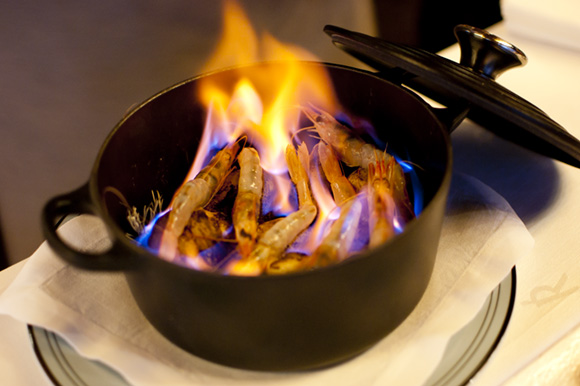 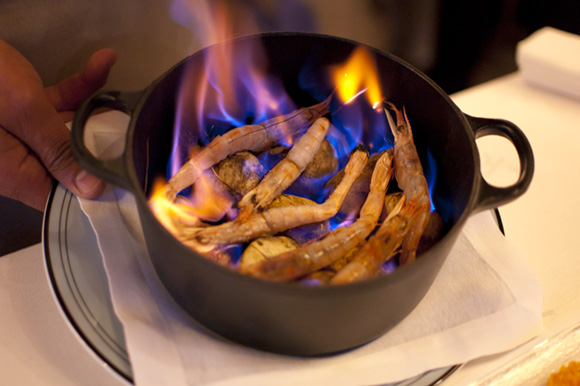 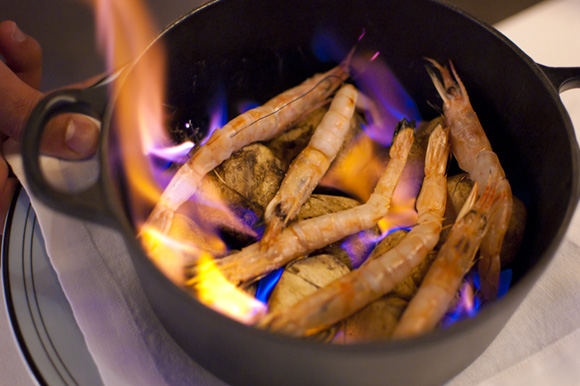 Next Pasta, Piquillo and Iberico Carpaccio, Mushrooms and Parmesan. This was interesting as what appeared to be, the 'Carpaccio' was nothing of the sort, it was actually made of vegetable but tasted of meat. This was good, but take away the 'deception', and it was just a pleasant dish. Not blowing me away so far. 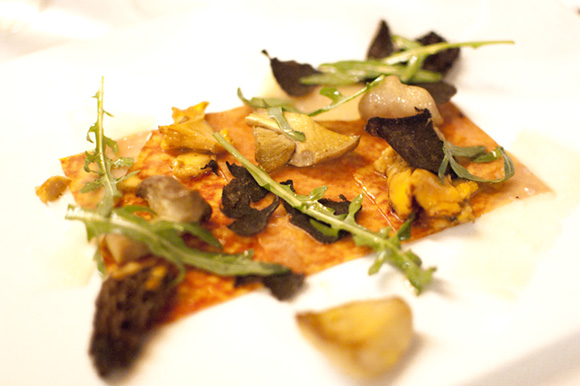 Sautéed Fresh Foie Gras with “Salt Flakes and Grain Pepper was more like it. Mrs B decided it was her favourite dish of the year! It truly was stunning, one of the most delectable foie dishes we've eaten, and we've had a lot. The 'salt & pepper' were not of course, another amusing trick. The salt was sugar crystals and the black pepper was black fried rice. But this dish really delivered. 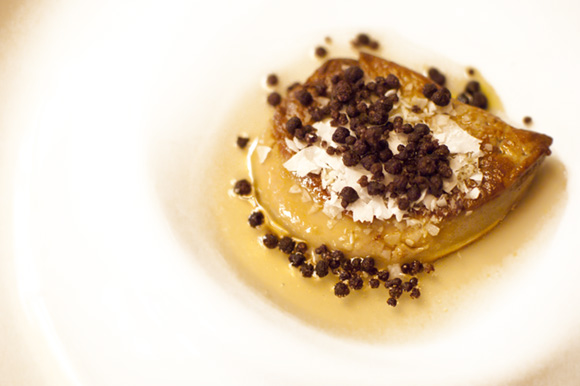 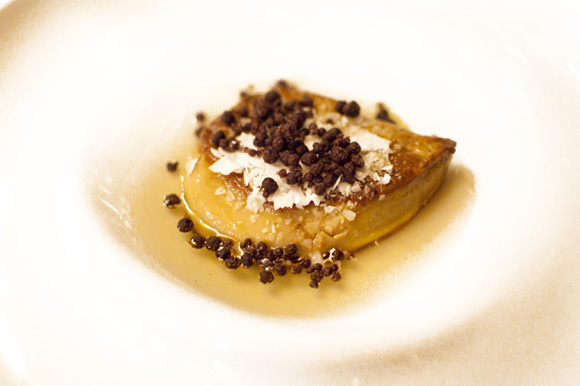 The restaurant was very busy now. Service was excellent. And the bread was divine. I asked for some butter. We got a huge plate with meticulously sculpted carved butter. I couldn't stop eating the stuff. I think it was the fast walking, I needed the carbs! The next course was superb as well, Turbot with its “Fake Kokotxa”. The thin crispy fish skin was gorgeous. Kokotxa is from the chin of the fish, but Turbot doesn't have this, so they recreated it from kudzu a Japanese plant. More playful deception! 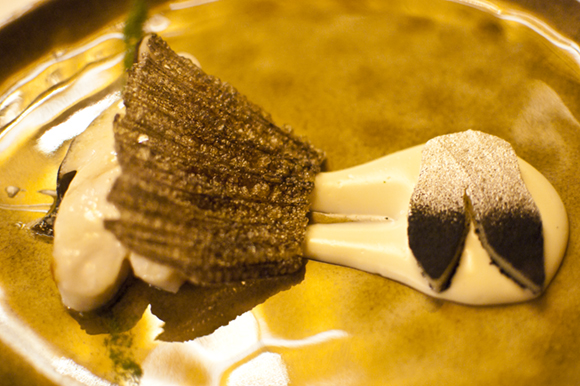 Next Grouper with Fresh Asparagus which was impressive. 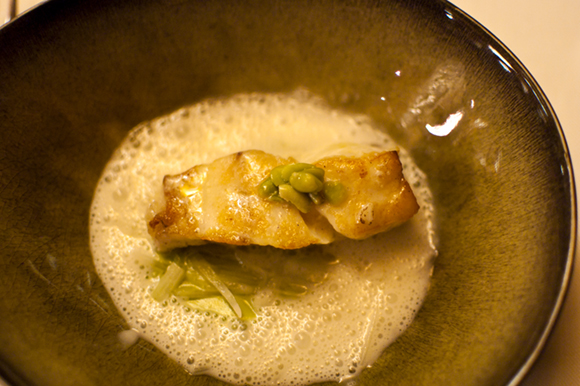 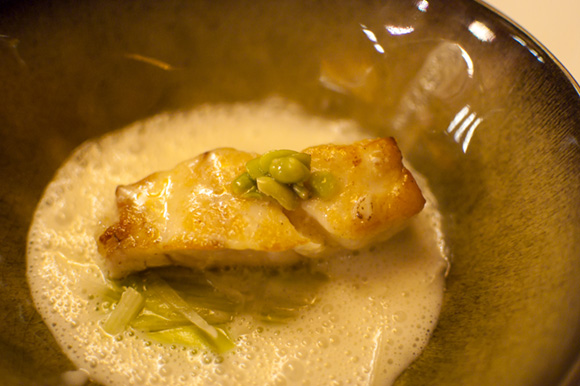 My favourite though was the Roasted baby Pig with Tomato “Bolao” and Iberic’s emulsion. I'd not eaten pork this good since, well last night! We liked the little hollow crisp in the form of a piglet! 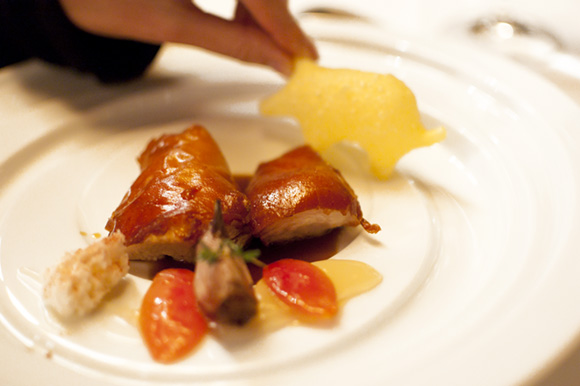 Desserts were superb. 'Xaxu' and foaming Coconut Ice Cream was we both agreed our favourite pudding in some time. It reminded us of the Frozen Puffed up Cheesecake at El Bulli*. Indeed the dish looks very similar to another El Bulli favourite 'Coconut sponge cake' that I saw on the bloggers The Critical Couple's review from 2010, you can see here.
It was so good like the very first taste of coconut, and so light and fluffy but slightly crunchy; like aerated foam ice-cream, a real three star dish. 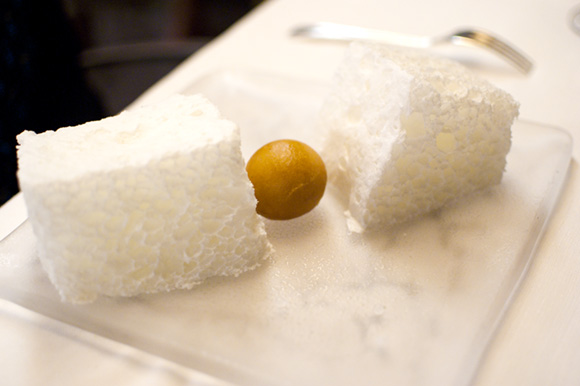 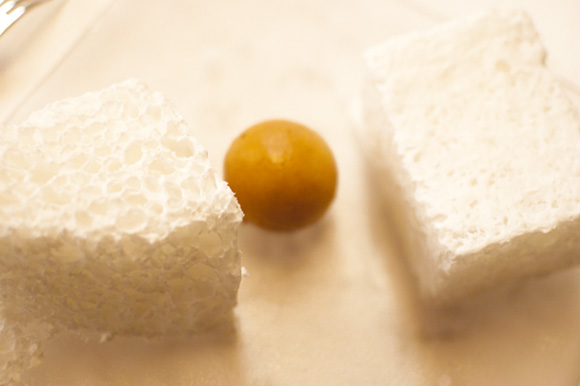 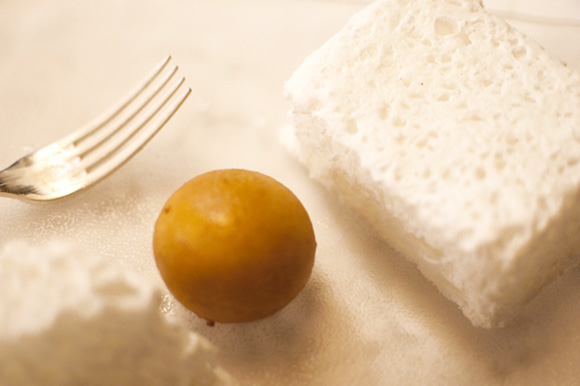 We also liked the Another Apple Tart. Our waiter hadn't explained properly that you can eat the paper as well, so we proceeded to take it off. They corrected us (in the nicest way.) It was like the best mille-feuille you've ever eaten but with apple. 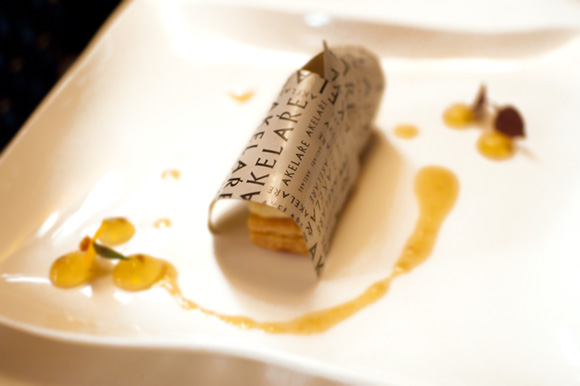 So to conclude. An excellent meal at Akelaŕe, I wish we'd have eaten here first and Azurmendi second because the latter is on a different level in my opinion. The food and experience was a very good one at Akelaŕe and probably still rates as the second best meal of the year so far.
So there it was; our six Michelin star weekend, what an amazing experience!
The next day we were sat at the airport eating the best airport food we've ever eaten, and we saw on a TV screen footage of the pilgrims walking from San Sebastian to the nearby coastal village. They walked all through the night.
We searched in vain for an odd incongruous couple zipping though the crowd, him like a bald headed circus giant but in a smart suit jacket and her, tiny wearing a posh frock, indigo blue tights and kitten heels.