We were never meant to be eating at The Square. It all started when I was organising a trip to San Sebastian in May. I couldn't decide on which restaurant I wanted to eat at. Aklerarre or Arzak? I decided on Akelarre, but as Arzak were opening up a London restaurant, I thought we could go there instead of the one in the Basque country. It was opening in springtime, I was excited, so booked a table two weeks in. Then the reviews started coming in for Ametsa with Arzak Instruction.
They were mainly awful. Clearly the translation from Basque to English wasn't working. We don't eat at this level that often, so £100 per head was too much of a gamble for me.
But we still had the train tickets, so I cancelled our lunch booking and started looking for a replacement. I wanted a high end Michelin starred restaurant with a taster menu. Obviously I was spoilt for choice in London. I ended up whittling them down though. Dabbous was fully booked for the rest of the year (I managed to get lunch booking in November though!) Hedone is in Chiswick, which is too far to travel as we were only in London for the afternoon. So it was down to The Ledbury or The Square. There wasn't much between them but I went for The Square after some extra advice from Twitter. It was a 'safe' bet. 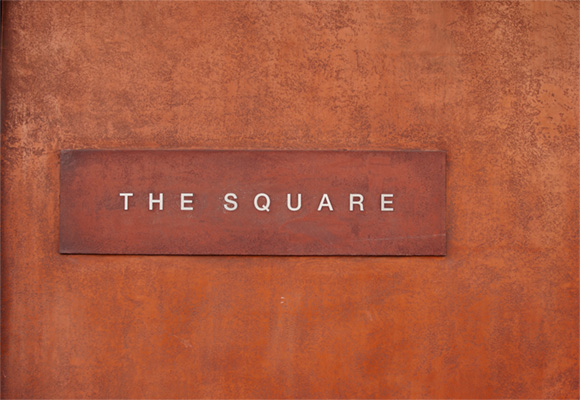 When you enter a Michelin Star restaurant  like The Square totally sober (not something I do a lot of of be honest), it can be a little intimidating. There's is like a hushed reverence. When you have working class roots, there's something inside your head that screams, 'this place isn't for the likes of you!' (I can't be working class now though, I eat falafel for a start). 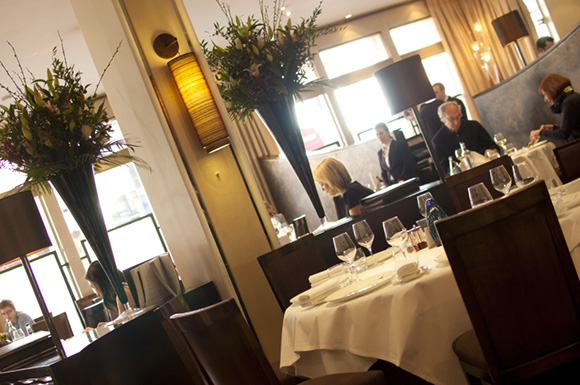 Thankfully that passes, and I start getting into it. The first thing you notice when you arrive at a restaurant like The Square is the service. It's impeccable, earnest and totally efficient. Mrs Bacon thought it was like a ballet watching two waiters avoid each other with the grace of dancers. I think it's like a quiet well oiled machine. I ordered a beer, I decided to avoid the wine to save money and to drink a whole bottle at lunchtime would actually not make the experience better for me. Plus I couldn't quite bring myself to pay £10 for a glass of red. 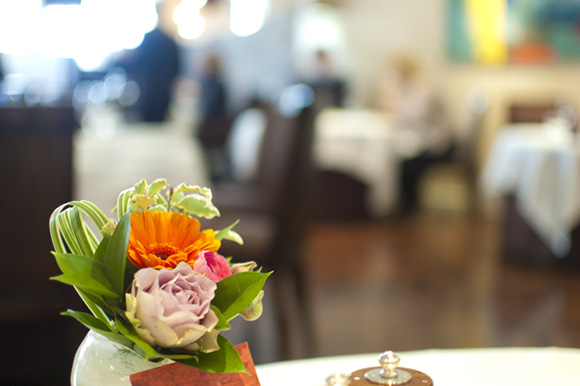 Without further a do, we go straight into course one of the 9 course taster.
1. Rillette of Smoked Mackerel with Horseradish and a Smoked Eel Soldier. A perfect starter, the crispy Eel toast and rillette was so flavourful. We looked at each other knowingly. We knew we were at the beginning of a wonderful very expensive indulgence. 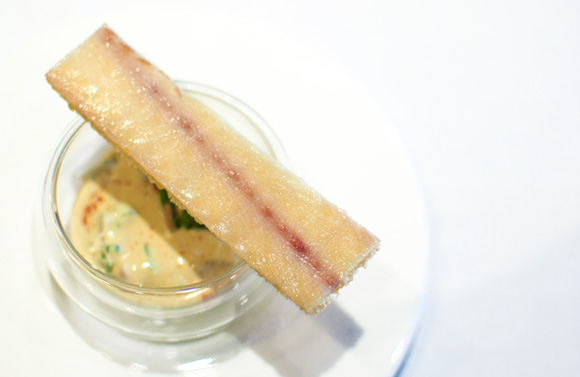 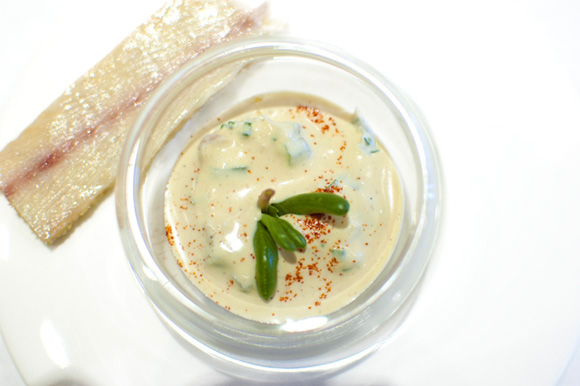 2. A Tasting of Spring. This was unbelievably divine. There were three elements, an amazingly fine veal tartare with quails egg, a rich green jelly with truffle and a jug of wild garlic foamy liquid which was poured into the jelly pot, plus a crisp parmesan 'frazzle'. 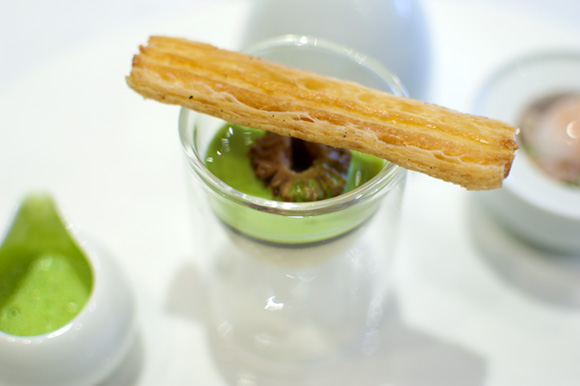 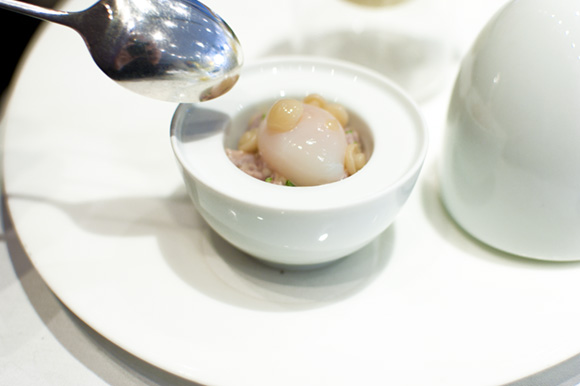 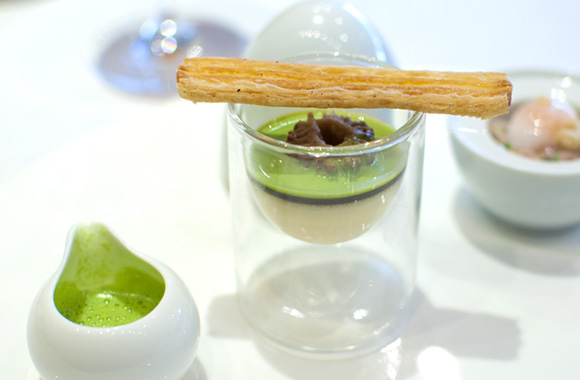 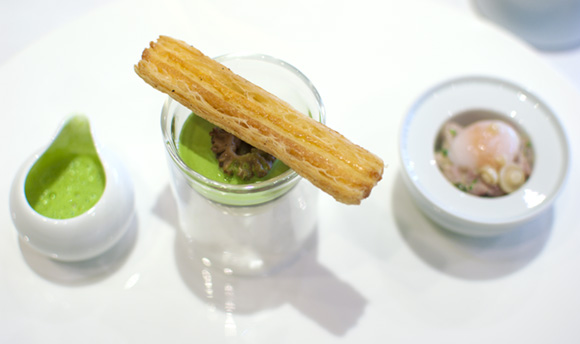 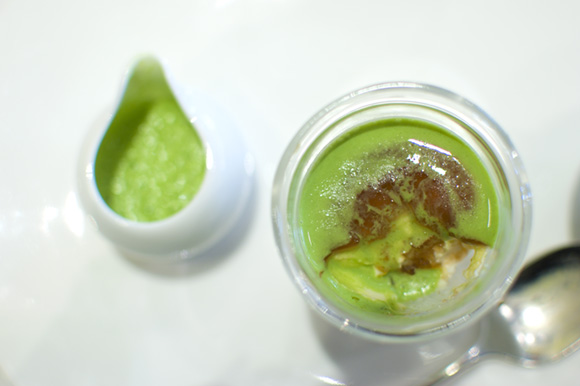 A lyric from the band James came to Mrs Bacon "If I hadn’t seen such riches, I could live with being poor." I should tell you at this point that my wife is always reminding me that her job pays her "minimum wage" so I guess it's apt. Shame we have such expensive tastes. I was in my gollum faze, where in my head I whisper, "Mine, all mine".
3. Salad of Rolled Guinea Fowl with White Asparagus, Truffle Cream and Pea Shoots
This does nothing for me this dish to be honest. I don't understand the appeal of it. Just give me more of that delicious stuff! The fault probably lies with me and my lack of knowledge, but it was just a bit dull, perhaps subtle is a better word. Naturally, every course on a taster menu can't be the same note. Mrs Bacon thought it was fresh healthy and tasty. 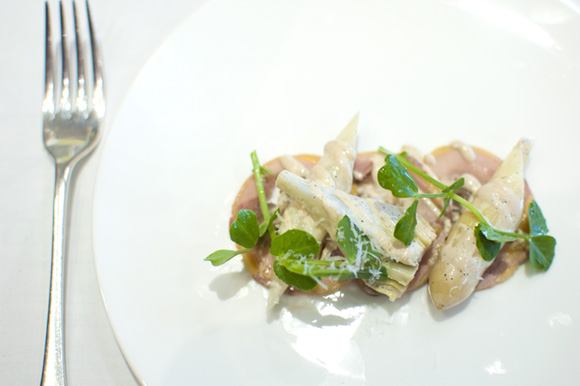 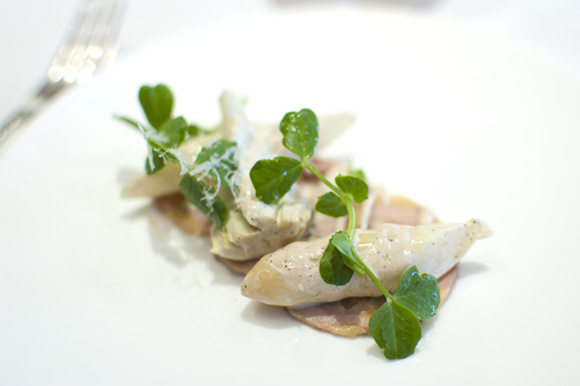 4. Sauté of Langoustine Tails with Parmesan Gnocchi and an Emulsion of Potato and Truffle. Simply stunning. This was really heavenly. I think I had an out of body experience as I don't remember eating it at all. Mrs Bacon decided she felt sorry for anyone who'd never eaten it. I just felt lucky to be alive and eating it. 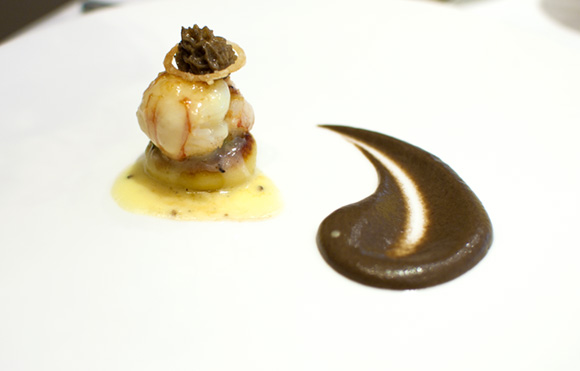 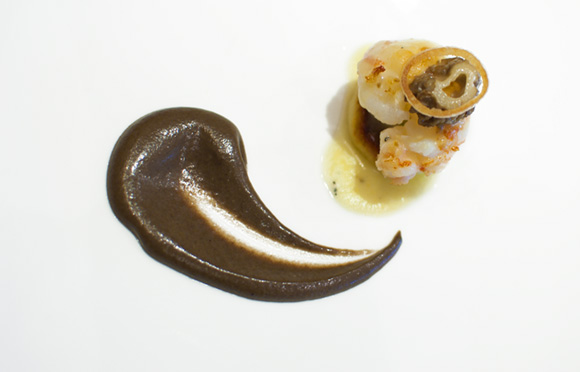 5. Lasagne of Dorset Crab with a Cappuccino of Shellfish and Champagne Foam. This was not on the taster, but I was given the heads up by fellow blogger FTTBYD. Thanks to him! We looked at each other incredulously and giggled. 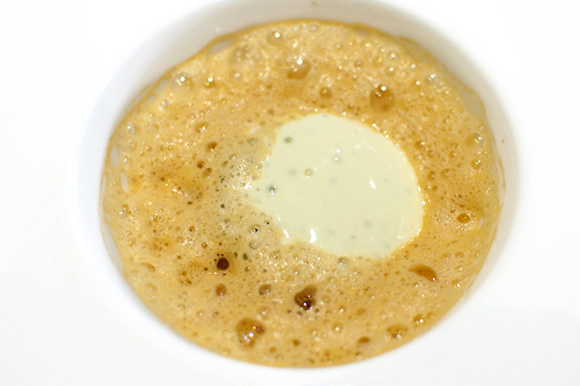 6. We were supposed to have a Turbot dish next. I decided to be clever and tried my luck changing it to a Roulade of Pig's Trotter I'd seen on the a la carte. What's the worst that can happen I said? They can only say no. Well the worst did happen. The waiter had misunderstood and brought the Pot au Feu of Pigeon from Bresse with Asparagus, Morels, Barley and Hazelnut Dumplings. I could have done a Michael Winner, but I just don't have it in me. I quite liked it. 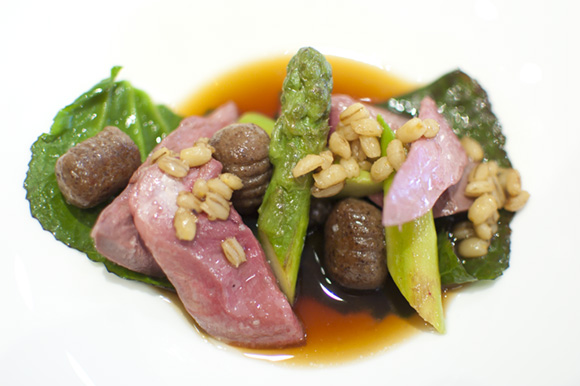 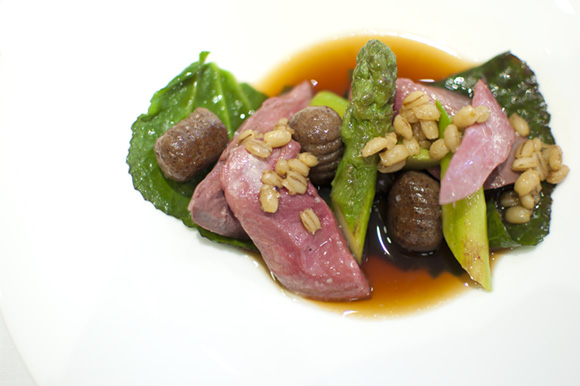 My wife was not happy though. Again perhaps this shows my ignorance, but when we get any 'unusual' meat like pigeon, rabbit, or anything 'gamey' more often than not, I'm glad I tried it, but I rarely feel that I prefer it to a 'mainstream' meat like lamb or beef. The pigeon was good though with a pleasing texture, and the Hazelnut Dumplings were rich and flavourful.
7. Tasting of Windrush Valley. A lovely dense goats cheese, we both enjoyed this dish, it was light and fresh. 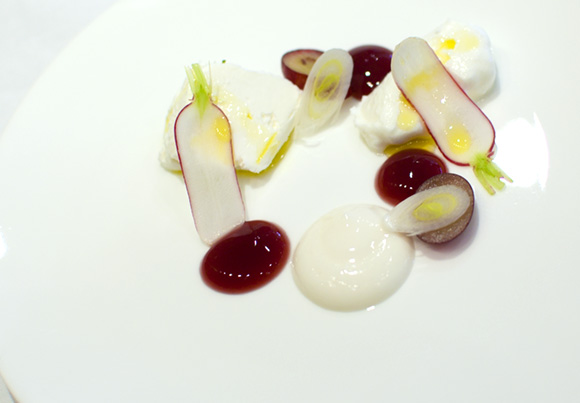 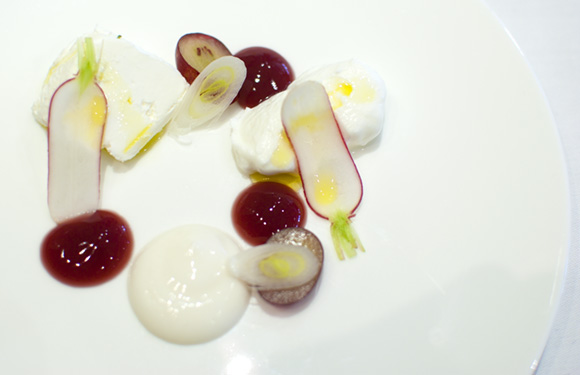 8. Brillat-Savarin Cheesecake with Passionfruit Glaze and Yoghurt Ice Cream. Mrs Bacon declared, "Well we're not going to get a better dessert this year." 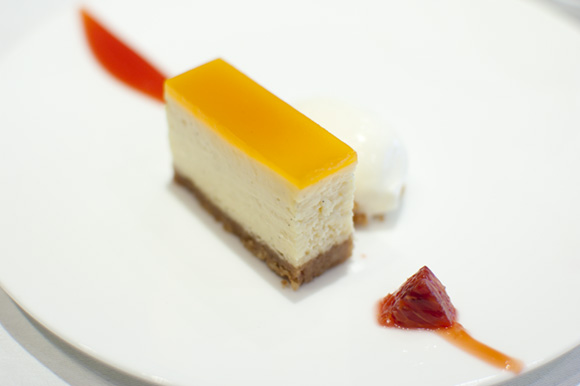 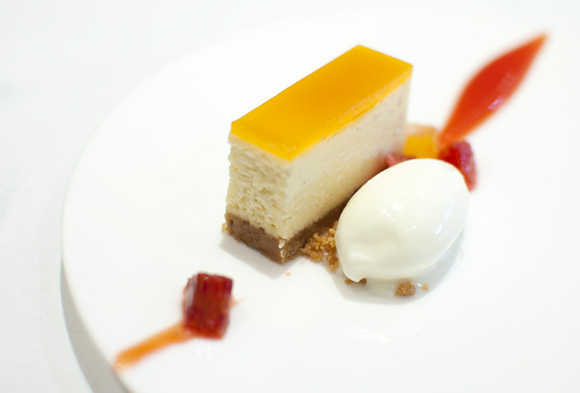 9 Banana Soufflé with Milk and Granola Ice Cream. This was probably the best Soufflé  I've ever had (including La Gavroche), it was so light and fluffy with the melting gooey ice-cream dipped in the middle. 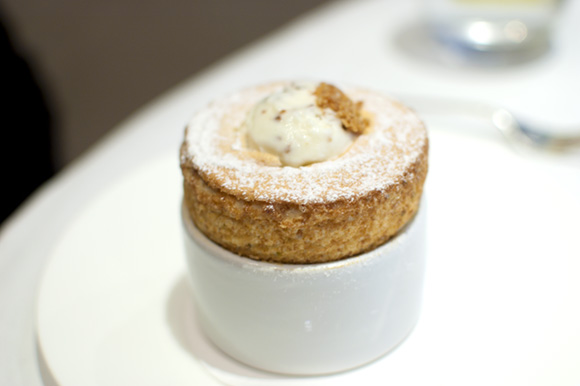 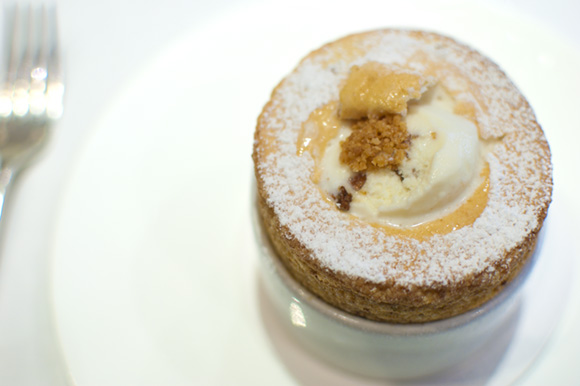 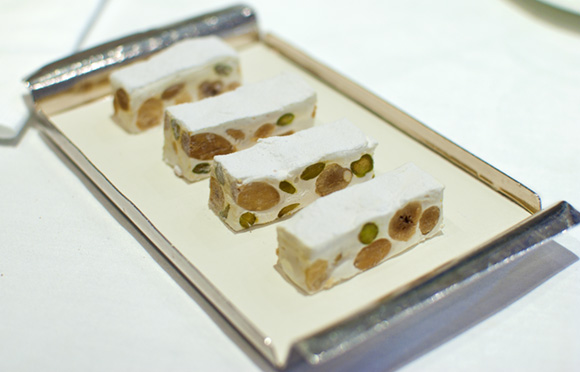 The bill came to (takes sharp intake of breath) £261 including 4 drinks. (One soft drink three beers at £5 each!) They also added on 12.5% tip. I'd prefer it if they didn't do this (possibly as at nearly £30 for the tip alone, maybe I wouldn't have tipped quite as much as that!) Also £2 for charity. Of course you could ask for it to be removed, but who is going to do that? To be honest I was a little annoyed and could imagine doing a Larry David on that one, as I think I should decide myself if and when I give to charity, but perhaps I'm just being petty. What's £2 when I've just spent £261 on lunch! My mother should never know, she'd have a heart attack!
We really enjoyed our lunch at The Square, the food is superlative and service is impeccable. With a taster menu you rarely love absolutely everything on there, but 3 dishes for us really stood out as being amongst the best food we've had; A Tasting of Spring, Sauté of Langoustine Tails and Lasagne of Dorset Crab.
There maybe more 'exciting' fashionable options in London right now, but for exquisite food and excellent service you can't go wrong with The Square. 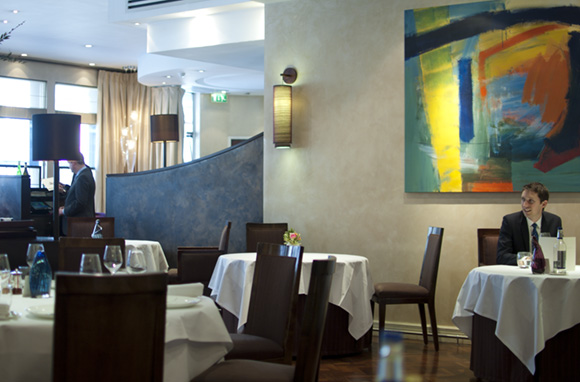 Price: To be honest, I had misgivings, it's a lot of money. Especially for us.
It's about a months worth of 'big shops' at Aldi!
Service: Stunning. You won't get better.
Food: It's 2 star. It's going to be fantastic, and it was!
Star dishes: A Tasting of Spring, Sauté of Langoustine Tails and Lasagne of Dorset Crab.
Score: 7.5/10.


Lyrics from 'Sit Down' by James.

Follow @Bacononthebeech
Posted by Bacon on the Beech at 09:58