This is the blog post I had no intention of writing. You see when the offer of a complimentary tasting of all the burgers Hard Rock Café had to offer, I thought that it wasn't really for me. We don't really 'do' chain restaurants, not because we are snobs about it (as I will eat pretty much everything), but they just don't appeal to us. Consequently, I've never been to Nandos, or Jamies, and I've not 'hit' The Hut since the 80's. I will admit to an occasional McDonalds milkshake when I am nursing a hangover though.
But three things changed my mind.
Firstly Mrs Bacon was mithering* me to go, "How bad can it be?" She said, it's free! "Lets just go and see for ourselves!"
Secondly, fellow local blogger Foodgeek had gone, and thought it was actually pretty good.
Thirdly, I enjoyed London food blogger, Cheese & Biscuits '10 Worst London Restaurants in London' article and Hard Rock Café was at Number 2!
Strangely, like a moth to a flame this made me actually want to go to see for myself! Surely I should have an open mind to see what it was like? Also, the Manchester branch were apparently proud of their burgers, and I am supposed to be eating my way through all of the burgers in town. So it was my duty to taste them, for research purposes you understand. The things I do for you dear reader!
So we went along to have a look. 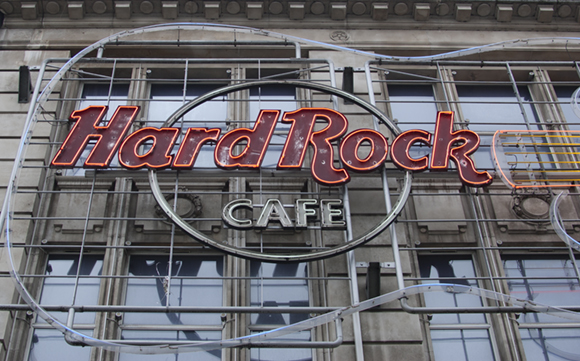 As we arrived, I thought I'd made a terrible error. As I walked in I could tell it wasn't the sort of place I normally like in any way at all. It reminded me of The Trafford Centre, and I hate it there. A corporate version of what 'rock and roll' is; plastic and inauthentic, like the Ben Elton script for "We will Rock you!" There were TV screens everywhere and loud music playing, you know how I feel about that. See here if you don't. 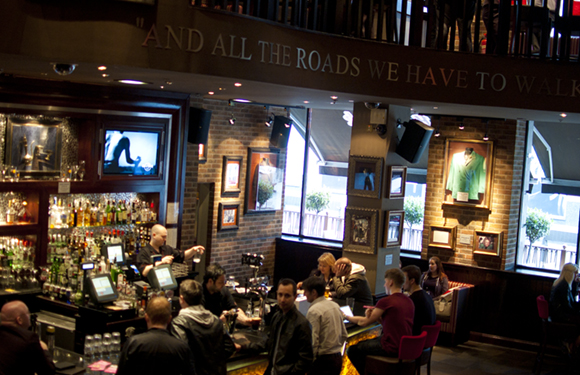 It was also totally rammed, at 5.30pm on a Thursday evening We were shown to our booth. I have to say all the staff we met all night were lovely. They have their customer service absolutely spot on, a very good first impression on that front. They were really busy, so they must be doing something right.
Without further ado onto the burgers.  Firstly the negative point is that they're shipped over from Germany. This can never be a good thing. However, a lot of other produce they do obtain locally and seasonally. They do have a strict criteria with the meat though, they don't buy on the open market, so had no worries on the horse meat scandal. Do average Hard Rock Café customers care where the meat is sourced though? In light of the scandal, I would hope that they do. I believe they are moving towards local sourcing of meat for their burgers though. (If I remember it correctly).
The mini burgers arrived on Vinyl records. I got Toto IV. I was happy with that as it has Africa on it. I'm partial to a bit of MOR Yacht Rock. 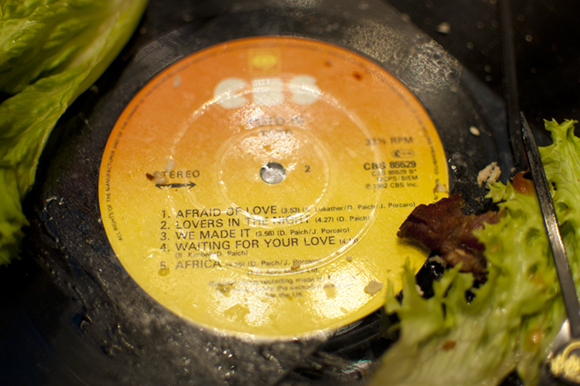 Mrs Bacon got Thin Lizzy. Which is ironic as we're both heading for fats-ville if we keep eating like this! 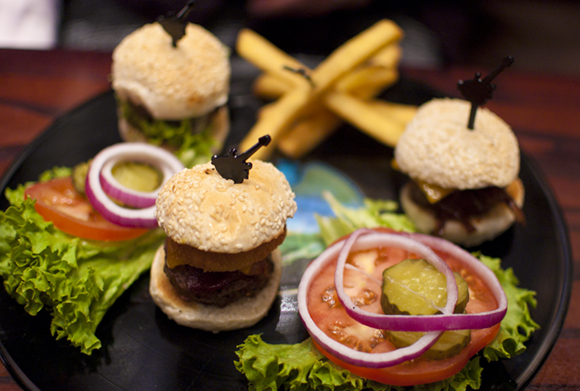 The burgers themselves were surprisingly edible, and cooked quite well. Medium rare, pink inside and actually tasting of meat, which strangely some burgers don't. 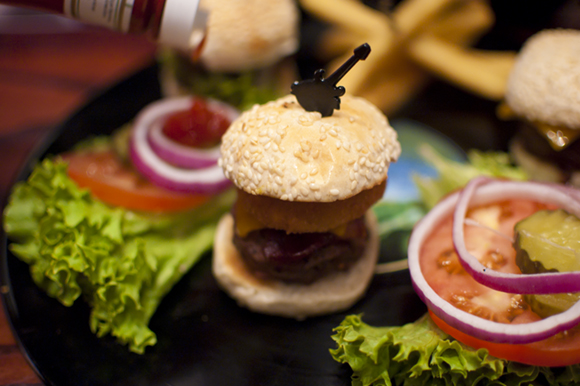 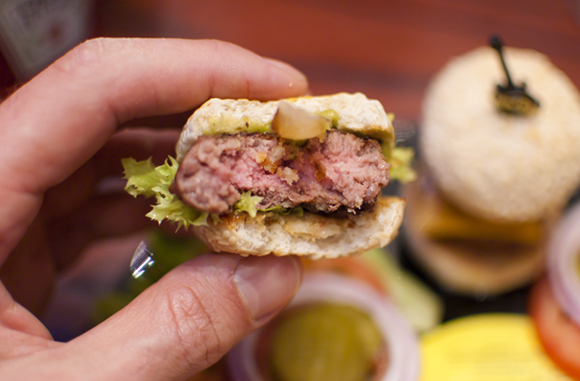 My favourite in the first batch was the SOB Burger which had Monterey Jack cheese, guacamole and chipotle purée. The burgers kept coming, and John the manager told us in detail what was on each one. (Rather like getting road directions I'd immediately forget which one was which). 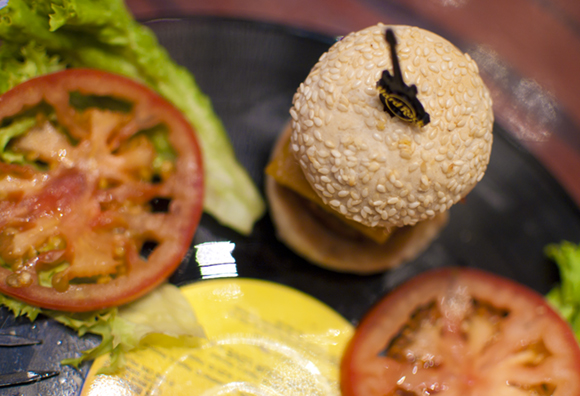 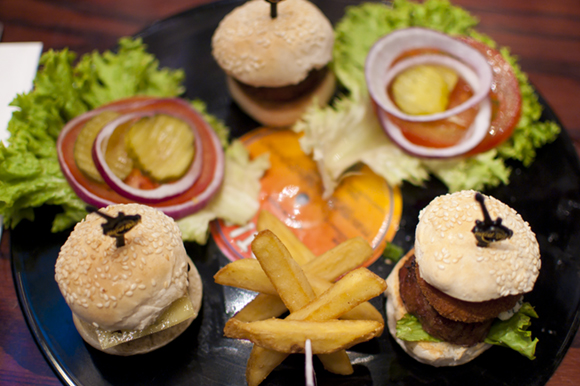 This man loves Hard Rock Cafe, is really passionate about his job and is proud of their food. So much so that it felt a little like that episode of South Park where the family try to go on a free skiing trip but are indoctrinated at every turn by the reps selling a time-share. By the end of the night, we were thinking, where do we sign up to be shareholders!
By the time last vinyl record of mini burgers came, we were all 'burgered' out. The dry bread rolls were beginning to take their toll, and I felt like Man vs Food. Not before my favourite of the night, The Blue Cheese Burger, which had a very pleasing tang to it. (Mrs Bacon's favourite was the Hickory Smoked Burger.)
We didn't really rate the veggie burger or the lamb one and the onion rings were unbelievably salty, even for us, totally inedible in fact. Sorry to say the chicken wings weren't up to the ones we had at All Star Lanes recently or Dog Bowl. 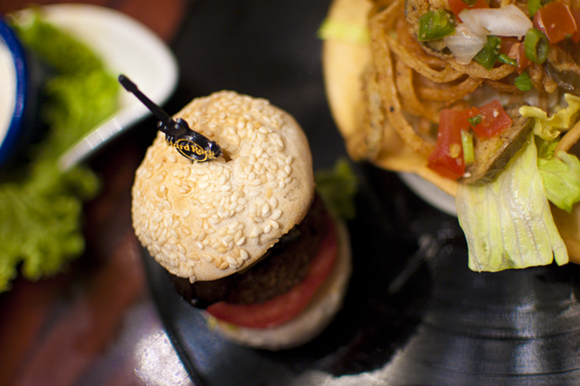 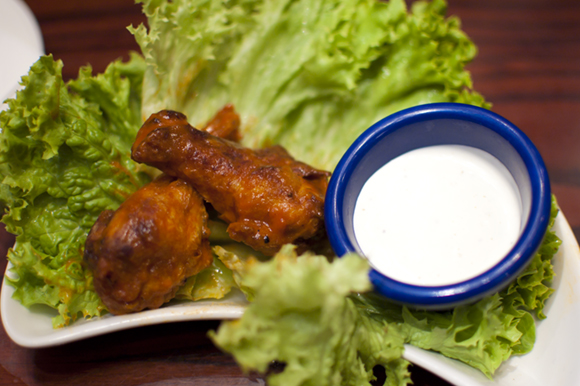 But, in the end we actually enjoyed our evening at Hard Rock Café, despite my misgivings about eating in a 'mainstream' chain restaurant.
It was interesting to go somewhere none 'foodie' for a change and as broad as it comes. The service was actually excellent, this is one of their USP's I think. We were asked what music we'd like on the screens. I sent for Bowie, Mrs B went for Shiny Happy People which was quite apt. We were fairly happy after complimentary Prosecco and the spicy Gini Hendrix cocktail (which was invented at this branch.) 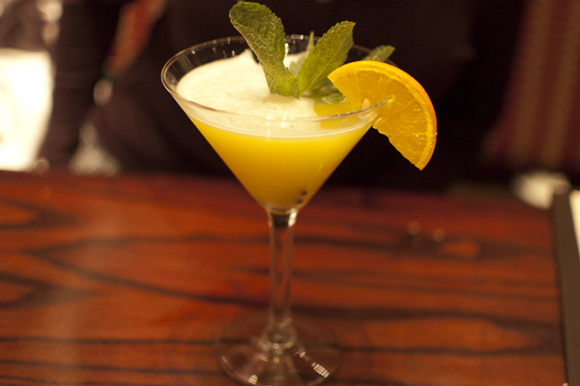 The burgers weren't the best in Manchester by a long way, they never could be as they're not made on the premises. There's been a revolution in 'luxury' burgers over the last few years. You can go to Almost Famous or Solita, and you know it's top quality meat by local butchers Frosts, I've even seen pictures of the cattle on Twitter!
I have to be honest in my blog, why anyone who loves food would go to Hard Rock Café over the likes of those that I mentioned is beyond me. Almost Famous for instance is an independent, plus it's cheaper, cooler and the burgers are ten times better, as well as being locally sourced.
But Hard Rock are clearly doing their best within the necessary frame work of a chain restaurant. (The meat like the steaks and ribs are actually from Scotland, so that's a good thing definitely.) But you know what; the burgers were surprisingly not that bad. Similar to other chains like GBK I'd say.
However Mrs B tells me the prices of some of the burgers were £13!  This is too expensive in our view, but you pay your money and you take your choice. 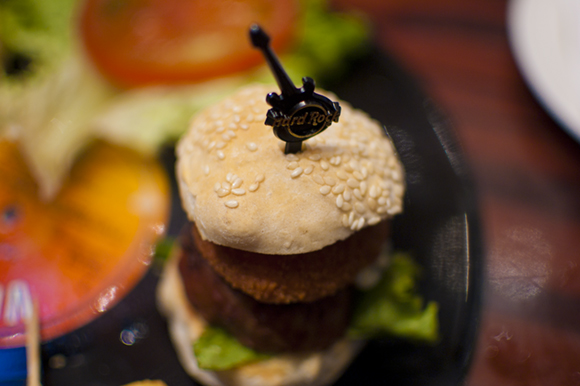 Would I go back to Hard Rock Café and pay for a meal? In all honesty no, as there are too many competitors that are in our view doing this food better, and with Byron Burgers opening up round the corner shortly, we think HRC need to up their game even more. The burgers were pretty good, but they are not currently locally sourced which is just not something we can endorse.
But like I say it wasn't a bad meal at all.
Anyhow, you don't really go to Hard Rock Café for the very best food in town, it's the combination of everything that they do. It's a successful brand, it's noisy, it's brash, it has excellent customer service (on our visit) and it gives people exactly what they want. People buy into the brand, and fair play I say if they enjoy it.
Yes it might not be the sort of place we'd choose to go, but it was actually an enjoyable evening, even for us.
To conclude; I have learnt two things, one; don't judge a book by it's cover and two you can actually eat too many burgers. 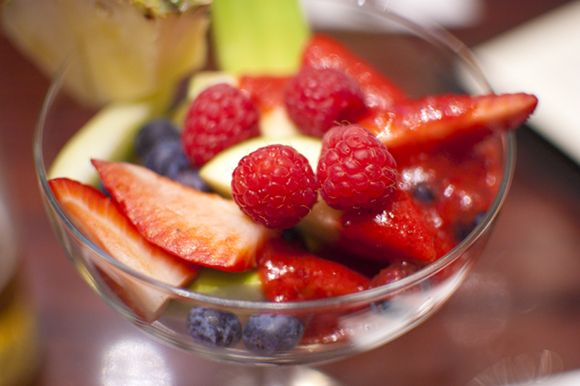 *For Southerners: Mithering is a Northern word  meaning to pester.

Disclaimer: Please note all opinions are our own.
We will consider 'comped' meals like this one, but will always tell the truth how we see it anyway.
Constructive criticism is hopefully helpful to those concerned, but if there are any factual inaccuracies, we are happy to correct them.

Further reading: In Defence of the Dirty Burger: Why we've never had it so good.

Follow @Bacononthebeech
Posted by Bacon on the Beech at 18:01