I'm always having 'idiotic eureka moments', (as comedian Frank Skinner describes them). These are times when there's something so glaringly obvious but you just didn't get it. For instance, Jean-Claude Van Damme is nicknamed 'The Muscles from Brussels'. I just thought it was just because he had a well toned physique. Then I was reading somewhere about how good the mussels are from Brussels, and the light bulb turned on in my dimly lit brain. Ah, I get it now. I've been to Brussels and had mussels there as well.
So Mrs Bacon and I were sat in the new The Dog Bowl on Whitworth street West, and she said to me, 'it's clever, the name of this place.'
'Ah yes', I said, 'I get it now'.
You see The Dog Bowl is a bowling alley and it's owned by the people from Black Dog Ballroom. Oh dear. 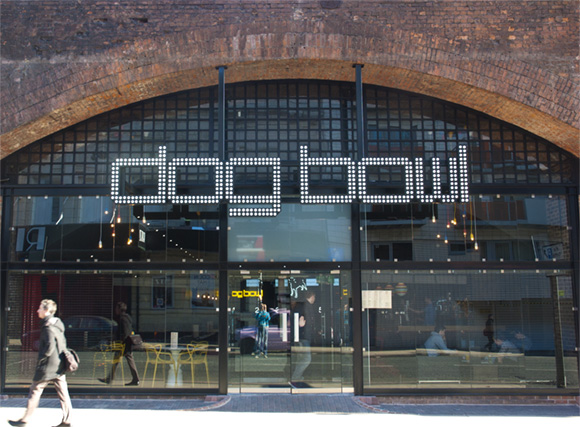 It's the second bowling alley to open up in the space of about a week.
As it's just round the corner from Mrs Bacon's workplace, we thought we'd give it a go. It's not dissimilar to it's neighbour Gorilla inside with chic industrial design and the dog logo plastered everywhere (It's even on the wall on the street behind pointing to the location.) 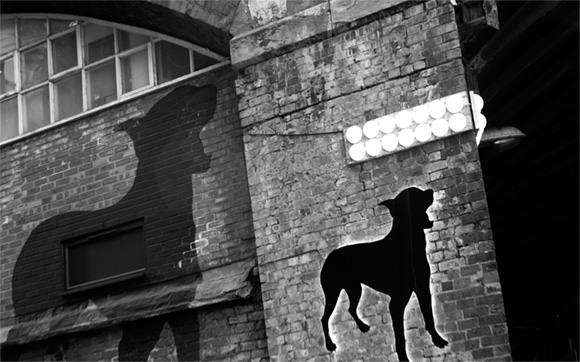 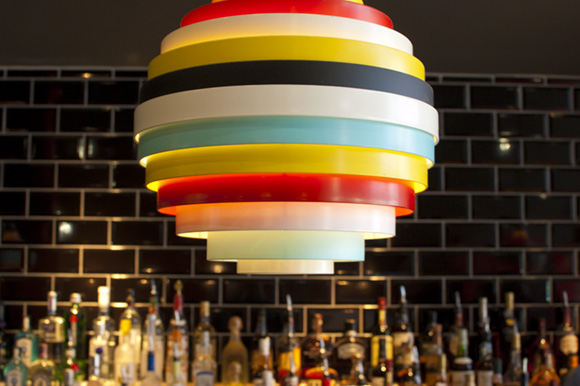 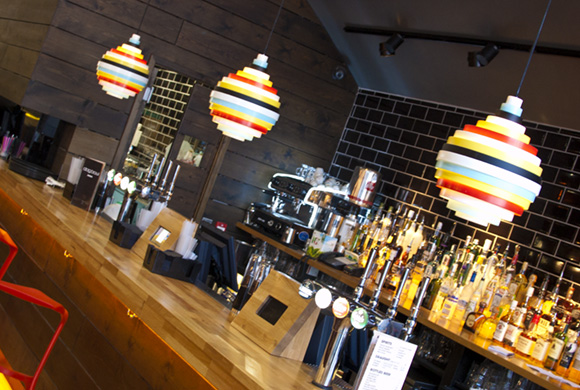 Then there's the massive bowling alley at the back. 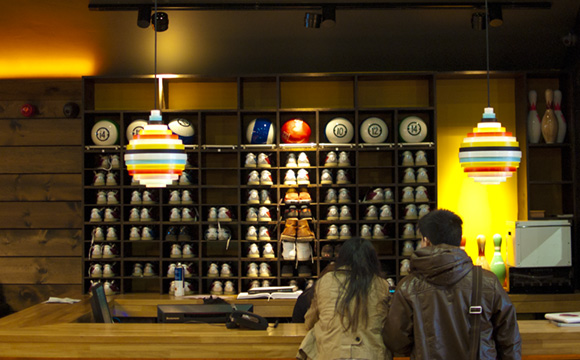 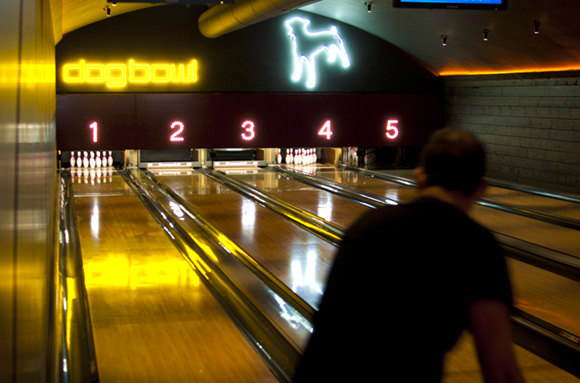 We weren't there to bowl though, we were there to pig out. I love this sort of food, mainly because it's so bad for you. (My least favourite shop is a health food shop, they're just so worthy.)
And like Gorilla, there are booths (they seem to be everywhere I go these days).
To start we ordered Pork Cracklin’ (Strips served with spiced apple sauce, £3). These were ok, very crunchy and dry but satisfying when you got a good one. 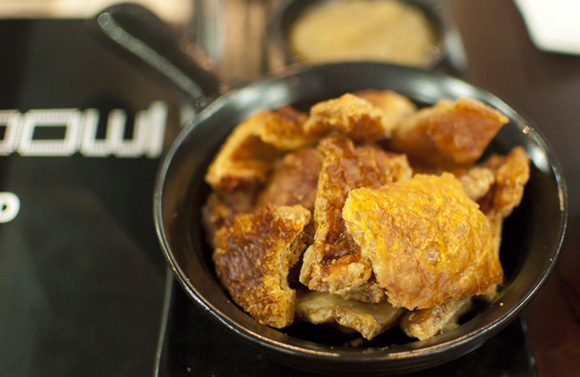 Also the Boned and Fried Wings. (Served with Bourbon BBQ sauce & ‘Barking Mad’ Hot sauce and a stick of celery, 6 for £7). We enjoyed these, they're bar snacks really, hot juicy and spicy. Treats that go well with a cold beer. 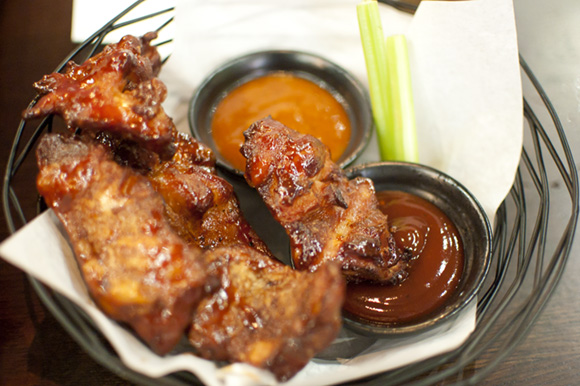 The mains came soon after, firstly a Tijuana Burger, Jack Cheese & Pico de Gallo (£10.50). Nice and juicy, not as rare as I would like (we weren't asked), but not a bad burger at all. The crispy fries were pretty good, especially when slathered with their home made tomato ketchup. 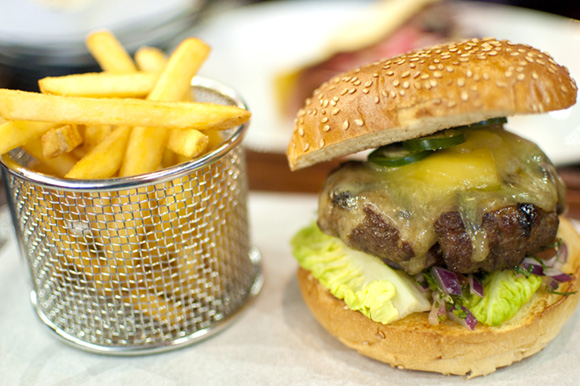 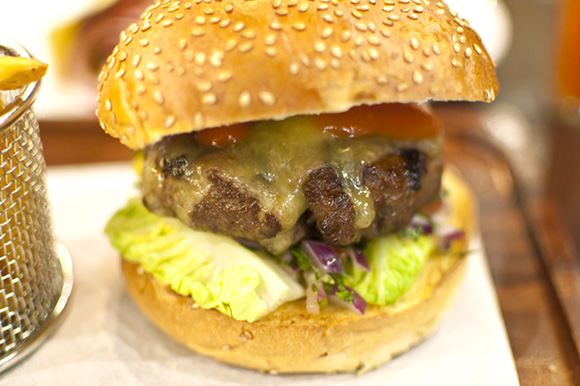 Slow roasted pulled pork shoulder Quesadillas (Toasted 10” flour tortillas oozing with Chihuahua, Monterey Jack, and Manchego cheese, £4), were delicious. I could see the fear in Mrs Bacon's eyes, the fear that I wasn't going to leave her any. Now I'm going to whisper this as I'm quite ashamed, but I've never had Quesadillas  before. I know, I know, I don't know how it happened either. But I will be eating a lot more of them in future. (I've no idea if these were 'authentic' or not but they sure were tasty). 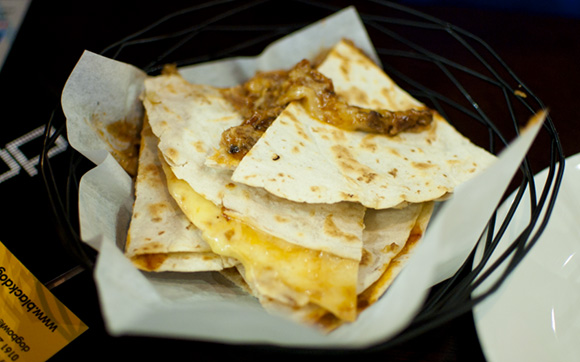 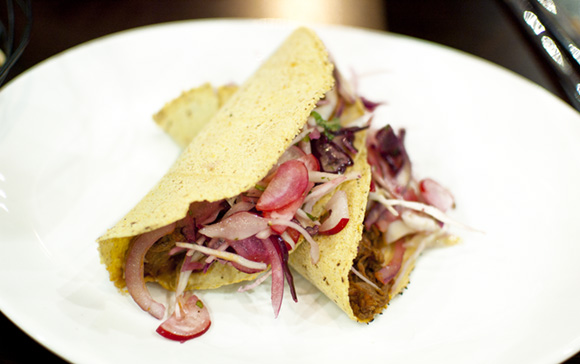 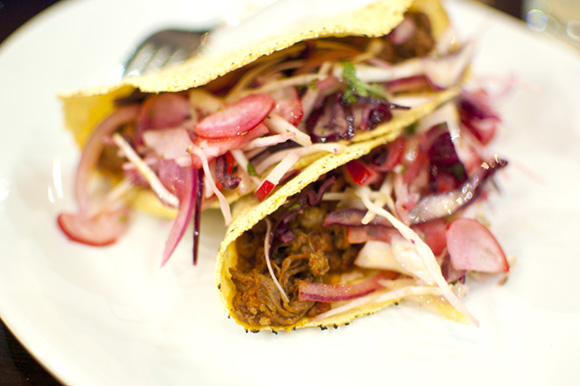 To follow we went for Churros & chocolate. (£4). We consider ourselves connoisseurs of the churros, we've visited the mecca of churros; Chocolateria San Gines in Madrid. These were not quite like the Spanish ones, but nice enough thin doughnuts strips. The chocolate was nearly there though and quite thick as it should be. (There was a separate jug.) 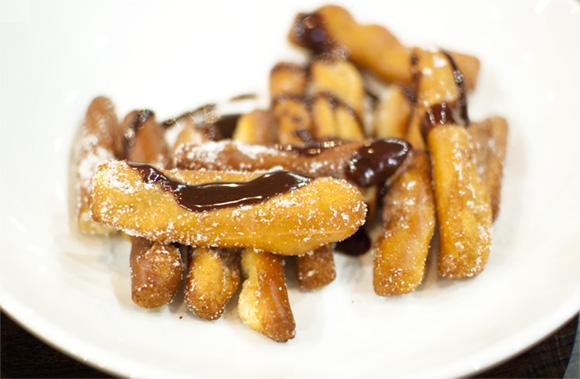 I was idly looking at the flyers on our table and I saw a 50% voucher off food. Surely this was too good to be true? But yes we could use them right away. So we got all this plus 3 and a half pints of San Miguel and a ginger beer for the princely sum of £25.90.
I can't tell you how happy this made me. 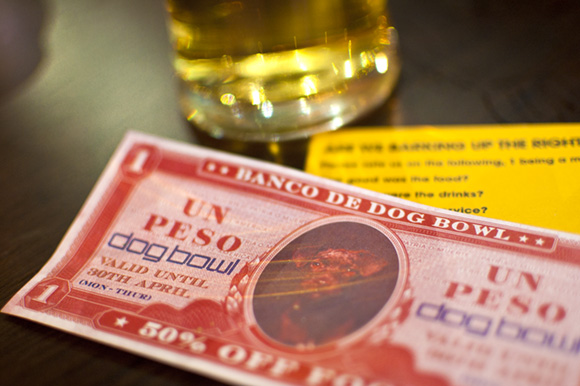 Dog Bowl is not really a destination place for 'foodies' like say Solita, there are better burgers elsewhere, and probably better tacos at LLLB, but we both had a great time there. (Although it is loud when people are bowling!)
They've pitched it just about right, the food is reasonably cheap and you can enjoy a good night out, bowling or not. It's bar food really and should be judged as such, I don't think they're aiming at anything else, so it's definitely succeeds.
It certainly won us over anyway. 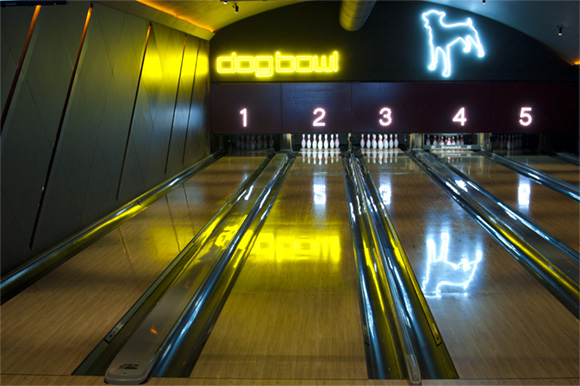 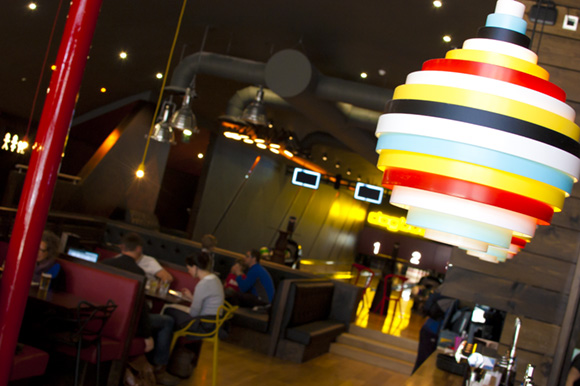 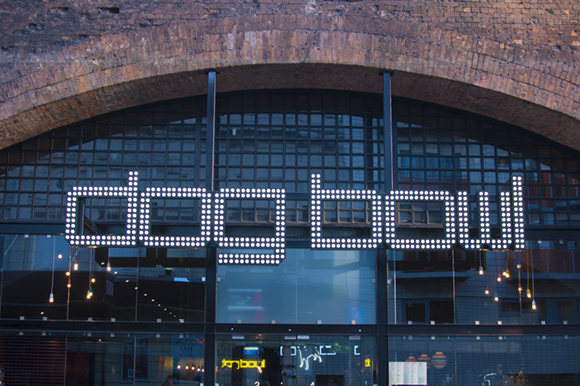 Follow @Bacononthebeech
Posted by Bacon on the Beech at 13:12