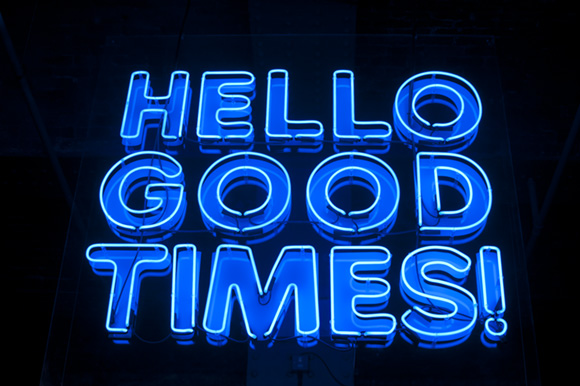 Mrs Bacon and I were delighted to be invited for another meal out last night (that means we didn't pay folks). Hello Good Times indeed. We were on a roll, literally as we were off to All Star Lanes. We'd already been to DogBowl and quite enjoyed it, so it'd be good to compare them as they opened within a few weeks of each other. 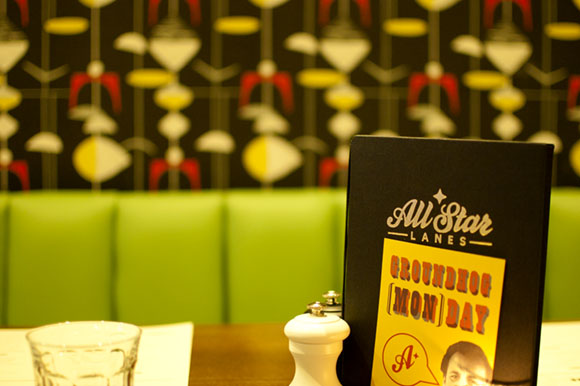 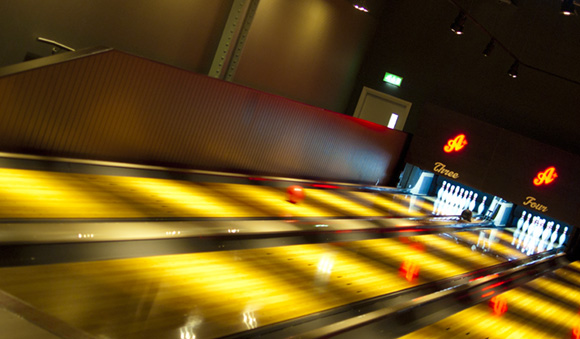 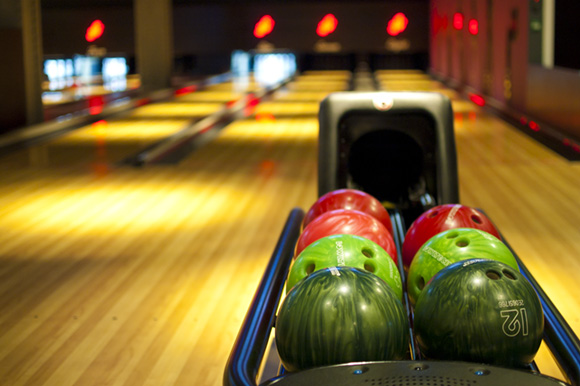 This place was branding itself more for the food which was a good sign. After we settled in one of the booths, we ordered some drinks. We went for Blue Moon, an American wheat ale brewed with coriander and orange peel. I'd previously had this in bottles and wasn't that impressed, it tasted like a sweeter inferior Hoegaarden. From keg though it was a different beast, it was so lovely and refreshing, really gorgeous. 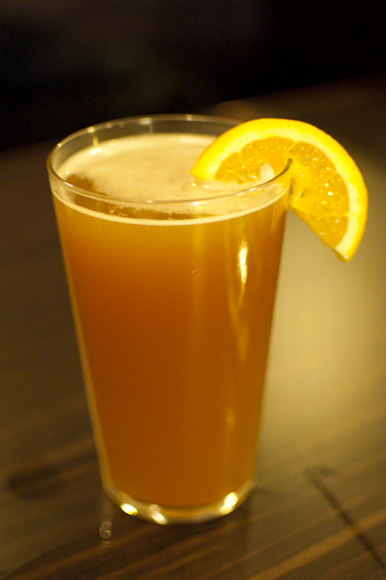 I noticed they had a superior beer selection to Dogbowl, in fact I'd say they probably have the best American Craft beer choice outside of the Port Street Beer house. I didn't get chance to try the the likes of Flying Dog and Goose Island Honkers though as I was enjoying the Blue Moon so much. It wasn't cheap though, a pint will set you back £5.75.
There were people bowling, but unlike Dogbowl, you were shielded from the noise as they have different sections, we were in the dining room area, (as were food critic Gordo and the MFDF people).

Our starters arrived. First we tried the Scratchings & Tartare dip (£4) these were good, warm and crunchy and less dry and dusty than we'd had a few weeks ago. 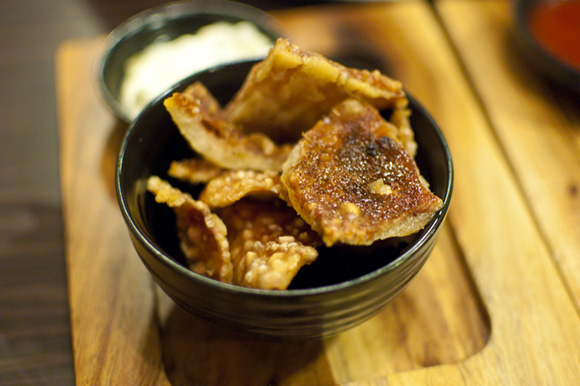 Also Chicken wings with Hot Sauce (£6) these were tasty, the combination of hot and spicy against with the cooling cheese dip is a fine one (and one we liked at LLLB). Although I think the wings at DogBowl just beat All Star Lanes in this round. 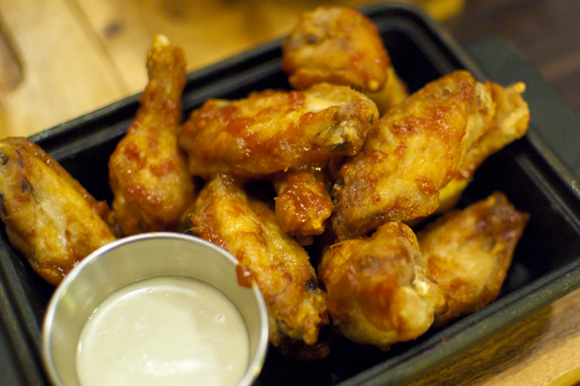 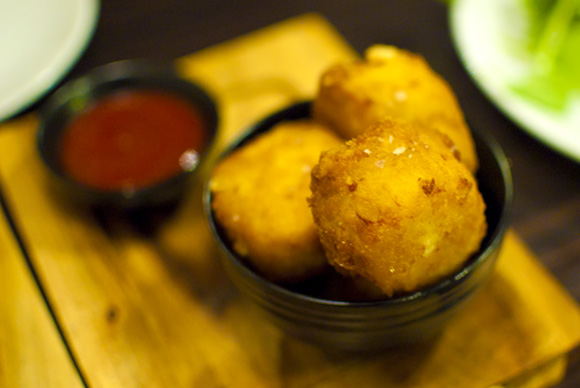 The Short Rack of Ribs (£8.25) were fabulous, sweet and spicy, the meat fell off the bone and melted in your mouth. 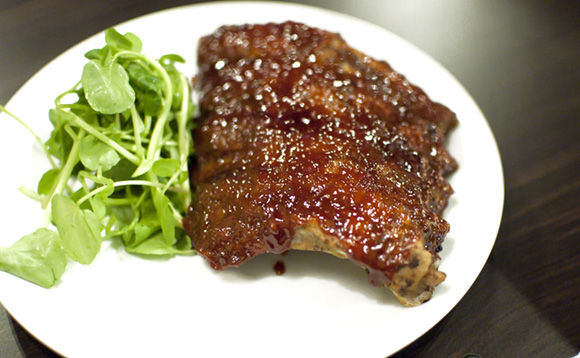 We were enjoying it immensely so far. I didn't even mind the music (which I normally hate). Somehow, 'I could be Happy' by Altered Images seemed to fit the place. The space worked better than Dogbowl, it's bigger and the noise of the bowling can barely be heard where we were sat. I had a walk round taking photos. They have two lanes which are segregated off with their own 50's fridge, this would be great for parties. I like the way they've decorated, and all the retro graphics are spot on. 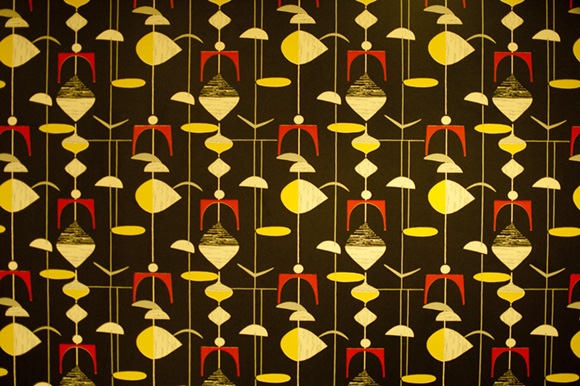 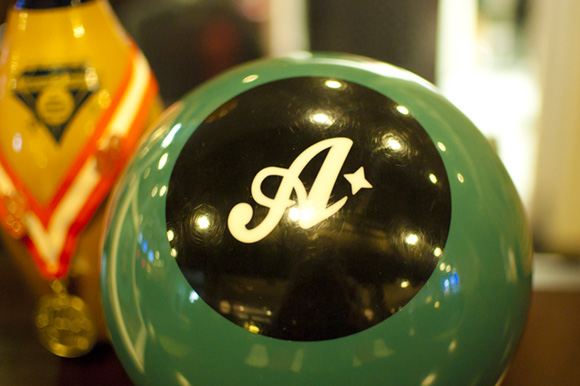 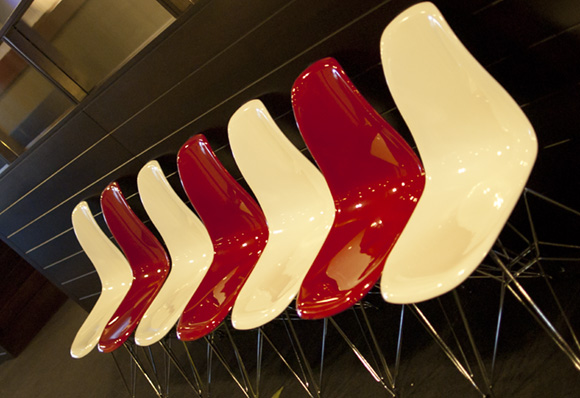 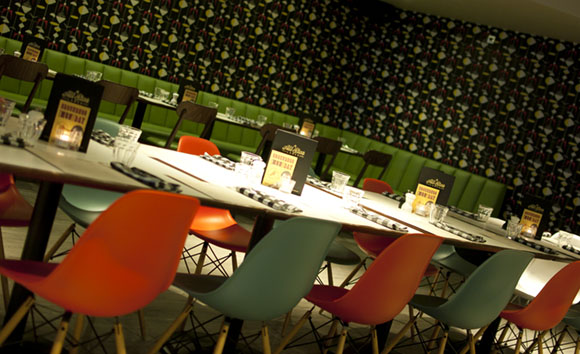 The waitress found me to tell me the mains had arrived (our waitress was really good friendly and chatty by the way).
The Hamburger (£12 plus Blue Cheese £1 extra) was served open. I gave it a big bite. Mrs Bacon looked worried as we were meant to be sharing, I handed it over for it to be cut up. 2/3 for me 1/3 for her. After a few weeks of fairly average burgers this was top notch and medium rare as I like it. It was probably the best burger I've had since Parlour and Almost Famous. The blue cheese worked really well.  The fries came as I like them as well, skinny and very crisp. 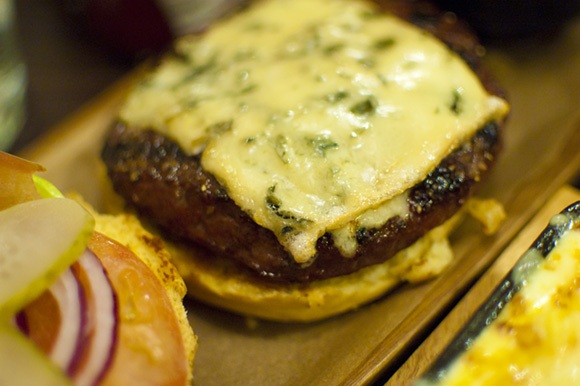 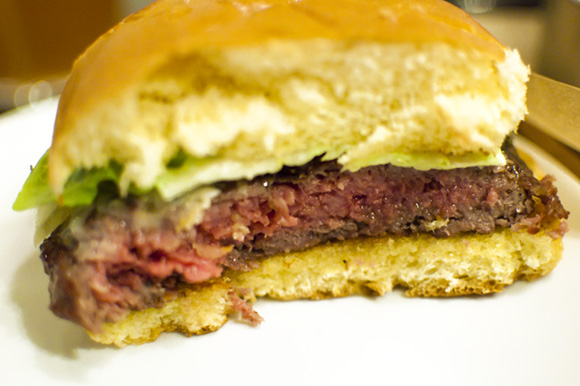 The Mac and Cheese (£10.5) though was our star choice. You have to add the truffle for £2 extra. You can really taste it. Despite feeling full, I wolfed it down. It was homely, comforting and absolutely delicious. 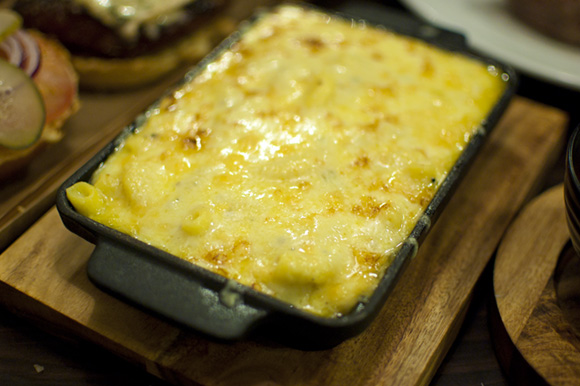 The 8oz Sirloin (£19.5) was just ok. Not rare enough for me (as usual) it was quite tasty, a little chewy, though not a bad steak at all. 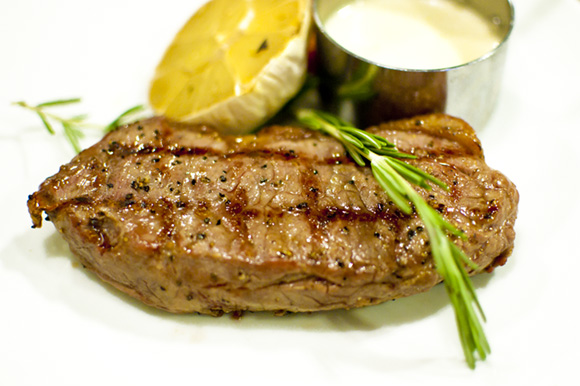 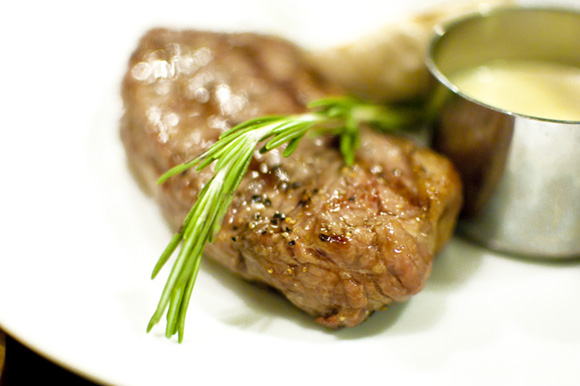 It was not quite as good as the one at Linen we'd had last week, but that was £10 more. I am very fussy with my steaks though, and am considering giving them up in Britain, as they're not really doing it for me any more. Despite being stuffed, obviously we went for the puds. They were a passable Baked Vanilla Cheesecake with mango & passion-fruit (£6) and 'Our Brownie' with Bourbon toffee & clotted cream ice cream (£6). They tasted 'bought-in', not bad, but again we were recently spoilt at nearby Linen and their fine desserts. 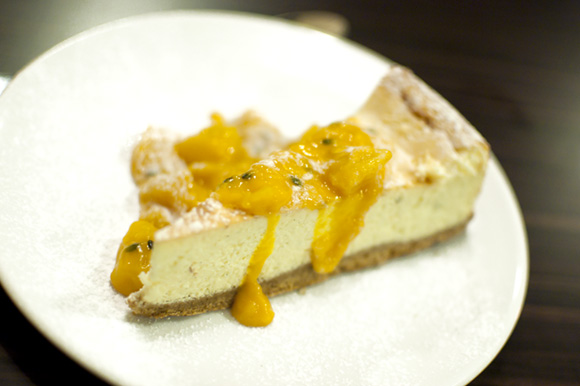 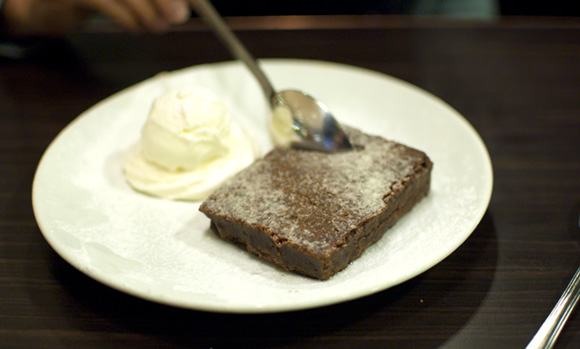 Overall though, we were impressed with All Star Lanes, the food for the main part was fantastic of its type. It beat Dogbowl hands down. I'd say All star Lanes is a restaurant with a bowling alley attached, whereas Dogbowl is a bowling alley with food (it was noisy, like eating in a bowling alley as well). It would have got an 8 if I was marking it, as the food service and atmosphere were spot on.
You could say we were bowled over by All Star Lanes if you were making a crap pun, which I'm not. 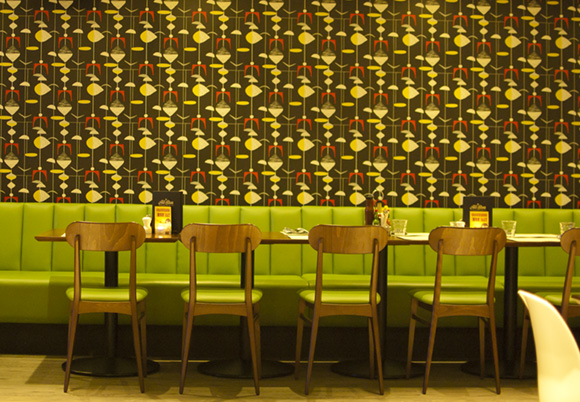 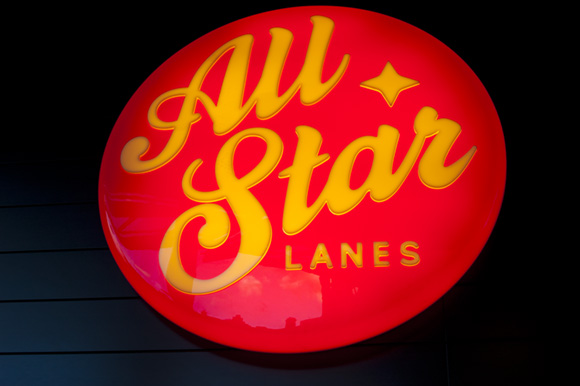 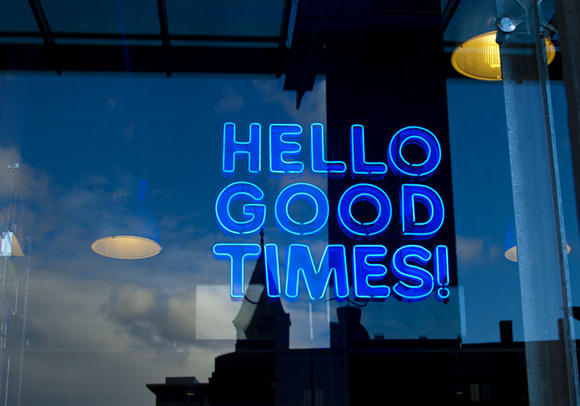 Follow @Bacononthebeech
Posted by Bacon on the Beech at 09:07