Simon Rogan at The French. 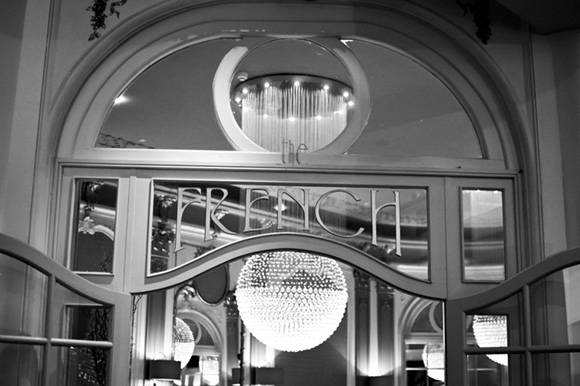 When Manchester's most anticipated restaurant opening of the year, Simon Rogan at The French, finally opened it's doors, I was 2000 miles away on a hot volcanic Spanish island. Despite enjoying some much needed sun, I was absolutely gutted that I was missing it. For 'foodies' this was a really big deal. Anyone who's been to L'Enclume in Cartmel will tell you that Simon Rogan is one of our country's best chefs. It has two Michelin stars, whereas Manchester currently has none. There are people who say that this doesn't matter. They are wrong, we need at least one Michelin star restaurant if we are to show ourselves as an international city that we claim to be. The newly renovated French restaurant looked like the answer to all our prayers. All the reports were great, including London food critics who normally hate having to come up here.
I told myself I would miss out on the much needed 'bedding in' period and that it would be better to go almost two weeks in. I didn't really believe it, but we booked in as soon as we returned. 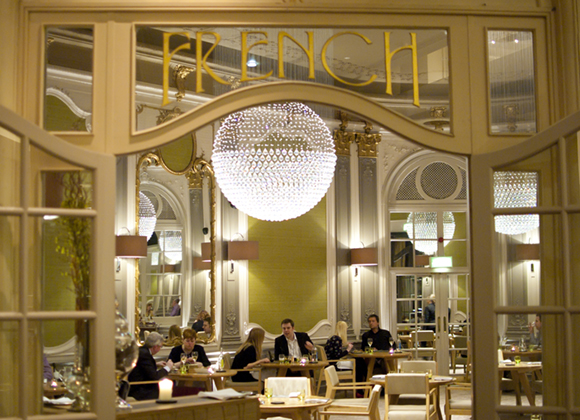 After some fantastic cocktails at Épernay round the corner, we walked briskly from the freezing cold into the The Midland hotel. 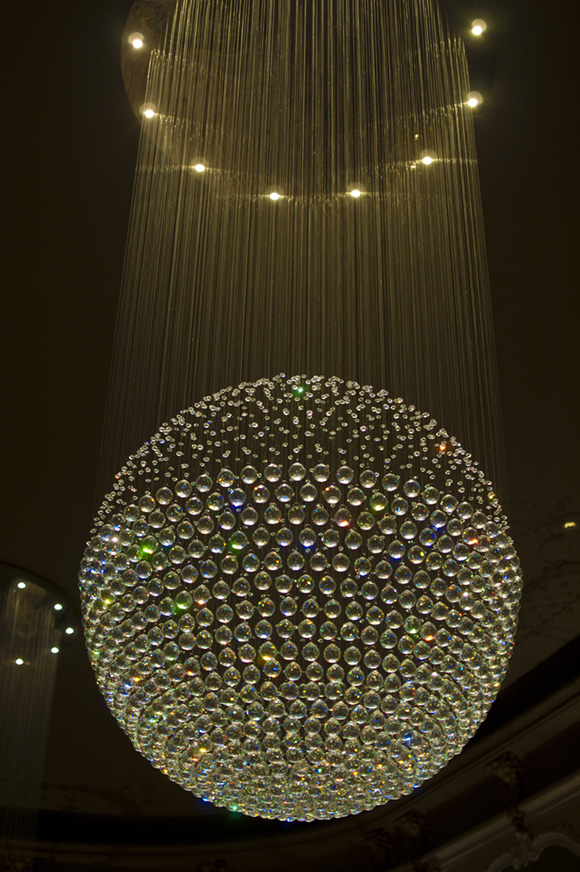 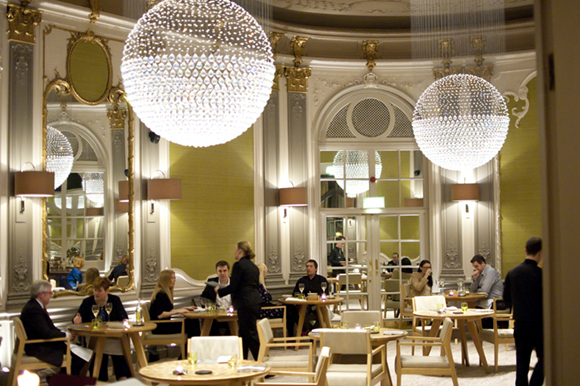 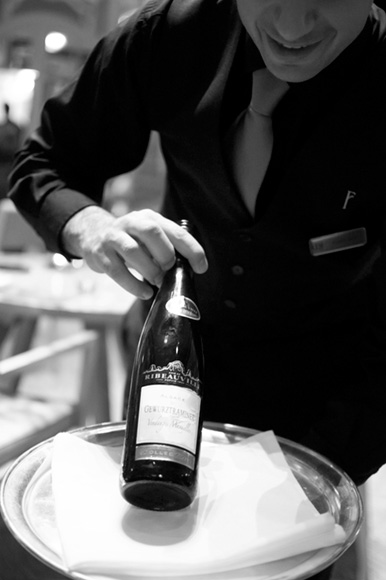 Brilliant first impressions, apart from the stunning interior, the lady who greeted us actually remembered us from L'Enclume. Ms Arroz and Dr Gambas were as ever our eating partners. The dining room is so beautiful, the chandeliers are stunning, it apparently took 5 days to put them up. We got a good table at the top end. The room's actually a little smaller than I imagined, but you don't feel that you are on top of your other guests which is a pet peeve of Mrs Bacon and I. Despite having high ceilings it didn't feel cold at all.

The two ladies who lunch were having the wine tasting pairings (not actually a menu proper as such yet). Mrs Bacon and I went for the cheapest and only New World red on the list, a decent Chilean Carménère which was just under £30.
Some amuse bouche arrived after a short wait. Little crackers with smoky pork and eel with parsnip pureé, and nettle and dock scotch egg style balls with mustard mayo. They were all delicious. Yes, we knew this was going to be very good indeed and it was all before us. The three types of bread were excellent too. 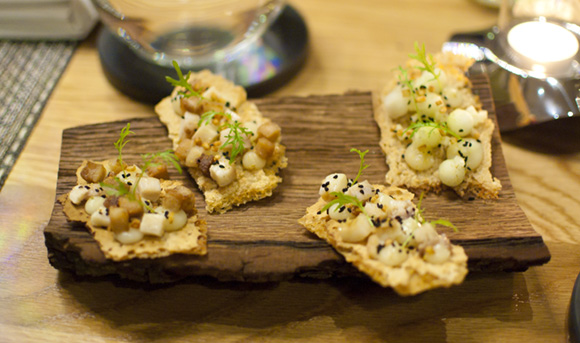 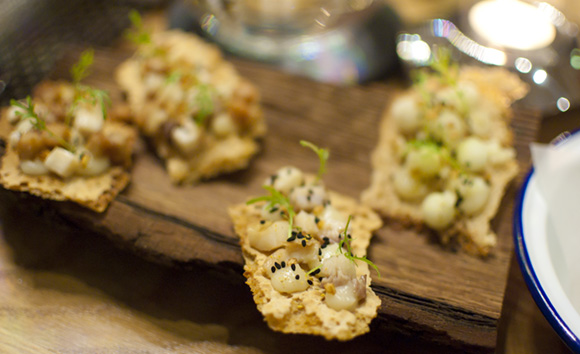 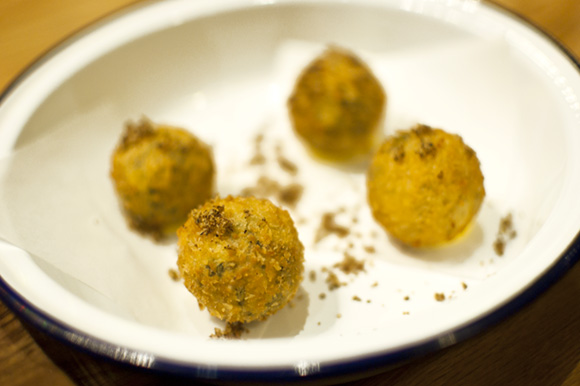 I could waffle on about how good everything was but it will just sound repetitive. It was pretty much all stunning, so for the most part, I'll let the photos do the talking. But I must say that eating Michelin star standard food like this is a real joy, it smells so good, I always give it a big inhale before eating. And now taking photos actually slows me down which is a good thing, so whilst I'm taking photos I can hear the others making  'mmmmmmm' sounds. 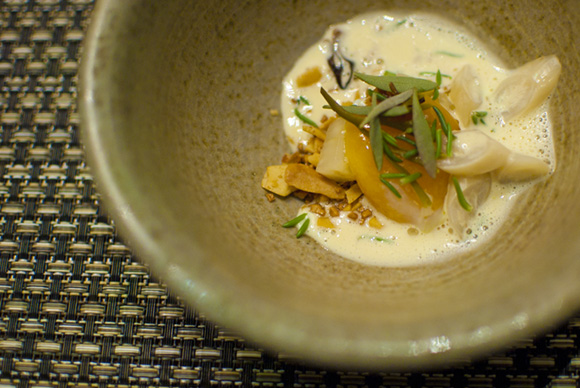 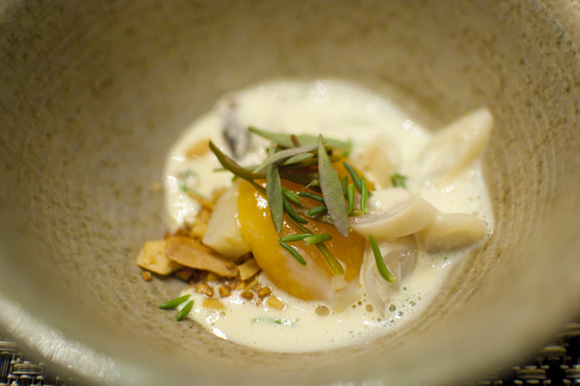 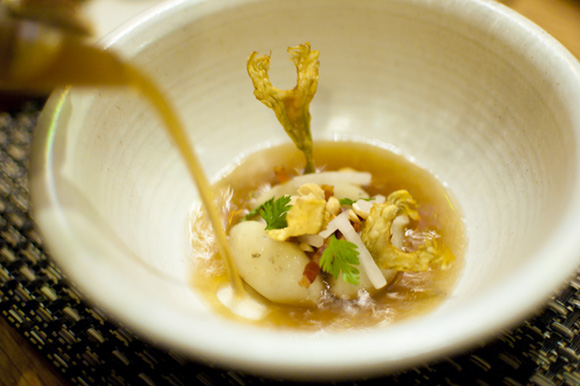 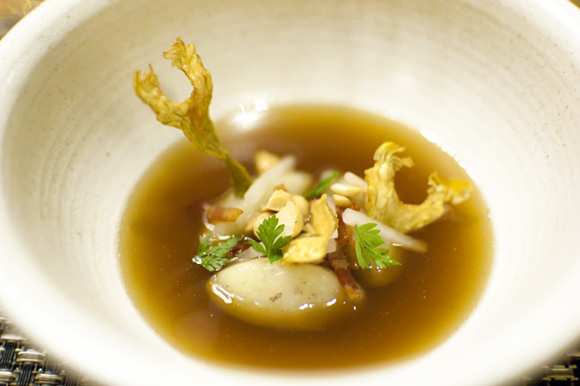 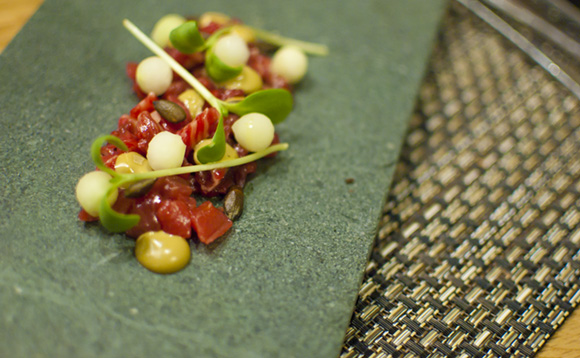 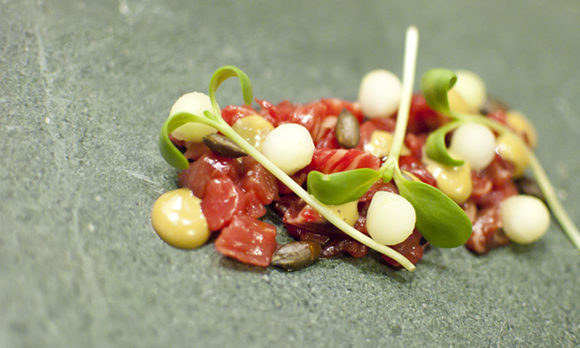 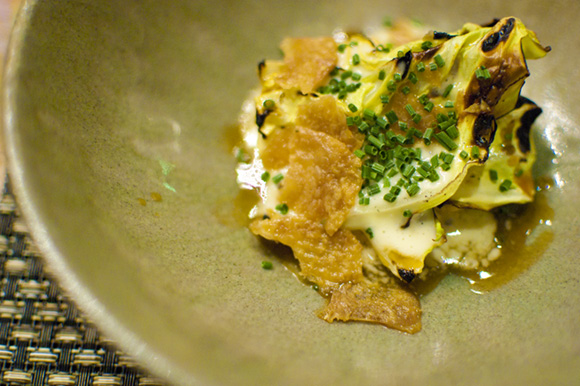 Early spring offerings, vegetables, herbs and flowers, lovage salt. How can he make a salad so good? 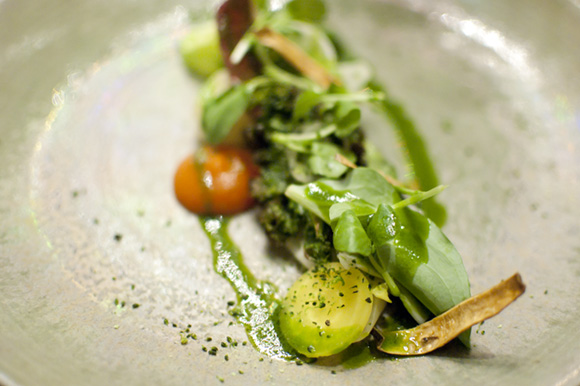 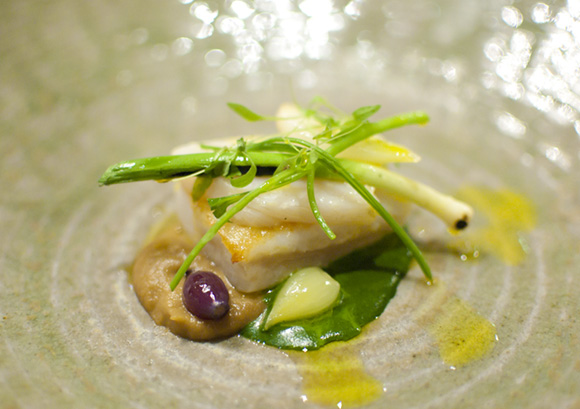 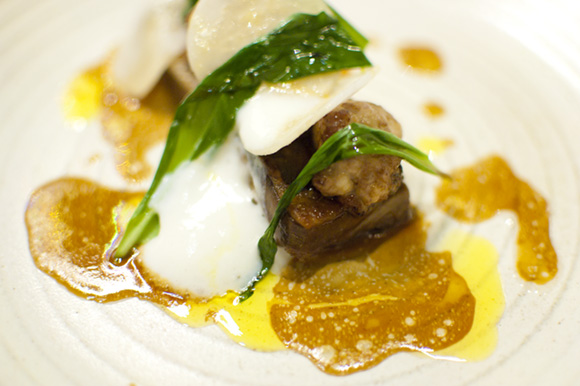 Sometimes I taste food in a really good restaurant such as this, and am immediately transported to childhood and eating the same thing, despite having eaten lamb a million times since, and this is what happened in this case, the flavour was so intense, and as a child your tastebuds are much more sensitive, so this is why this happens. It was the best lamb I've ever eaten. My star dish. 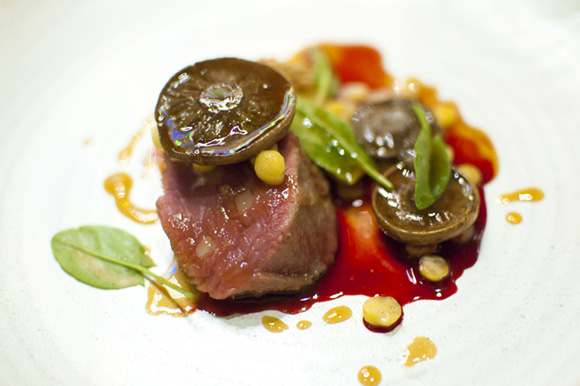 This was the only dish I wasn't so keen on. I mean it was ok, but the meat was bland, I just didn't get it, Mrs Bacon left me some as she was struggling, but I didn't eat it all.

Then we got a fab cheese course, with fantastic thin home made crackers and a lovely selection of British cheeses. 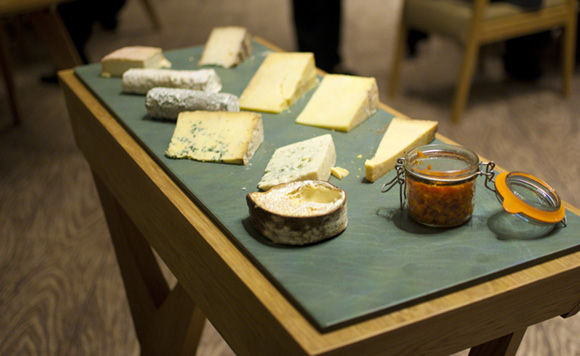 (My memory and notes are a bit 'hazy' at this point so apologise, I cannot remember the name of each of them). The portions were generous though as opposed to the stingy portions I got at Aumbry recently. (Also, Ms Arroz and Dr Gambas refuse ever to go back to Abode after they weren't allowed more crackers!)
The Desserts were both brilliant, especially the - Sweet cheese with rhubarb toasted oats, mulled cider. (One of my favourite ingredients and one of my favourite puddings ever). 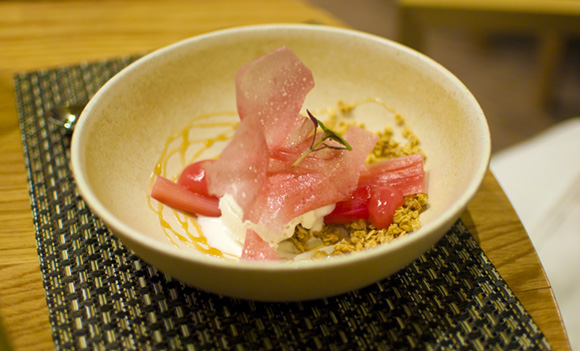 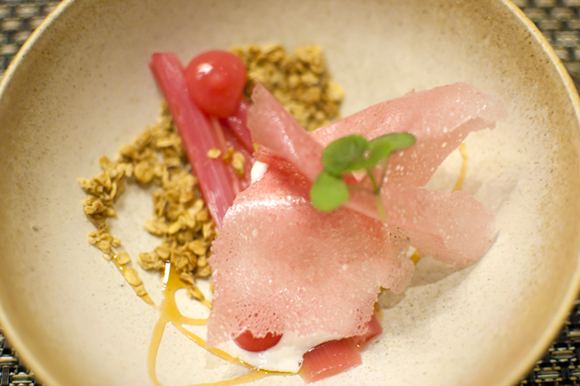 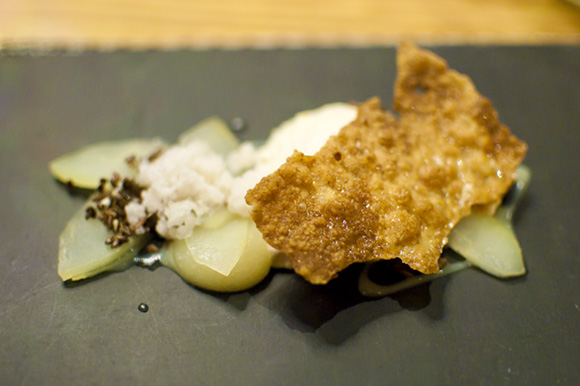 We finished off with a lovely red dessert wine, (no I don't remember that either).
The French is exactly what Manchester needed, a flagship restaurant that will hopefully get a Michelin Star. Sad though to see a few no shows last night (they didn't get that at L'Enclume very often so will have to amend their booking system because of these selfish people). A real shame as they've had to turn others away.
If it is successfully commercially, which I think it will be, other high end operators will most likely move in, which is really exciting for Manchester.
The French is head and shoulders above any other restaurant in the city centre, and the price was extremely reasonable for food this good. 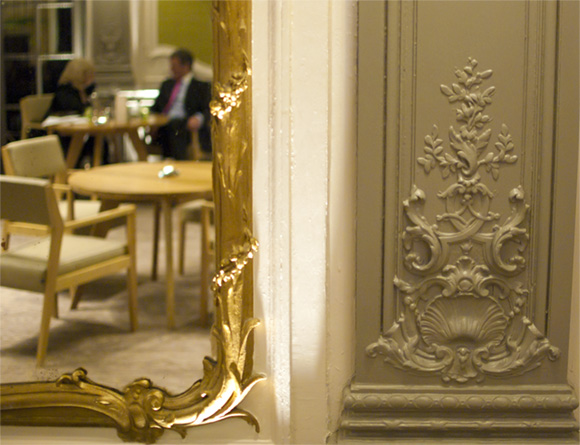 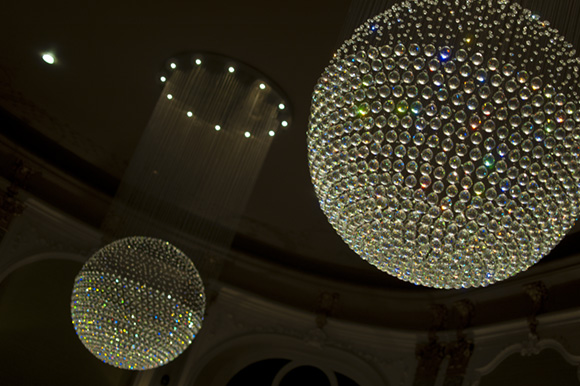 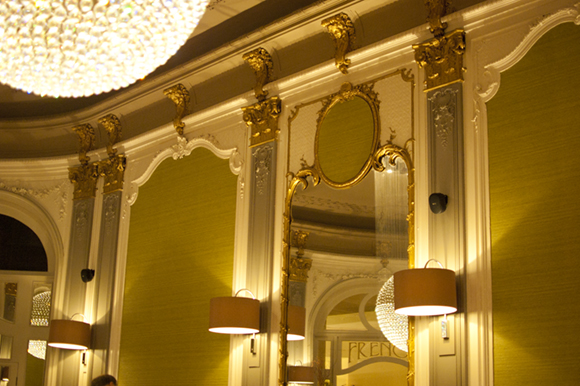 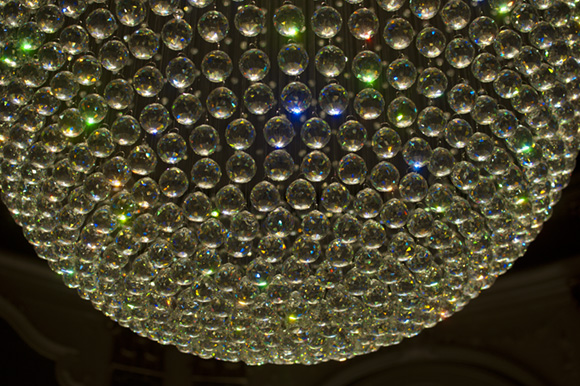 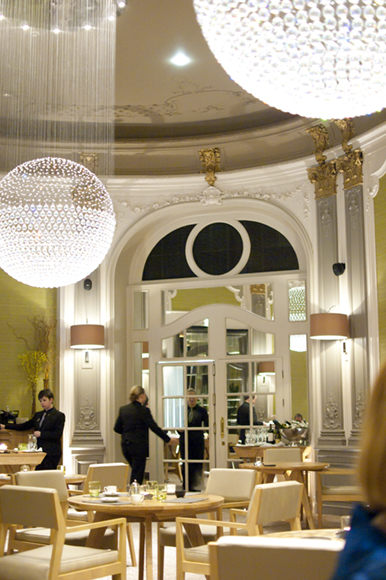 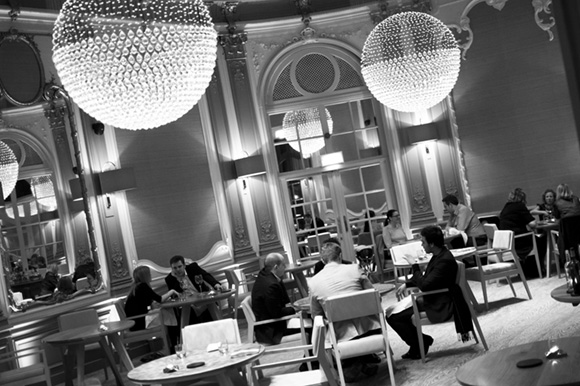 Follow @Bacononthebeech
Posted by Bacon on the Beech at 14:20