In the mid 1990's I went to evening classes at the Instituto Cervantes on Deansgate in Manchester (next to Dimitris.) I am now quite competent in speaking Spanish, but in ordering food only. We used to have quite a laugh in the lessons, so we all agreed to meet up at the end of term at one of our houses (including our teacher.) Somebody came up with the idea of each of us all making something authentically Spanish to bring to eat. What should I do? I was and still am too lazy to be bothered cooking something. I know I thought, I'll buy some tins of Asturian sausage & bean casserole Fabada from my local deli, put them in a casserole dish and they would be none the wiser. I actually intended to own up, but everybody was so impressed that I'd made this really authentic tasty Spanish stew, plus they'd all spent all day slaving over a hot stove, that I didn't own up in the end. (I still feel a bit guilty about it to this day.)
They just couldn't believe how good it was, I remember my tutor saying, "but you put in the morcilla and everything!" 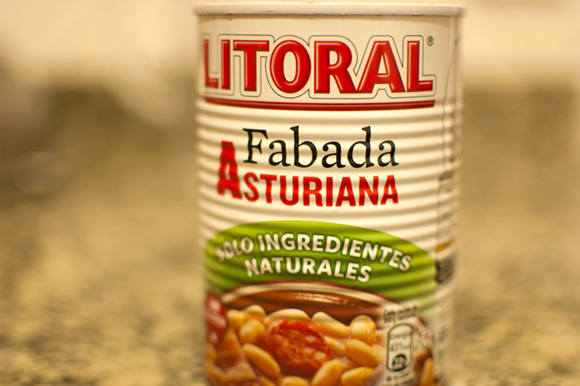 Indeed Litoral Fabada Asturiana doesn't actually taste like how we'd imagine a tinned product to taste like. 'Just opening a tin' sounds like a punchline in a lame 1970's sitcom about a housewife who can't cook (probably the awful Butterflies.) In Britain it's seen as a poor alternative because most of our tinned products are mass produced rubbish, full of E numbers, sugar and salt.
In Spain you can get some fantastic tinned foodstuffs, like some really good quality fish. Indeed gourmet tinned fish is revered in many high end Spanish tapas bars. Tins are just a way of preserving a product, so there's no reason why it can't be a quality food as well.  In some cases it can actually improve it; “Canning mellows seafood and tenderises it,” says Quim Pérez, the fourth generation owner of Quimet i Quimet in Barcelona. “It gives it a new and unexpected lusciousness, providing it’s a top-notch product in the first place.” Indeed Ca l'espinaler tapas bar just north of Barcelona sells only sea food from cans, but this is extremely high end product; a 6 ounce can here sells for €156! 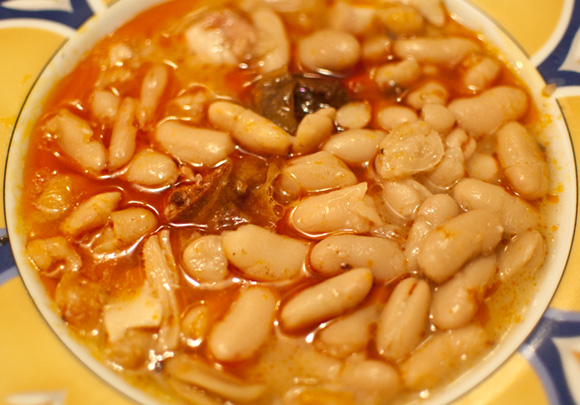 Litoral Fabada sells for just around €2, but it is 100% natural using a traditional recipe. Fabada is a traditional casserole consisting of haricot beans, morcilla (Spanish black pudding), pork and chorizo. It's a big hearty affair, often eaten in Winter, and I've eaten some great ones over the years especially in Madrid (you tend not to see it so much in Andalucia.) This tinned version really does taste home-made. When you open the tin, it never looks that appetising, there's often a layer of fat on the top, but trust me, that's where the taste is - in the fat! (If you're counting the calories you're probably best skipping this bit,) but it sure is mighty tasty, with some crusty bread.
Whenever we self-cater in Spain we always buy a few tins (also the Lentejas by the same company.)
But since the airlines have cracked down on weight, (thanks Thomas Cook airlines) it's harder to bring them back to the UK.
If anyone knows any place to buy them in the UK please let me know!

Follow @Bacononthebeech
Posted by Bacon on the Beech at 17:37