Aumbry is one of those rare Manchester restaurants in that when a London based food critic suffers the pain of having to travel up here to our fair city, most times they still give it a good review. Local 'foodies' make a pilgrimage there at least once a year. You may have seen Chef Mary-Ellen McTague on BBC's Great British Menu recently. (I'd have loved to try the cold baked bean bath dish, but this was not possible.) 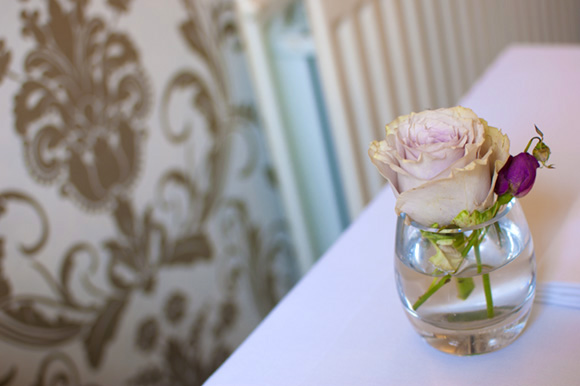 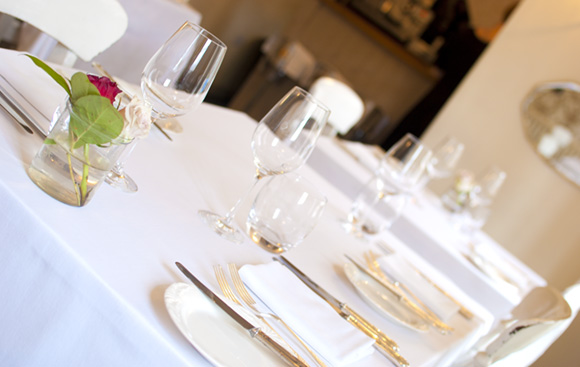 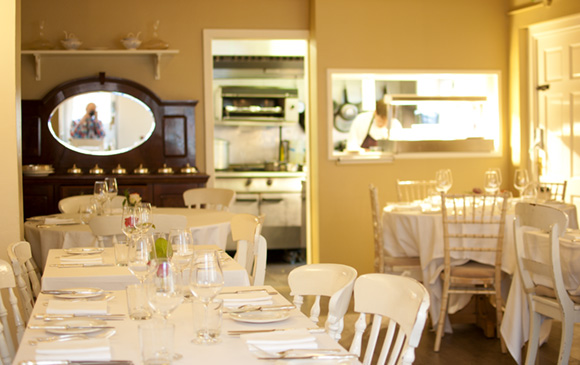 I decided to make my first visit of the year up to Prestwich for lunch. I was going alone this time, I'm at the age now where dining alone is not a problem for me. I was the first in on Friday lunch time at midday. All three of the waitresses were brilliant and looked after me very well. This is the best sort of service, friendly, chatty and informal. 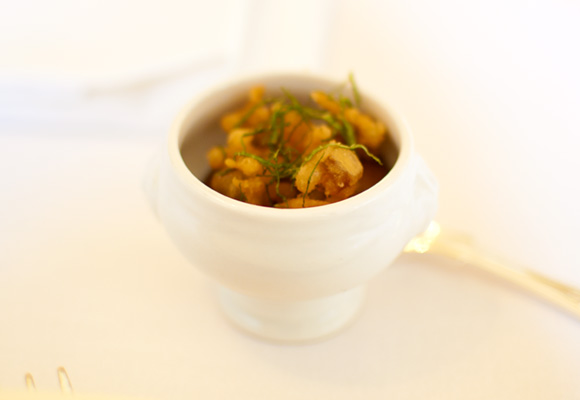 I started off with the Amuse Bouche of Potted Venison and Sheep's Sorrel, these were tasty morsels. 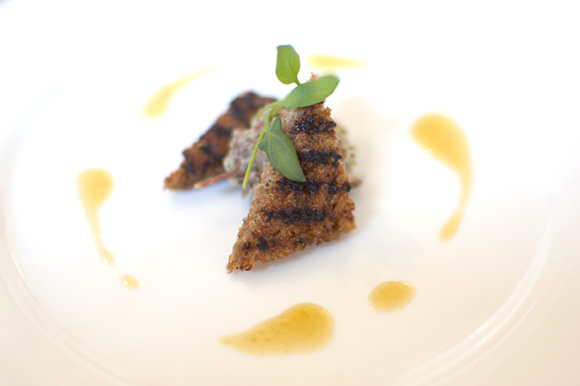 I was looking forward to the Bread & Dripping, I've recently had it in The Beagle and Gorilla, but the stuff here was the best, and I ate it with relish with two sorts of bread. 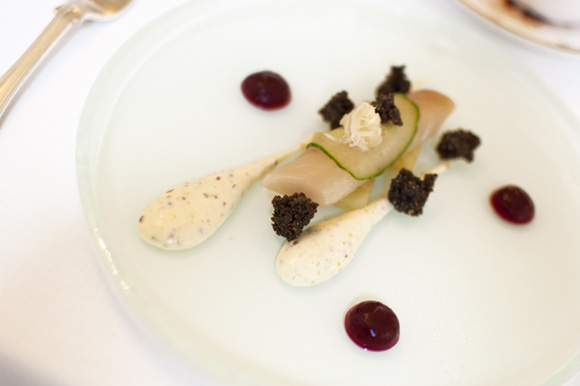 The famous Bury Black Pudding Scotch Egg, Mushroom relish & tomato ketchup was also a winner with me, I could have popped several in my mouth at one serving. Suggestion; can The Beagle serve these as bar snacks? 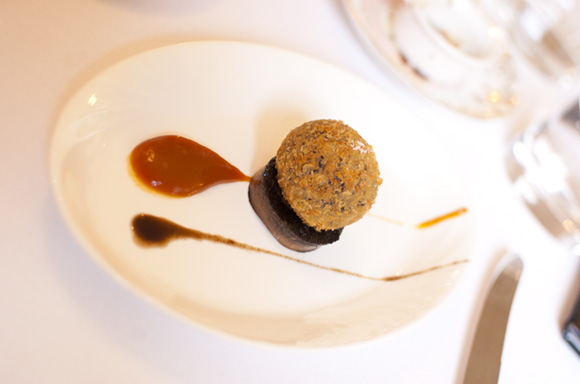 A special for course three, a big plump juicy Hand Dived Hebridean Scallop, Grannny Smith Apple & Lemon Thyme, no faults here, I mean you can't go wrong with produce this good.
Cauliflower & Oat Groat Porage with white onion purée next. The cauliflower and cheese beignet was like a little juicy Spanish croqueta, and I liked the texture of the porage. Things were going swimmingly.

Normally in a 12 course menu (which is what I went for to get everything that Aumbry has to offer) there's a few dishes that I'm not so keen on. That's the way it goes, but I like to try everything. The next course Game Consomeé was sadly one of those. I pride myself on eating pretty much everything there is out there, offal, liver etc. I will even eat the dreaded beetroot, even though it's not my favourite ingredient. (It made an appearance in the first course and I actually enjoyed it.) But this dish, The Game Consomeé Cured Hare Loin, Turnip & English Truffle I could not eat. I had the loin which was liverish, but just could not stomach the consomeé. It shocked me, there was an overpowering smell coming off it of what I can only describe as 'farmyard.' I do not wish to be rude about it, so will just say that it wasn't for me at all. If anything I see it as a failure on my part as I just couldn't 'get it.'

Neither could I quite understand the appeal of the next course the Poached Hake, Red cabbage, radish and cockles and mussels. It looked beautiful, but I found it a bit dull and bland. Though I liked the cockles and mussels element.

Next there came a bit of a wait, no a long wait. How many times could I mess around with my phone? The restaurant had filled out now. I didn't really like that I was sat looking into another table of three blokes. The kitchen was not pleased with the next course which is a good thing, it shows nothing leaves unless they are happy with it. So The Wild Scottish Roe Deer came out first. This was back on track for me.
Another long wait (I am impatient as Mrs Bacon will attest,) and the Slow Cooked Milk Fed Goat Fresh goats curd, cauliflower & barley eventually came out. This I thought was the best of the mains. I liked the texture of the pearl barley, though the scotch pine was quite subtle.

British & Irish cheeses arrived promptly, I could have done with some more of everything here, but they were well chosen, I liked them all. I wonder why they give you so few oatcakes though? The ratio was a little bit mean I thought. 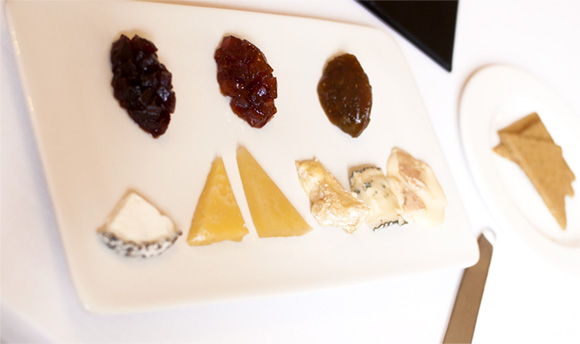 I remember the Grapefruit Posset Celery granita & grapefruit sherbet from last time, it's a delight, really creamy and fresh, (not sour or bitter as you would imagine) a perfect dessert.
I swapped over the second dessert for an Apple Tart & Frozen Yogurt and I was very pleased with it.

My bill came to £105, £12 of which was a large glass of Malbec, I was a little shocked at the price of this, but I should have checked the menu before hand. 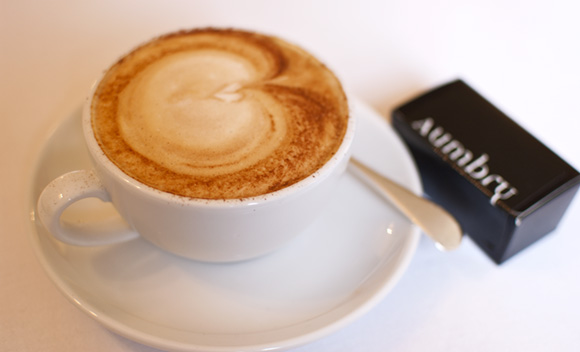 So was the £90 12 course menu worth it? I've been agonising about how to say this, but I have to be honest, or there's little point in writing these reviews, and say that for me it was not. Let me explain this. For me the food at Aumbry is better than probably every restaurant in the city centre, but when you're charging these prices, I have to judge it next to Michelin Star restaurants further a field.
For instance at two starred L'Enclume you can get a tasting menu with more courses for £95. The food really gives you the wow factor, which for me the food at Aumbry did not. I left there feeling a little bit disappointed and deflated, and I was trying to work out why. It surprised me that I felt like this, but I wasn't blown away. I think it's because I don't actually have limitless funds and £100 is a lot to be spending on lunch (it was of course my choice to go for the big taster menu, at lunch you can get 2 Courses for £20 or 3 Courses £24 which is good value.) But when you are spending £90 on 12 courses, expectations are much higher and sadly those weren't met. There's two things I really like when eating somewhere like L'Enclume. Firstly that 'wow' factor, (thinking specifically of the Oyster Pebbles for instance) and secondly that flavour intensity that you're not exactly sure how they achieved it. Sadly, I never got either of these at Aumbry. Perhaps it's unfair to compare one with the other, they are different styles after all.
But, I was working out that for £100 I could have gone to say Parlour my local decent bistro for lunch about 5 times or over to L'Enclume. For my money, either one of those options would be preferable, because the food at Aumbry I feels falls somewhere in between Michelin Stars and a very good local restaurant. Having said all that, I enjoyed the food for the most part, and the 5 courses on Tuesday for £25 is an absolute steal. I would definitely return for that. Price: I feel £90 for 12 courses a bit too expensive.
If I'd paid £70 I would have been happier. Aumbry does not yet have a Michelin Star, but these are Michelin Star prices. The French in the city centre is charging just £79 for 10 courses, we felt the food ambience and service was superior.
Service: Really lovely, friendly and informal.
Atmosphere: Local little bistro.
Food: Good.
Star dish: Honestly, the beef dripping
6.5/10 * As they price it the same as a Michelin Star restaurant I'm judging it as such.
I recently went to a 3 Star Michelin Restaurant in Bilbao. The chef introduced himself and gave us a tour of the kitchen. Yet it cost just £40 more than Aumbry. For half of my meal I was alone in the restaurant in Aumbry, despite this, the chefs (who could see me from the pass) never felt the need to come and greet me. They're busy of course, but I feel it is a nice personal touch that adds to the fine dining experience. After all I am spending £100 on lunch!

Follow @Bacononthebeech
Posted by Bacon on the Beech at 09:26