The Bacon Guide to Prague. 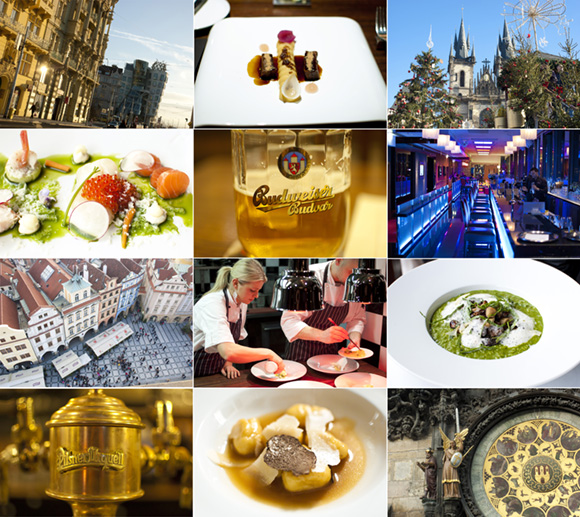 In between Christmas and New Year, we went to Prague. It was probably the most enjoyable city break we've ever done. Firstly, it must be one of the most beautiful of the medieval capitals in Europe, and if you go just after Christmas, the festive markets are still on, which seems to keep the season going longer (unlike in Manchester where they pack up days before.)
Prague used to be a wasteland for fine dining, not so these days. There are two Michelin Star restaurants, one of which La Degustation Bohême Bourgeoise, we were lucky enough to visit. The beer is legendary, and we visited as many pubs as we could, all in the name of research! I think U Pinkasu was my favourite. These beer halls serve the most wonderful ale, normally Budweiser or Pilsner Urquell, but they've not quite got that 'cosy' factor as Belgian bars do. Czech pubs are normally brightly lit, and perfunctory, perhaps a throwback to the communist era. It's not really in the Czech way to give 'service with a smile' either, so they can seem a little brusque if you're not used to it. Also, there's still smoking currently allowed in pubs, which is very strange coming from the UK, where it's been outlawed for some time.
Here's a map of the best beer halls, pubs and restaurants in central Prague. As we only had three days there, we decided to stay fairly central. Also on the map is our hotel The Maximillian, a lovely boutique hotel that's very central and is next door to the best restaurant in town, La Degustation Bohême Bourgeoise, and Lokal which is great for cheap eats.
To enlarge click the map below: 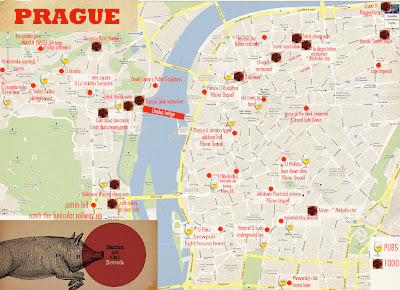 
Follow @Bacononthebeech
Posted by Bacon on the Beech at 14:17