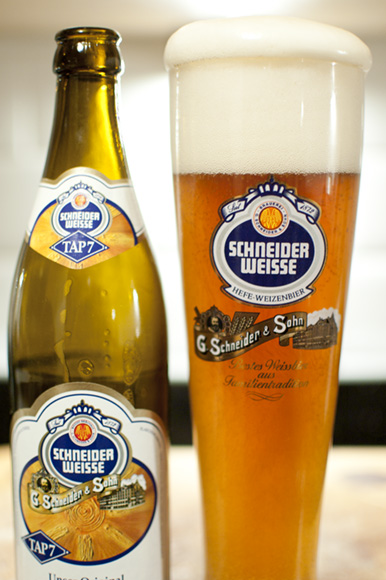 I distinctly remember my first taste of German Wheat Beer. It was about 1990, and I was living in a damp bedsit in Ladybarn. The local Safeway started stocking foreign beers and I tried loads of them. It was a Franziskaner, as I remember the monk on the label. I couldn't believe it when I tasted it, it really was a sensation. Why doesn't everyone drink this stuff? It tastes fantastic! About the same time, Tesco started stocking Thurn & Taxis, and I was hooked.
In the early 90's I started drinking my favourite of them all, Schneider Weisse Original (Tap 7) from Carringtons in Didsbury. Oh dear, that means I've been drinking it for 20 years. 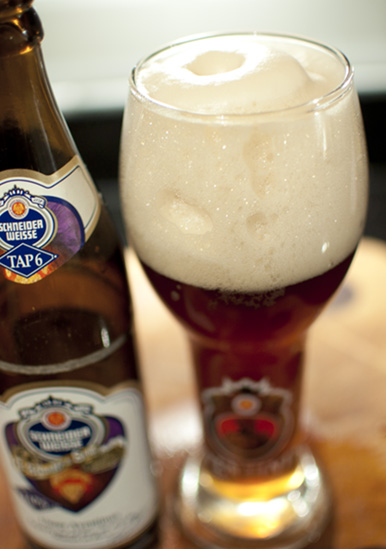 I went down to my local Chorlton branch the other day and picked up a bottle. For me it's still the best German wheat beer money can buy. It's unfiltered version of the style is darker than most of the brands. I really must learn to pour it with more care, it always has a massive head. That light fruity banana taste is so distinct to this beer. It's fresh and clean, so some how - German.
A few years ago, Schneider Weisse re-branded what was then simply called Aventinus (in an attractive purple bottle) is now called Schneider Aventinus Tap 6. Not sure why they did this, but anyway I also had a bottle of this for old times sake. It's a classic strong Weizenbock. It's dark brown, fruity and malty, still with some elements of that typical banana-ish flavour. It's a classic. For some reason though, it wasn't quite doing it for me any more. I think I've been so used to really strong dark Belgian beers that my palette has changed. Still a great beer though.

Bought from Carringtons.
Tap 7 The original is often available on draught from The Port Street Beer House & The Beagle.
Follow @Bacononthebeech
Posted by Bacon on the Beech at 18:57