I was in a right mood already, I'd got a hangover/headache from last nights wine, and we were summoned to meet 'The Queen', Mrs Bacon's relative. She refused our idea of award winning Sunday Dinner at local favourite Parlour as she doesn't like Sunday dinner (who on earth doesn't like Sunday dinner!) She insisted on a Chinese. We wanted to go to our favourite Ocean Treasure. She wanted to go to Pacific, as she had been there before. We suggested The Yang Sing as Manchester Confidential had recently reviewed it and said it had improved lately. She'd not heard of it. (Probably the most famous Chinese 'brand' in Manchester.) Then she said it was too expensive. How about trying Ocean Treasure? She relented. Then we found out that it was only open from 2pm in the afternoon and we were meeting at midday. Tai Pan was out and so was Glamorous, as Mr's Bacon's family would "never find them." Red Chilli would be too weird (we liked it.) So Pacific it was.
The catch all term we use for all of Chinese food is not my favourite cuisine to be honest, I find the meat and fish often of a poor quality, and I don't like the MSG, but I didn't grow up with it unlike Mrs Bacon. 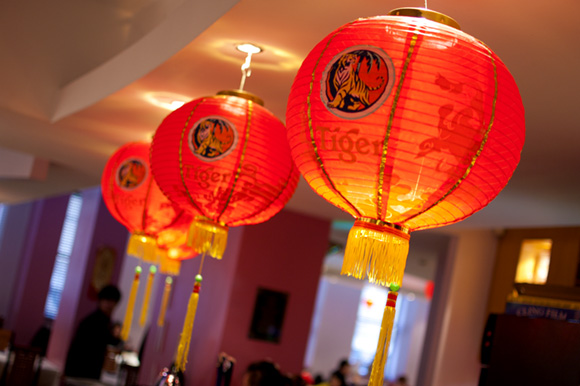 We entered Pacific up the stairs from the street in China town (less of a town more of a few streets really.) It appears that the old Thai restaurant on the top floor has gone now, I wondered if it had changed hands. Nearly every table was full - mainly of Chinese people - surely a good sign.

We went for Dim Sum. I was still in a mood....
I'd order a beer, that'd chill me out. They'd not got any draught any more, so I resorted to a Chinese beer. I think at the time I declared that it was f***ing  sh***.
If there is a worse beer in the world I've yet to taste it. One of the ingredients is rice - never a good sign. It tasted of abolutely nothing, beer for people who don't like beer.
After what seemed like several hours of The Queen explaining to Mrs Bacon's elderly relatives the idea of Dim Sum, and that no they could not have their favourite sweet n sour; we eventually ordered.
Mrs Bacon always has the Crab meat & Sweetcorn Soup, and she was very happy with it. My Hot & Sour soup was bloody terrible. Not hot and spicy enough and an awful gloopy quality with rubbery prawns.

An absolutely awful bowl of soup and tasteless at that. (I normally like this dish.)
The Deep Fried Chicken Spring rolls were fine though, as were the Steamed Prawn Dumplings. The Beef & Ginger Dumplings looked like brown little brains and were quite tasty. The Pork Belly & Mushroom Dumplings were ok, but my favourite I saved for last.

I always have the Beijing Aromatic Crispy Duck with pancakes. Mrs Bacon would only stretch to a quarter at £9, but it was pretty good.

All in all the Dim Sum was a fairly average choice but it was all quite cheap. The service was very slow and not particularly friendly. Despite there being hundreds of waiters milling round it was almost impossible to catch the eye of one. Many did not speak much English so it was tricky to ask them anything more than a simple order.
To top it all, I'd just spent £5 on parking on the street, I remember when it used to be free on a Sunday. We left The Queen and the elderlies and went to the delights of Aldi in Old Trafford….

Follow @Bacononthebeech
Posted by Bacon on the Beech at 19:52