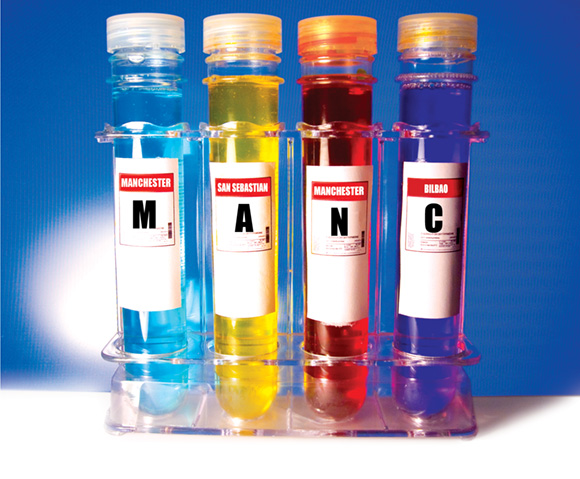 Last week Manchester Confidential's esteemed restaurant critic Gordo reviewed Etrop Grange, and gave it quite a scathing review. Along with quite a few other bloggers, we loved the place and the food of Ernst Van Zyl; see our review here.
So what is going on here?
I'm not going to doubt Gordo's credibility as a gourmand of many years (as others have), but I'm not sure he was ever really going to like the so called 'challenging' food of chef Ernst Van Zyl. As he says in his review, he would really just prefer: "a dish of pink lamb, "chips with crispy fat, and Michel Guerard's dauphinoise."
Fair enough. I think a lot of people in Manchester may agree with him there.
But we wouldn't, and here's why.
You can go to any number of restaurants in Manchester and eat a pretty good steak, (which we often enjoy as well, as did Michel Roux Jr at The Rosegarden,) but there's only one place you can get food quite like Ernst Van Zyl's and that's by the man himself at Etrop Grange.
The case for Ernst Van Zyl has already been argued brilliantly by Manchester Foodies, but I would like to add on a personal level, that of the 12 course taster menu we had, although there were a few dishes that we didn't think worked, there were several courses that were simply stunning and a few that were as good as anything we've had in the UK.
Perhaps Ernst Van Zyl is not a master of modernist cuisine as I'm sure he wouldn't claim to be, but he's a very talented and creative chef that we should be encouraging especially in Manchester, a city where true culinary creativity is currently a rare thing indeed. So who else in Manchester is attempting this type of cuisine right now? Until this years well publicised openings; absolutely nobody.
Londoners see our city as a wasteland when it comes to fine high end dining, they think we're years behind, and we currently are. Manchester Confidential often promotes restaurants and chefs that I feel have been churning out the same dishes for years and years. Here we have a chef that's attempting something very unique, ok so whilst he may not always succeed, when he does, he creates some truly fantastic food. In my opinion, it would have been better if Gordo had shelved his review and gone back in a few months to review again, surely discretion is the better part of valour? I'd guess Manchester Confidential is probably read by more people in our city than any other restaurant review website, (apart from perhaps Tripadvisor) and his article is damaging. It will put a lot of readers off.
There was also something else in the review that I'd like to question.
I would challenge the critic's assertion that there are 'no more than five who have succeeded as a master of Modernist cuisine.' Can this really be true?
I would say there must be at least 5 in the Basque Country alone that have succeeded as true masters, according to The Michelin Guide anyway. These would be Martin Berasategui, Andoni Luis Aduriz, Juan Mari and Elena Arzak, Eneko Atxa & Pedro Subijana. Or would he not class these chefs as modernist? Surely it would be splitting hairs not to. Let's suppose for arguments sake that they are not, Basque food is modern and it is very innovative. It's a unique place, and there are many complex reasons why the cluster of amazing restaurants have happened. But these are the 3 main reasons according to Juan Mari Arzak:
1. Recovering old dishes and recipes from traditional Basque cuisine. (Obviously this cannot be replicated.)
2. Preparing modern dishes with authenticity, improving them but constantly innovating. (When it comes to innovations, there has not been a greater influence on Basque Nouvelle Cuisine than the Godfather of Modernist food; Ferran Adrià. Just to pick a few: Andoni Luis Aduriz  of Mugaritz (Rated No.3 in the world) is an Adrià protégé. Juan Mari Arzak, (obviously of Arzak fame) who is considered the father of modern Spanish cooking states: "Ferrán Adrià is the most innovative man in the history of cooking." In an interview Eneko Atxa of Azurmendi (Gordo's favourite and our best ever restaurant experience) said that Adrià; "is one of the most important chefs given the techniques that he created.")
3. Publicising Basque cuisine throughout the world.
Looking at point 2; this constant innovation could be partly replicated elsewhere, but it has to be given a chance to start.
Ok, so the Basque Country is clearly an idiosyncratic place, and maybe we can't hope for anything remotely like that, we are essentially a drinking culture after all, but can't we just enjoy a tiny little bit of deviation for a change? Must we always stifle originality, innovation and creativity?
Obviously, and judging by some comments, a lot of people don't want anything different from the norm, that's fine as well, but for those of us who do, it's great to have the choice. Yes Ernst Van Zyl will hone his skills, and hopefully perfect his art, I'm sure he wouldn't claim to be at the level of these world class Basque chefs, but maybe one day he could be? Who knows?
Either way, I for one think we should be encouraging him.

Follow @Bacononthebeech
Posted by Bacon on the Beech at 11:56