We do pretty well for specialist beer shops in Manchester. For German stuff, I normally go to Carringtons in Chorlton, for my Belgian ales I go to Biercell in Altrincham or Bottlestop in Cheadle Hulme. But over the last few years, I've been reading about all the fantastic American beers online on review sites such as Ratebeer.com and BeerAdvocate, and also in a book I got recently The Beerbook by Tim Hampson which heavily features American Craft beer.
I was wondering, why is there nowhere to buy all these great sounding beers in our area? (With a few exceptions such as Sierra Nevada and Samuel Adams.) Why are the Americans not exporting it over here? Port Street Beer House have a good selection if I was out in the Northern Quarter, but there was nowhere I could buy this beer to take out.
Well it looks like my prayers have been answered with the opening of Beermoth on Tib Street in the Northern Quarter, (only just got the pun by the way.) When I found out about this place, I contacted the two owners on twitter, Jeremy Stull (previously of the Port Street Beer House.) and Scott Davies (previously manager of The Knott Bar.) As I was going for food at Luck, Lust, Liquor & Burn, could I pop in at lunch time even though they were not due to open till 4 o' clock?" Yes, no problem," they said. I missed the doorway at first as of course I'd forgotten to make a note of the address.
When I finally found it; it was like an Aladdin's cave for the beer lover. 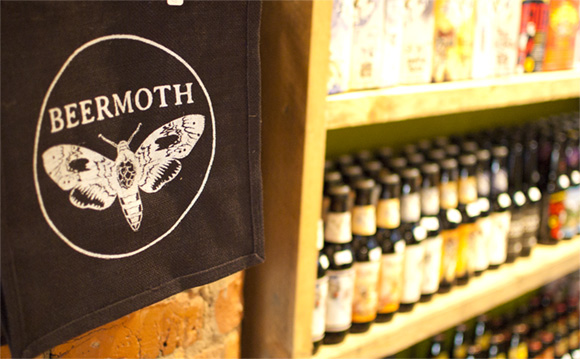 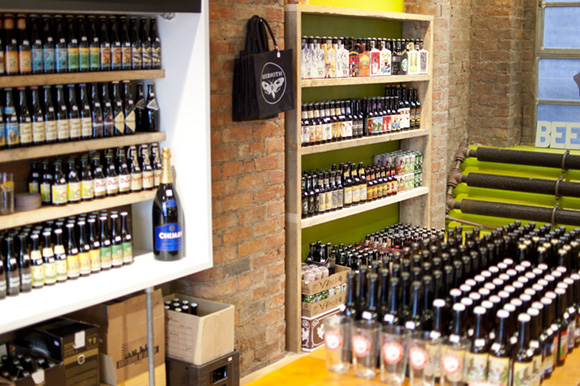 It's not just American beer they stock, there was a healthy selection of Belgian stuff: a good choice of sours (not for me) also XX Bitter in large bottles (a favourite) Duvel tripel hop, Houblon Chouffe IPA (another favourite) a good selection of Trappist; the 3 St Bernardus Prior's & 3 Trappist Rochefort's, 2 Westmalle - all fairly easily available, but more interestingly some rarer gems, the superb Struise Pannepot (I've never seen this beer in this country,) and Petrus Blond & Brune (ditto.) I also spotted Urthel Hop it (last drunk by me in Delirium in Brussels.) And a recent nice find Jambe de Bois. These beers don't come cheap as quality never does, but they have Trappist beer Orval at £2.90 which is very reasonable. On the table in the middle they had a good range of Norwegian brewers Nøgne ø (see my review of their Winter Beer here.) 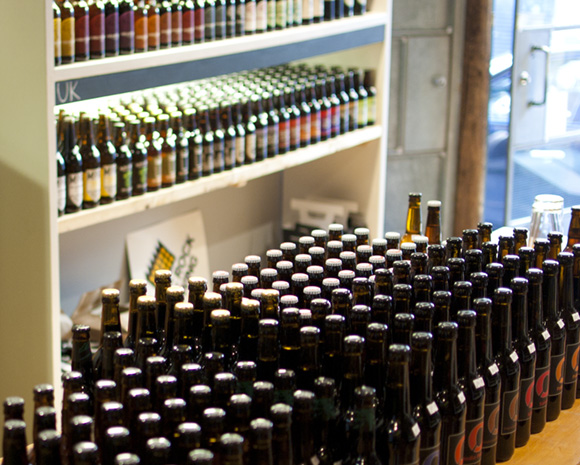 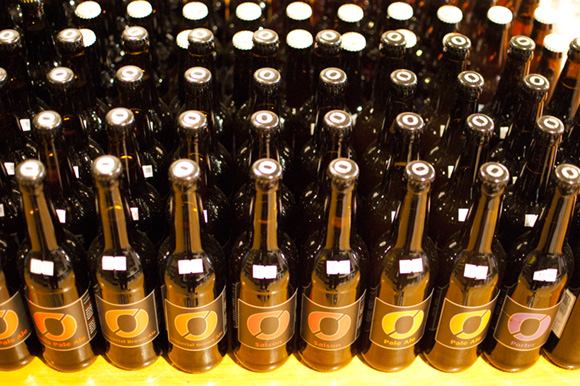 On the other side there was the British real ales such as Redwillow & Thornbridge, including kegs of Jaipur IPA & Kipling to take away for £27.
Looking at the choice they already have in, it was hard to make a decision on what to get! I decided on a couple of favourites, I couldn't resist the Orval at  £2.90, and I also went for De Molen Vuur & Vlam for £3.50 as I just love this beer. 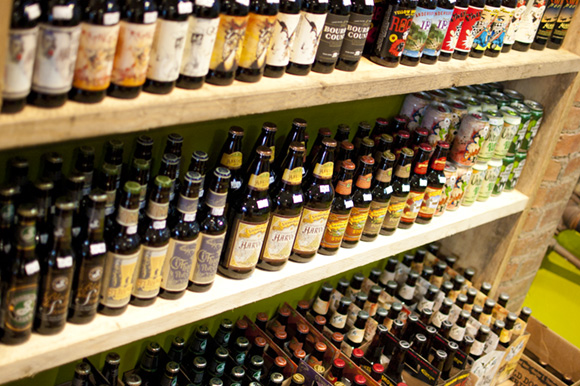 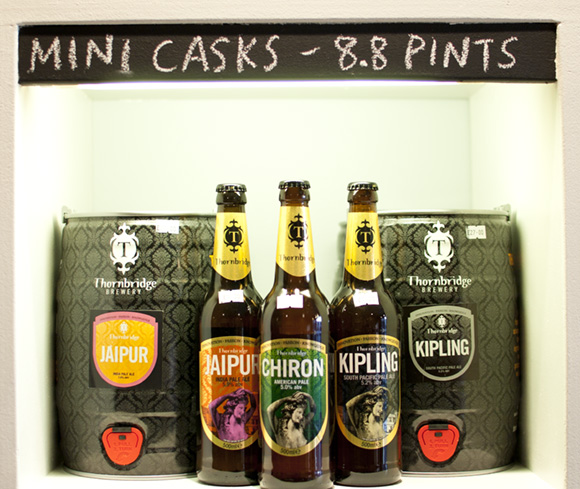 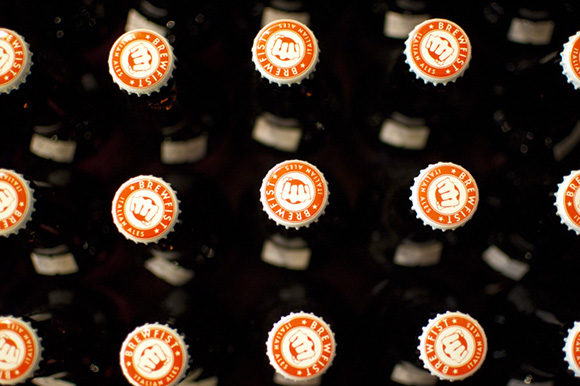 I chatted with Jeremy about what American beers I should go for (I had a big list as well.) This guy really knows his beers, time spent in Holland and of course Kansas where he's from (where I believe there's a big craft beer scene) has given him a unique insight and knowledge about both European & American beers. His knowledge and enthusiasm was infectious, so I let him help me choose 3 IPA's. Here's what I bought: 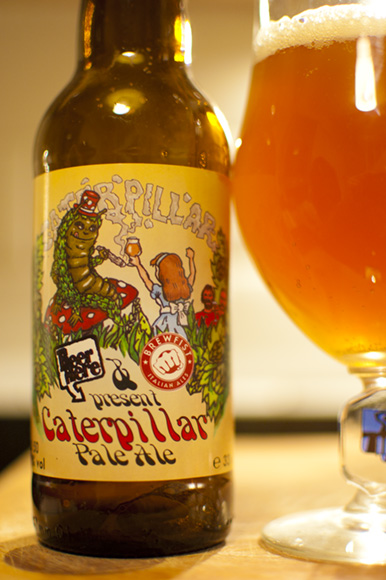 Brewfist/Beer Here Caterpillar Pale Ale. (£3.75) A unique collaboration between Italian brewers Brewfist & Danes Beer Here. Not made by Americans but in the US pale ale style, this poured a cloudy orangey colour, amber and fresh with that typical dry tropical grapefruit bitterness, it was a real winner with me.
ABV: 5.8 %
Score 8/10
Next I sampled the Snake Dog IPA Pale Ale, (£3.40) which was actually recommended to me in a tin. Softer than the previous beer, this was another superb effort. It wasn't quite as bitter or citrusssy as the Caterpillar. Still hoppy though, but with slightly more caramel, I could easily sink several of these as it was nicely balanced.
ABV: 7.1%
Score 8/10 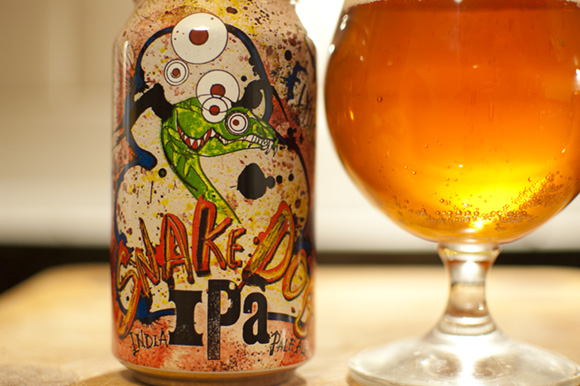 Lastly I drank the Rogue Yellow Snow. (£4.50.) I'd saved the best till last.  It was an absolutely superb IPA, again it poured a cloudy orange, it's big and fruity and hoppy, complex but clean and fresh. It has that tropical fruit element, but it's not too bitter as some of these 'hop monsters' can be. One of the best IPA's I've ever had I think.
ABV: 6.2%
Score 9/10 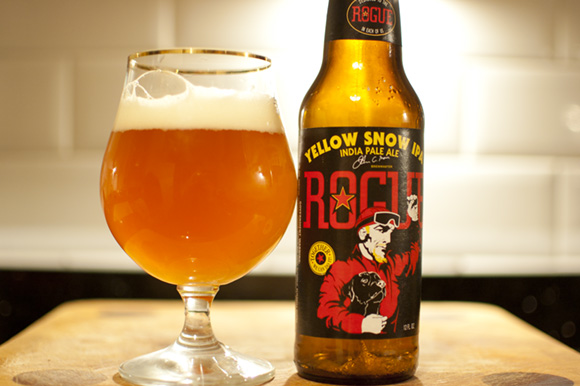 My purchases were the first thing through their till, a little fact that I'm strangely proud of. The best thing is, they promised a huge stock of new beers which will be arriving hopefully this week, so I'll definitely be back for more.


Follow @Bacononthebeech
Posted by Bacon on the Beech at 19:32