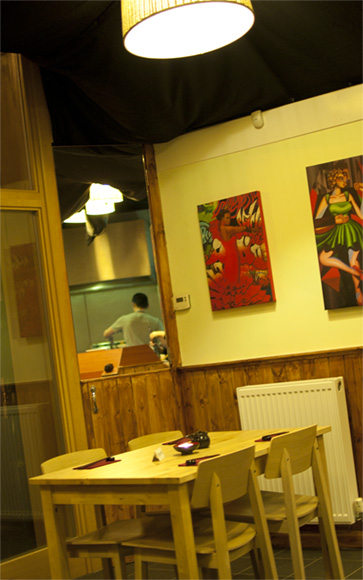 You're unlikely to find Umezushi by accident, situated as it is, in what you'd expect to be a lock up garage under the arches in a back street just off the main road to the MEN arena. Indeed, we hadn't found it by accident. We'd been given the heads up again by Mrs Petticoat, who highly recommended it, so I knew it was going to be special.
Mrs Bacon, Dr Gambas and myself were meeting Ms. Arroz there who was stuck on the train from London which was delayed due to the snow. It was freezing outside, but we were given a warm welcome by both charming waitresses and the affable owner, Terry. It's quite simple inside, and we settled in the table by the radiator to keep warm and watched the sushi being made in the open kitchen. 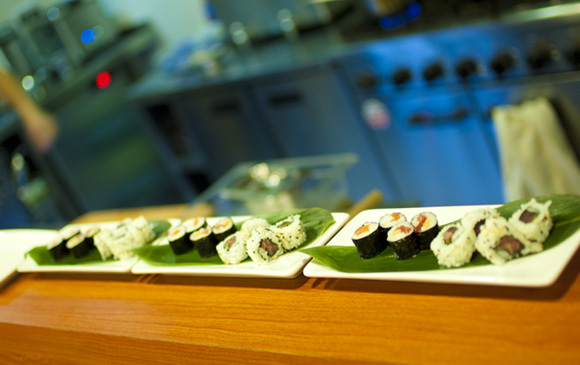 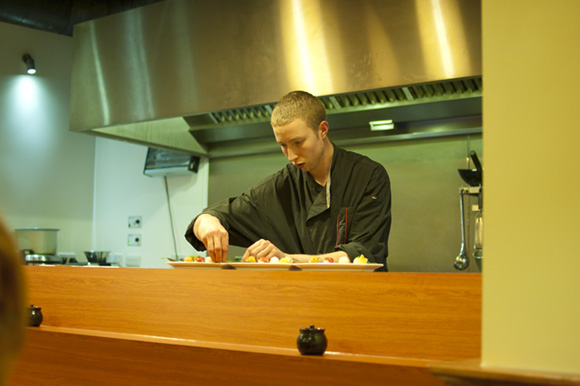 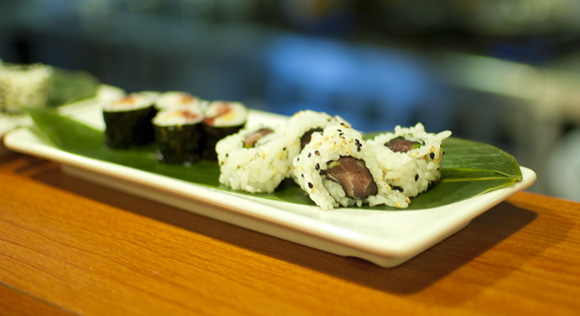 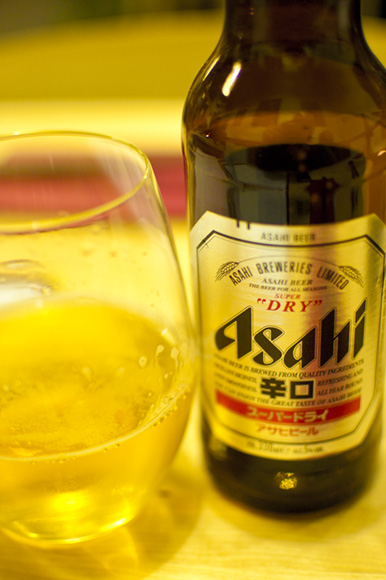 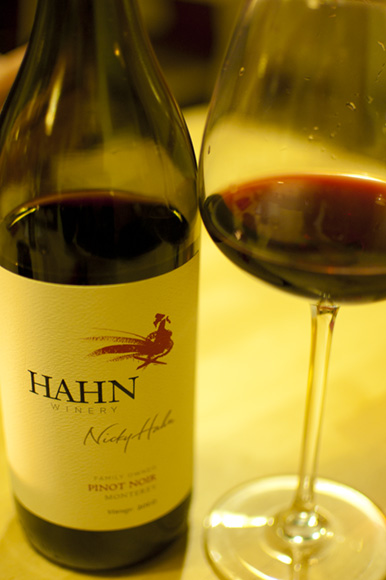 I was gutted that they'd run out of Estrella Inedit Beer (made with the assistance of the godfather of modern cuisine Ferran Adrià.) As I've not tried it yet, and as it was half price happy hour till 7pm, this beer would have been cheaper than you could buy it at in Waitrose! (Normally on this menu it's £9.50 for a large bottle)
However I was placated with a few bottles of bland but clean & cold Asahi.


Dr Arroz started on a really lovely bottle of Hahn Estates Pinot Noir from California. We waited chatting and drinking......


Then Ms. Arroz texted that she was delayed again, so we finally started on the taster menu (£38, but the price may vary depending on what's fresh that day.) We were here for the sushi and it did not disappoint. The Maki Selection was superb so fresh, clean and delicate.
The fish was sourced from Chorlton's own Out of the Blue and was the best sushi we'd had in a restaurant since Chisou in London. We were joined by Ms Arroz who despite being on a train for five and a half hours was in great spirits, and she caught up with the food (and wine) in no time. 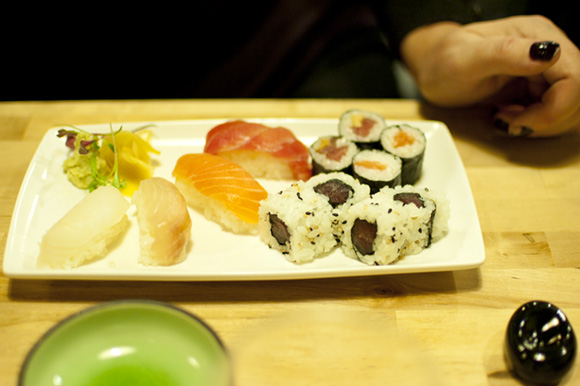 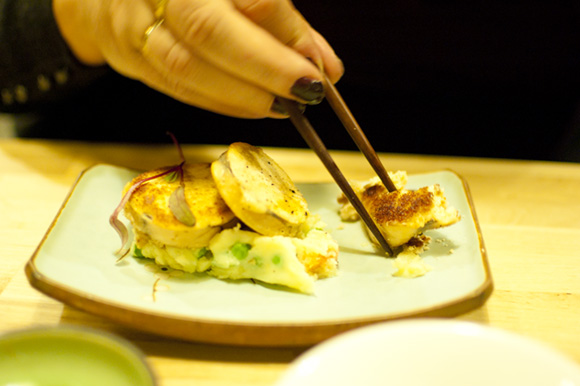 The Sashimi was delivered on a bed of cold ice and was of very fine quality, as was the Nigiri. (lemon sole, sea bream, salmon & tuna.) 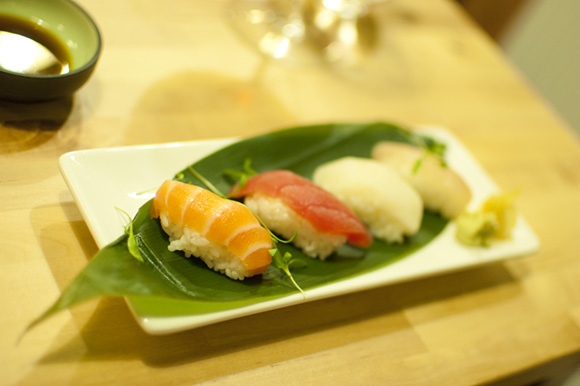 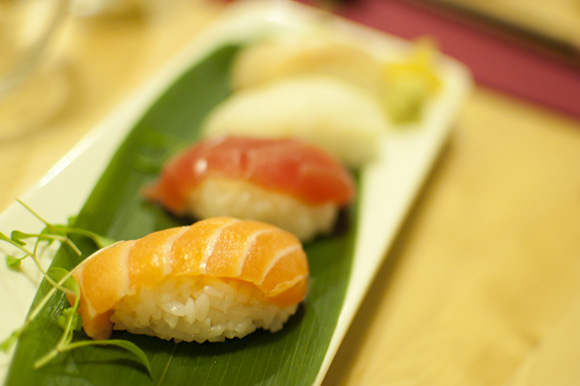 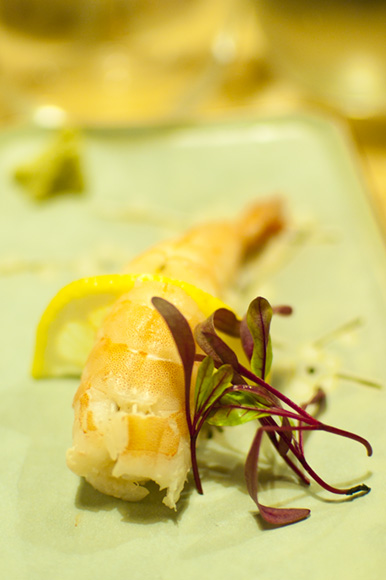 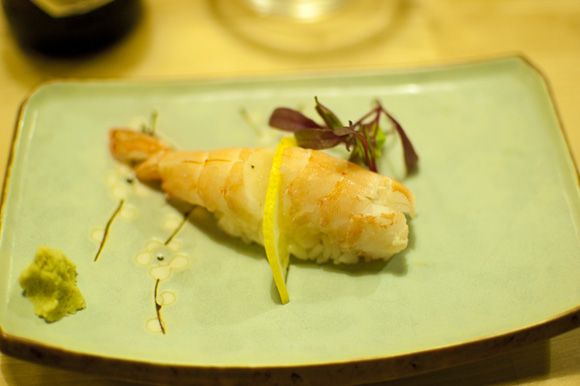 I wasn't quite as into the Russian Salad and Cod Roe, but The Tempura was excellent, light and crispy.

The Miso soup which came at the end was warm and hearty but a little over salted for me, but then I tend to under-salt food at home.

I liked the Pork Cheeks although the sticky and sweet style is always a tad too sweet for me. Mrs Bacon loved them, declaring them juicy, tender and tasty. She was gutted to be handing them over as she was struggling to finish.

There was loads of food, Dr. Gambas had a huge bowl of seafood soup with udon noodles which she couldn't possibly finish. The dessert was a very nice Pineapple & Pear Tart, I wolfed mine and half of Mrs Bacon's in a blink of an eye.

We all had a great time at Umezushi, all the food on the taster menu was good, but the real piece de resistance is the sushi and sashimi. This stuff makes YoSushi look like McDonalds.
It's only been open since October, and although I'm no expert on Japanese food, this is certainly the best sushi we've had in Manchester. We said our goodbyes to the lovely staff and went out into the freezing cold night air, very pleased with ourselves for finding such a little gem. 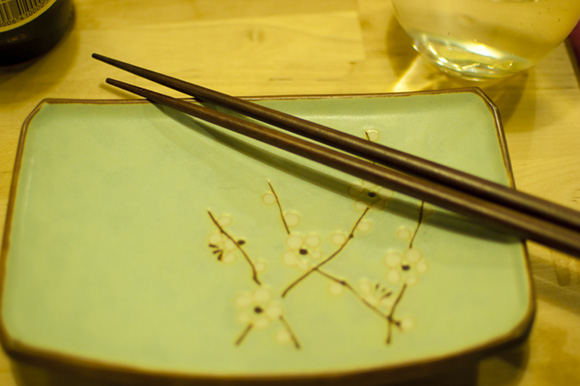 Price: From £30 for the taster menu, amazing value for the amount of quality food.
Service: Very friendly.
Atmosphere: Small & simple, every table was taken when we dined there.
Food: Best sushi we've had in Manchester
Star dishes: All the sushi & sashimi.

Follow @Bacononthebeech
Posted by Bacon on the Beech at 09:34