I have an ongoing debate with my mate, fireman Rick. He reckons that the best kebabs in Chorlton are to be had at Turkish Delight, I traditionally favoured Panicos opposite. Mrs Bacon always has the halloumi kebab from there and I like their large donner. (especially after a few beers.)
When the news came out that Turkish Delight had won Best Kebab in the whole of the UK, (out of 17,000 entries) at The British Kebab Awards it seems like he'd won the argument. But he was away skiing in Switzerland, no need to tell him was there? Within the hour I'd got a gloating text! Damn the wonders of communication! So I had to concede defeat and decided to get a take-out for my tea on Friday night. (*Please note southerners it's not dinner or supper - 'tea' is our word and I'm claiming it back!) 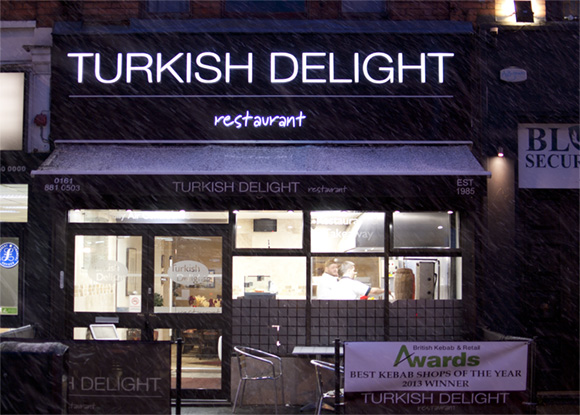 The first thing you notice, (as Rick always says) is how sparkling clean everything is. I asked them for an award winning kebab, and they said they all were. So we settled on a Chicken mix: Special chicken, chicken breast and chicken kebab which I had on a nan bread. (£6.20) Plus a Mixed Lamb on a nan: Donner, shish and Kofte.(£6)

I was chatting to them about the awards, they had to go to the Houses of Parliament for the presentation. It was wonderful of course, to get the recognition, but they've been doing pretty much the same thing for 30 years, and their motto on food is to keep it simple, (always a good move) no additives or colourings, just good quality meat which is all Hallal, sourced 30 miles away in Stoke on Trent.
I also had a little tour of their restaurant at the back which looks much smarter than I remember it. They were rightfully proud of their award and had the certificate pride of place in the smart little dining room. (There's also a downstairs room as well.) 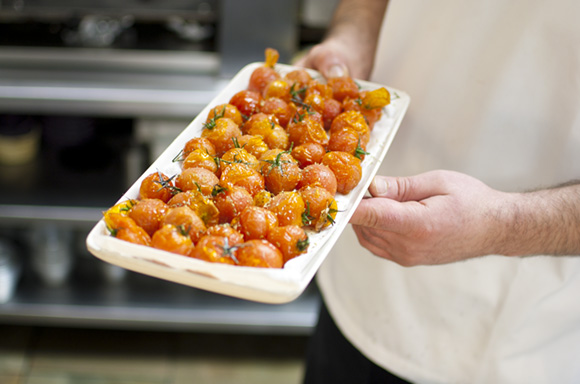 The restaurant food looks like it's stepped up a level as well since my last visit. It was always great of course, with simple grilled meat from the front of house, but looking at the photos it seems like they've taken a look at the competition and decided they can do better, with a slight modern twist in presentation. (It's a pity Olive & Thyme didn't take a leaf out of this book, after that days disastrous expensive lunch there.) I think we'll be back to eat in. 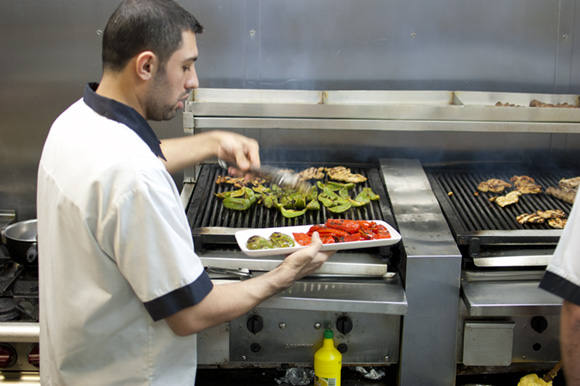 We drove home in the snow with our precious warm packages, leaving a big queue behind us.
I can report that both kebabs were fabulous, I love the char-grilled taste of the grilled chicken and the lamb kebab was a big meaty treat. I still like the way Panicos grill their donner meat, but to be honest there's not much between them, they're both really good kebab houses.

So Chorlton now has the best Sunday Dinner in the UK (Parlour: review coming soon) and now The Best Kebabs in the UK, plus The Beagle was recently in the Top 50 Best Sunday roasts in The Independent.
Yes I think this is going to be a good year for food in Chorlton and Manchester, and I for one say bring it on.

Follow @Bacononthebeech
Posted by Bacon on the Beech at 12:10