It was about 11pm, I'd had a couple of beers, and was nicely drifting off to sleep. Mrs Bacon woke up with a start, "I've left my handbag in the pub!" she cried.  She ran round the corner onto Beech road and into the pub. Luckily somebody had handed it in.  It was waiting for her behind the bar. I knew that this would happen, The Beech is that sort of place.

We've been drinking there for several years, friends of ours we often meet there have been going for 20. It's had it's ups and downs. When we started going it had surly staff and the most incompetent landlord ever, he literally could not organise a piss up in a brewery. One night he ran out of beer, out of all beer, in a pub! Thankfully, when the new landlord took over, things started to improve straight away. The old ner-do-wells left for pastures new, but the old Chorlton regulars remained, and new ones arrived. The Beech has a totally different clientèle to the Horse and Jockey. There is no piped music or large screen TV. They have a darts board. It's my sort of pub.
I recognise the same people in there, the lovely couple who'll do a fine job on your garden, smoking outside, the fella with the lab who eats a whole bag of pork scratchings (the dog not the fella,) and I think it may have been Frosty the butcher propping up the bar last night with a pint of Guinness.
It reminds me of the pub in Early Doors the wonderful underrated comedy written by Craig Cash and Phil Mealey.

They always have my favourite real ale Timothy Taylor Landlord on, plus Mrs. Bacon's choice TT Golden Best.  I counted 9 handpumps on now, which on last nights visit included the two Timothy Taylor ales, Bah Humbug, Old Rosie Cider and Black Sheep. The rest were on the other side of the bar where there was a private party, but I think they included Dizzy Blonde and Copper Dragon.* 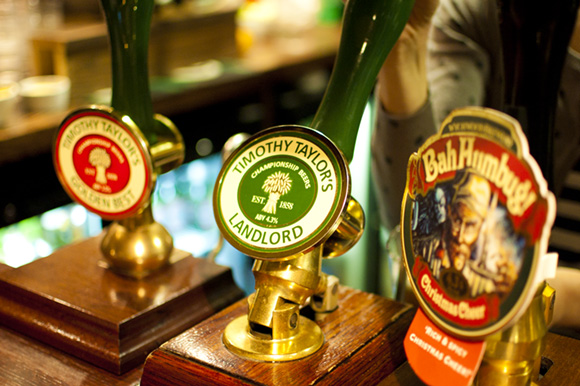 They've made quite a few improvements of late, the new(ish) colour on the outside is spot on, and they're currently decorating the inside. Like all the best pubs, it's dog friendly, and the staff are all lovely, they often bring Sam the collie a treat or a bowl of water. Like I said, it's that sort of place.
The only thing I hope they improve is the cosy factor. The front room where we normally go is quite stark. It'd be nice if they lowered the lighting, and put the fire on for that real homely feeling, perhaps some candles. And maybe add a few decent wines for some other friends of mine who for some reason choose to share bottles of red instead of drink the fantastic beer.** 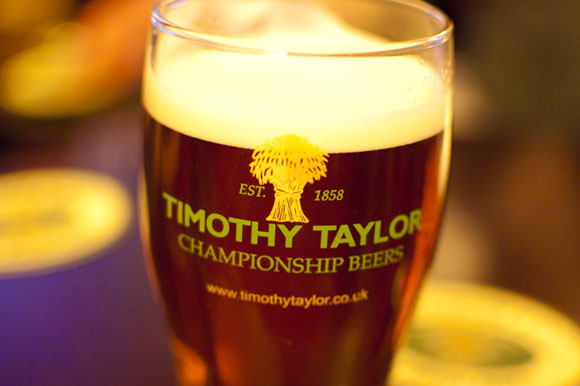 That said it's about a perfect proper pub as I can imagine. The don't do food, only crisps, scampi fries and bacon fries, although they started stocking very nice looking pies from All about Pies. I tried a cheese one last night, and it was lovely, a real bargain at £5 with a pint.
There's not much more I can say about The Beech, it's my favourite pub in Chorlton, and my local. It's a place I can feel at home in.

*  They also apparently have Robinsons Old Tom, on gravity cask on the side
** They are advertising a wine list now, so it looks like they've already added a wine selection.


Follow @Bacononthebeech
Posted by Bacon on the Beech at 11:21