We have quite a few Turkish restaurants in Chorlton. Saray, Nectar Bistro (actually Lebanese but similar food) Turkish Delight and Panicos. The latter (my favoured place for take out kebabs) have opened up a Mediterranean restaurant a few doors down.
They've done a fairly good job of the conversion, I liked the exposed brick work and a log burning stove made the place lovely and warm on my visit on a very cold quiet January lunch time. Mrs Bacon wasn't with me, but I know she'd not have been happy with the chairs and tables too close together. It's one of her pet peeves. 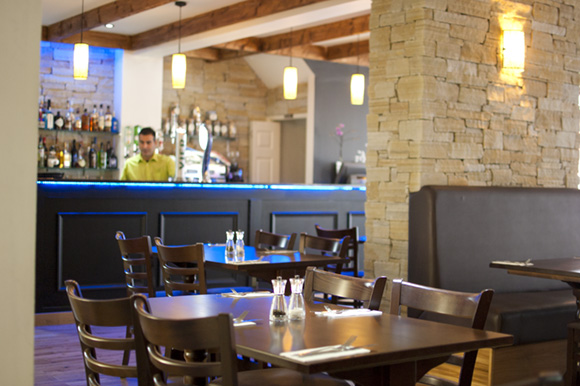 It has an uninspiring pizza/pasta menu, but when I went in for lunch I ordered meze as I figured that would be the best. They recommended a Hot Meze Platter (meat version) for two. Fine, I thought I can take some home for the Mrs. I also ordered a Lavas bread which was good and came with 2 tasty dips.
The starter came, and I was dismayed. For £12.90 I got a medium sized plate which would just about feed one (a greedy one like me anyway.) I would realistically price it at about a fiver. There were two meatballs (nice and home made) 2 samosas (ok) 2 Halloumi in breadcrumbs (ok, tasted a bit processed) and 2 little flat spicy sausages (fine.) Nothing irritates me more than tight portions. Nearly £13 for that, are they having a laugh?

This is the thing with Turkish food, I really like it's simplicity but it's the easiest food to make and seems over priced whenever I eat it, and I'm afraid this was no different. You'd have thought with so many others in the market place, that they'd want to competitively price their menu.
Worse was yet to come though. As it was lunch time, I ordered a half of Peroni beer, then as I often do, I ordered another half.
The bill came. On the bill was 2 halves of Peroni at £6.80.
I queried it. Surely it was some mistake on the new till.
That would make a whole pint £6.80. "No sir, a pint is £4.40, but a half is £3.40."
"But this makes it the most expensive pint in Chorlton, if not Manchester." I spluttered!
They showed it to me clear as day on the menu.
I know rates are high and restaurants have to recuperate costs. And I know they make money on booze, and I know Peroni is marketed as an expensive luxury beer (for some reason.)
But I'd just spent nearly £7 on a pint of bland cooking lager at lunch time.
Despite it tasting like nothing, it left a bitter taste in the mouth.
I really wanted to like Olive & Thyme, I'm a fan of Panicos but I'm sorry to say that they will have to do a whole lot better than this to make me want to return.

Price: £20 for one for lunch. Terrible value. Considering a fine dinner at last nights Gorilla was £30, for 2 with drinks! And that's in the city centre.
Service: Fine.
Atmosphere: Quite a nice conversion, quiet when I went.
Food: Ok, standard Turkish.
Star dish: Lavas bread
3/10 (Would have been higher if not for the 'Peroni' incident.)

Follow @Bacononthebeech
Posted by Bacon on the Beech at 15:33