Belgian Tripel is my favourite style of beer. It's normally a strong complex pale ale, the classic of the type is Westmalle Tripel, a beer which is the benchmark and originator of this unique style. I've enjoyed quite a few tripels over recent years, my favourites including Tripel Karmeliet, St. Bernardus, St-Feuillien, Corsendonk, Guldenberg, Watou, Jambe de Bois and Gouden Carolus.
So it was with great interest that when looking to spend some Christmas vouchers in Marks and Spencer, that I saw that they've got a new Belgian Tripel in a large bottle and small bottles of blonde and dubbel.
They had similar Belgian beers a few years ago until they disappeared without trace. The large bottle of tripel this time was not competitively priced at £10. You can get the same size of an Abbey St. Bernardus tripel for about £7 - £8!  However in the name of research I bought it, as it is brewed by Huyges that make amongst others the famous Delirium (as were the ones revamped in 2009.)
It comes in a nice looking box and is corked like the large Leffe is.
I poured it into a St Bernadus glass. 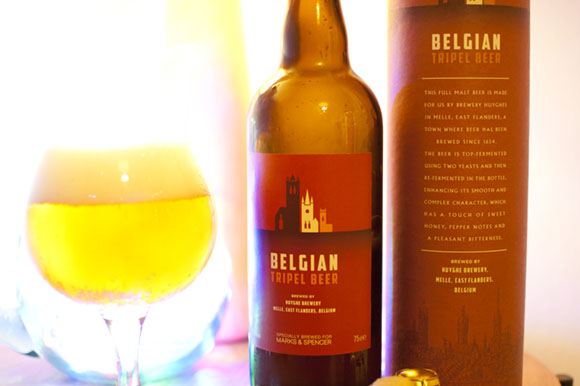 It tasted very similar (though not exactly the same) to a Leffe blonde. Strange, I remember the older version tasting better than this, or maybe I've drunk a lot of very good beer in the meantime. Let me remind you, this beer is £9.99 for 75cl. It's nowhere near complex enough for a proper tripel, it tastes similar to Leffe blonde, which is currently £2.70 for the same size bottle in Tesco's.
Quite why M&S think people will pay almost 4 times more for a similar tasting beer is beyond me. Well they may do once, but not twice. I know I won't.
It's a real shame, as not everybody in the UK is lucky enough to have access to this kind of beer as we do in Manchester, as most supermarkets in the UK don't stock it.*
It's a decent tasting beer, as is Leffe Blonde, but £9.99 is daylight robbery!  This is not the first time I've noticed M&S do this. I don't drink a lot of white wine, but I enjoy Torres Viña Sol when in Spain or the occasional sunny day in the UK. I bought a bottle of M&S own brand that was advertised as made by Winemaker Luis Marin Torres.  It tasted exactly like Viña Sol, but it was £2 more than the branded product! I know it's Marks & Spencer and it has that badge of quality (I am a fan of their food and wines in general) but some of their pricing is way out, especially when people are feeling the pinch.

The little bottle of Belgian Blond priced at £2.79 was even blander. Ok as an entry level Belgian beer for those who never tried it before, it's clean and fresh and a little fruity, but for me very dull.  But then again, they're probably trying to aim for the mainstream, which is maybe why they've made it bland enough to suit everyone's palette. But I can't imagine this beer will be really loved by many. Sadly, I can see this range disappearing without trace as the others did.

So in general a big thumbs down for the new Marks & Spencer Belgian Range.
Overpriced and under flavoured.

Belgian Tripel Beer 5/10
A decent enough beer but not complex enough for the style and not great value for £9.99
Belgian Blond Beer 4/10
Ok but bland & blonde. Your average lager drinker would probably find it fairly inoffensive.

If you live in the North West and want to try some of those top rated Tripels listed at the top of this article, they are available at Biercell in Altrincham or Bottlestop in Cheadle.
* Waitrose stock the wonderful Tripel Karmeliet. Follow @Bacononthebeech
Posted by Bacon on the Beech at 09:17