It's so grim at this time of the year I start thinking about holidays and Summer.
Making tapas trails is one of my favourite things to do if we go to Spain. The tapas are of a much higher standard to the UK as you would expect, but then I've found so is the food at your average restaurant. Valencia Spain's third city for instance has 13 Michelin starred restaurants in it's small region. Manchester in comparison currently has zero. It's not just about high end food though. I've found cheaper restaurants, beach bars and tapas bars are generally of a higher standard as well.
'La Marcha' is very much a typical event in cities and towns all across Spain. I always think of it as literally 'marching' from one bar to another, trying the squid in one, and knowing this one does the best snails etc. Spanish people tend to eat tapas as little snacks on the way to a restaurant, or go to many different bars in an evening. There are traffic jams in Madrid at 2am, everybody is out, and they all want to eat & drink all night.  Eating & drinking is so intrinsically linked in a way that it isn't in the UK with our drinking culture. Food is eaten to stop you getting drunk and beers are small; it's not the done thing to be seen to be too inebriated and out of control. Food appreciation is not just for middle class food snobs, it's for everyone, and pretty much everyone is interested in eating well. 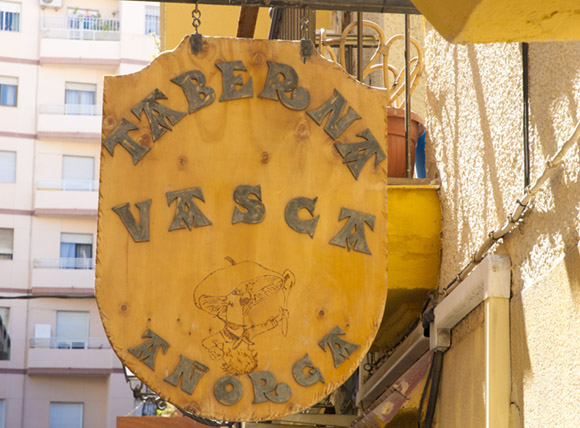 A few years ago we found Taberna Vasca by accident on a tapas tour of our own in the provincial southern Andalucian town of Almeria.
I had a feeling it was going to be good as I'd heard so much good stuff about Basque tapas: Pintxos.
We ordered a few dishes, not always knowing exactly what we were ordering as it was in the Basque language on the blackboard.  After we ate it though, we kept ordering more and more dishes.
The food was so good, so incredibly inventive and tasty yet unbelievably cheap for what was Michelin star restaurant type inventiveness! We just couldn't believe it! 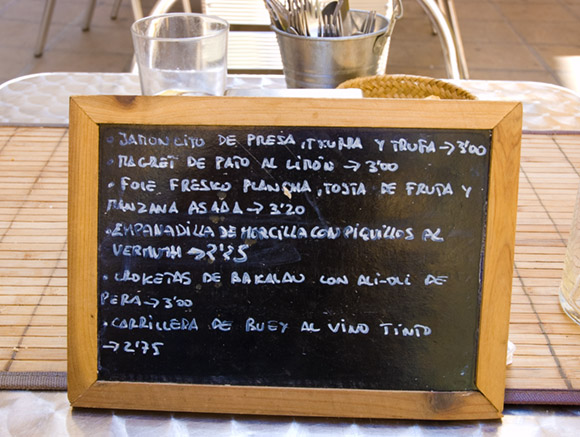 Returning a few years later, we took a load of friends all food lovers,  I was nervous, was it as good as I remembered? Would they agree with us?
The answer was a resounding yes! We were all totally blown away.
Nobody could believe that for the price of €3-4 euro per small pinxto we could eat food this inventive and technically brilliant, but most importantly of all, so delicious.
We've all eaten in top end Michelin starred places and the food here was at times better than those, (more enjoyable than at the 2 star Le Gavroche in London for instance and for a whole lot less money.)

I love Spanish food, and I must have been to 100's of tapas bars all over Spain over the years, Madrid, Barcelona, Seville, and recently San Sebastian and Bilbao,  and this still rates as amongst the most memorable.
Dishes such as foi, black pudding pie, (Spanish 'morcilla' is better than English black pudding in my opinion), cod crocquetas, and the pièce de résistance - egg and chips - but not as you know it - all stay long in the memory. 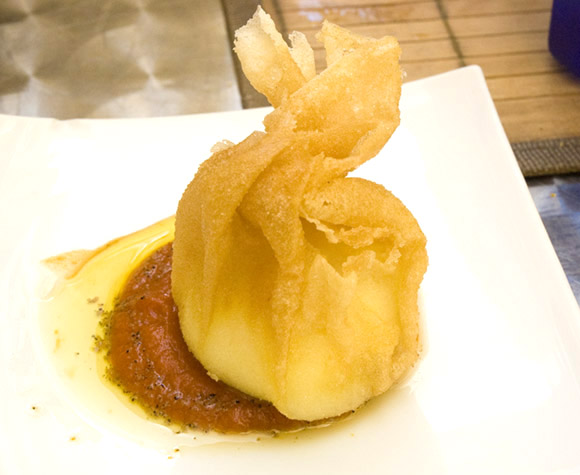 The staff are sweet but don't speak a lot of English, (so a little Spanish is useful) and the chef really understands food, but if you don't know what a dish is just order it anyway, it's bound to be stunning! On a couple of sittings I think we had nearly every pinxto on the menu. I ended up nominating it on TripAdvisor as I loved it that much, and I thought it odd that at the time there was very little mention of it on the internet.
Restaurants with this sort of flair and creativity usually comes with a hefty price tag in the UK, and over here, tapas is often the usual suspects, bought in bulk from a supplier, but this place was a special find, amazing food and such unbelievable value.