I recently watched Jamie & Jimmy's Food Fight Club, you know the one where Belgium trounced the UK at making beer in a taste off?  It was inevitable wasn't it?
However the funny thing is, some beers are made elsewhere like in Great Britain & Ireland (such as Scotch ale) and exported over to Belgium (and the Netherlands) especially to suit their tastes. As they are true connoisseurs a better quality product is often the result.
Such is the case with Guinness Special Export (Belgian version) It's made in Dublin of course exclusively for Anthony Martin descendant of English brewer John Martin who first exported it to Belgium in 1912. So we have the daft situation of Ireland exporting it to Belgium and it then being importing back to the UK! 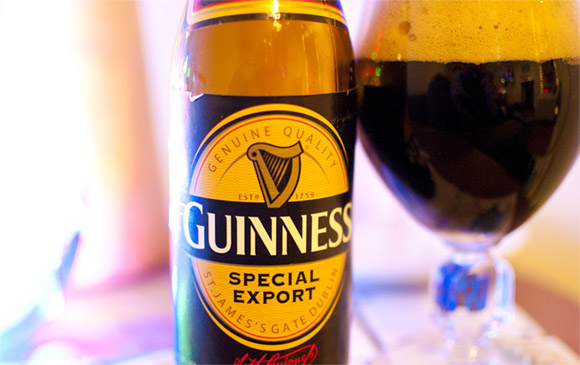 I was sceptical at first, I've had stuff before and it's not been discernibly different from the original. But I enjoy the occasional Guinness so I bought a few bottles from BierCell in Altrincham. Wyn the owner of Biercell was telling me in his bar Mort Subite how much different it was to the standard quite bland pasteurised version you get everywhere now, and that this tasted like Guinness apparently used to be.
I'll be the judge of that I thought. 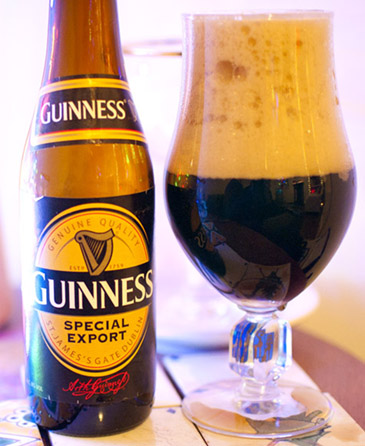 Well he was dead right. It's absolutely gorgeous, like a proper stout should be, it poured jet black with a large creamy head.  It has way more complexity with notes of espresso and dark chocolate, (it is 8% in alcohol) but it's extremely drinkable at the same time. It maintains that creaminess of the original Guinness, so it might not be enough for those beer lovers who like the new breed of dark chocolate monster stouts, but I thought it to be absolutely delicious.
It's amazing they don't sell this over here as a luxury brand.  I saw one critic call it a Guinness on steroids, which describes it perfectly.

Luckily we can get it from Biercell & Mort Subite in Altrincham.
If they're out of stock, they'll import it for you.
Bier Cell, Altrincham WA14 1R
Mort Subite 28-32 Greenwood Street Altrincham, Cheshire WA14 1RZ


Follow @Bacononthebeech
Posted by Bacon on the Beech at 08:58